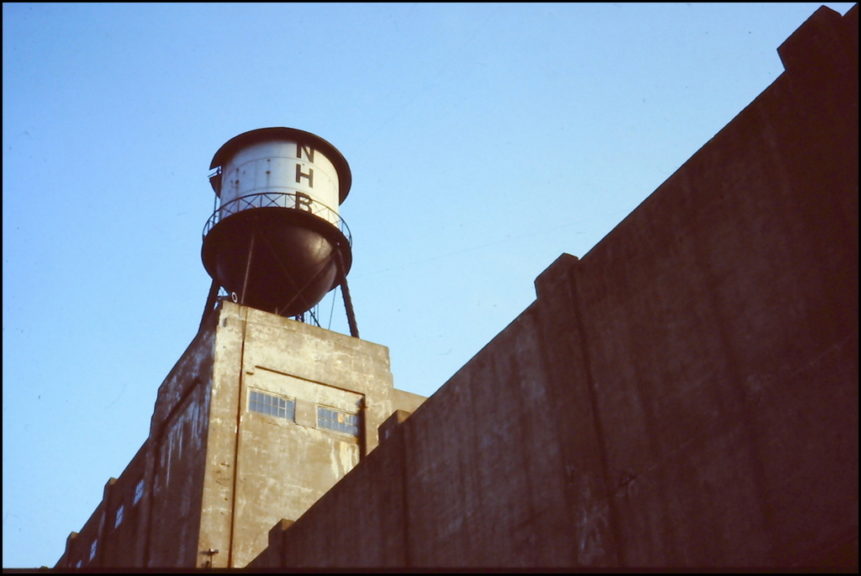 In 1980 the Halifax waterfront we flock to today was still a big, vacant mess. To the south was the real working seaport, and even it felt a little run down around the edges. One afternoon in the fall of 1981 (probably), I visited the Seaport/Ocean Terminal and snapped some photos of what was going on. 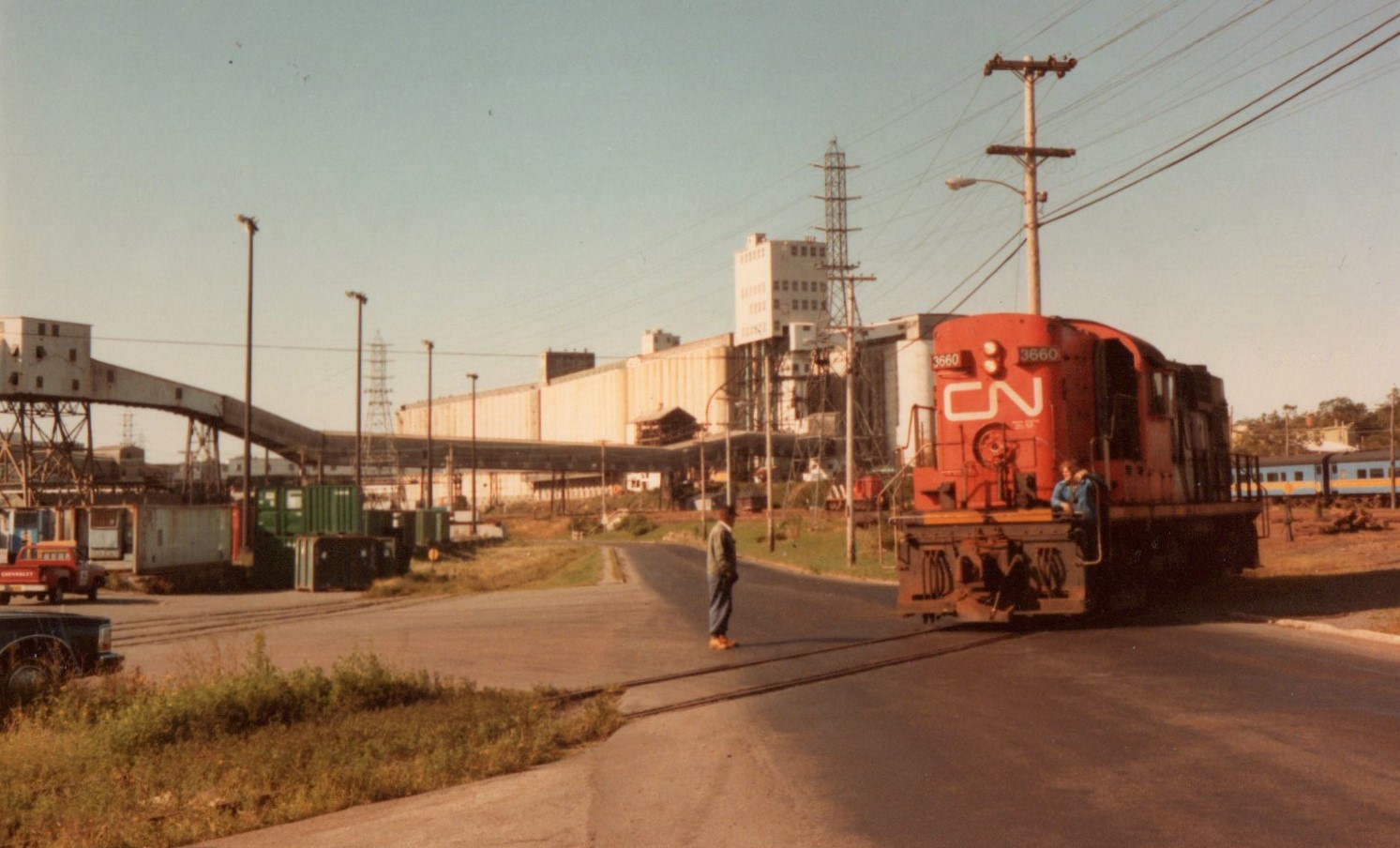 The grain elevator and its associated structures have always been enigmatic: a five-story building that floats on a light steel structure, those long passageways snaking to the piers. The mountain ash tree with a bountiful crop of orange berries would not have been included in my photo by accident. 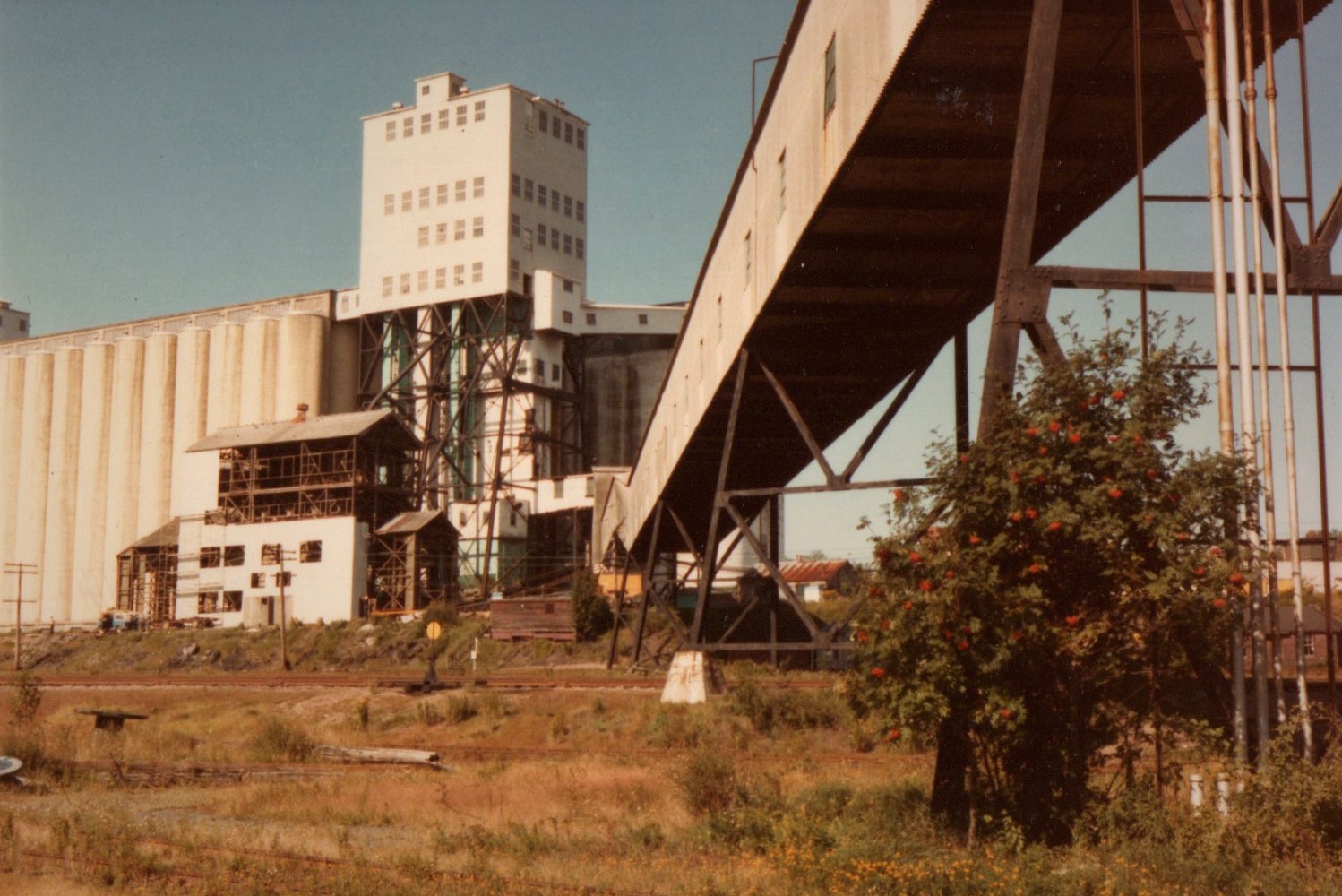 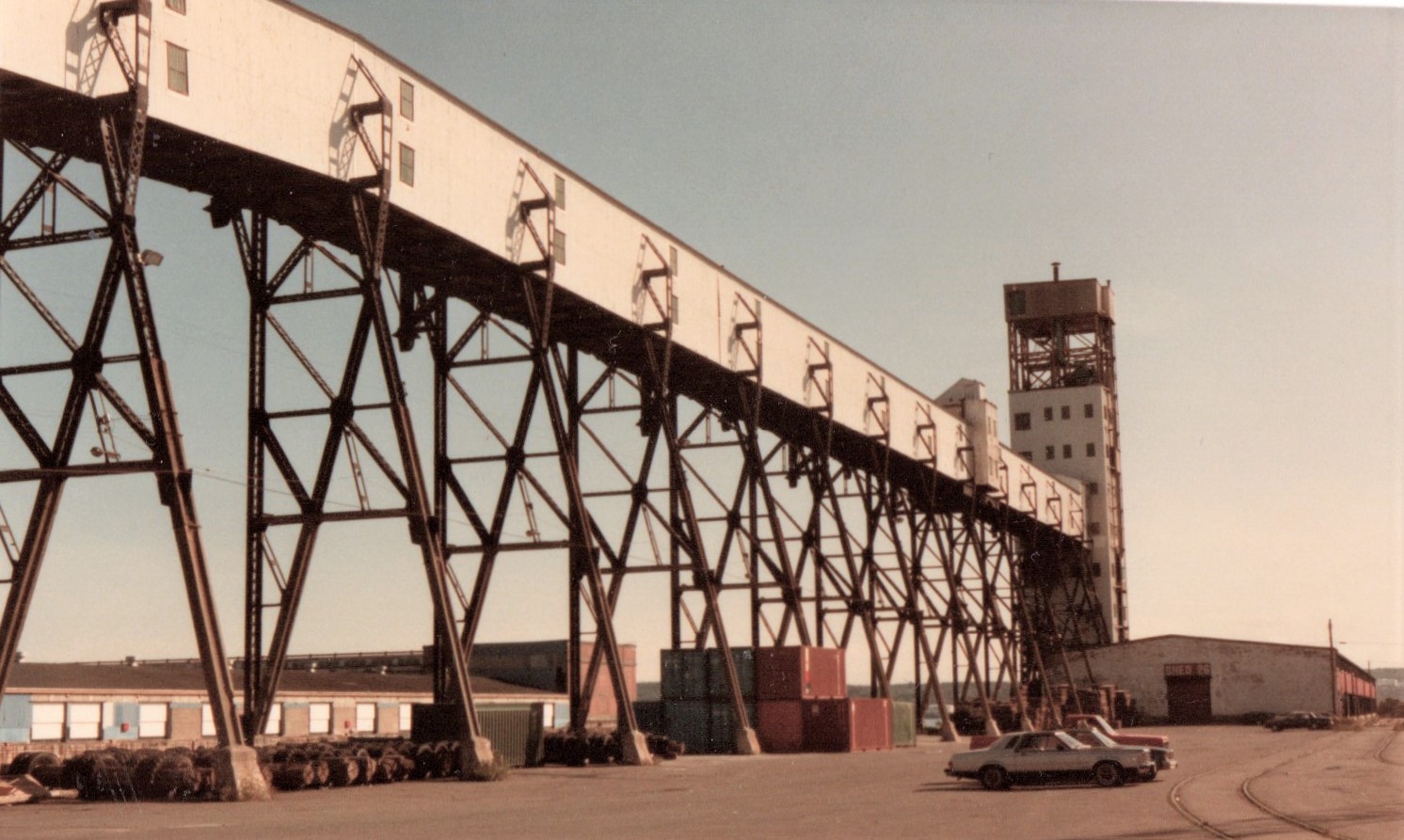 In the Ocean Terminals section everything is gigantic. That random assortment of tires, used as fenders, has the feeling of an art installation.

More tires on fenders that have come ashore, a composition written in different tread designs. 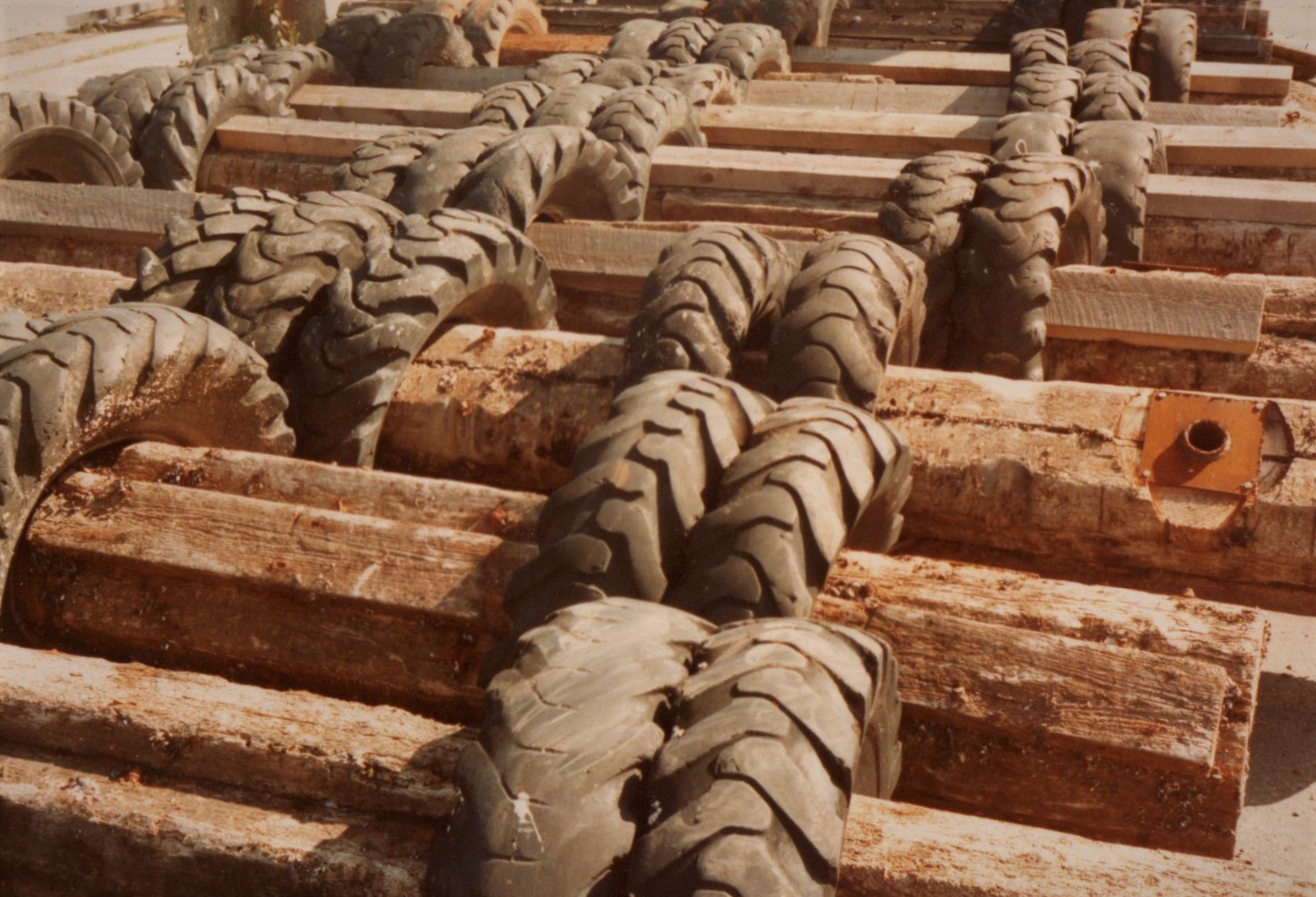 Cavallo, a ro-ro (roll on/roll off) vessel, was brand new at the time. It took cargo to Newfoundland. Her story is here. 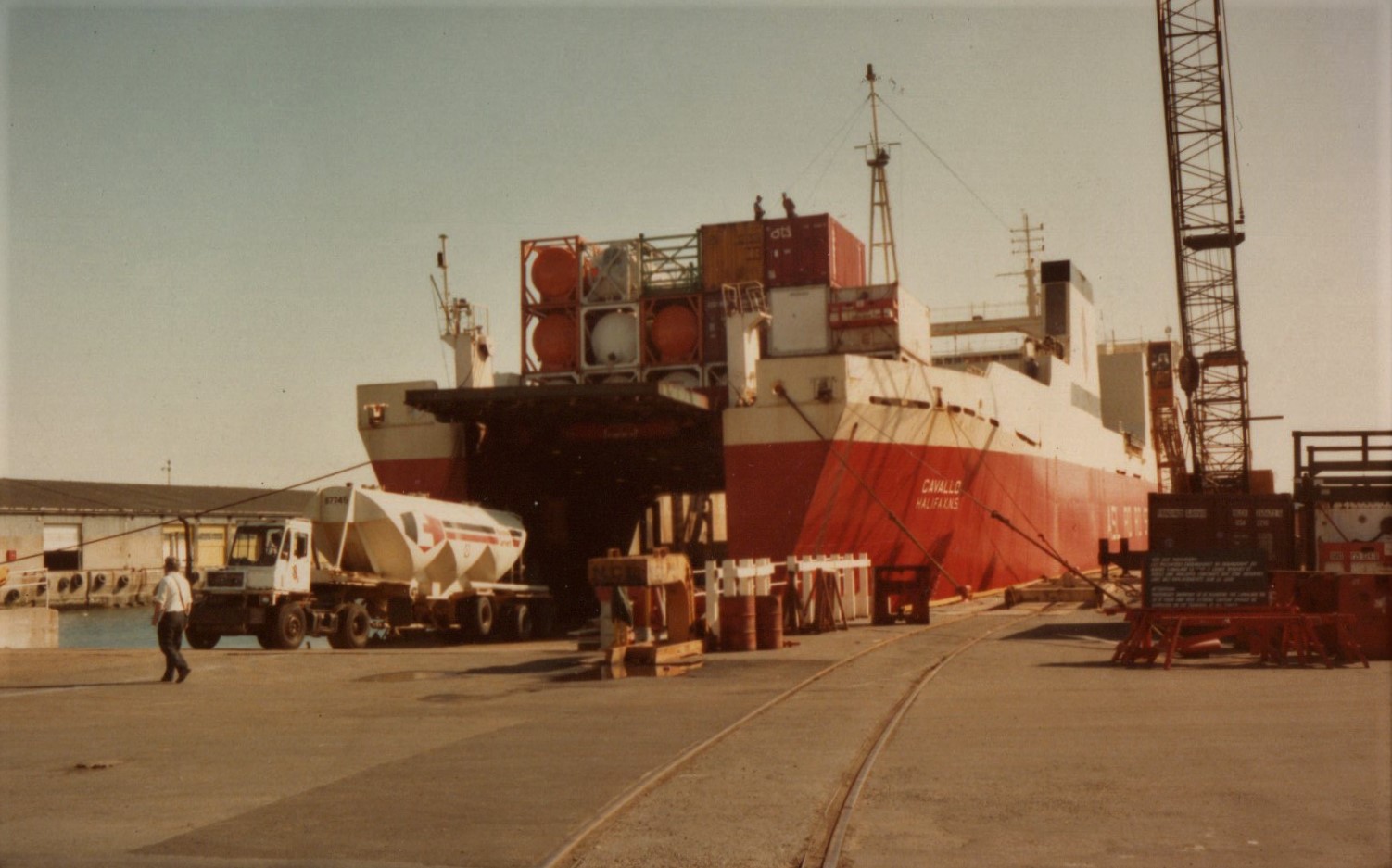 Trailers waiting to be rolled on. 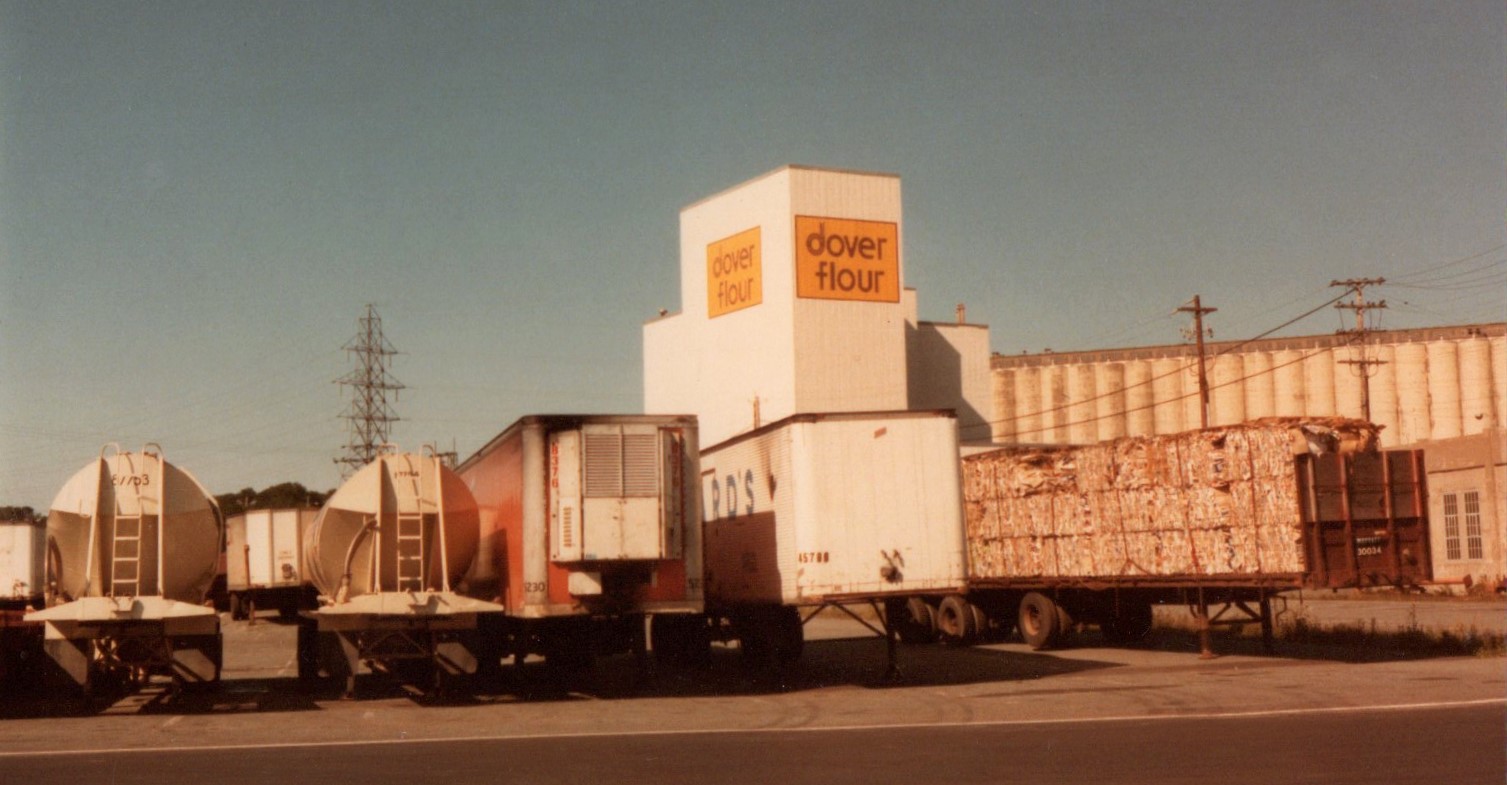 This vessel was perhaps one of the factory ships that supported the Russian fishing fleet, and maybe carried a few spies? 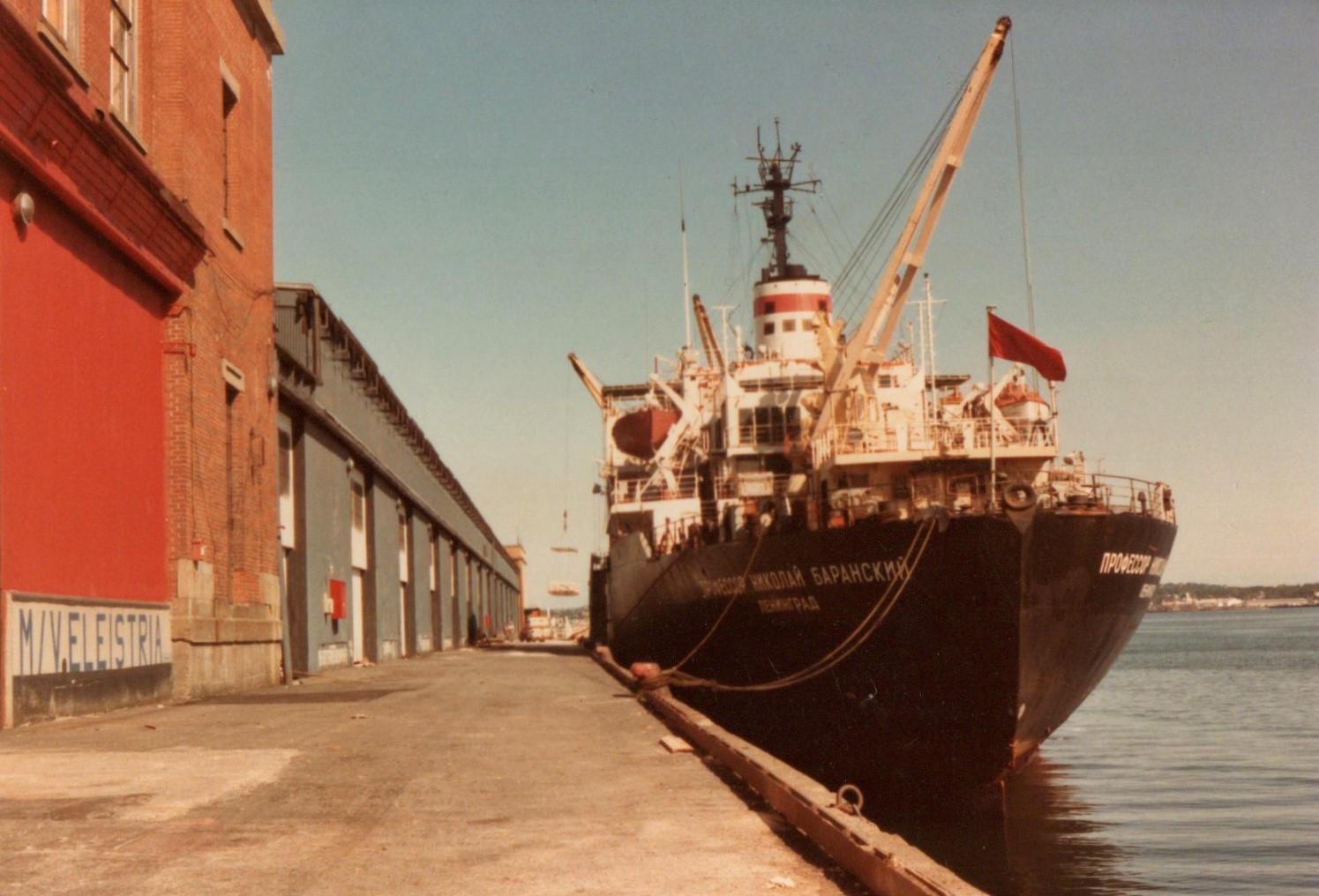 The best thing I saw that day was this massive concrete structure, a cold storage warehouse, now long gone. I imagine it held a lot of fish. It looks like proto-Brutalist architecture, 30 or 40 years before its time. And we all love a good water tank (that’s another photo of it in the header). NBH on the tank stands for National Harbours Board. 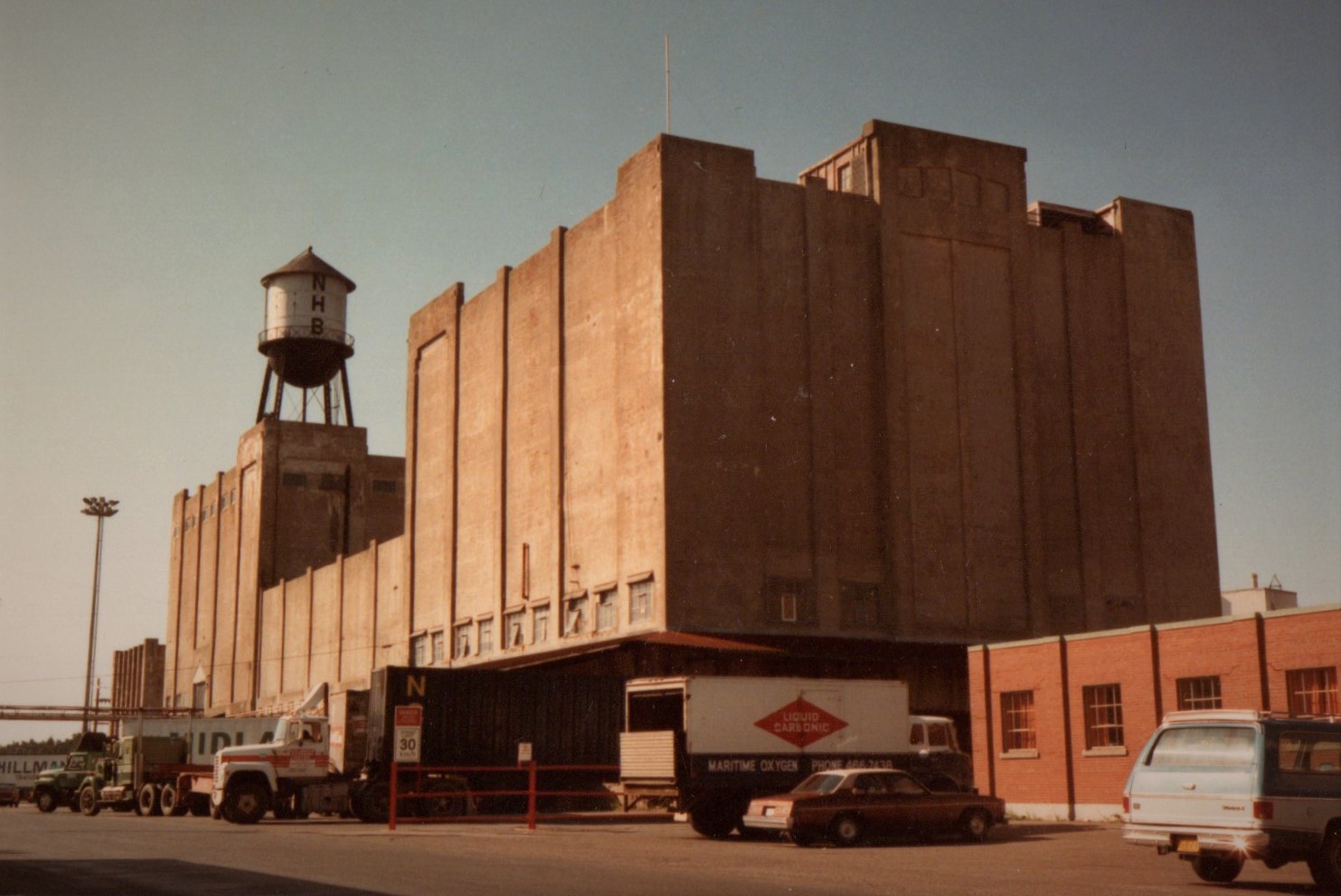 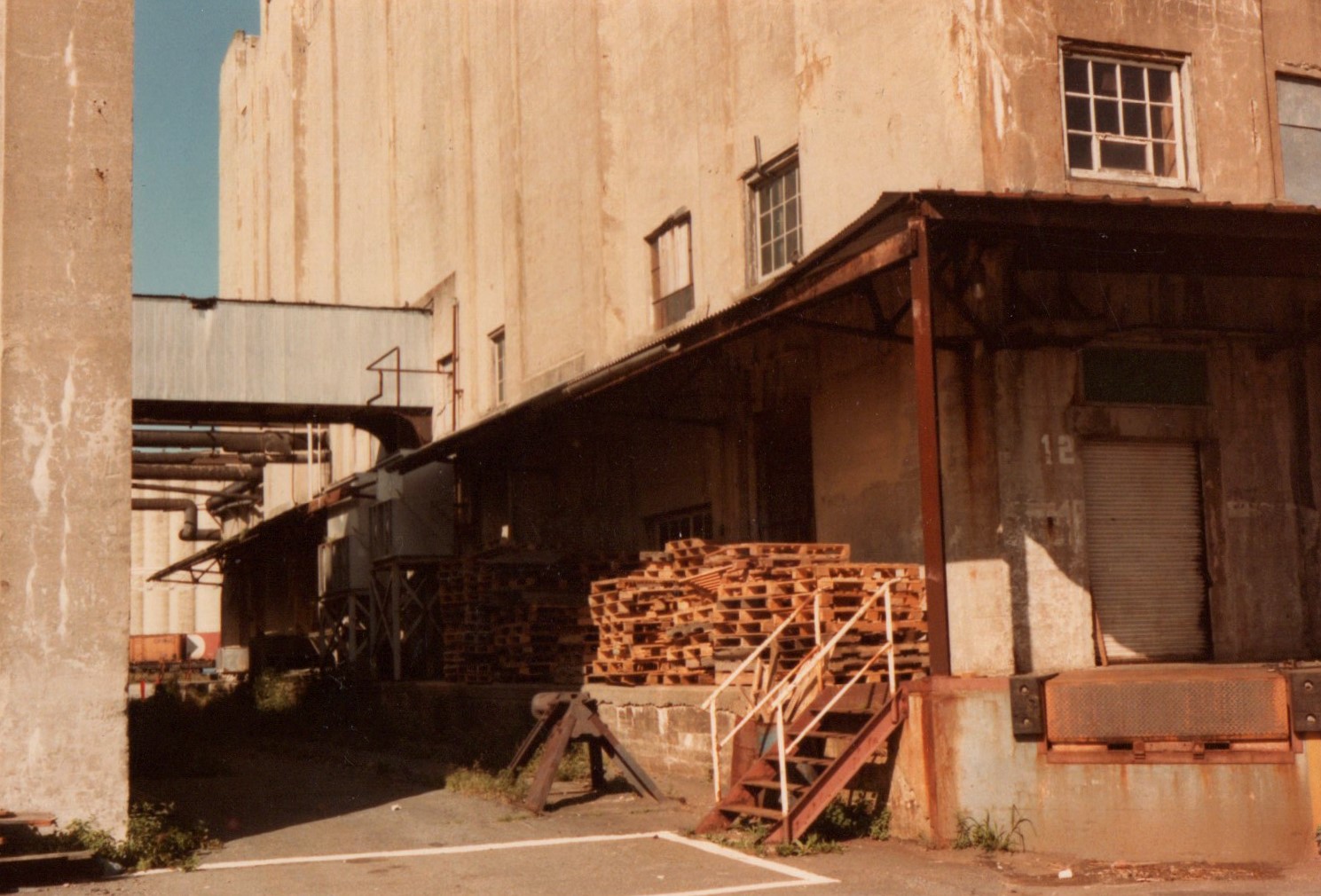 A helpful inscription said the cornerstone for the warehouse was laid by the president of the Canadian National Railways, Sir Henry Thornton, in 1928. 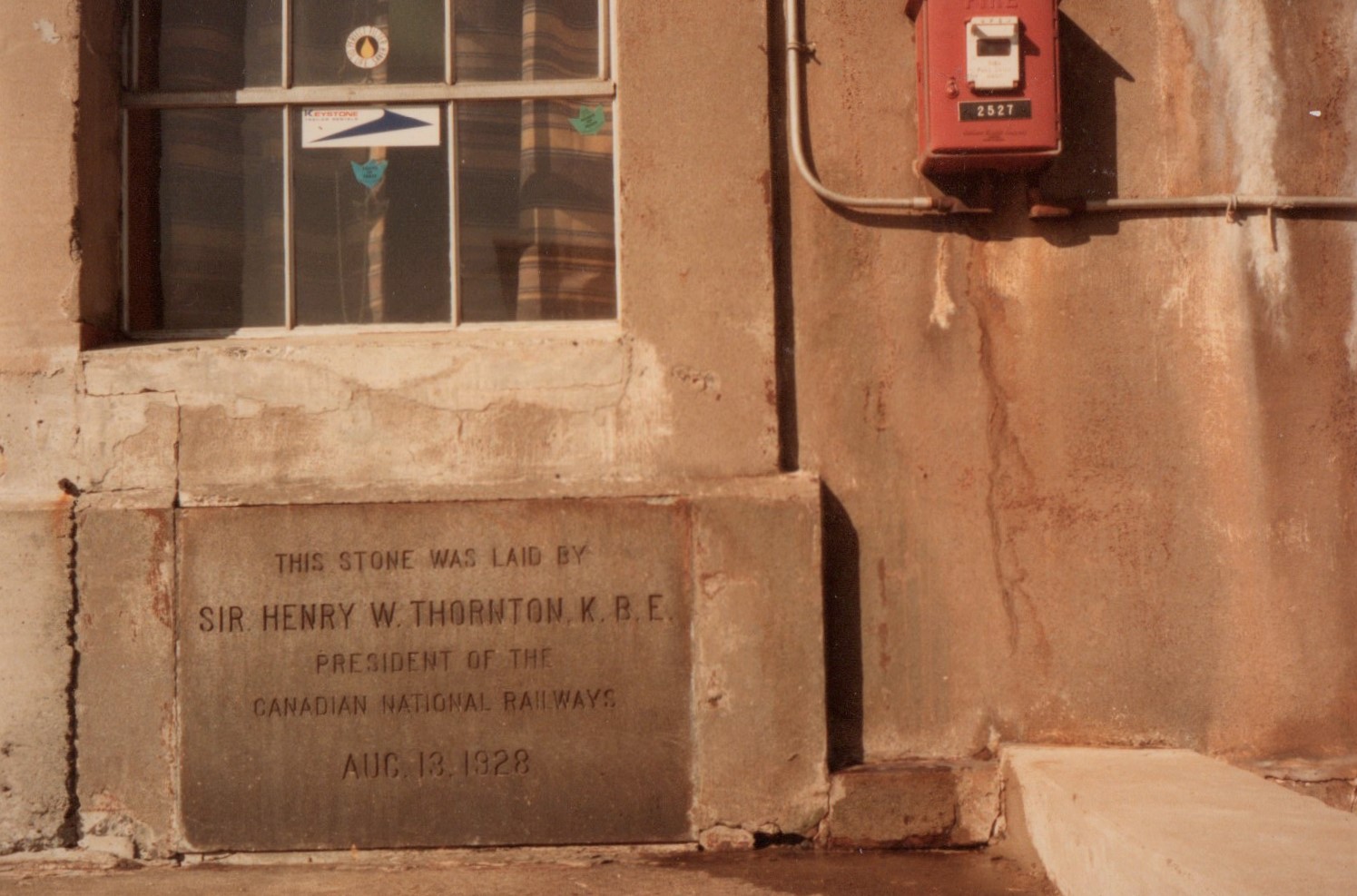 A search for Thornton + cold storage turned up this amazing 1926 cartoon. Entitled Help has arrived, it shows Nova Scotia drowning in a pool of stagnation only to be saved by cold storage facilities. Who knew that was what we needed. 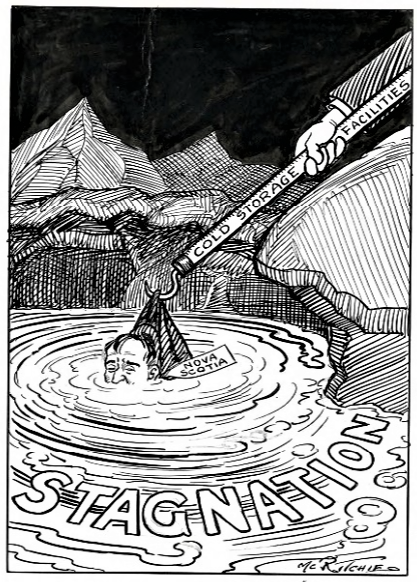 The cartoon is in the Acadia University Archives, part of a large collection of drawings by Donald M. McRitchie, made for the Halifax Herald. Here is another cartoon on the theme of salvation, from 1923. Sir Henry Thornton, our cornerstone layer, throws a rope to the Maritimes, who have this time fallen through the ice. 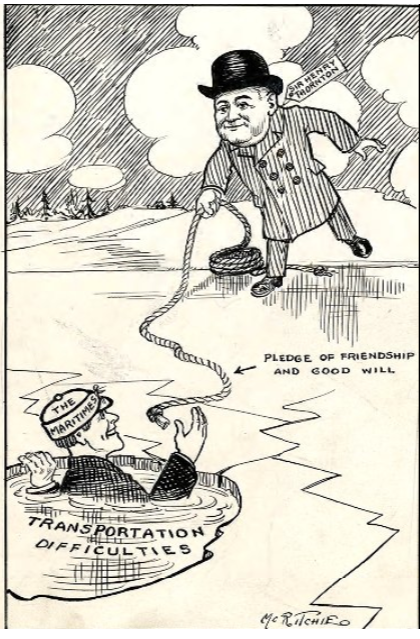 The most surprising photo in my little collection showed overgrown rail lines, and I did not immediately recognize the location. 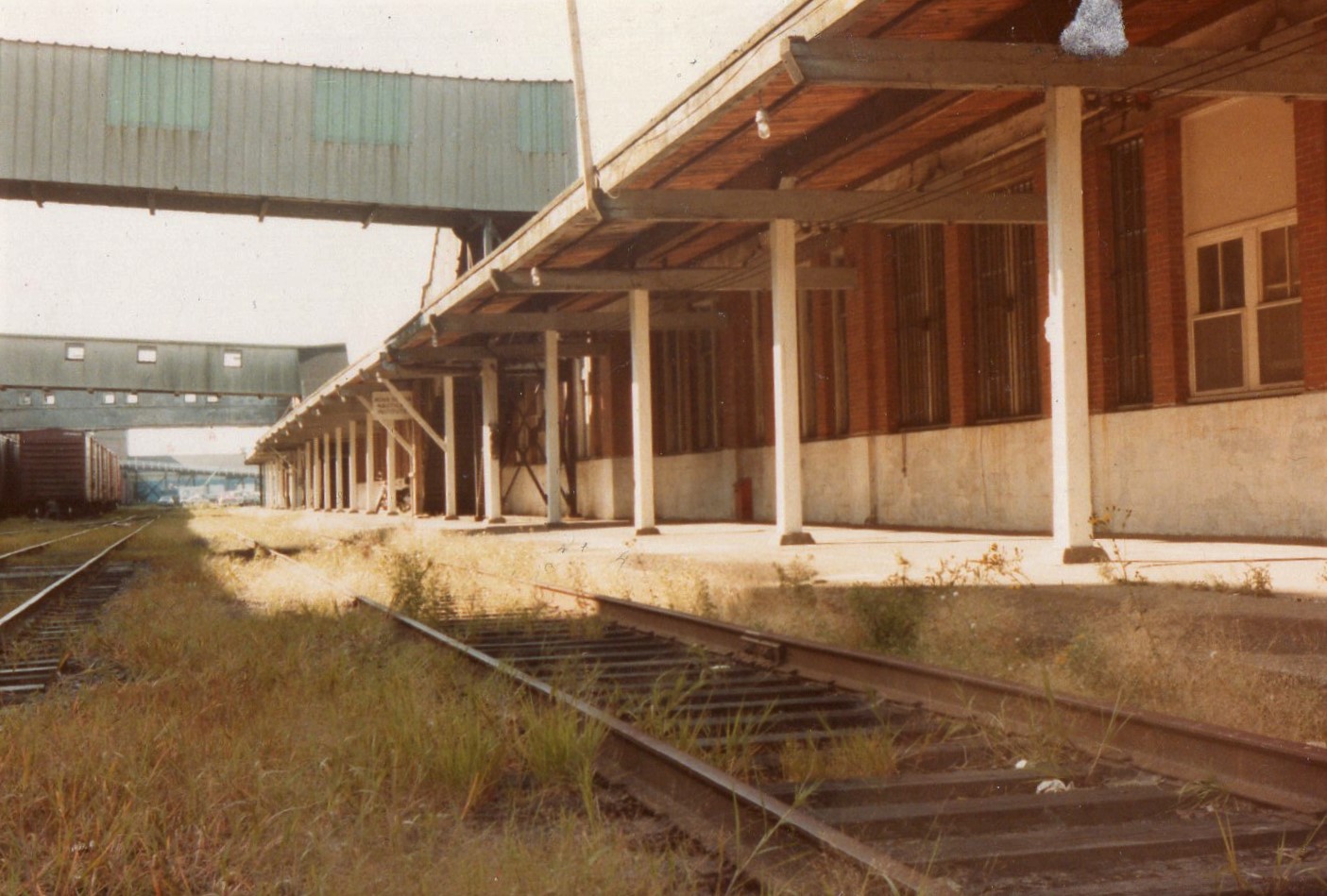 Then it struck me: this is now the road I use on Saturday mornings going to the Seaport Market, walking past the Art College and the Canadian Museum of Immigration. Didn’t see that coming 40 years ago. 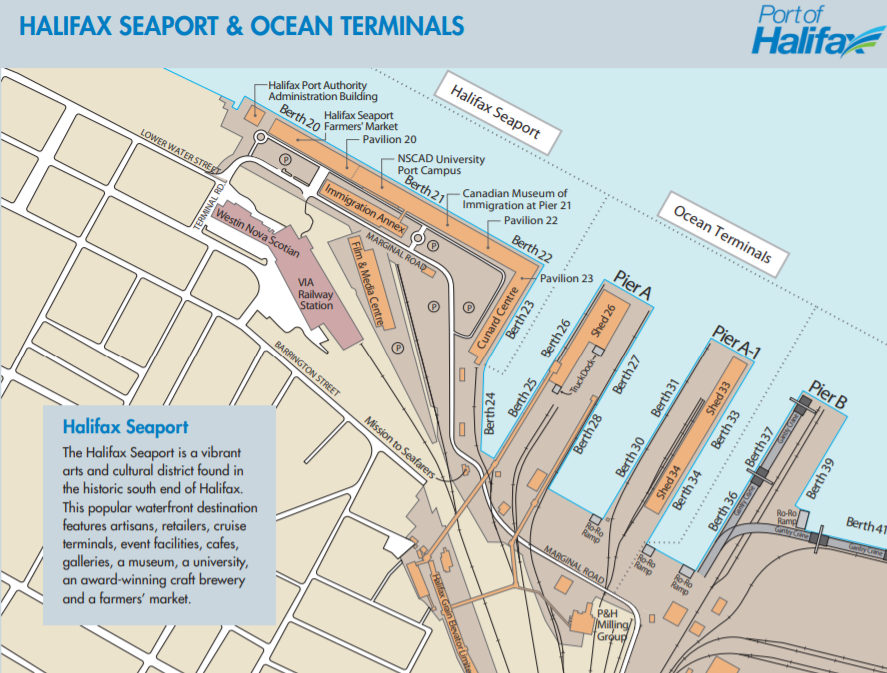 Here he is looking exactly like my idea of an industrialist, at the Ontario Jockey Club with Lady Thornton. 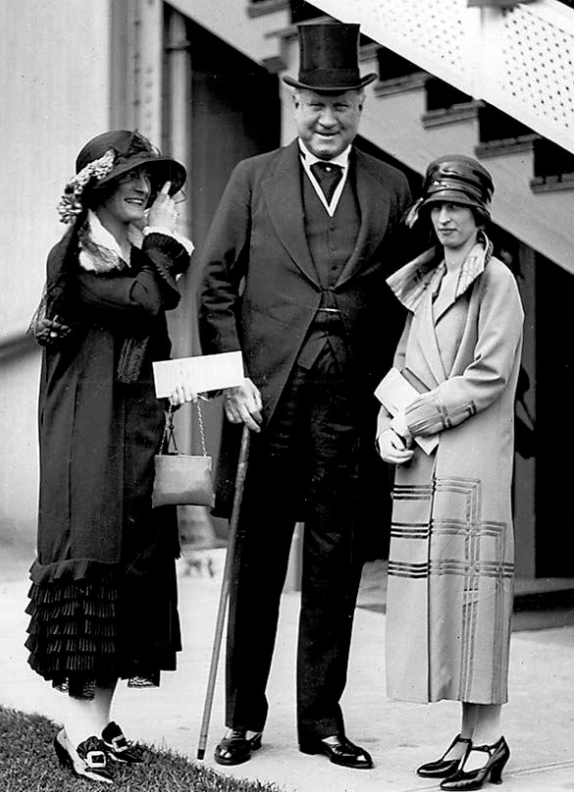 Does he remind you of rich Uncle Pennybags from the Monopoly game? Me too! 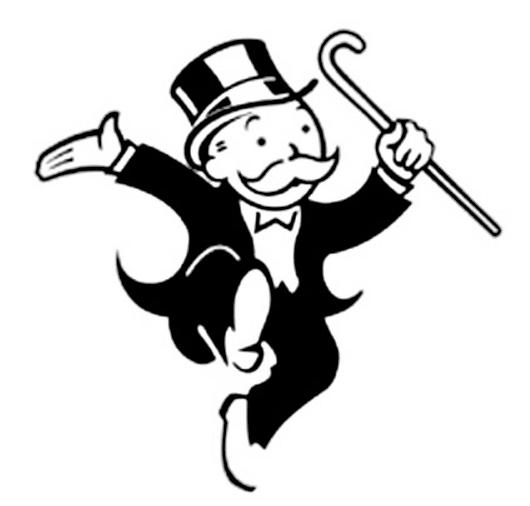