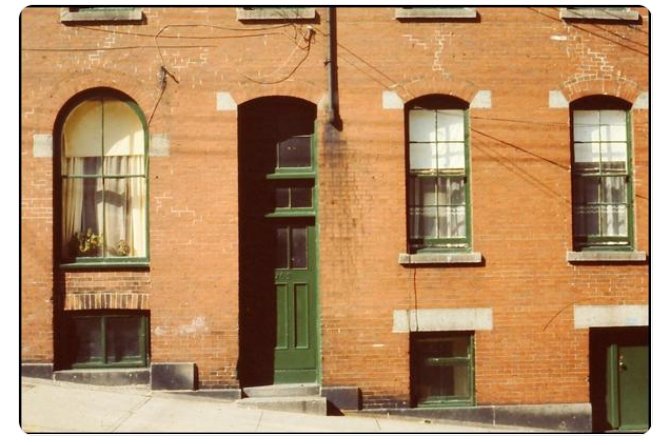 Recently the design for the redevelopment of the old World Trade and Convention Centre was presented to the city’s Design Review Committee. My attention was attracted by the proposed changes to the facade facing Duke Street, because interesting designs for steep east/west streets in downtown Halifax have long been a challenge to architects. Pedestrians are often trudging by blank walls, ventilator grills, and the entrances to parking garages.

The design proposed for the old WTCC would move a major entrance to Duke Street by slicing into the slope so the doors can be at the same level as Argyle Street. New window openings are also cut into a formerly blank wall, and a railing added to the sidewalk so pedestrians don’t fall into the new trench. 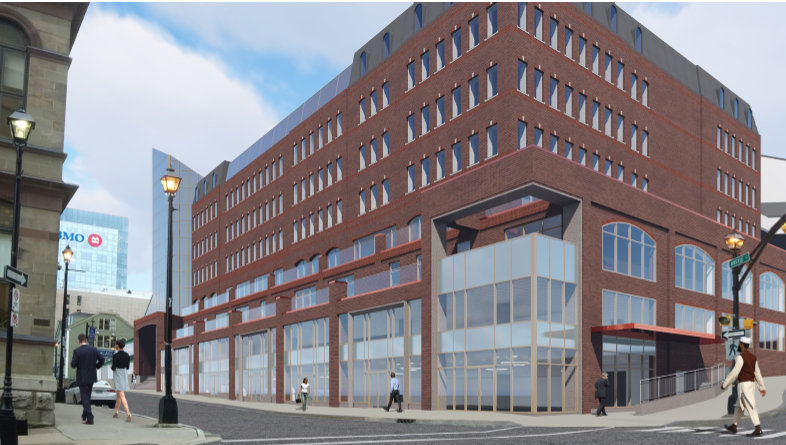 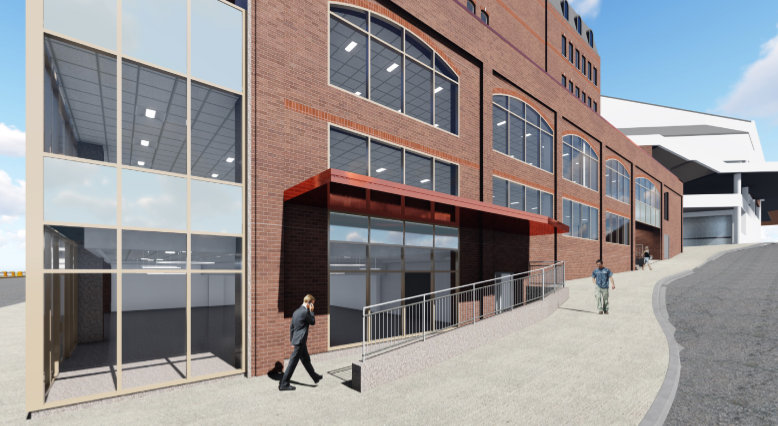 This encouraged me to return to a favourite rabbit hole for an informal look at some of the ways buildings have met our steep streets in the past.

For the first 130 years or so, the steepest streets of Halifax were lined with small buildings. These shops on Prince Street above Granville c1870 were typical, each building with a different ground floor level because of the slope. Lots of variety and curb appeal, including used furniture and carts on the sidewalk. 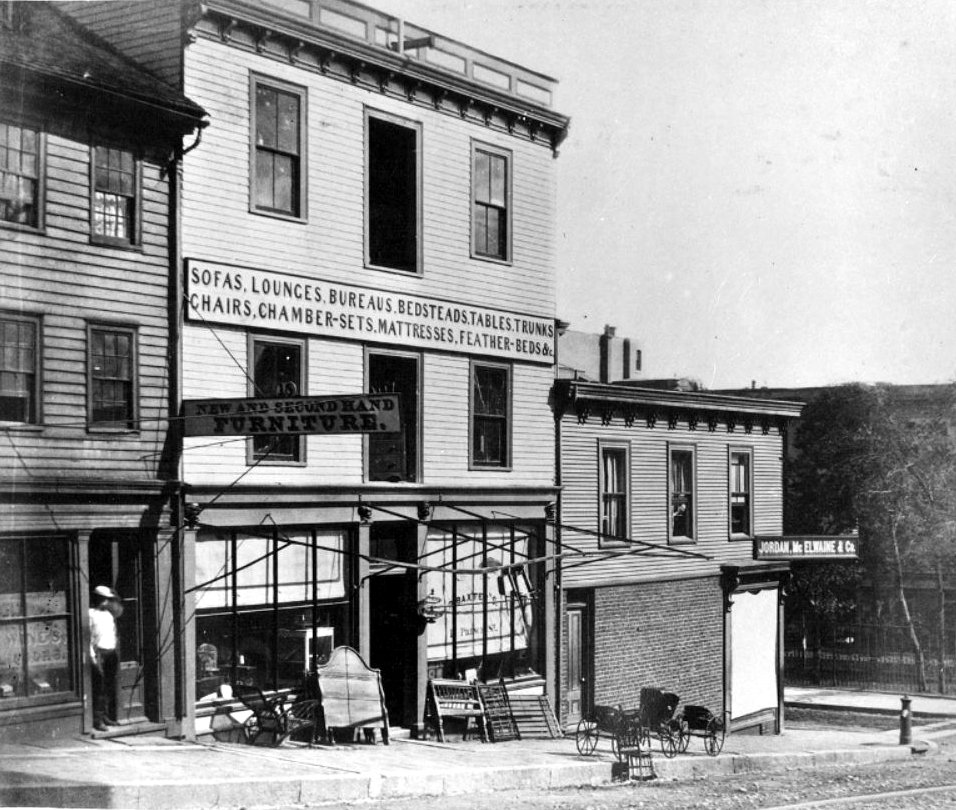 Look at that corner today to see what happens when a building with a large floor plate occupies that same space. The sidewalk level facade along Prince is complex, but in not a very interesting way. 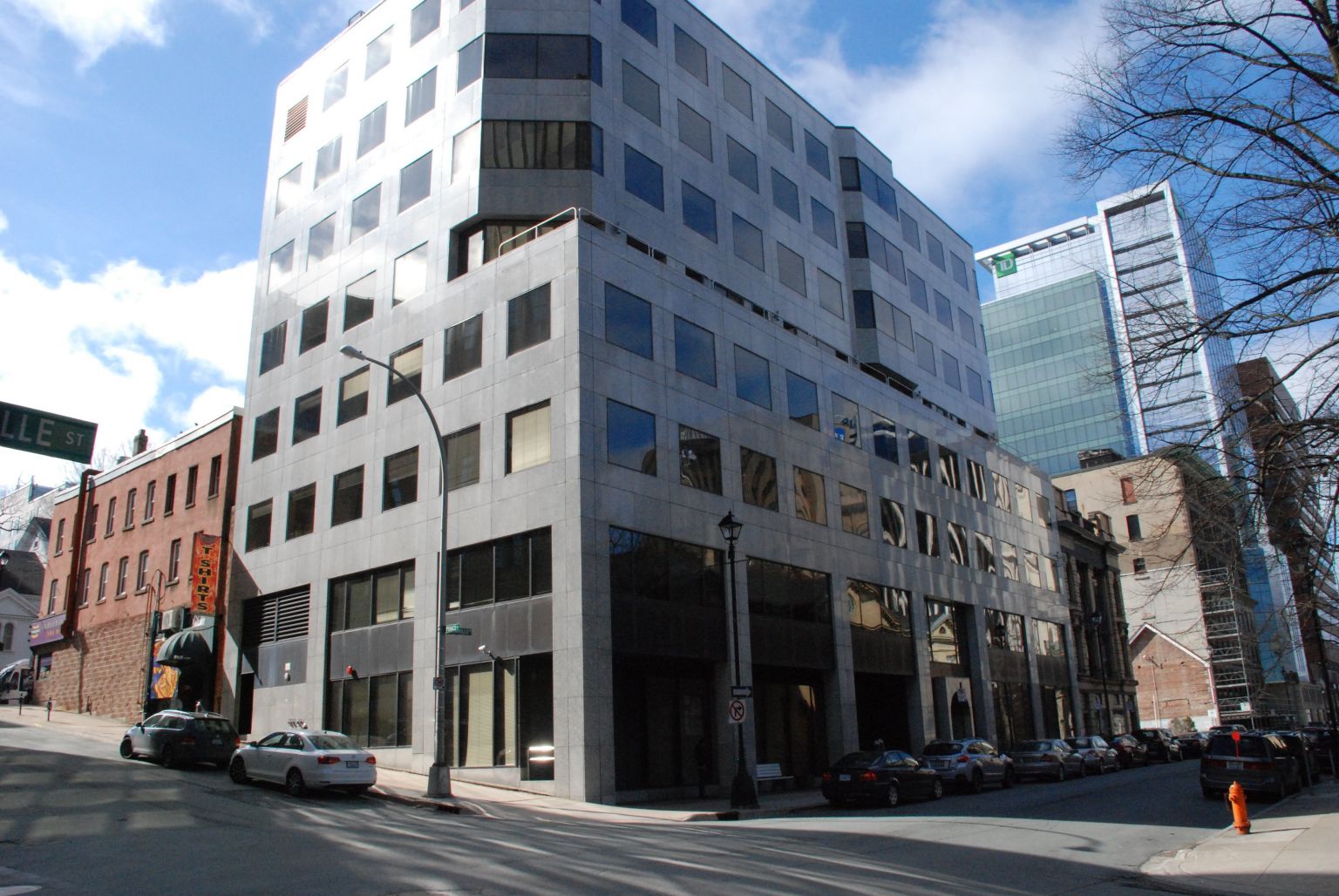 Only one intact 19th-century, east-west streetscape survives in downtown Halifax, on Prince Street between Hollis and Bedford Row. All these buildings were built around 1860, after a big fire damaged the block. This is the sort of dynamic street level we have had difficulty conjuring up ever since. 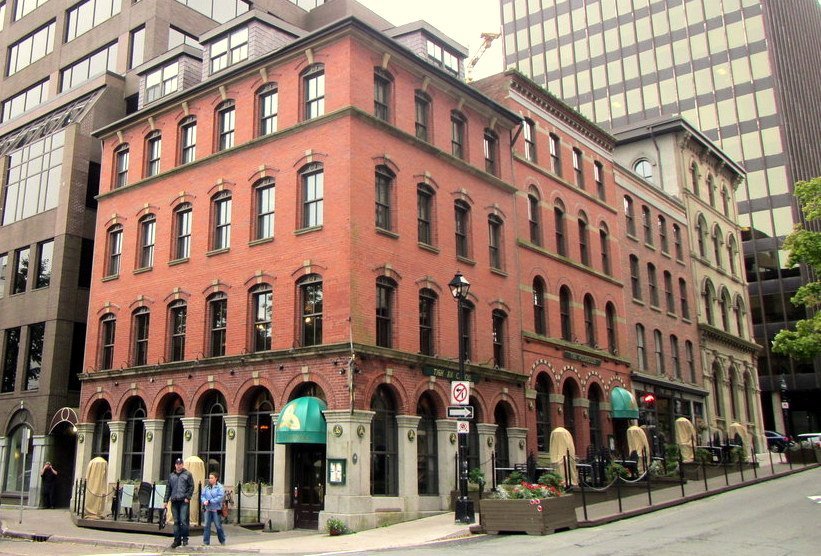 The formal entrance to the 1879 Academy Building is on Brunswick Street, but the south-facing facade is almost equally important, and has to deal with Sackville Street at its steepest. Left of the centre bay, the street level is grey granite and basement windows, and to the right there is enough room for the red brick wall to extend down for what is now Sailor Bup’s Barbershop. 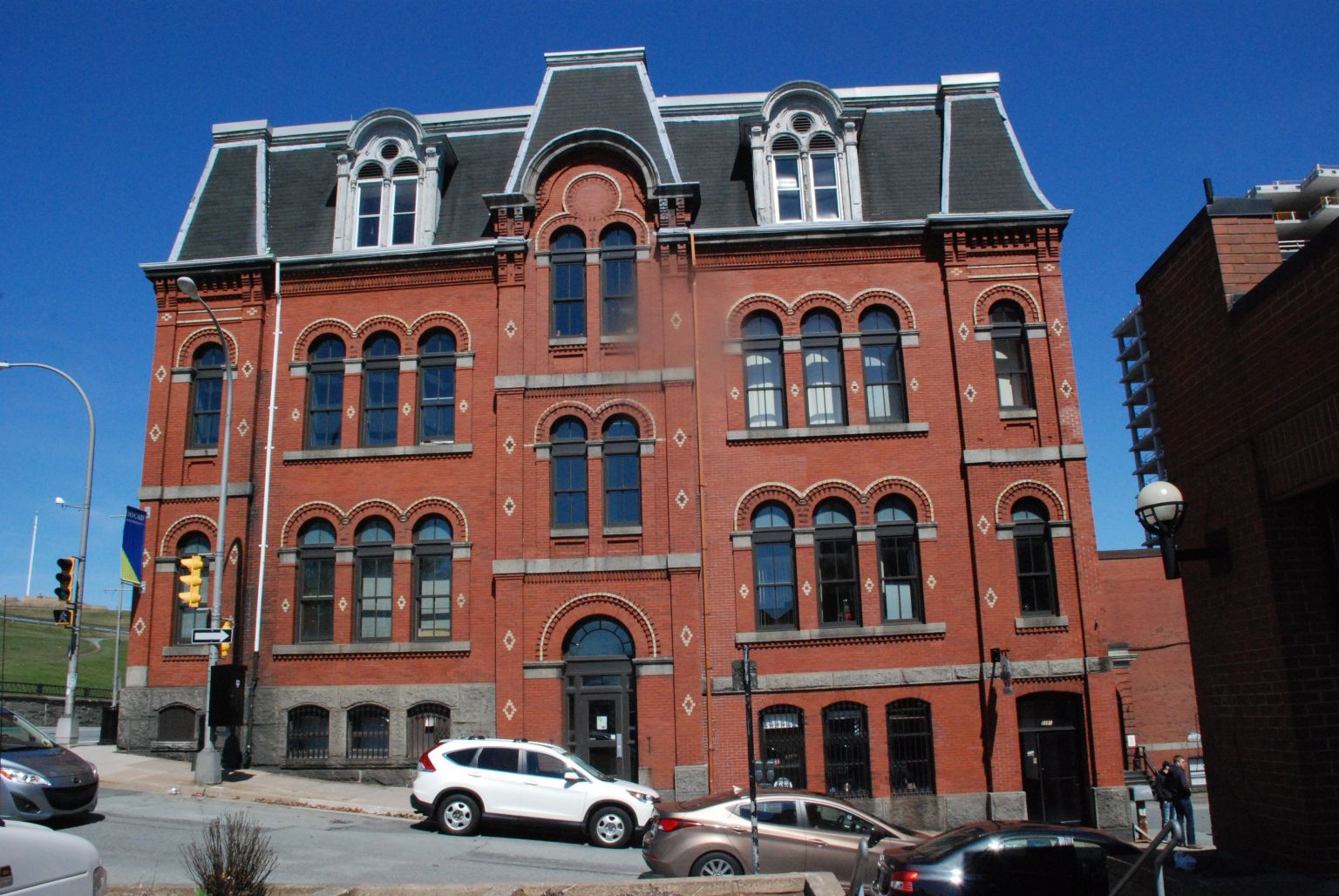 Further down Sackville, at Barrington, are more good examples of how to respond to the hillside. In the past, businesses on the corner of a sloping street often had their entrance at the corner. In this example, a gigantic celebration of time and cigarettes, over the door, takes your eye away from the windows that decrease in size as they creep up the slope. 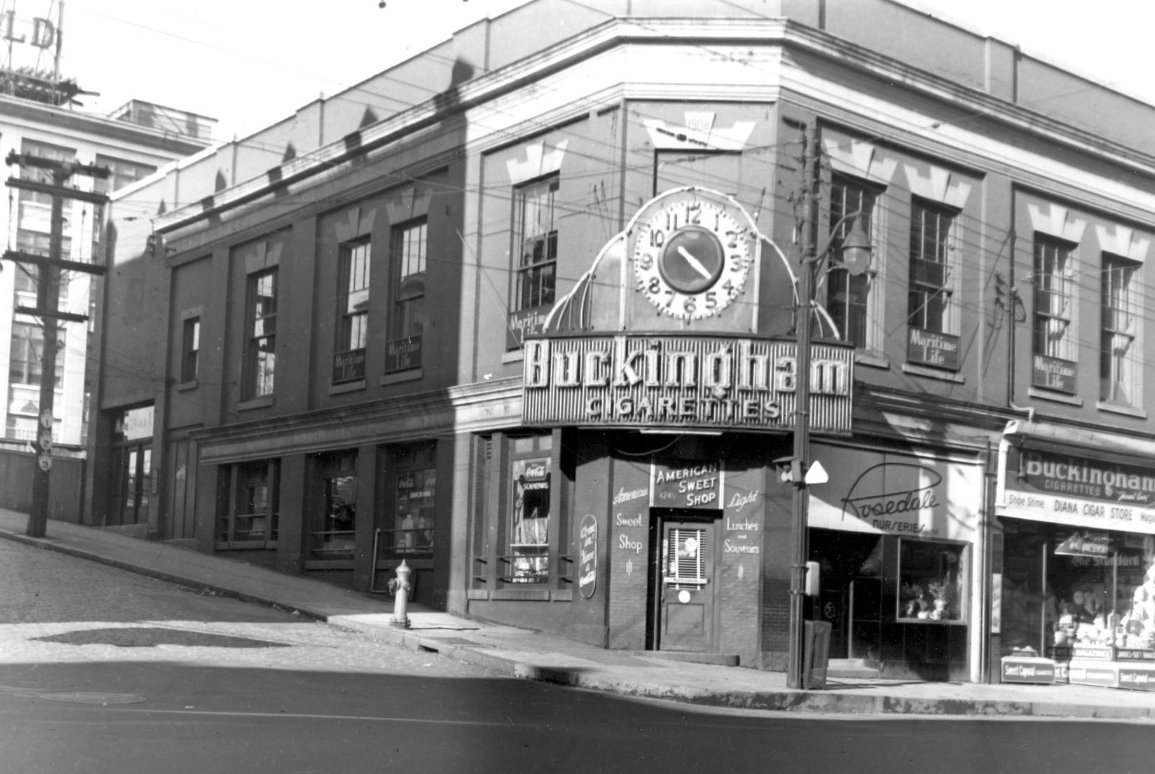 In 1962 the Canada Permanent building took over this site. The wedge of windows going up Sackville Street is one of the best modern solutions to the slope problem. The windows looked down on to the banking floor. Sadly, this little gem of a building has been much diminished over the years. The wedge of windows were originally covered by a custom designed aluminum grill, a sort of shiny reference to the iron fences that still surround so many of our important older buildings and sites. 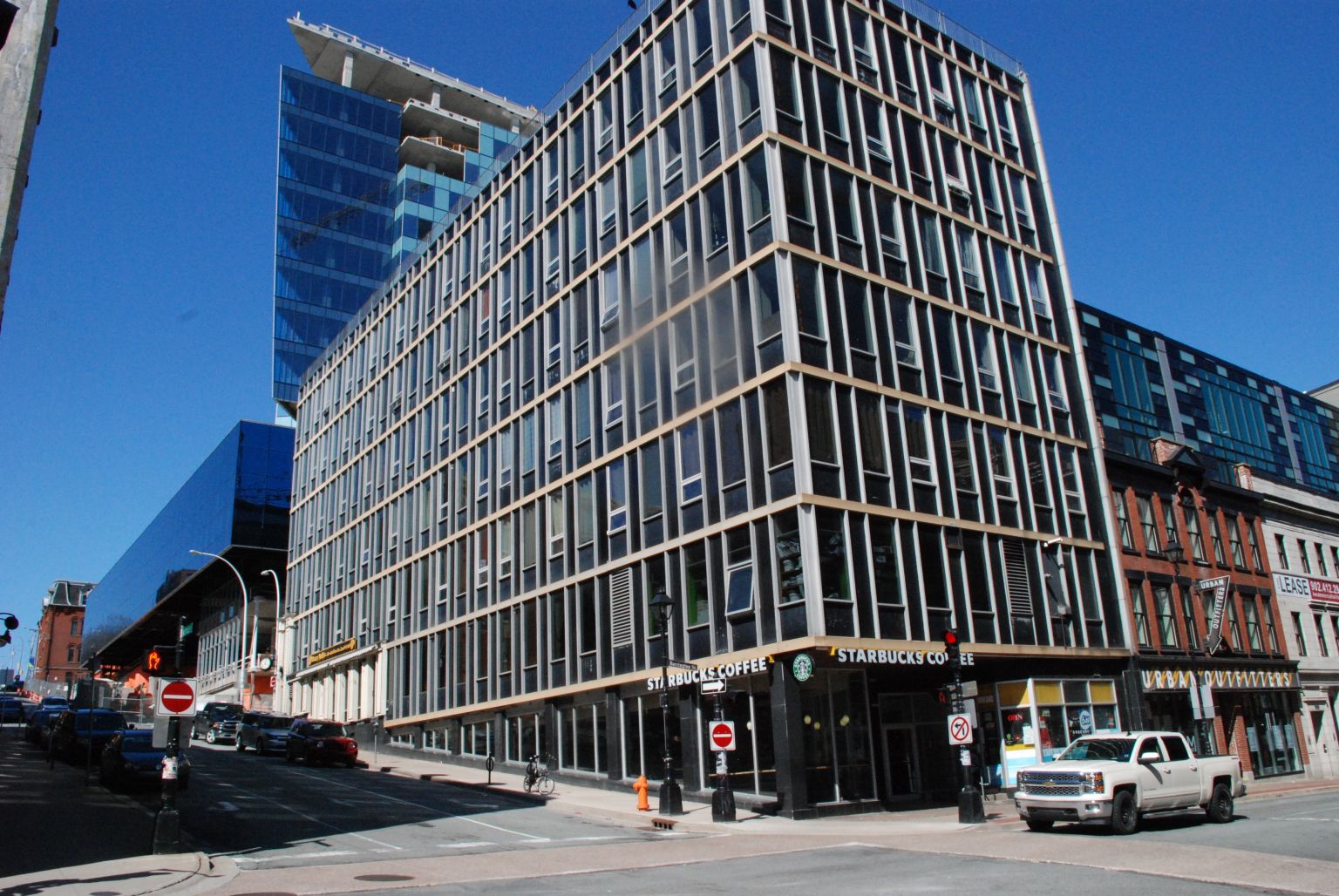 Perhaps the only big project in the downtown in the last 50 years that really tried to own its sloping street face is the much-despised Scotia Square. I’d just ask you to really look at the monumental podium, giant slabs of concrete that visually float above the angle of Duke Street. You have to admit there is nothing wimpy about this design. 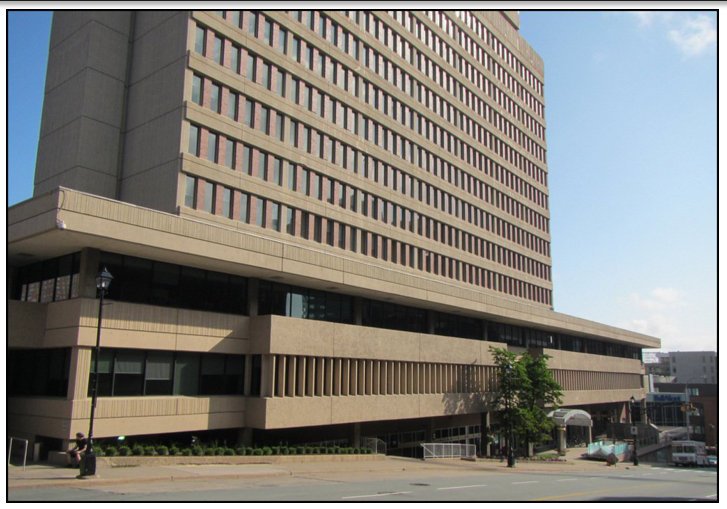 Scotia Square’s solution to the steep street was to build a generous terrace parallel to the street. You can see this in my photo from about 1970 when the complex was band new. The terrace is lined by modernist clear glass light globes. The entrance led into the mall level with the Woolco anchor store and the cinema. 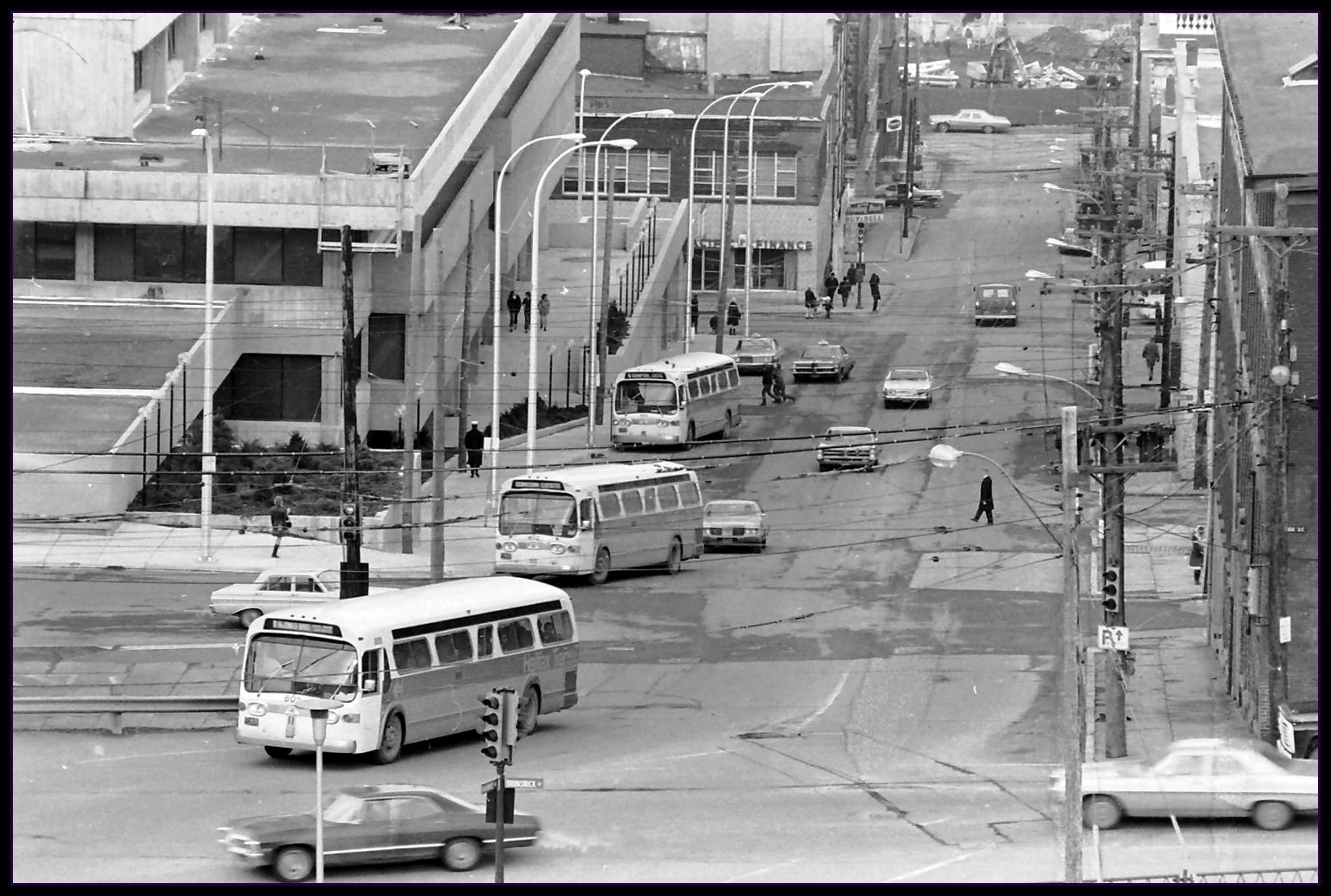 We know that the Duke Street face of Scotia Square, despite its grand gestures, never became a “place.” The tentative moves across the street at the WTCC will probably not be the saviour of Duke Street either. 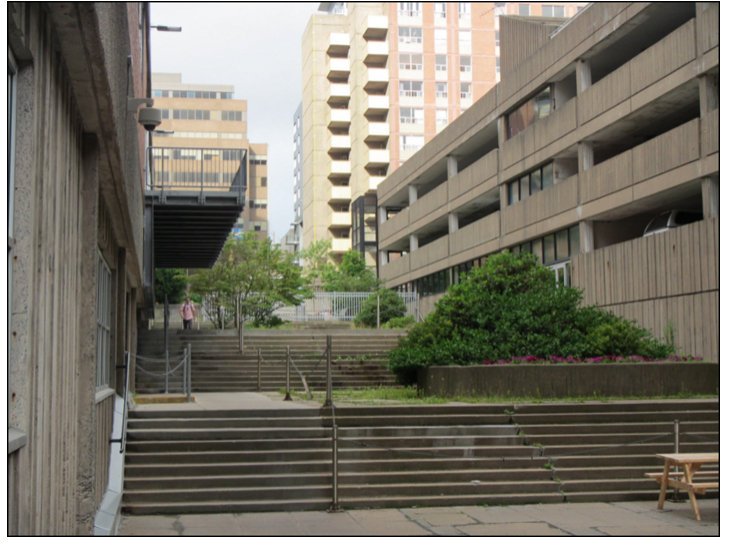 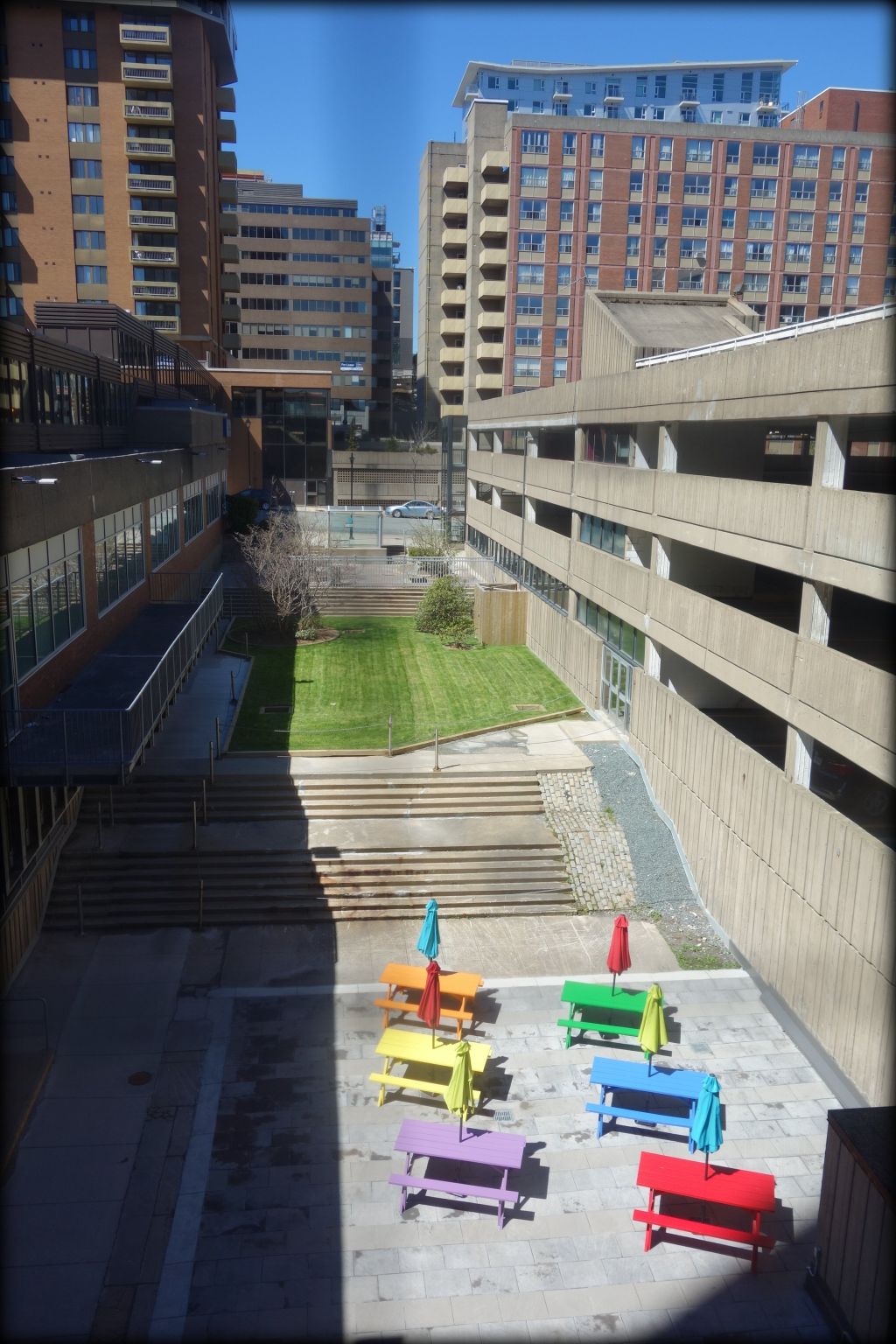 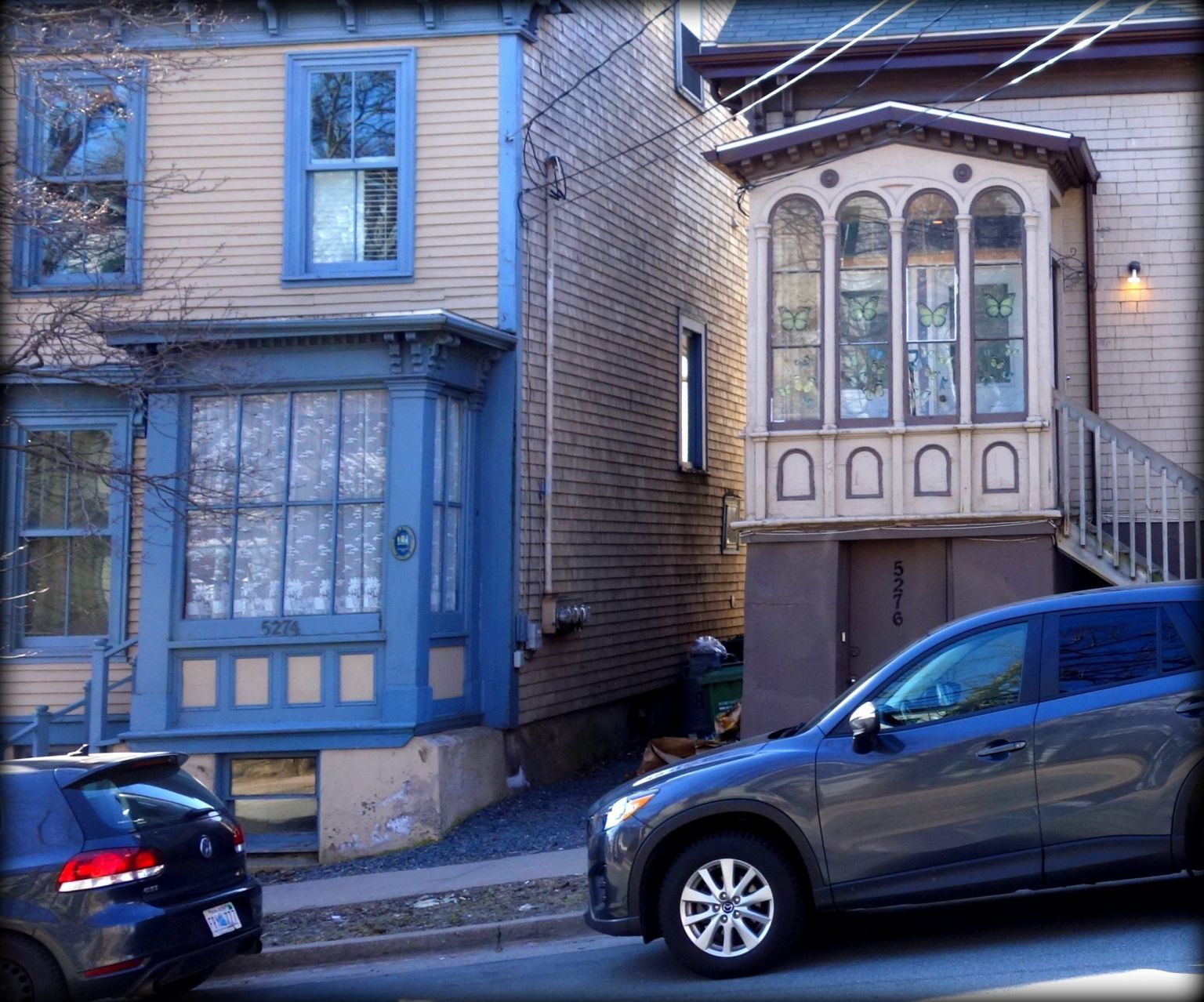 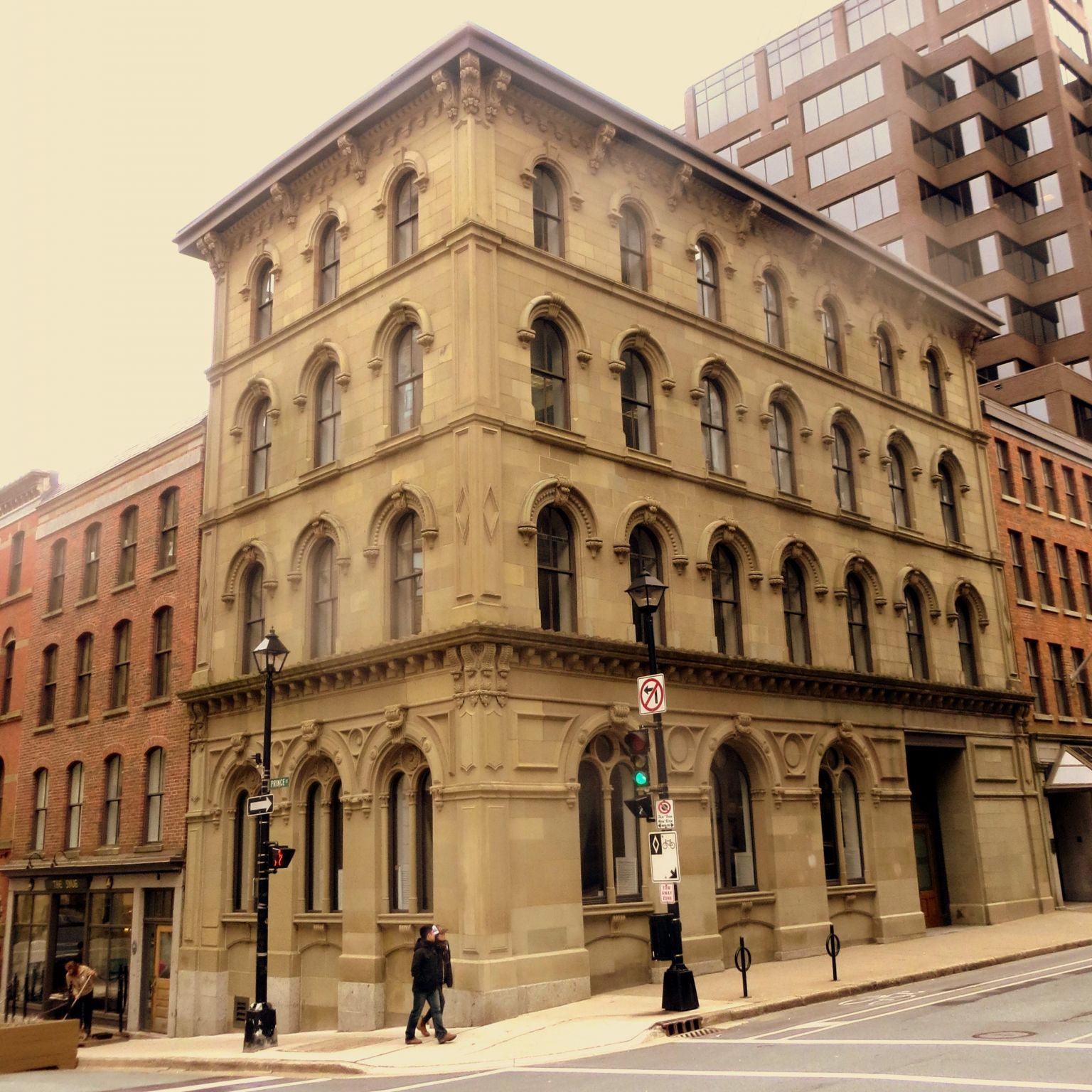 Power’s Drugstore, that was on North Street and Barrington (beside the bridge), had a corner entry and large show windows above the steep sidewalk. 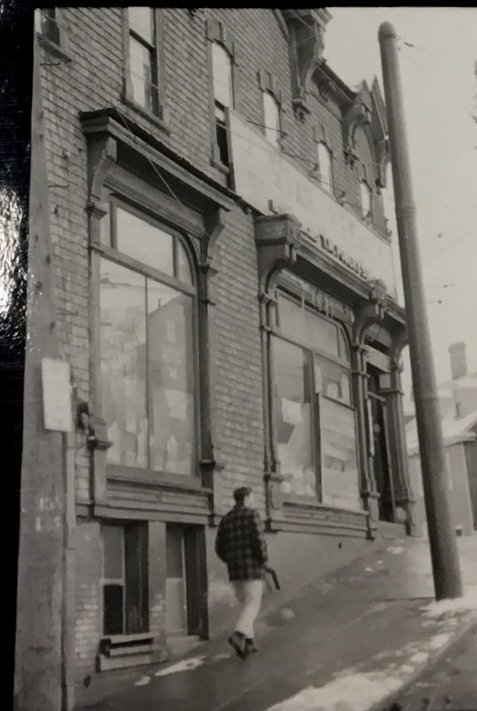