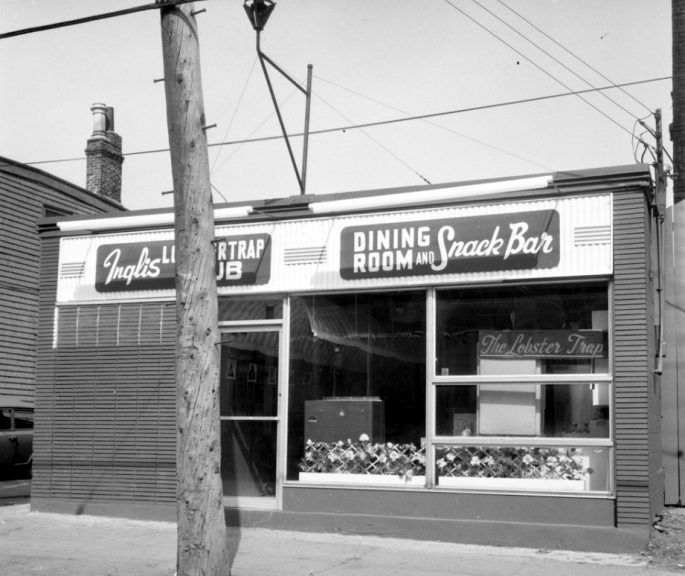 The last post took you inside this big, old house on Inglis Street, where we lived in the 1980s. I mentioned it had been one of a pair, but that the mirror image burned and the Resolutes Club occupied the site. Now I can tell that story in more visual detail. 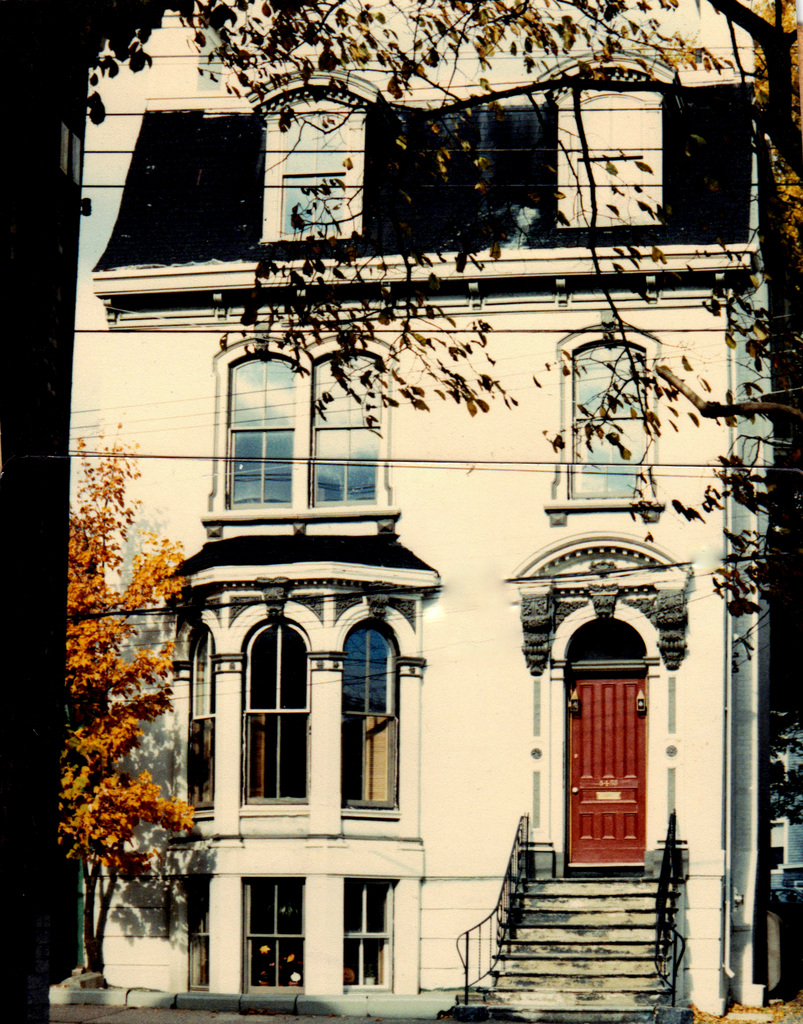 After my post, Sharon Murray from the Halifax Municipal Archives directed me to photos taken in 1960 by City building inspectors to record the fire damage to our neighbour. What a discovery! It was instructive to see that our house, on the right, looked more decrepit than its burned-out sibling. 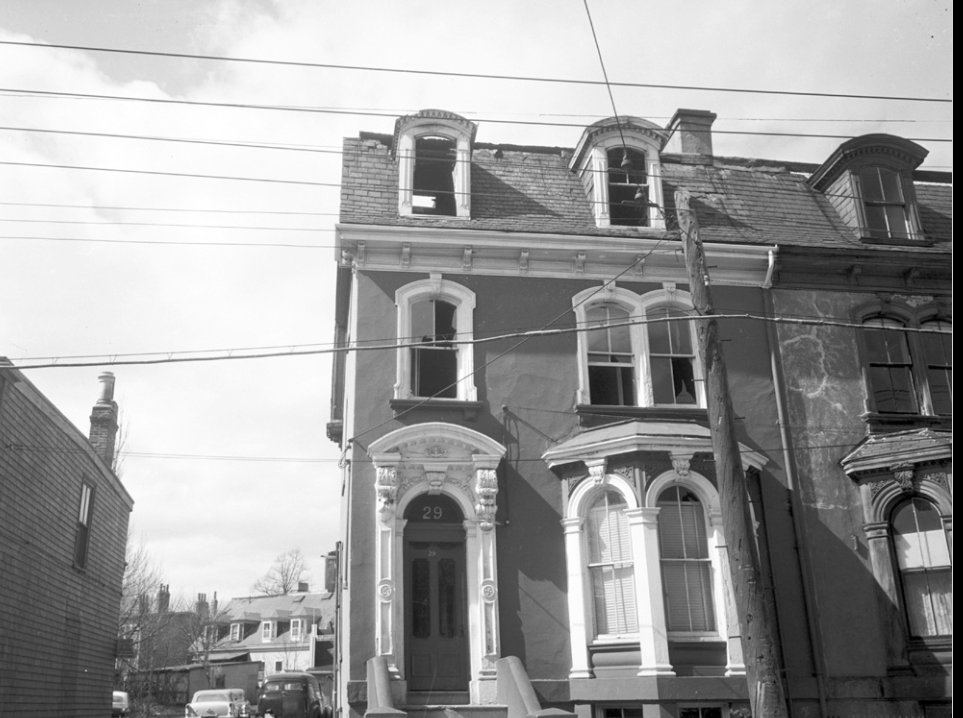 This beautiful photo shows the burned house, several months after the fire, when it is being demolished, with apparent care. The roof had already been removed. The photo also reveals that back in the day we hadn’t yet learned how to close a sidewalk as we do so readily today. 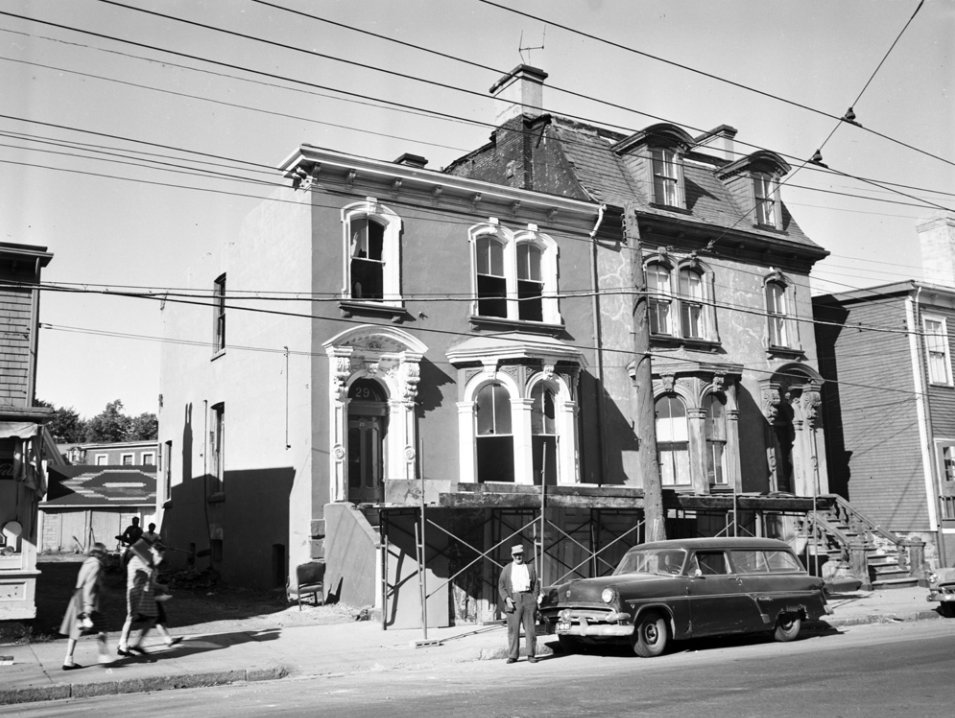 The Municipal Archives has a number of shots of the fire-ravaged interior. The  damaged stair on the left is interesting to compare to the equivalent on our side of the house. 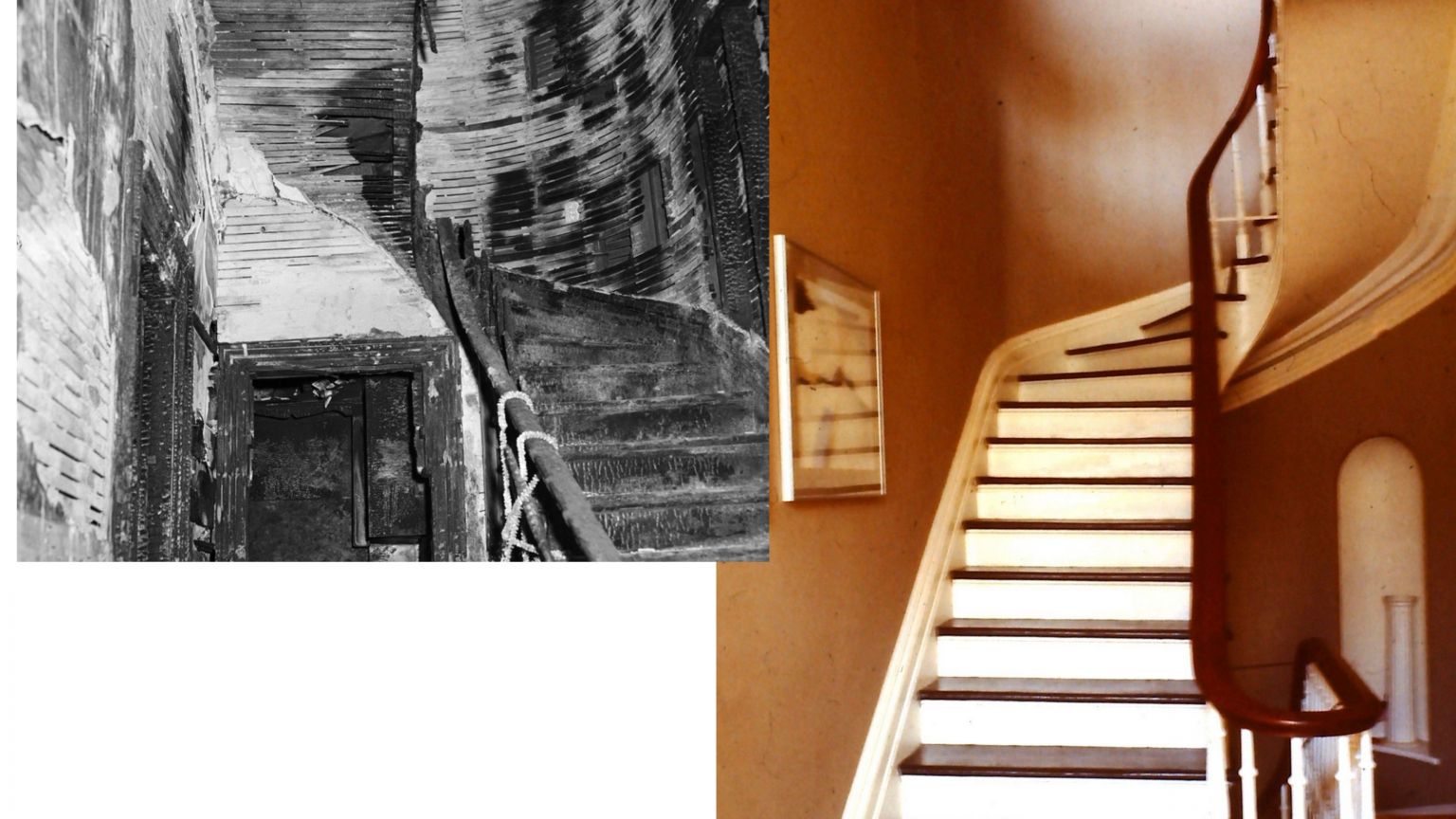 After the demolition, a long, narrow, one-story concrete block building was constructed on the site. Someone told me that it was built for a dry-cleaning business, but by the mid-60s it had morphed into a nightclub called the Flame. All I really know about the club is that it had a flaming gas jet on the front. In 1967, the building inspectors were back, and photographed the building that was now called the Inglis Lobstertrap Club, with what must be the brazier for the Flame still mounted on the roof. Sweet. 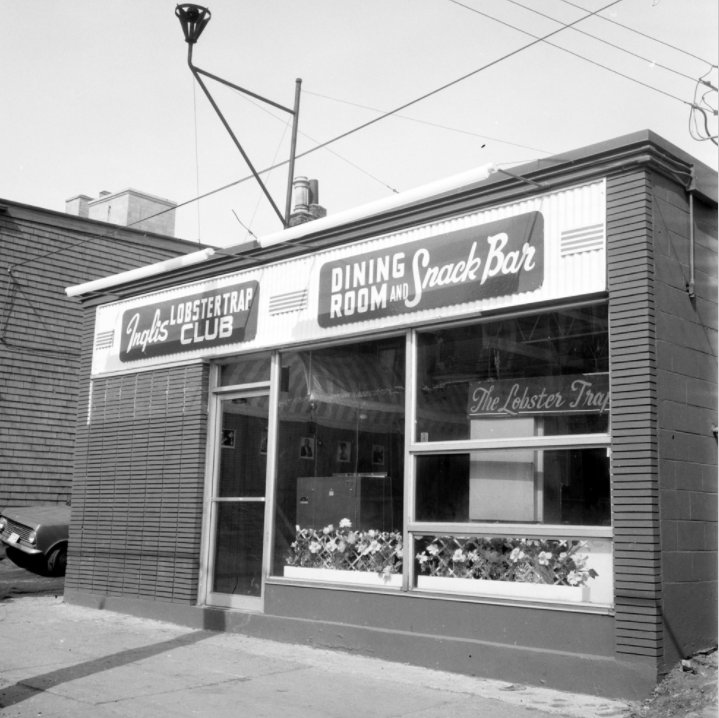 When we arrived in 1979, the building was home to the Newfoundland Club. The windows on the front had been closed in and covered with rustic shingles. Here I am in the late 80s, sweeping the sidewalk in front of our house and the club (because community spirit), which had changed hands once again, and was the new home of The Resolutes Club. 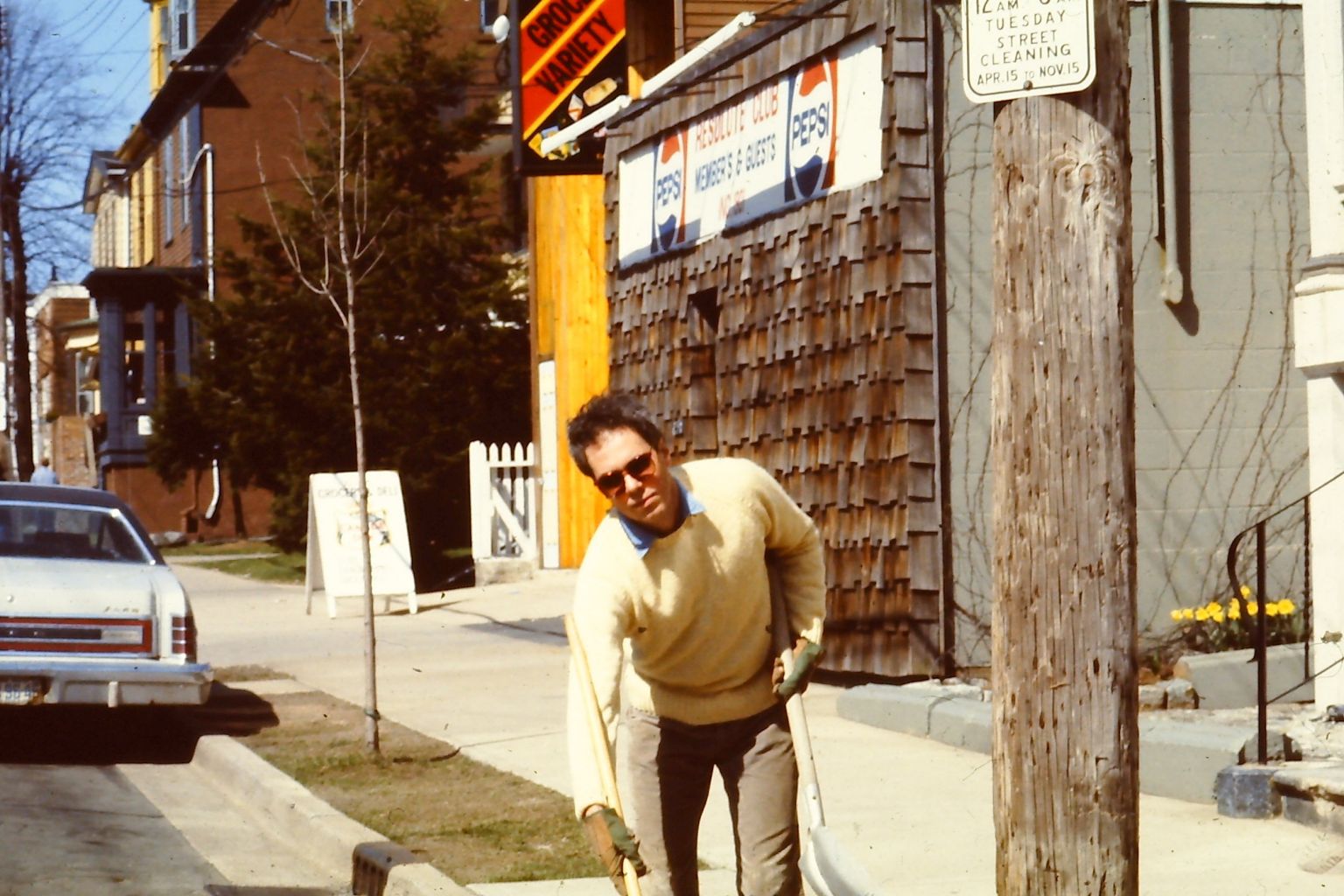 The Resolutes Amateur Athletic Club was incorporated in 1901 and is proud to be the oldest private members club in Nova Scotia. They were previously located somewhere in the North End, and soon made some quite attractive alterations to the facade of their new home. Street View shows flower-filled planters that are a far cry from the regular Saturday night fights we witnessed in the Newfoundland Club days. 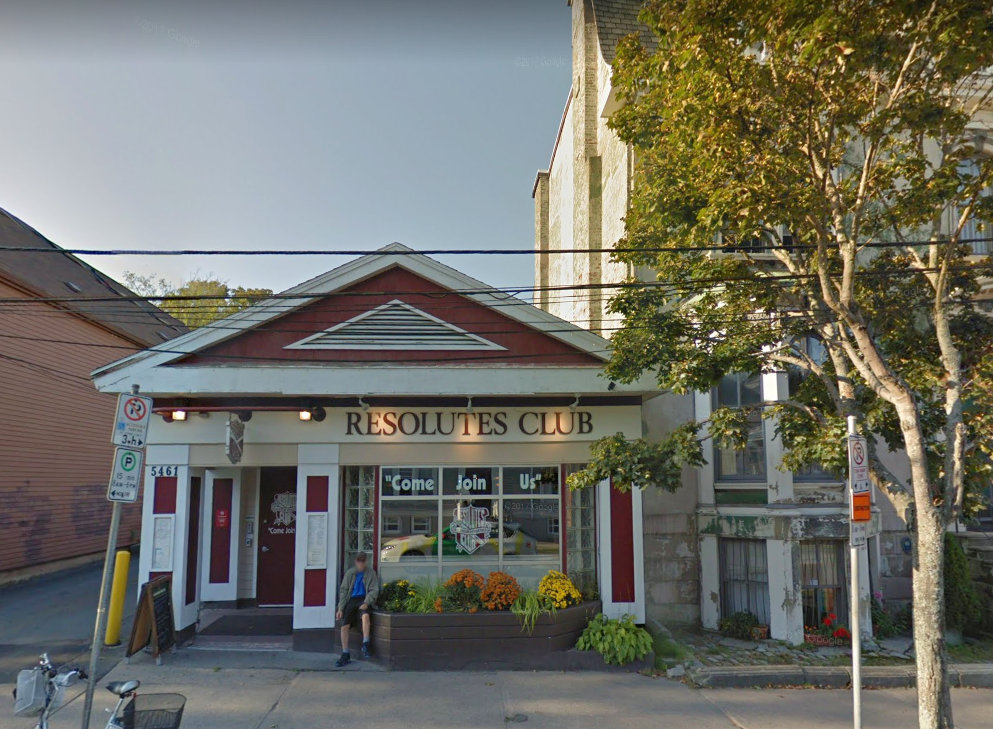 While you’re here, let’s also look at the evolution of the convenience store next door to The Resolutes. I took this swell picture of People’s Groceries some time in the 70s. The windows display socks, mops and brooms, and “Men Only” magazines. 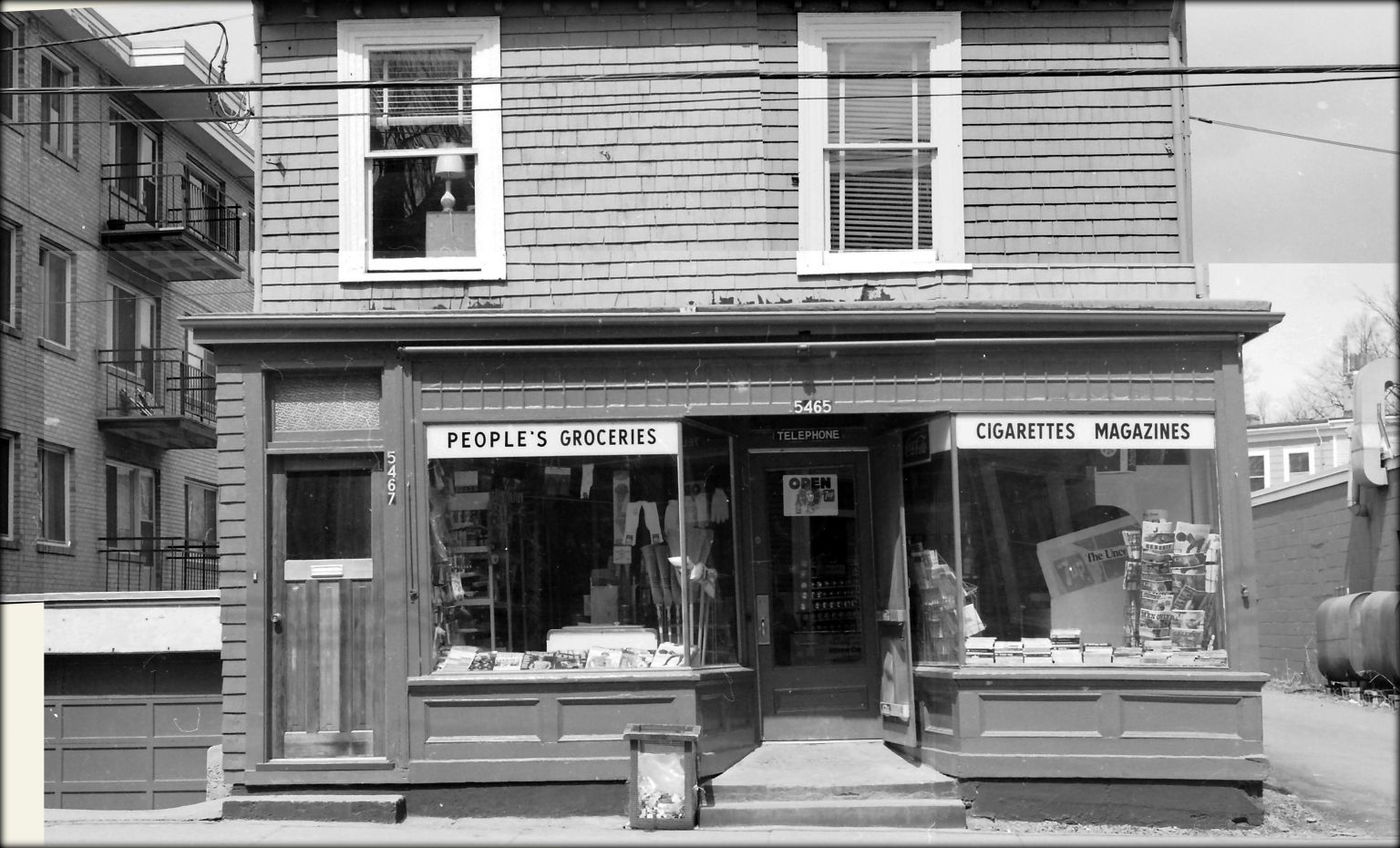 By 1980, the name had changed to Inglis Street Market, it was covered with aluminum siding, and there was another serious fire. Building inspectors and the Municipal Archives provide the evidence again. My vague memory of the fire is that it began in the shop area after the store had closed for the evening. 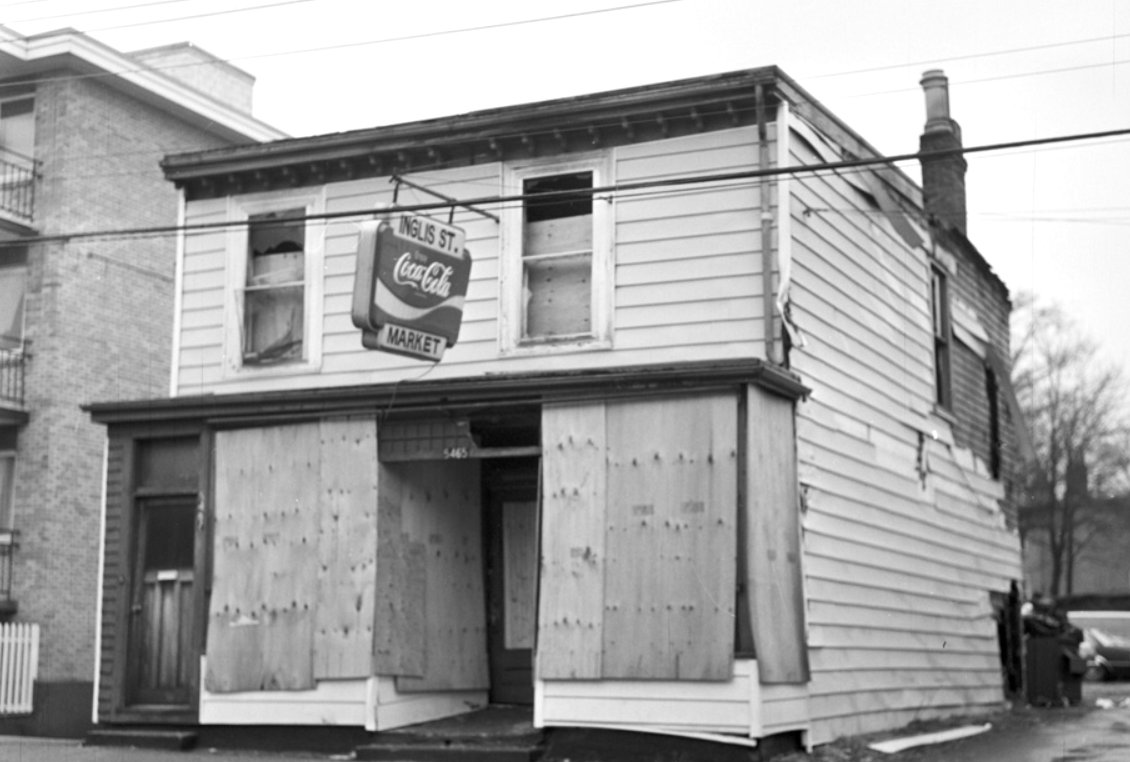 The rebuild was more interesting  than we expected . There was a curved entrance to the second floor apartments, and the shop front was recessed into the facade of the building. Street View shows it today, renamed Jerry’s Kwik Way. 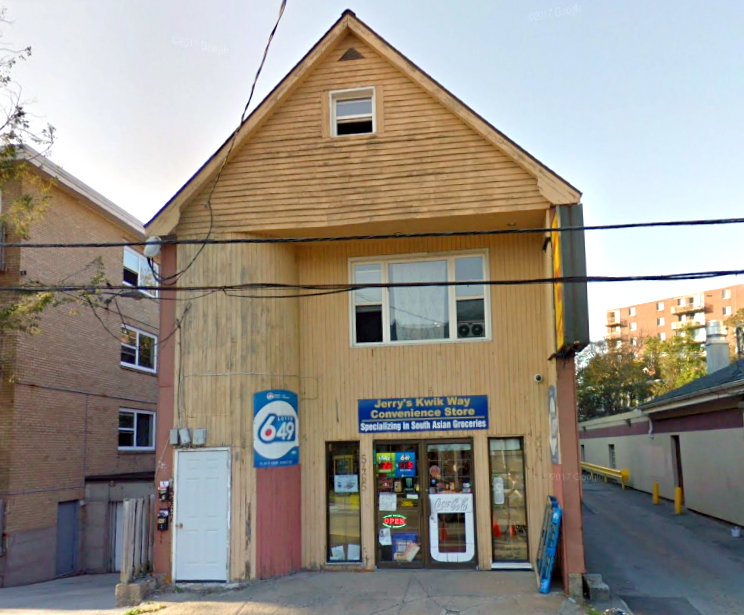 So fire was the agent of change, as it has been in cities for centuries. And what I think of as new buildings are nearly 40 years old. 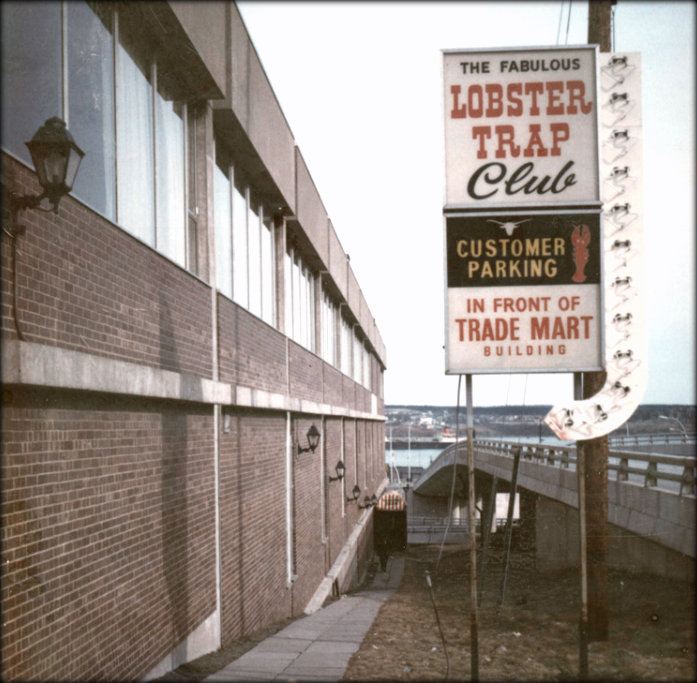