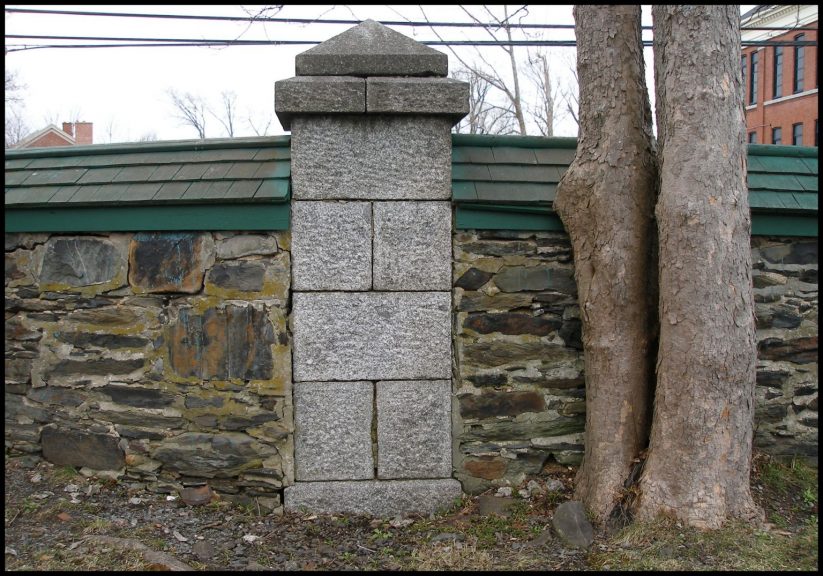 Do you like stone walls as much as I do? I think you might, so we are in for a treat, searching out and acknowledging some of the old walls of Halifax. I’ve been noticing walls around town for the last 40 years, and there are enough examples for two blogs. This one is about the more formal walls, where stones are held together with mortar (as if you were building a stone house). The next blog will show dry-laid stone walls, that tend to be more picturesque and are held together by cunning placement of the rocks and gravity.

It’s safe to say that Halifax has lost most of its stone walls over the years. This 1860s photo of Barrington Street shows a moment of wall transition. In the centre a high wall conceals Government House. In the foreground, in front of St Matthew’s Church, and across the street around St Paul’s Cemetery are brand new, see through, iron fences that have replaced tall, opaque, walls. Times were changing. 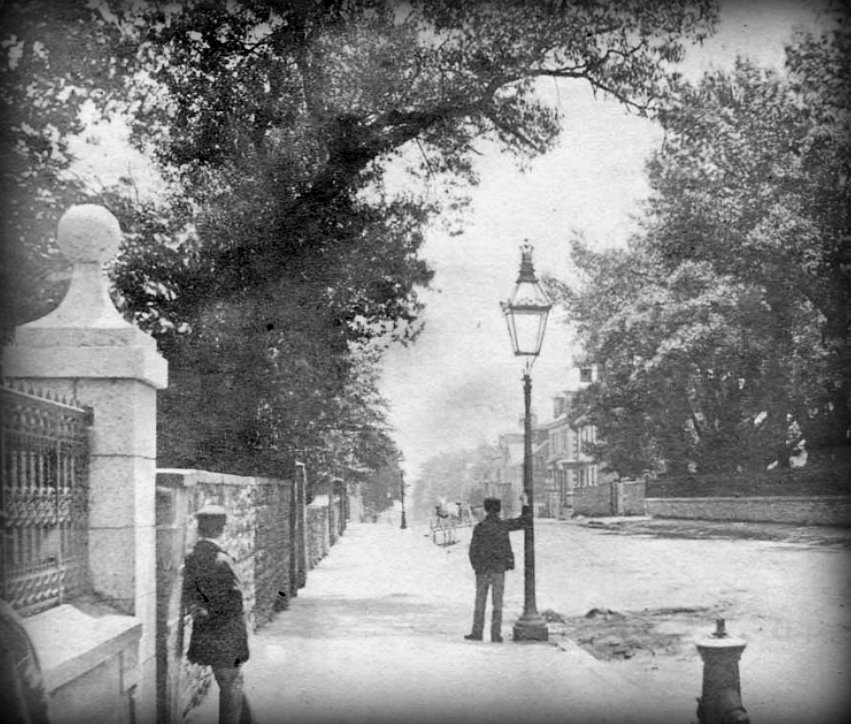 Here is a reminder of what this scene looks like today.  The iron fences have survived 150 years, but the tall stone walls are long gone. 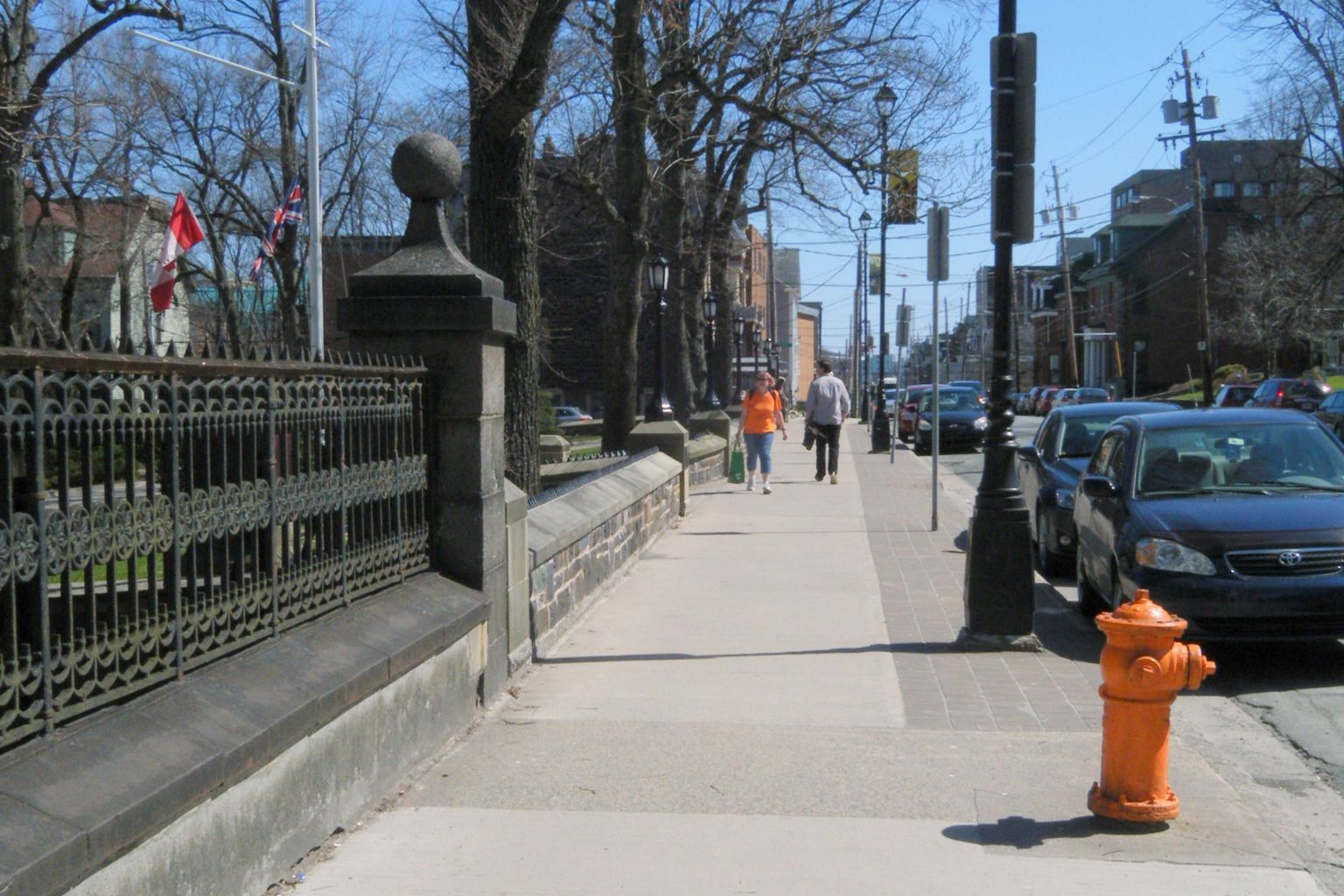 One of the longest mortared stone walls runs along Tower Road, protecting St Mary’s University. The wall was originally associated with the old Gorsebrook estate. The struggle to save Gorsebrook, a beautiful, Georgian-style house, lead to the formation of the Heritage Trust. The house was demolished in 1958. 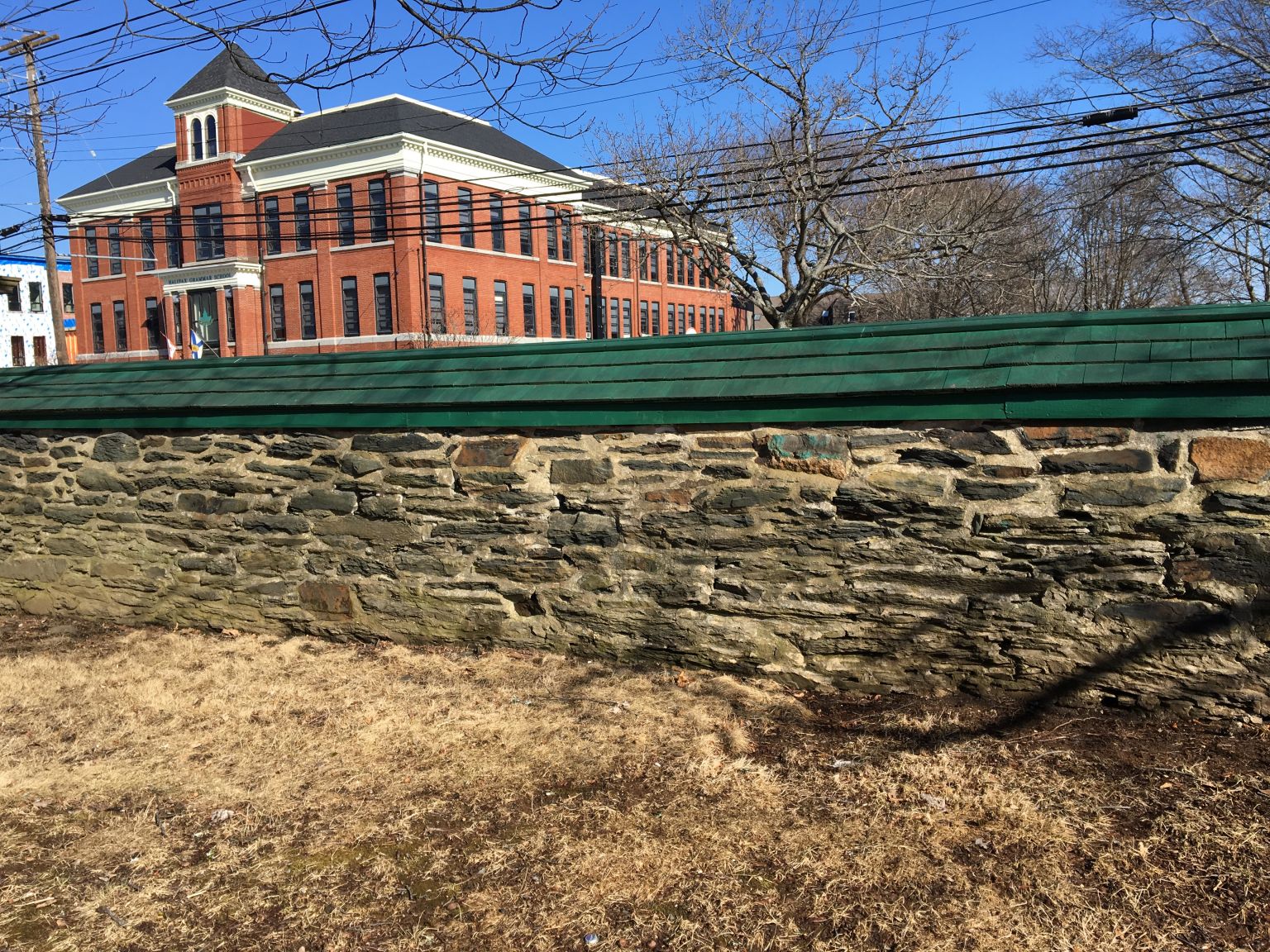 The view here is from the inside looking out, across Tower Road at the Halifax Grammar School.

A charming feature of this wall is its tiny, wooden shingled roof. In a city noted for the most freeze/thaw cycles of anywhere in Canada, water and ice are the enemies of these mortared stone walls. All of the walls you’ll see in this post have a roof or a cap to keep water from seeping into the masonry and blowing it apart. 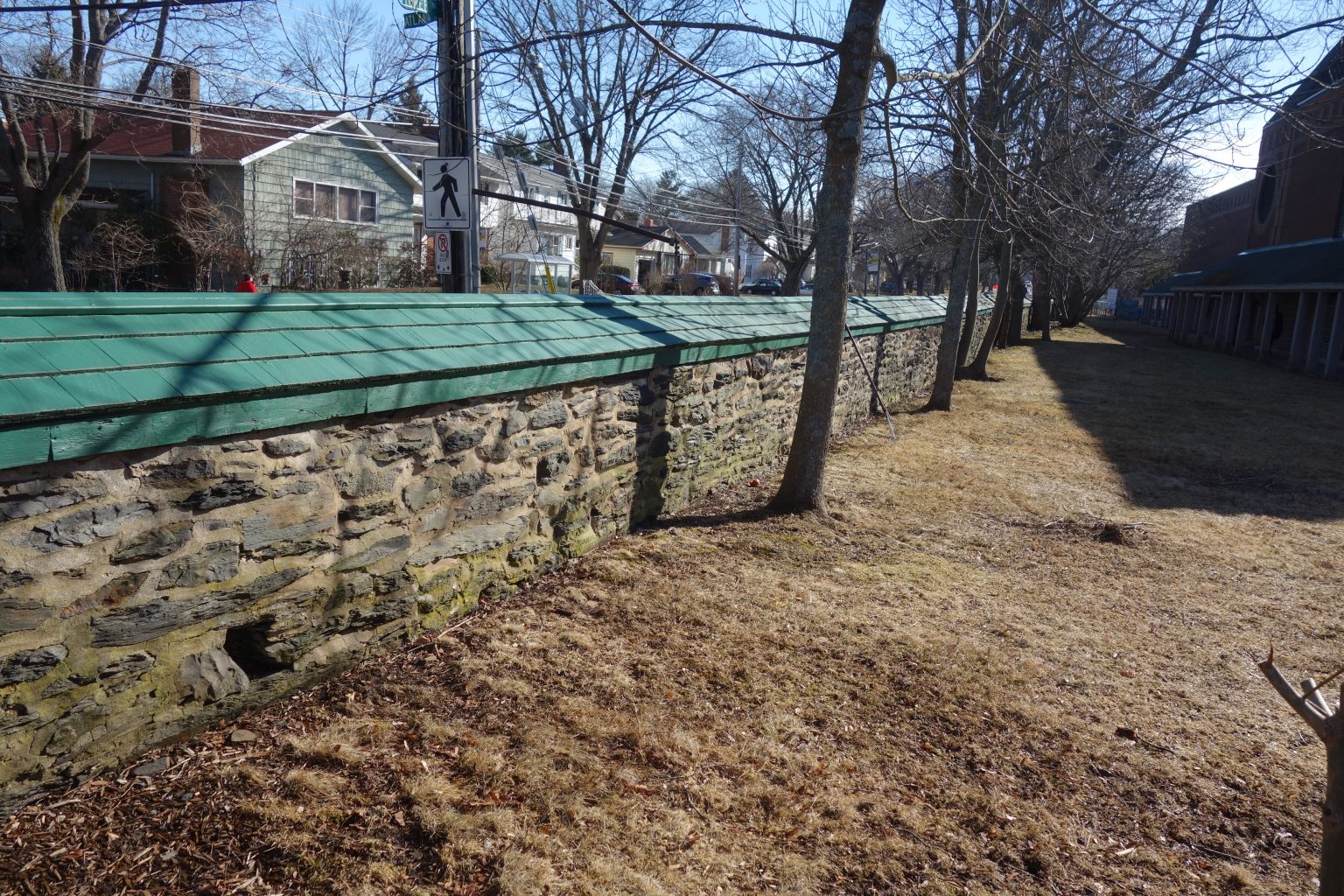 Gorsebrook was built about 1820. I don’t know the date of this wall but there was probably a wall of some sort from the earliest days.

A short section of old wall survives on the north side of Holy Cross Cemetery, on South Park Street. It probably dates to the mid-nineteenth century. When I took this photo in 1974, the wall provided several insights. Its little roof was covered with slate shingles that, with some maintenance, could last forever. The end post is cut granite but the wall (like all the walls in this collection) is local ironstone. Traces showed that at one point the ironstone was stuccoed, and perhaps coloured to look like the more desirable granite. 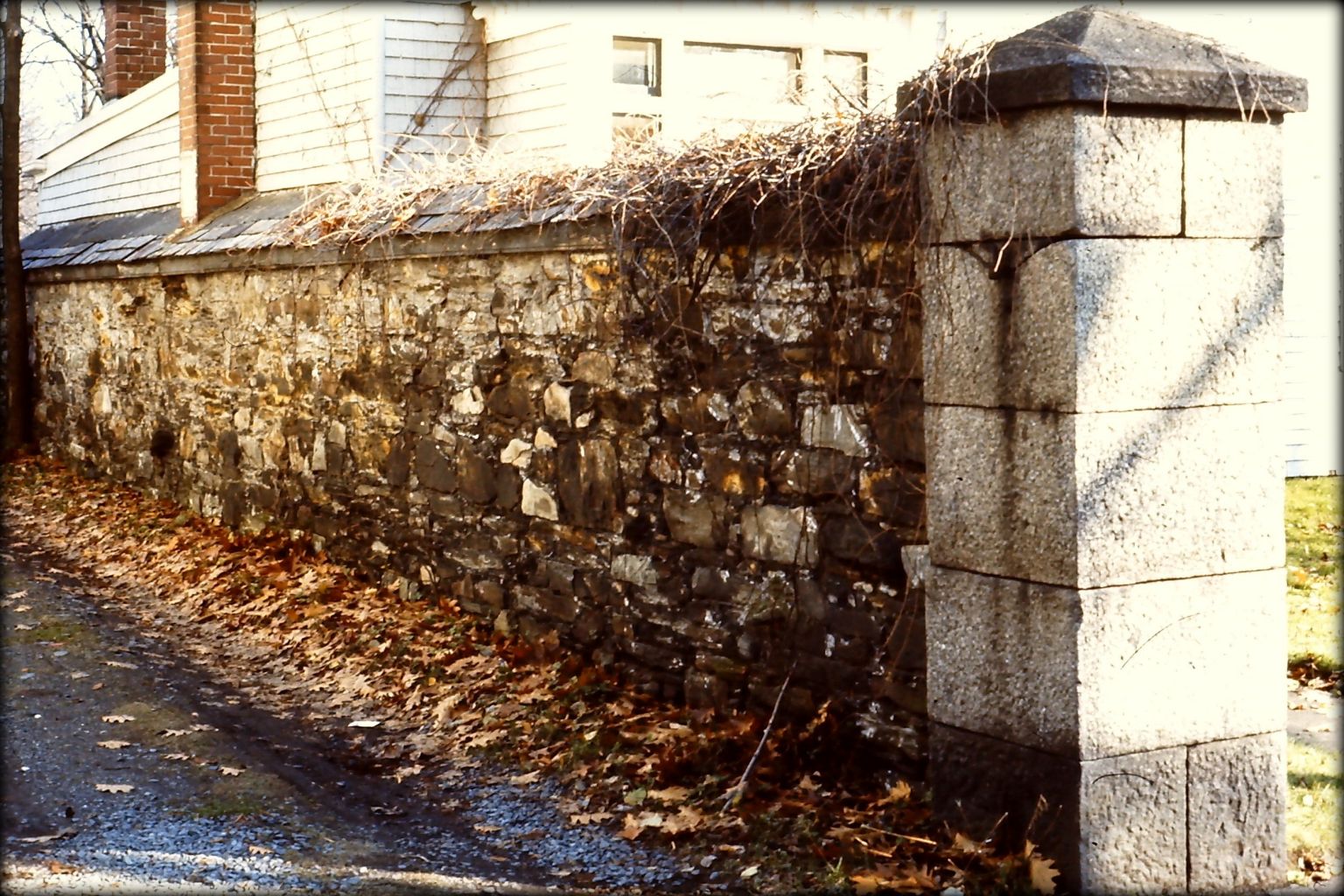 The wall survives but the indestructible slate roof has been replaced with a concrete cap. 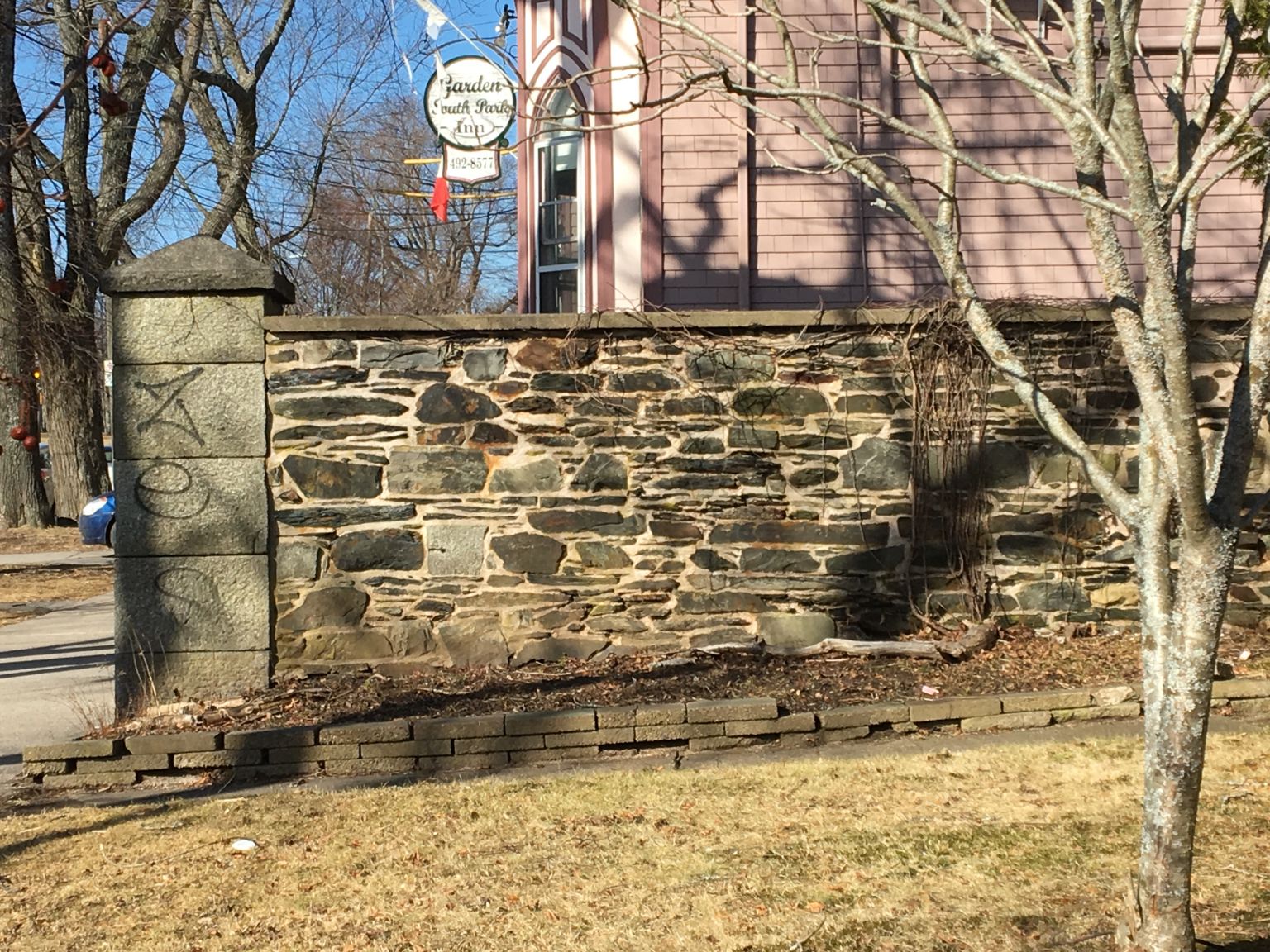 Perhaps the last tall, domestic stone wall to survive, ran along Barrington Street at the corner of Tobin, and concealed the secret garden of a large, Georgian-style, early 19th-century house. 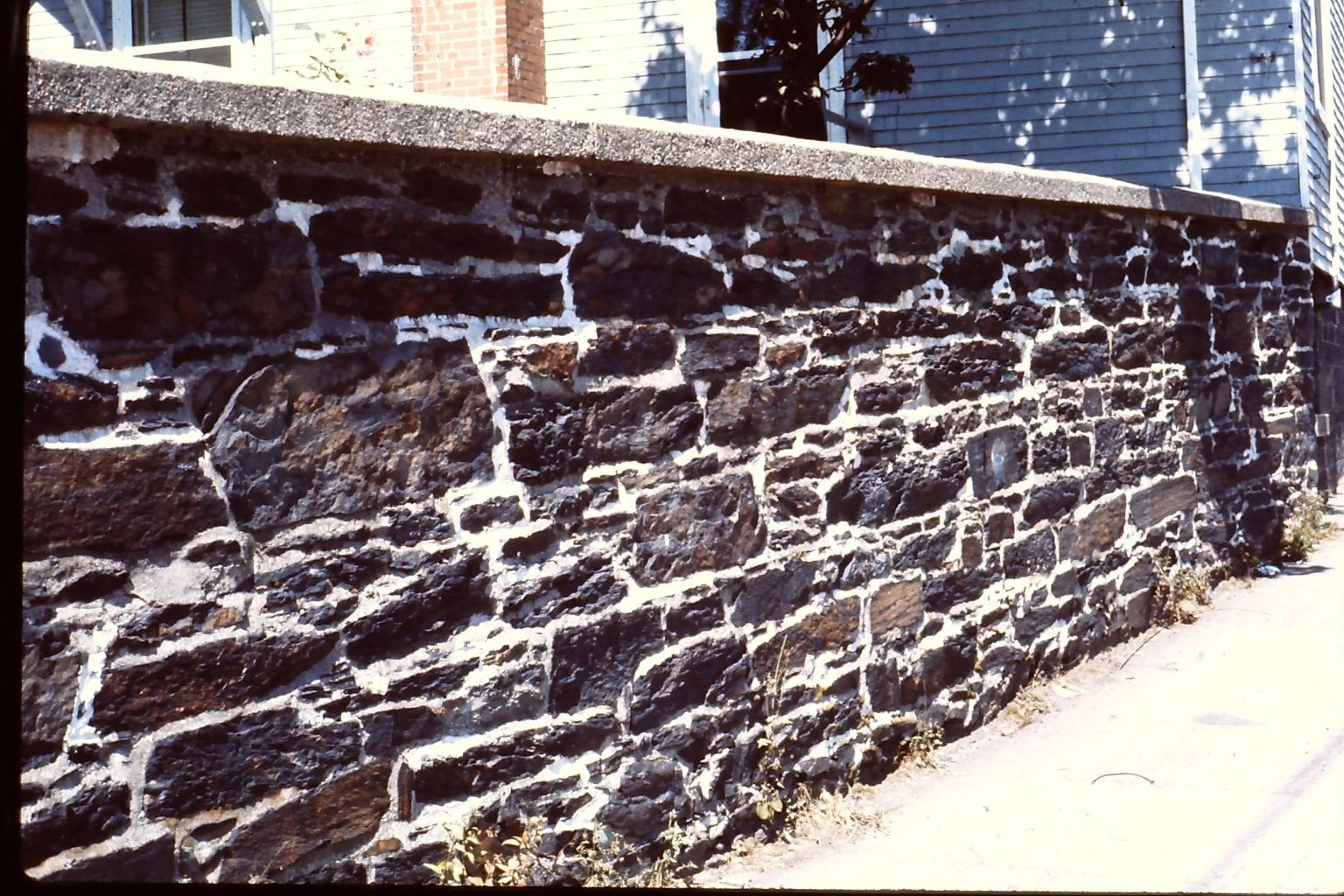 My 1977 photos of the wall and house foundation shows the hierarchy of stone use in old Halifax. The garden wall to the left is rough, quarried ironstone, whereas the foundation of the house is ironstone that has been precisely shaped, with great effort. The  corner of the foundation and the window surround are granite, a more attractive and higher status stone.

The house was demolished and replaced by one of the dreary apartment blocks that line the south end of Barrington Street. A couple of years ago I was astonished to notice that a fragment of the old garden wall had been saved and stands awkwardly at the edge of the apartment parking lot. Someone went to a bunch of trouble to preserve this slab of wall, but it feels like an insult. 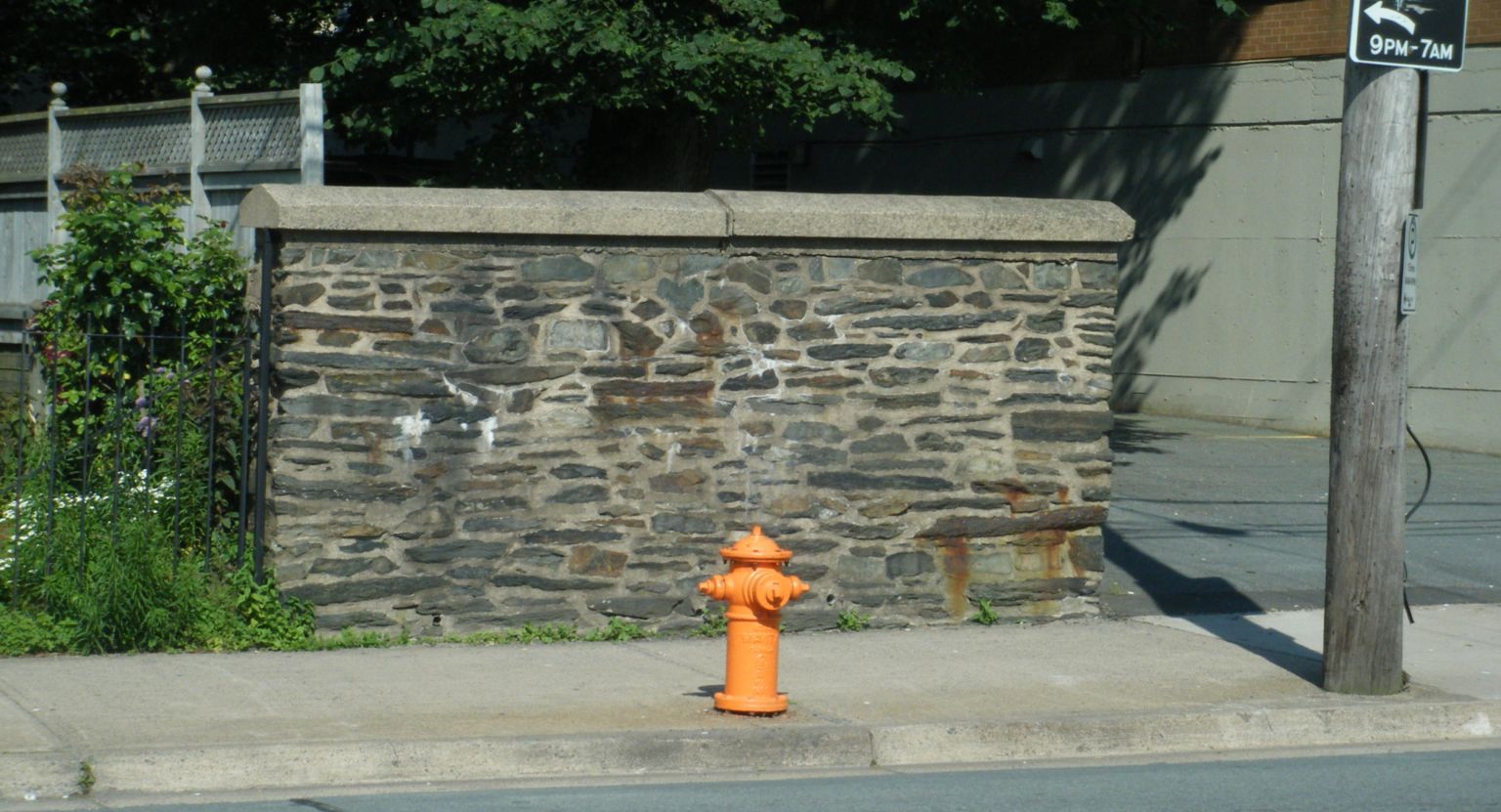 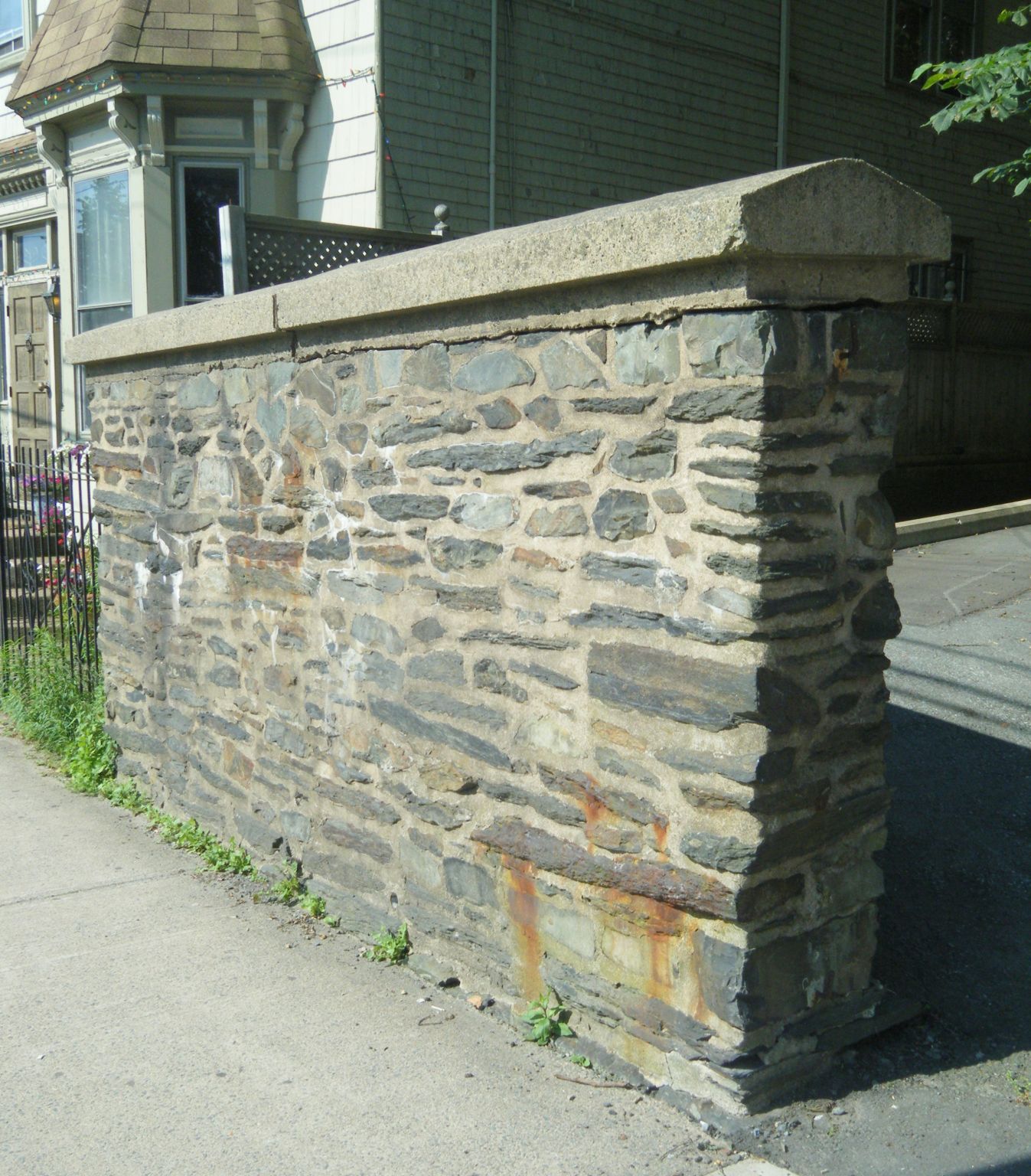 Sawing off a section reveals how how thin these mortared walls can be. The awkwardly scaled concrete cap is new.

This stunning wall disappeared without a whimper in the 1980s or 90s. It was on the Gottingen Street edge of the Canadian Forces Base. Every time we lose a feature like this, the energy level of the city drops (and a kitten cries in pain). 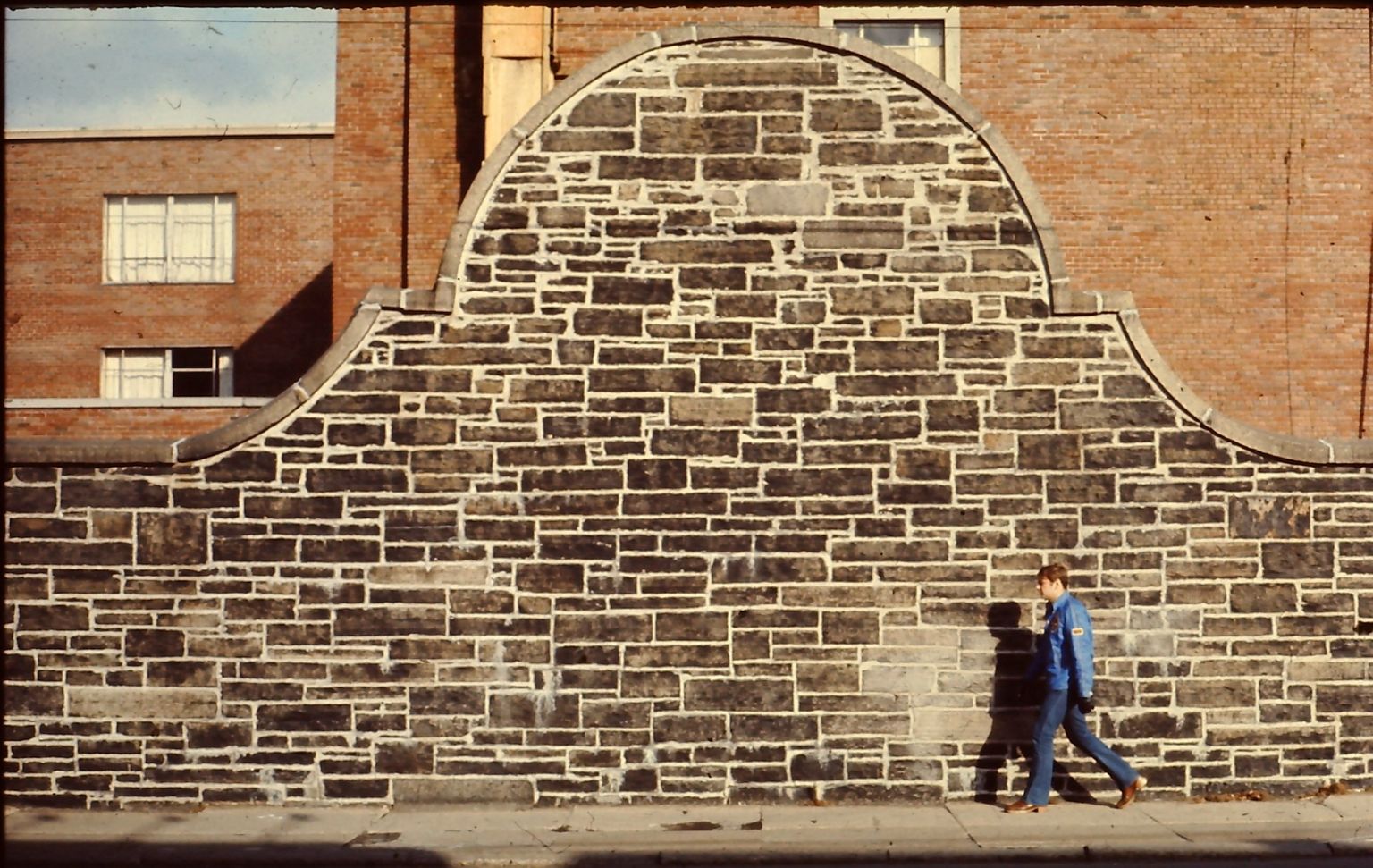 The odd shape to the wall was apparently to conceal buildings that abutted it. Fascinating to see that the silhouette changed over time. 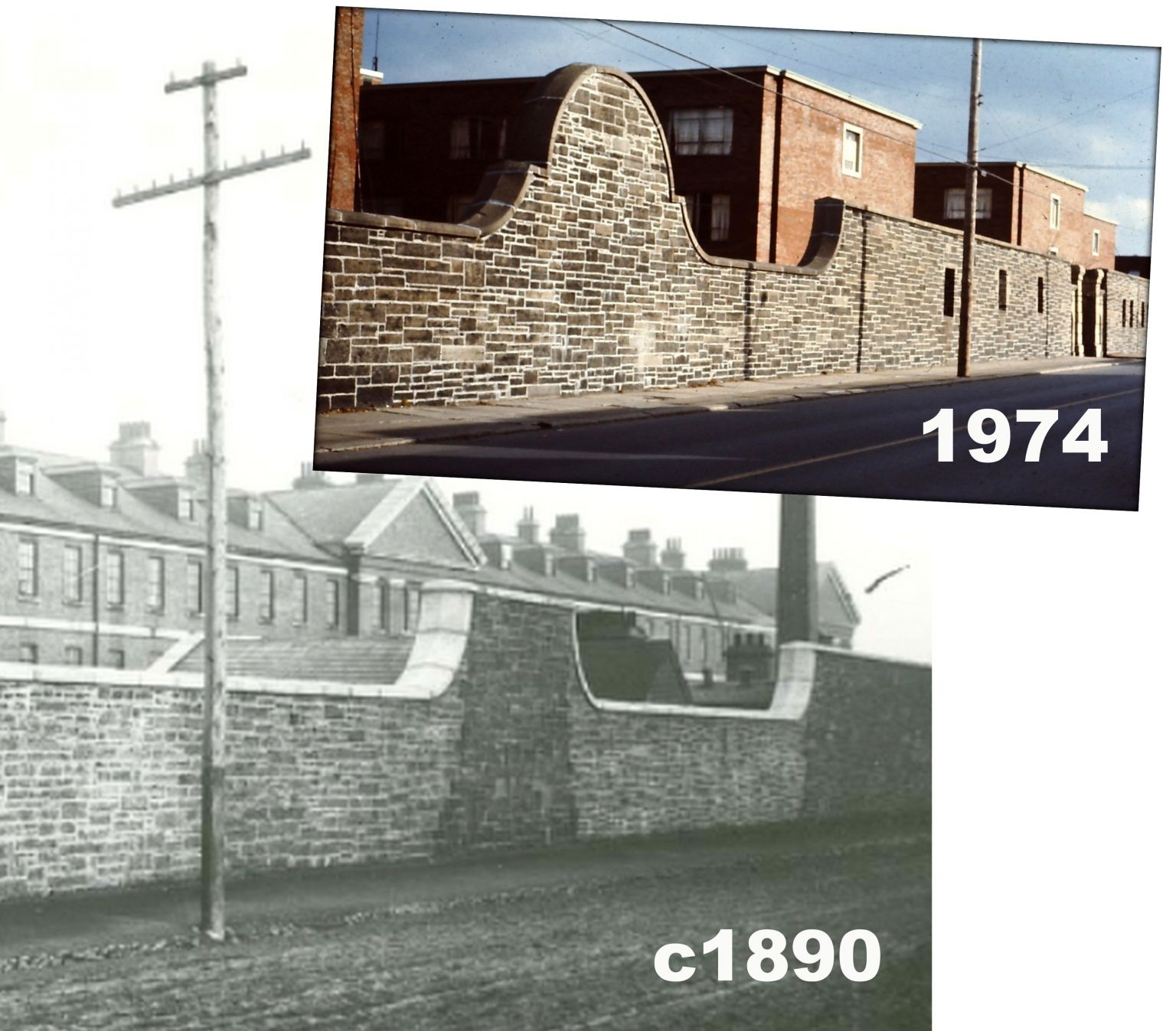 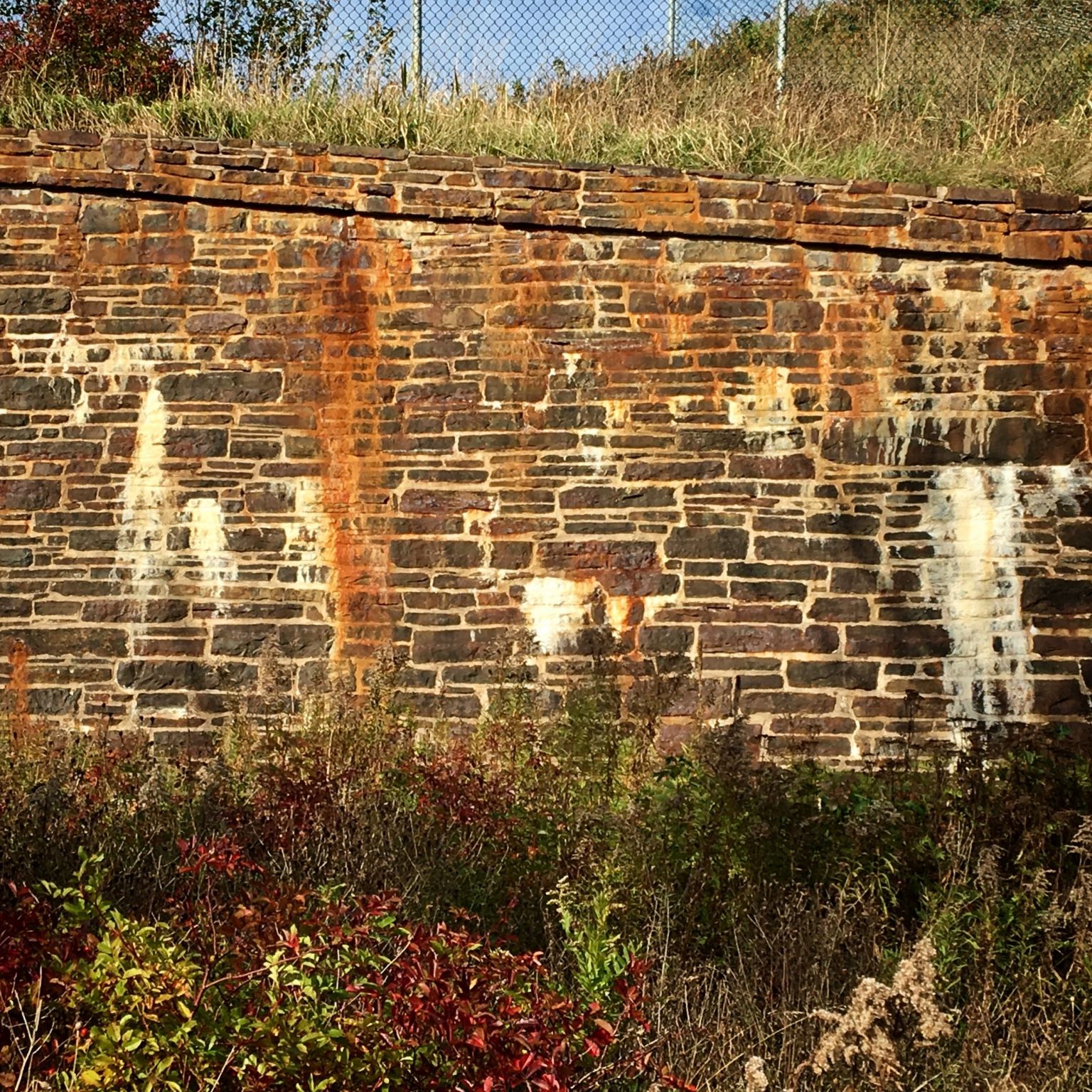 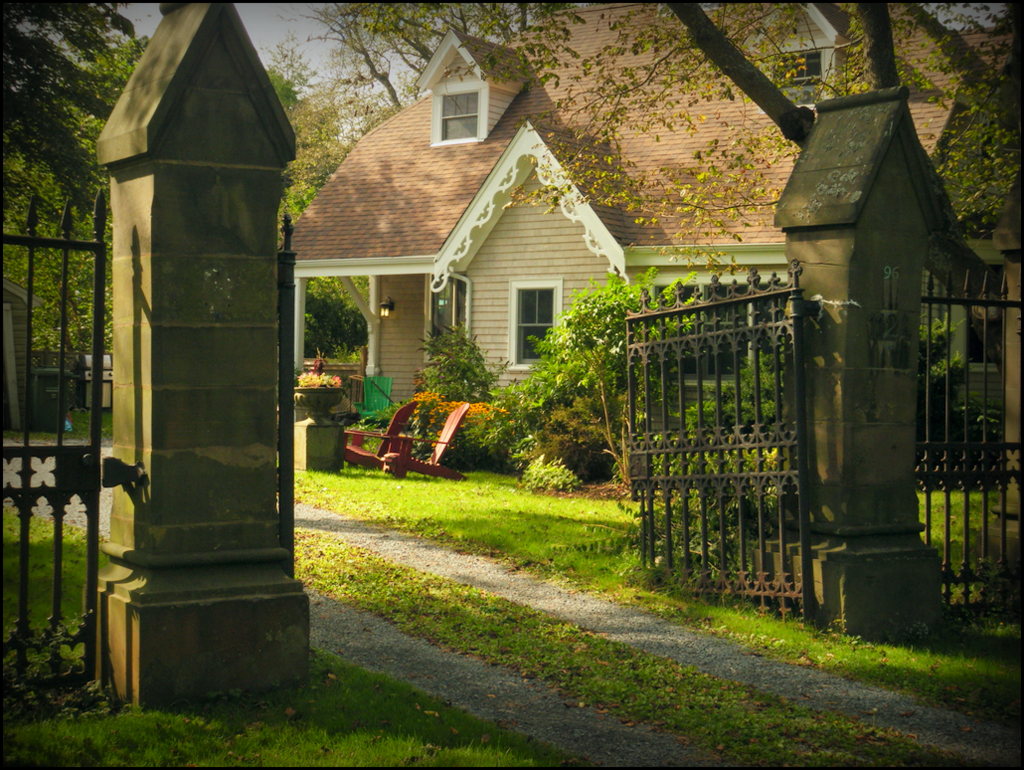