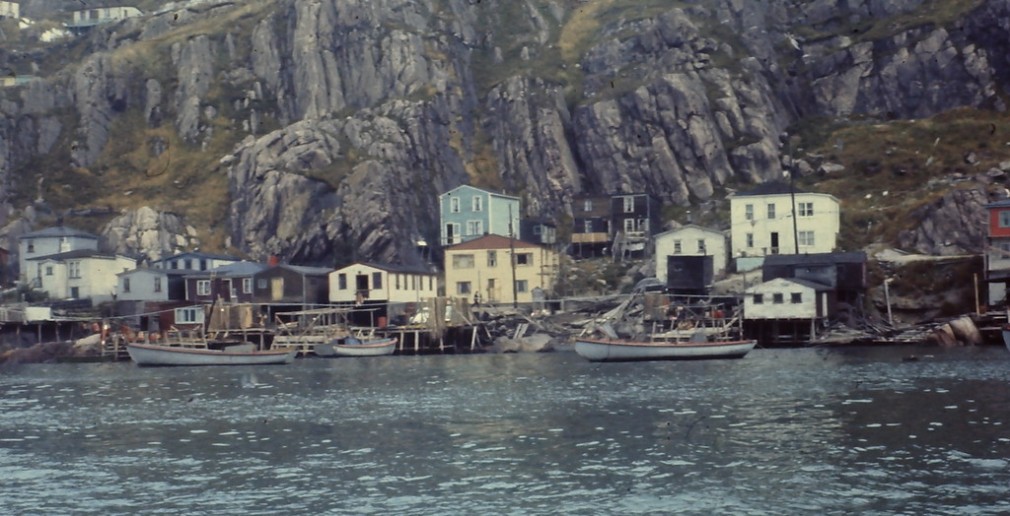 It was impossible to unsee the recent images of a car hanging to the side of Signal Hill in St John’s, Newfoundland. The car looked so tiny and foreign against that giant mound of rock. Got me remembering when I worked on Signal Hill in the summer of 1966 (50 years ago but who’s counting). If you are interested I can show you some snapshots of my youthful adventure.

I had a summer job working on an archaeological excavation to investigate early 19th century British military buildings. When the sun shone the site was spectacular. But often the fog was so thick you couldn’t see 100 feet and the wind was so strong that we were issued goggles to protect our eyes from blowing dirt. Where the grass ends was a direct drop onto rocks, far below. The Mounties took us up in their plane to take photos of the setting. The arrow points to our excavation site, just below the parking lot for Cabot Tower. St John’s protected little harbour is beyond. Parks Canada had hired two senior archaeologists from the American south (like Texas) and I was the inexpensive local site assistant from Halifax. The Texans had rented a house on Queen Street and I lived with them and their wives. Parked in front of our house is the new powder blue Mustang of my colleague Ned. The first fastback I’d seen. Every morning I crunched in the back for the ride up Signal Hill. Once we hired a fisherman from the picturesque community at the base of Signal Hill to take us just outside the harbour mouth to watch nets being pulled. Lots of hard labour and lots of fish. The major civic holiday of the summer was the Regatta on Quidi Vidi Lake. This event had been happening since the early 19th century and involved racing shells with six rowers. The huge crowd seemed particularly interested in meeting each other and visiting the booths set up by communities and groups. The best game of chance I’ve ever seen was a large table edged by boards with numbered holes. Each hole had a carrot sticking through it. The crowd bet on their favourite carrot and then a rabbit was released. The first carrot to be nibbled won. The waterfront was always interesting. The Portuguese White Fleet of fishing vessels came to port and sailors played soccer on the quay (the first time I had seen soccer). Bluenose II, still owned by Oland’s Brewery, also made a call. At the end of summer I took the Bullet back to Nova Scotia. It turned out to be a harvest special – recruiters had given tickets to Ontario to people who would work picking and processing fruit and vegetables. These folks were in a mood to celebrate and were restricted to the first cars of the train. I recall their dismay when the train left a community and buddy who had taken a pool of money to buy beer had not returned. There was rejoicing when the train reached the next community. Buddy was waiting beside the tracks with cases of beer. When he missed the train he hired a taxi and raced ahead. That’s why it was called the Bullet. It was a great summer job . Here I am on the left waiting for my ride in that small Mountie plane. I had lots of time to myself. Here is the sort of shaky time exposure a 19 year old takes from his bedroom window on a wet summer night.