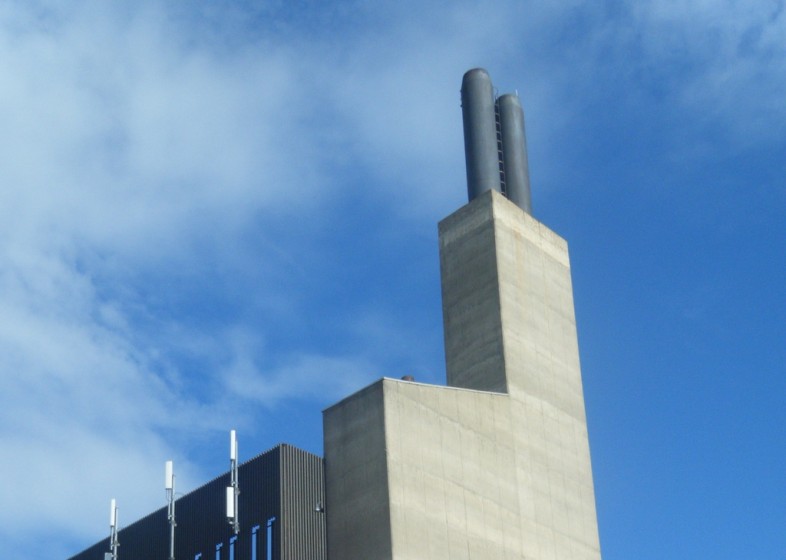 Have you noticed that people are going mad over mid-century concrete architecture? The architectural style is popularly known as Brutalist but it is equally popular to say that it shouldn’t be called Brutalist. A recent book that celebrates concrete buildings in Boston likes the term Heroic. I enjoy looking at thoughtfully designed concrete buildings around Halifax and don’t worry too much about name calling.

Last year I led a Jane’s Walk to look at some concrete buildings on the Dalhousie University campus and I’ll revisit some of them in this and future blogs. Let’s start with the most significant building you’ve never stopped to admire: the Central Services Building that stretches between Seymour and Henry Streets. It is the service centre of the campus, housing electrical transformers, heating plant, offices and classrooms. Its defining feature is a monumental wall of concrete topped by a pair of black smoke stacks. I was around Dal when the building was constructed in 1970, but I didn’t pay it much attention. Then a few years later I read an article about important recent buildings in Canada. The only example from Nova Scotia was the Central Services Building. I didn’t understand why but it got my attention.

There is not a lot of writing about modern architecture in Nova Scotia but conveniently the Central Services Building was included in Atlantic Modern, a 2004 book by Steven Mannell. He includes this oh so beautiful architectural rendering. Notice, above, how the loading bay to the right is articulated as a separate building, almost a miniature copy of the main structure. Below you can see how that pod is pulled away from the massive wall to provide an entrance into the building. Sweet. Steve Mannell observes that the the building is surprisingly well mannered and relates nicely to its neighbours (I wouldn’t be surprised if neighbouring people were less enthusiastic). There is a little ambiguity about where the design concept for the building came from, and Steve Mannell notes a kinship to the stacks on the 1964 concrete megastructure, Scarborough College in Ontario, designed by John Andrews. Dalhousie’s university architect, Jim Sykes, had previously worked with Andrews. The design reference that is really fun is to the Italian Futurists from the beginning of the 20th century, particularly the drawings of Antonio Sant’Elia (who died  in the First World War). He imagined vast industrialized cities that embraced a cult of the machine age. For a visual treat, check out more drawings by Sant’Elia. As you pass the Dalhousie campus acknowledge the stacks reaching above the surrounding landscape and maybe make the effort to walk around the building. The more you look, the more you see. Concrete buildings of the 60s and 70s are showing their age and the Central Services Building is a good example. The eastern smoke stacks are missing (or maybe they were never installed). The concrete and metal of the building could stand some care. Landscaping of Brutilist buildings has often been neglected or is inappropriate, and in this case is absent. And to add insult, a particularly banal concrete parking garage has bumped into the north side of the Central Services Building with a total lack of respect to its elder.