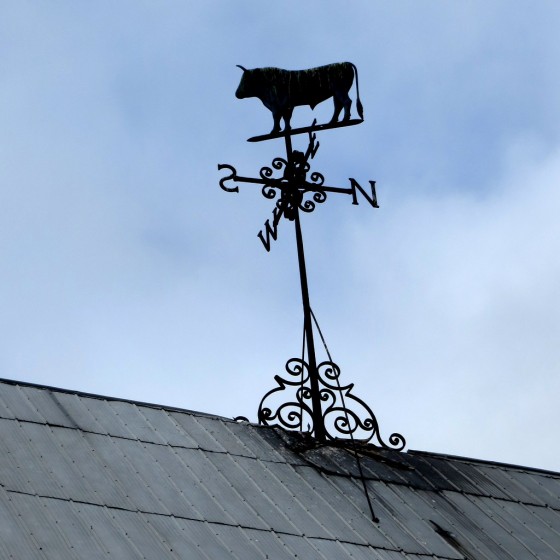 Have you noticed news coverage of winter storm damage done to the big barn on the Van Horne estate near St Andrews, New Brunswick? Even before the recent troubles there was a fund-raising drive to stabilize and restore the 1899 building, and it certainly could use some help. In the fall of 2013 we visited the barn on Ministers Island and this is an excuse to show some snapshots. The estate was the summer home of Sir William Van Horne, who headed the CPR when Canada was finally connected by rail from sea to shining sea.

Van Horne dabbled in architecture and apparently designed the barn in association with real architect Edward Maxwell in a self-consciously picturesque style. (Maxwell designed bits of the most picturesque building in Canada – the Chateau Frontenac in Quebec City). The smaller building in the foreground is the dairy.

Inside the barn are big spaces well-lit by by many windows. The old paint surfaces are a treat and it feels like the perfect venue for long table meals decorated with milk buckets full of wild flowers. Any description of the barn I’ve read mentions Van Horne’s herd of “prizewinning Dutch Belted cattle.”  There were also prizewinning horses and pigs. Here are awards for something. The areas of the barn we visited were quite empty but there was this vehicle, maybe for picking up folks at the Bar Road railway stop. Milk was piped from the barn to be processed in the cool, stone walled creamery. Isn’t that the prettiest and strangest little building you’ve seen on the Fundy? When the Van Hornes were back home in Montreal milk, butter and cream would be sent to them by train. That’s what happens when you run the railway and own prizewinning Dutch Belted cattle. And a few snaps of the house, Covenhoven (say that a few times). My favourite view are these shingled gables. The house was added to several times so it tends to the rambling. Did we mention 50 rooms? Billiard tables might be one of the few pieces of furniture that sticks with a big house because their slate base makes them too heavy to move. Most of the house is empty, which is probably the best way to enjoy the spaces. Wouldn’t this be a perfect hall for riding your tricycle to meet the twins? The shore-side bath house, completed in 1912, is another romantic conceit. Panoramic views above and change into your bathing costume below for a dip in the saltwater pool. Ministers Island is a real island with the special benefits that Fundy tides offer.  You drive over at low tide – so access times change a little every day. St Andrews has been a tourist destination area for well over 100 years and you should consider a visit too. We have stopped by several times in the last few years (particularly to eat at the Rossmount Inn). You may not be attracted to visiting the homes of dead, rich, white men but Van Horne’s place is a particularly charming example. The picture alone was apparently a sufficient  message for whoever sent the card to Miss Morse of Lynn, Mass. in 1910. And at the Mount there was a haha wall (Google that) to keep prizewinning cattle from wandering into the pleasure gardens.