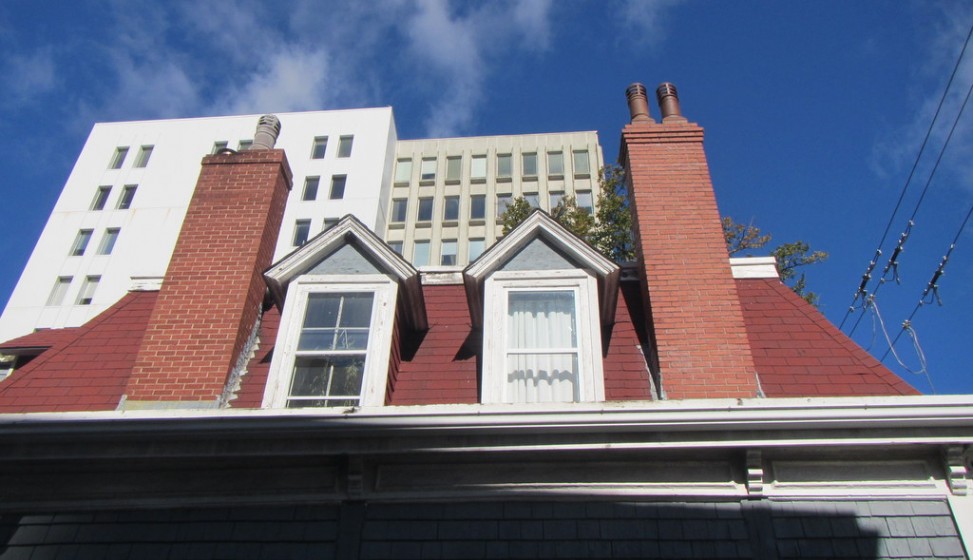 A couple of Saturdays ago I had some errands in the Spring Garden area and used the opportunity to look around a little.

Our developers had just announced their intention to erect a building at the corner of Brenton and Clyde Streets and provided this dramatic concept drawing. Have you noticed the trend  to show buildings at  twilight with all the lights turned on? And this one is right after a shower. Makes me want to sing. After all that lifestyle drama I thought it was useful to see what the site looks like now. Well wired. I remember when these little three story apartments were built here and there in the South End around the early 60s. Densification before we could speak its name. This one actually has a whiff of modernism. My Twitter friend Andrew is a fan of the reverse painted, gold typography often used for the names of  these apartment buildings. The Old English typeface once was intolerable but I’m softening (just a little) in my own old age. A couple of typical Halifax style houses would be removed for the new development. Friends once operated an attractive “country” lifestyle shop in the left building. The most interesting building on the block is this Mansard roofed house. A couple of our friends lived  in it during the 80s. Some great candle lit meals. In the developer’s concept illustration the building to the right is this precast concrete number that has never looked better. Surprised me. On the walk down Morris St to my car, I paused to look at this building that I believe Dalhousie now owns. In the 70s a couple of friends lived in one of the top floor apartments with a sunny south facing bay window. The apartment had a vintage Murphy bed. The windows have sandstone keystones each with a different carving (now quite softened by age and cleaning).  Here’s a selection: a rose, thistle, oak leaves  + acorns and a bunch of grapes). Just down the street behind some other Dalhousie-owned houses is a small concrete building. In the 70s we would imagine a little building like this making a wonderful home. I guess the building must have been a workshop and perhaps dates from the early period of concrete construction. When you look closely individual pours of hand mixed concrete are obvious. This reminded me of the pounded earth construction we saw in Bhutan several years ago.  Women pound earth within a movable form while singing and shouting off-colour insults at any men who happen to pass by. What a great tradition. Here is an example of a small building we used to covet. Long gone, it was on the south side of Prince St just below Brunswick. With the Nova Centre being built next door it is probably just as well not to be living there. Who wants drunk convention attendees passing out in your doorway.