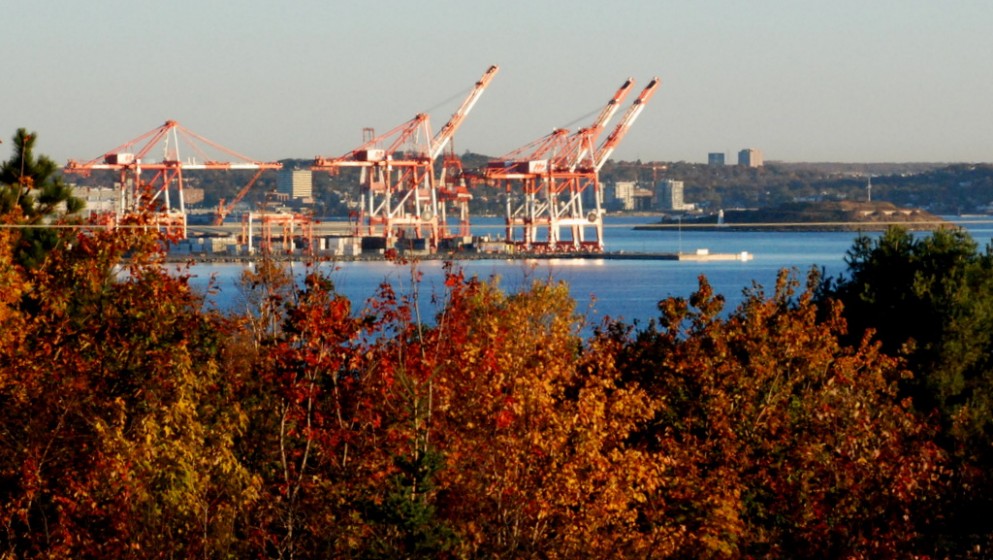 October is one of the good months; weather can be great, the September frenzy of back to school and back to life has subsided. Looking through my photos for the month I decided to attempt a visual diary of what we were up to (which goes on a bit).

The month started with the all-you-can-eat Oysterfest in a big tent on the waterfront. A first time to sample oysters from all the terroirs in NS, NB and PEI. There was a shucking contest that I didn’t take too seriously until I noticed the judges checking each oyster. And what do you do with all those shells? Buddy in PEI created an oyster Mobile and the ones we ate were going to mulch vineyards or something like that. After eating oysters for a couple of hours Sheila wanted some frites and Stillwells handled that very nicely. Forget about the hoverboard fail. If Back to the Future had said we would be in a Barrington St bar on a Saturday afternoon in 2015 eating Tart Tatin with a homemade marshmallow  topped by a caramelized sugar thing, well we would have said they had gone too far. Who knew the future would be so tasty. The must see show of Allen Ginsberg photos is at the Mount St Vincent Art Gallery until November 8. For us 60s folk, Ginsberg was an icon we didn’t know too much about. More recently he would visit Halifax because of his connections to the Buddhist community. I once went to an event where he played his harmonium.

Early in the month we attended a choral reading of Ginsberg’s most famous poem Howl at the gallery. A great turn out on a Saturday evening. Here are a couple of architectural details to enjoy: a beautifully detailed concrete side entrance to the Seton Building at the Mount and a bronze window surround on the  former Eaton’s Building that the Province prefers to keep anonymous. Back on the local food front, Lion and Bright launched a new menu and we were there to sample its goodness. On a morning ramble I experienced guns and dahlias. I finally stepped into Royal Artillery Park to look at their collection of ordinance (try it someday). In the Public Gardens the dahlias were finishing. I think dahlias are often a little over the top but cool people seem to be gaga over them so I’m reevaluating my position. How about that election! The real estate signs are now more obvious but those Please Slow Down signs mean we have political signs 24/7. The day after the election I dug out a poster for Justin’s father’s 1968 campaign. A powerful image before Warhol was ironic and a lifetime before Shepard Fairey’s Hope or Obey . The Ecology Action Centre is enlarging their Fern Lane headquarters. We are supporters of EAC and they invited us for a tour to see what is happening. It’s going to be great and you should consider supporting them too. The Halifax Examiner lists lectures at the universities and I noticed that local architect Omar Gandhi was giving a noontime presentation at the School of Architecture. Gandhi’s buildings seem to be popping up all over the place and had just been featured in the Globe and Mail so it was fun to hear his creation legend and learn about his design process. A BIG welcome on the front of the Architecture Building and when you turn around and look up Brunswick Street there is an under celebrated view of the Town Clock. Realized that earlier in the month I had snapped a photo of the clock up George St. Guess those 18th century planners knew a thing or two about siting. For contemporary urban planning we stopped into Viva City where you get to look at some of the new and proposed developments for the city. This event is organized every year by Fusion Halifax and it is wonderful to see new generations engaged in the city building process. Here is lead sponsor Jim Spatz speaking to the crowd.

Frank Palarmo from the School of Planning at Dal was the keynote speaker. Over the years we have loved listening to Frank because he is able to explain how the city should work and make it all seem possible.  A friend says she can’t listen to Stephen Lewis anymore because he always makes her cry.  We realized we now feel the same way about Frank, so left before he started.

How about the new BMO building at Spring Garden and Birmingham. Transparency at street level is good,  but when every window has a view of the ass end of a printer, not so good. I can’t be too hard on them because few new buildings get that right (I’m looking at you Royal Bank).

Really though, we spent most of the month enjoying the fleeting splendour of October (and a week in Glasgow). A stroll around the Frog Pond was sublime and if the new mail boxes only last a season, it was the appropriate season. We don’t get many trick or treaters so it was swell to have neighbour Maggie drop by in her milk bone costume. And finally,  our view of a sunrise as we enter a new month with a new time . I bought new snow shovels because you know, the FUTURE.