What are the Halifax icons? The Town Clock for sure,  aerial views of the harbour are popular, a dripping donair (relax I was only kidding). Somewhere in this mix are the Public Gardens often represented by their massive cast iron gates.

Like the summer houses in Point Pleasant Park  (that I blogged about recently)  these gates were manufactured by the Walter Macfarlane ironworks in Glasgow Scotland. The gates debuted at the south east corner of Gardens in 1907 but they had enjoyed a previous relationship. 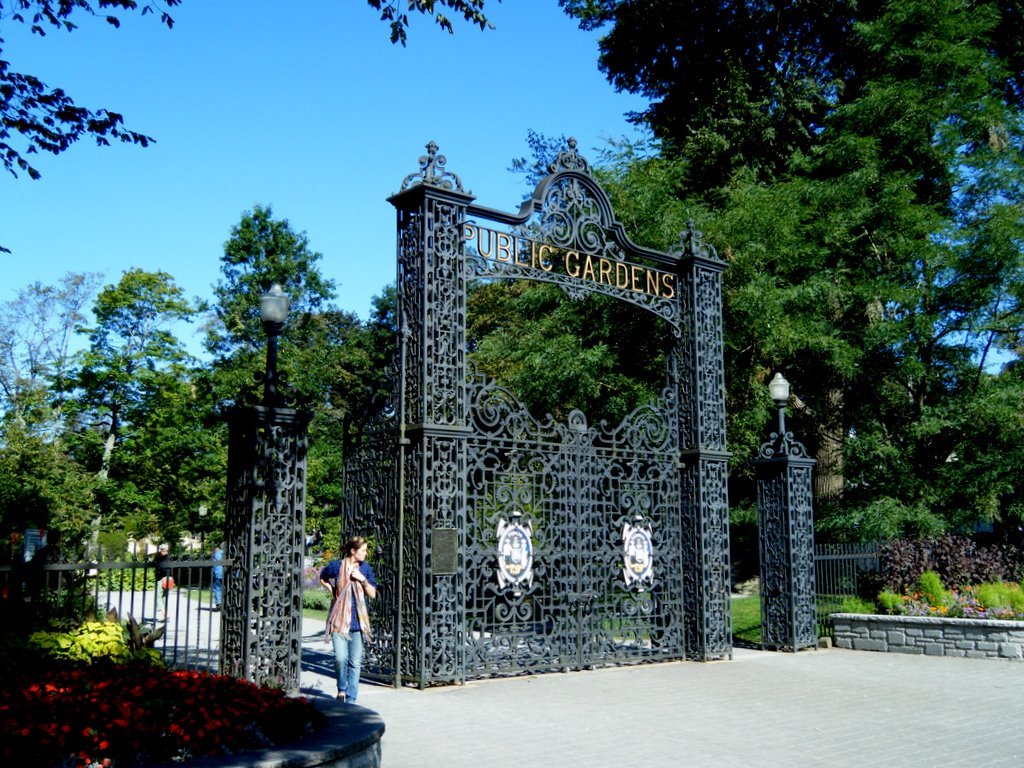 In 1889 an extraordinary wooden entrance building for the Gardens was constructed on South Park St. This lined up with the major path that divides the older southern part of the Gardens from the newer northern section. 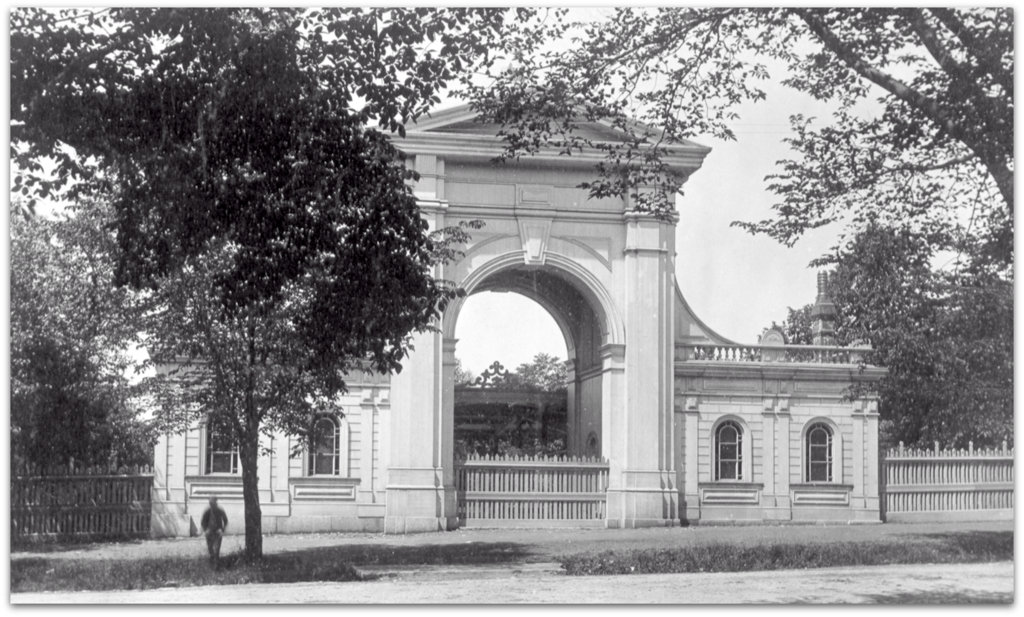 Quite an arch! There was a canteen and ladies’ room to the right and an office and meeting room in the left wing.  Notice the high wooden fence that surrounded the Gardens and blocks the arch. Now look closely at the slightly younger photo below.  A corner of the entrance structure shows behind a big delivery sled. You can just make out the central swinging part of our iron gates with their familiar city coat of arms. 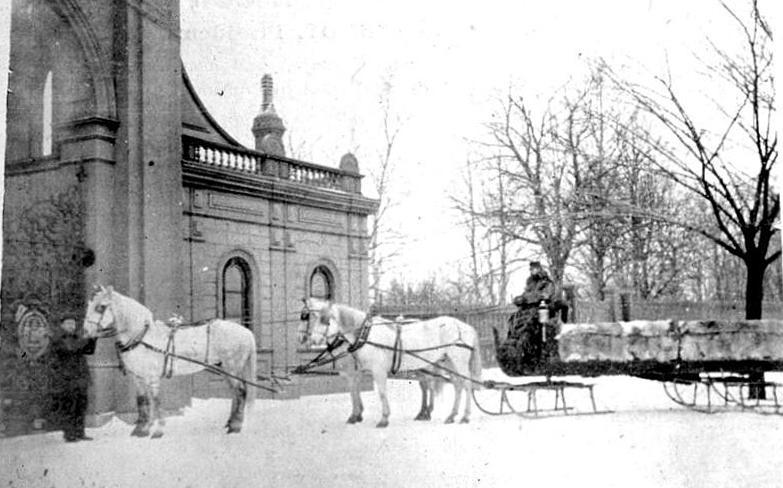 These were purchased for the new entrance building in 1890 from Macfarlanes for $600. It must have been a popular gate design because an example can be seen in a famous engraving of the Macfarlane showroom in Glasgow. They are the middle gates to the right in a vast hall of the best decorative cast iron in the world. 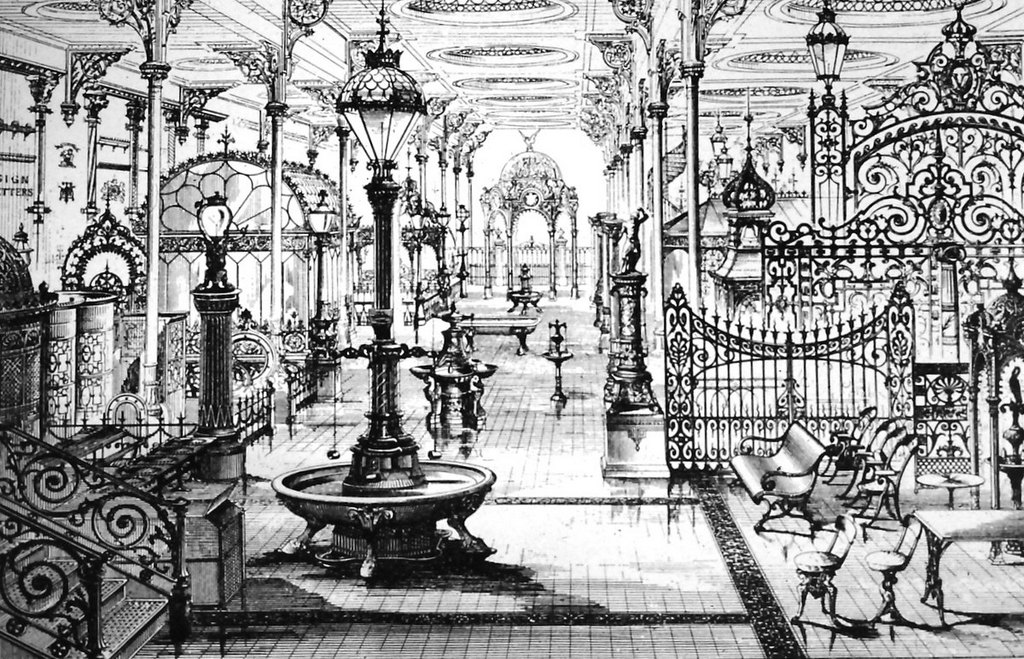 In 1907 the entrance building was demolished (for reasons I don’t know) and the iron gates relocated to their present position. At that time the iron fence was installed around the Gardens at considerable expense, but it has served us well over the last 100 years. New posts were required for the gates, and those and the arch with “Public Gardens” were also made of cast iron. 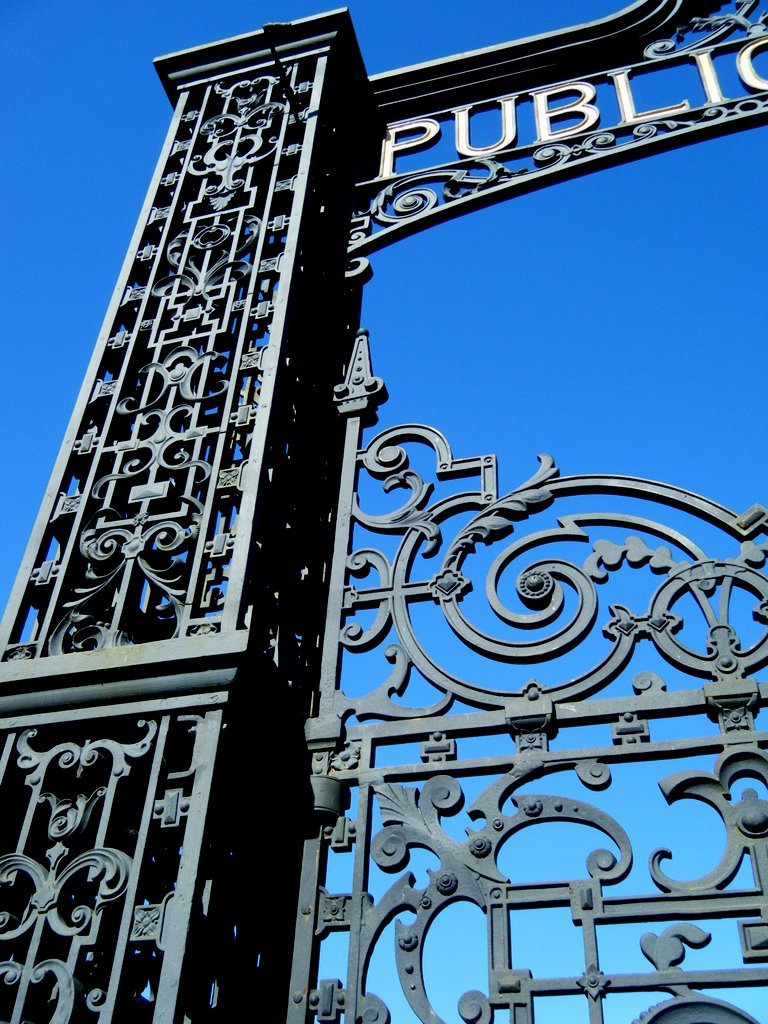 Take a look some time at how the design of the gates differs from posts that are 18 years younger.

Here is a catalog illustration of our gates that the board of the Gardens would have considered when they made their decision. When I sent photos of our gates to Macfarlane enthusiasts in Scotland their first comment was why are they installed backwards? That got me noticing that most iron gates have their high point in the middle. Not the way we do it in Halifax. 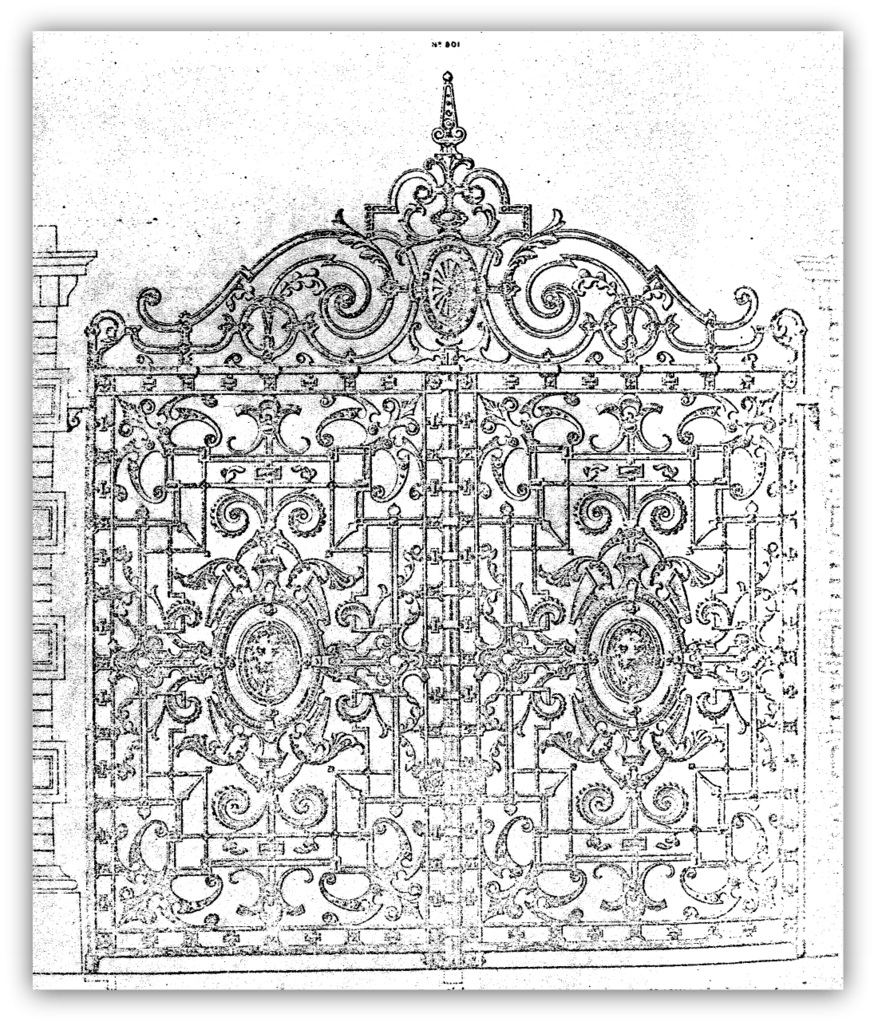 The iron coat of arms for the city in the centre of the big gates dates from the 1890 purchase and has a very sketchy representation of a kingfisher. 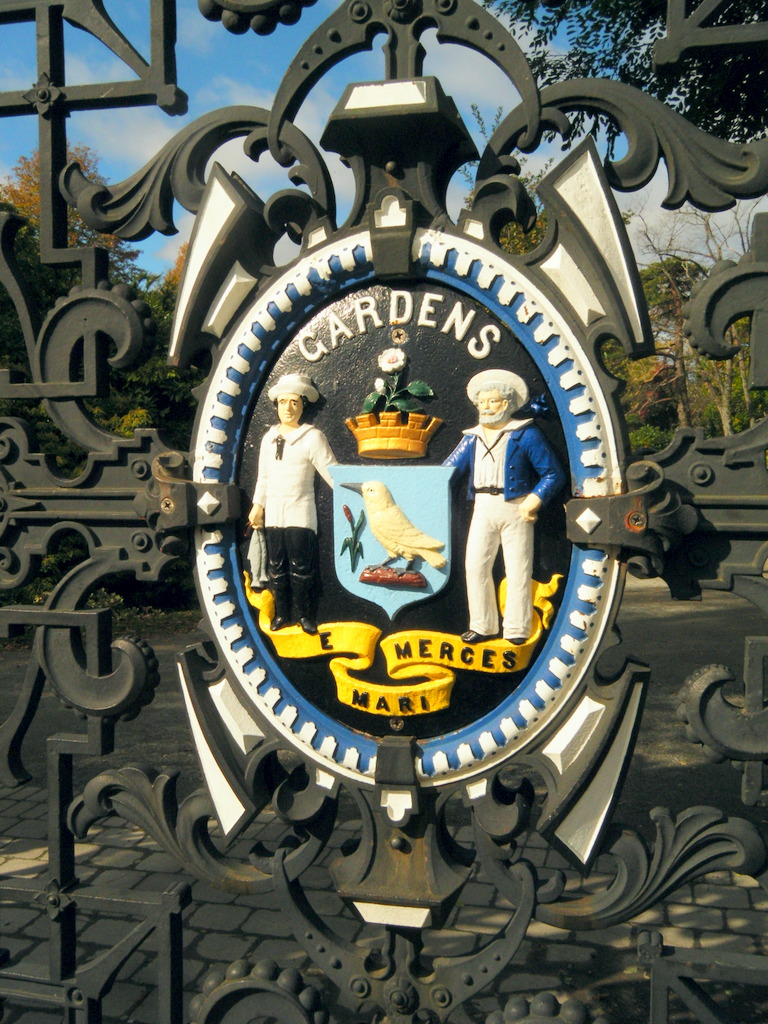 The gates were well restored after Hurricane Juan and the castings are very crisp. Pause and take a closer look; so much to discover.

And it also would be very appropriate to add some colour or gilding to the gates. This is common elsewhere and makes gates look much more spirited.  Here is an example I noticed in Glasgow last month with just some gilding. 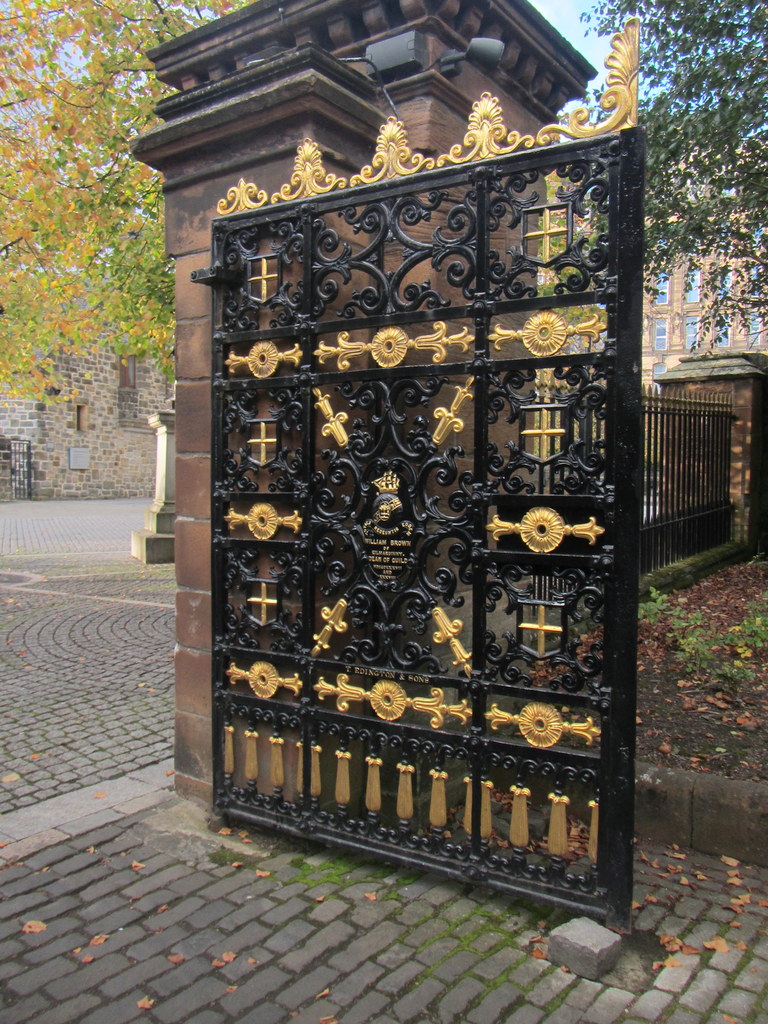 And remember how good the restored cast iron and zinc fountain in the Gardens looks with its new surface treatments. Cast iron needs paint for protection but it does not need to be black. 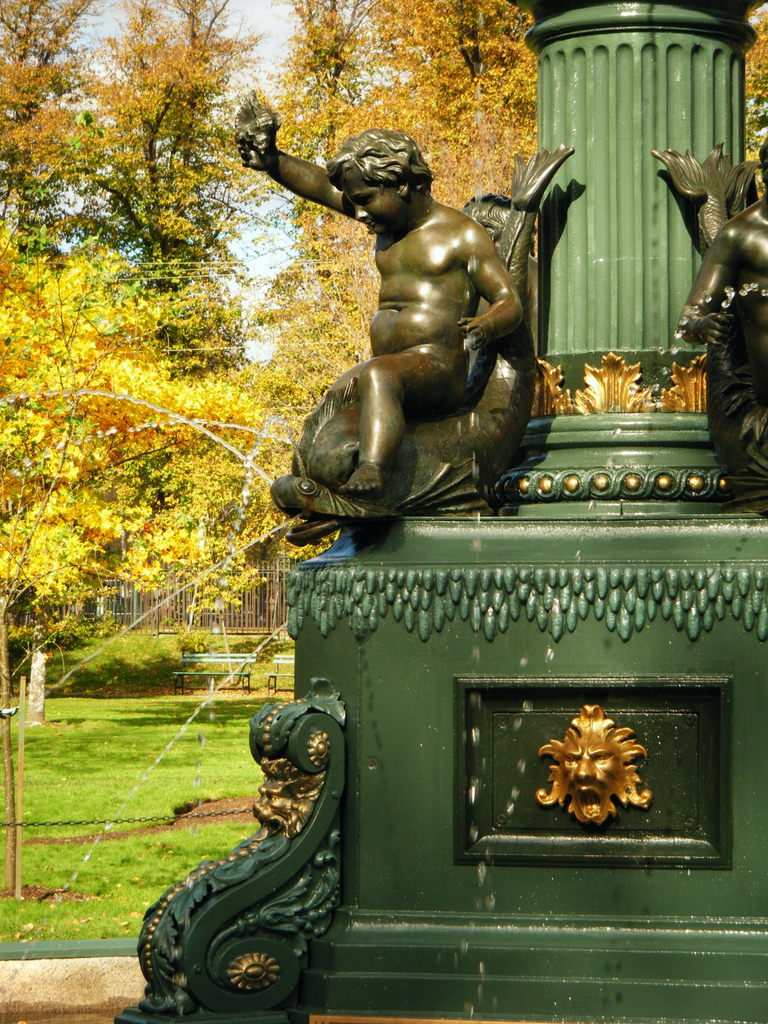 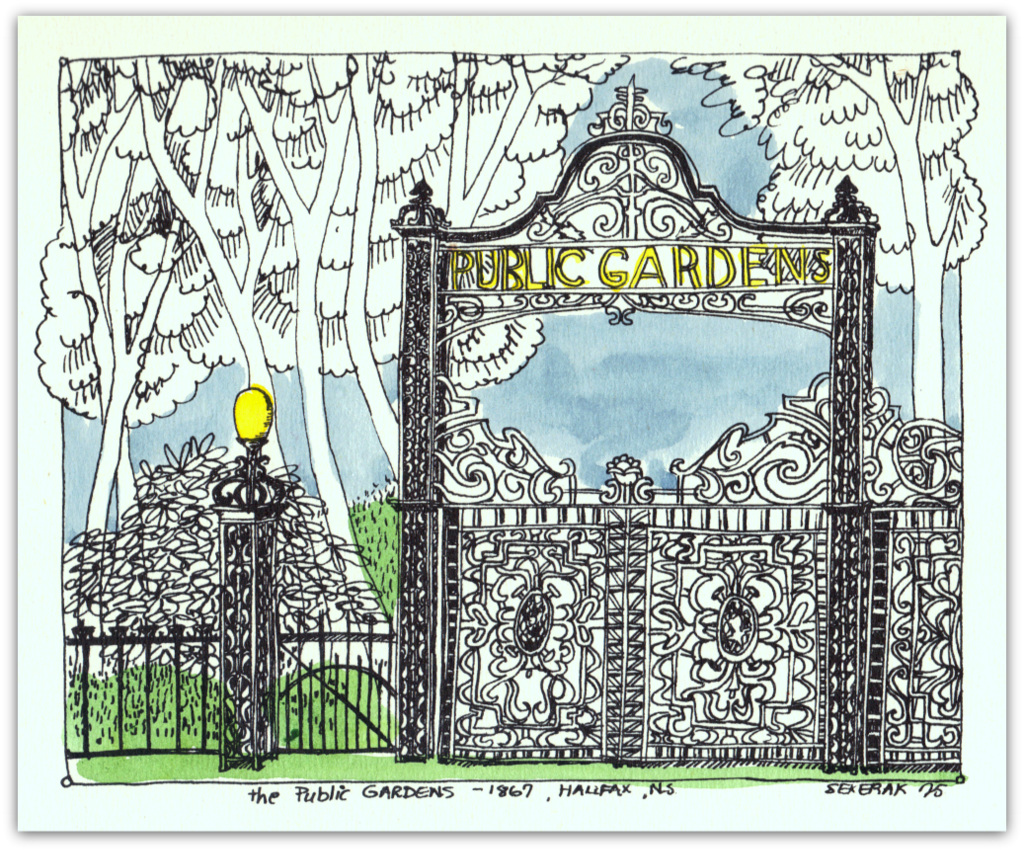