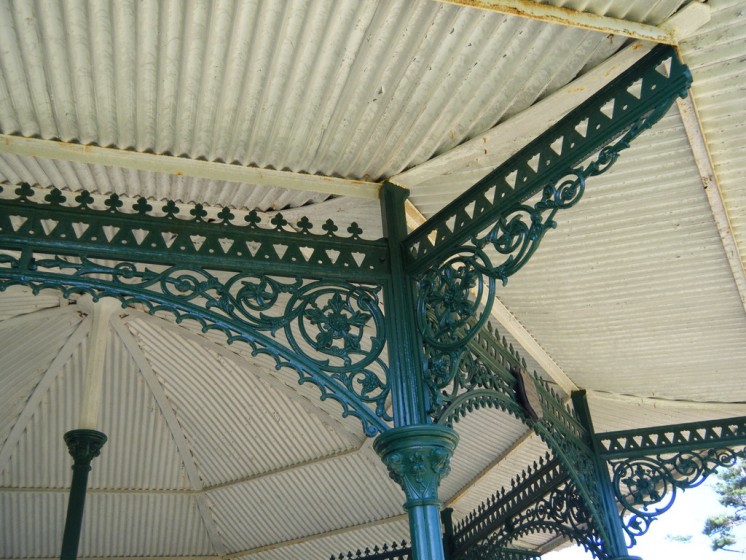 As you may have noticed, I’m a fan of the decorative cast iron that was popular from about 1860 until the First World War. There is not a lot in Nova Scotia but we are lucky to have small treasures from local foundries and some larger pieces made at the most significant American and British ironworks of the time.

Some of our most beloved iron in Halifax was made in the vast Walter Macfarlane Foundry in Glasgow, Scotland.  They hired good designers for their products, printed well-illustrated catalogs and shipped all over the world.

Two identical summer houses for Point Pleasant Park were purchased  from Macfarlane in 1881. The one at the tip of the park is obvious but I suspect many people miss the pavilion that  now overlooks the container port, which is of course all land fill. When it was new the harbour edge was just at the bottom of the hill as was the main entrance to the park. This one still has its ornate finial. Generally it is remarkable how well both have survived  for over 130 years of exposure! Here is what the summer house at the point looked like when it was new. A decorative band around the eves adds substance to the roof and there is a solid balustrade, I don’t really understand, with a painted or stencilled design. The roofs are the original corrugated iron, that I find really beautiful. The summer houses were purchased with a bequest left by merchant William West. Astonishing engraved brass plaques are attached to each structure. In the early 70s I searched for maker’s marks and discovered the Macfarlane origin. There are three other Macfarlane products in town that I’ll introduce over the next week or so. Just like Serial don’t you think?

We visited Glasgow last month and watched for Macfarlane products.The biggest example we saw was the glasshouse in the Botanic Gardens. Known as the Kibble Palace it is about ten years older than our summer houses.  The cast iron columns and brackets felt familiar.