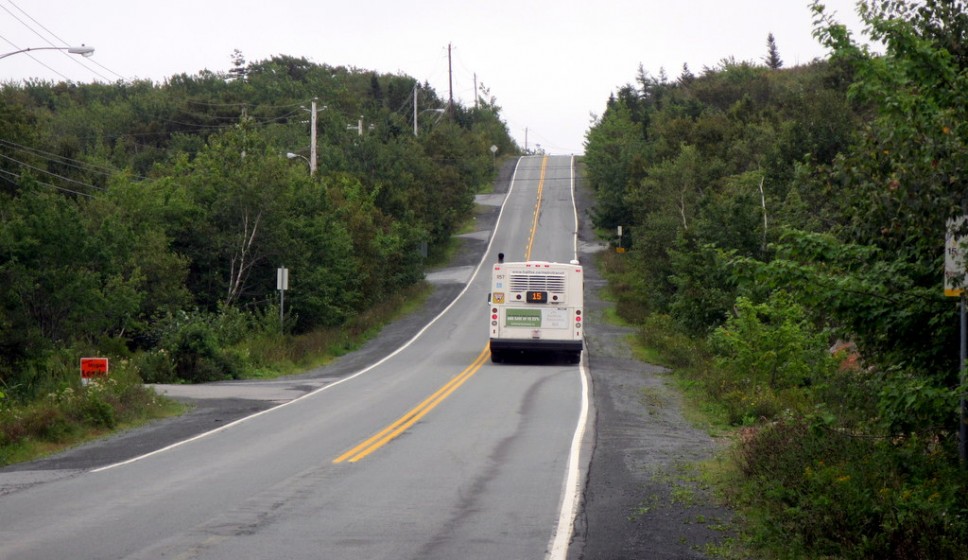 Halifax Transit wants to eliminate our bus.  No bus, not less bus.  NO BUS.  If you’re interested, I can tell you what this feels like.

The route in question is part of the #15 from Williams Lake Rd, through Boulderwood, Purcell’s Cove, Ferguson’s Cove, ending at York Redoubt National Historic Site.  My stop is just a weathered sign on the shoulder of the road. This time of year there are many flowers blooming in the ditch next to the stop. Here is a joyful sample I snapped while waiting for the bus last week. When it is raining, as it was when I waited earlier in the week, the experience is less pleasant. Commuters in cars race by because this is the only straight stretch before the Rotary. Imagine what it feels like standing in the freezing rain of winter. When we moved to our community, over 20 years ago, bus service was one of the benefits that added to the charms of the area.  We once owned two cars but, with the bus as backup, that is no longer necessary.

Our coves are not the distant suburbs. We look across the Arm and harbour to Halifax and Dartmouth, and even I can remember when there was a tiny passenger ferry from Purcell’s Cove to the tip of Point Pleasant Park. The proposed new route for the bus would go through some developer’s subdivision, blasted out of backlands,  that was built without the  prospect of bus service and folks moved there knowing there was no bus.  We thought about transit when we moved  here but now it feels like we are being punished.

There is probably no prettier bus ride than the #15.  About 20 minutes to the Mumford Terminal gives some time for peaceful reading or just gazing out the window without intent. The #15  is used by folks coming from the city to swim in lakes and hikers to reach the Nature Trust conservation lands or families to romp at York Redoubt. Spryfield is the natural shopping and service area for our coves but we can’t get there by bus. So the Mumford Bus Terminal and Halifax Shopping Centre are our hub.  I can’t say enough bad things about the soul-sucking dreariness of the Mumford Terminal. Halifax Transit says they will build a new terminal next decade.  The present setup is owned and maintained by the Ontario Teachers Pension Fund  (Halifax Shopping Centre).  We live in a northern land yet there is limited weather protection, limited seating, nothing to help strangers, nothing to encourage joy.

Because the #15 runs once an hour I have often had to wait and think about the shortcomings of Mumford. No one with any authority appears to care about the 1000s of people who use the terminal daily.

Like buddy in the photograph, I sat on the curb last week, among the cigarette butts, with my bag of CSA vegetables. That was my best option. Recently there was a well-attended community meeting about the bus issue.  Our politicians promised support, strategies were presented, it was good to see neighbours. I guess low ridership is the issue for Halifax Transit. I would frame it more as a failure to provide services that would encourage more ridership. Whatever. I’m going to try and use the bus more and celebrate little pleasures when I find them. Noticed this great bit of leaded glass while waiting for the #6 last week. Do  youngsters get the “you’re either on the bus or off the bus” reference?   #CulturalLiteracy