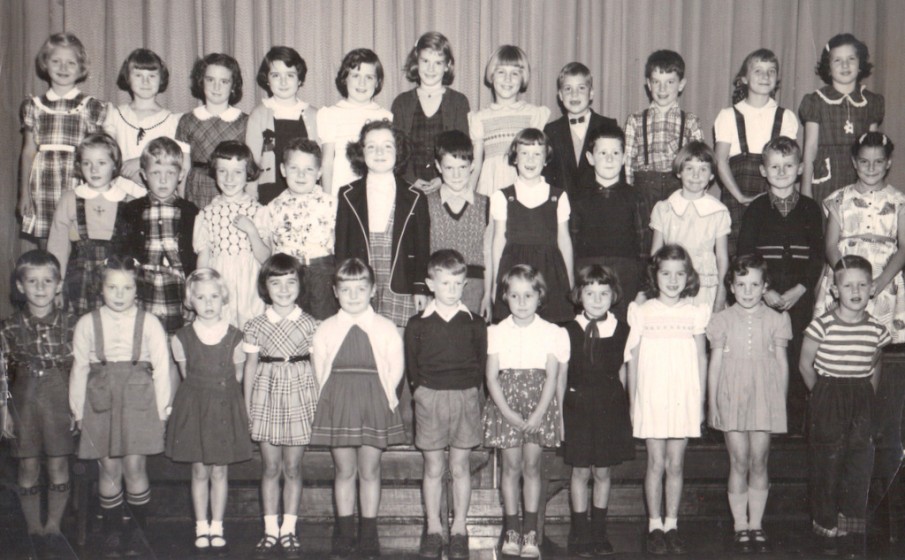 Did you notice that LeMarchant Saint Thomas elementary school in central Halifax is going to be demolished and a new school built in its place? If you squint, the old school has an imposing facade facing Watt Street but I’m sure the inside is very tired. The Rhododendron Society I belong to has held plant sales in the gym and a couple of years ago I snapped photos of the 1960s surfaces: Douglas fir plywood, concrete block and asphalt(?) tile. Those were the days.

The school about to be razed was originally Saint Thomas Aquinas School for Catholic students. Protestants, like me, went to LeMarchant Street School across the street (now the Halifax campus of Université Sainte-Anne). Maybe with the new school they will get a clever new name, like South Central.

The main section of LeMarchant was built in 1951 and I started Primary there in the fall of 1952. Here is that class standing on the new front steps dressed up for some type of performance. I’m the toothless, demented looking child just right of center in the back row. Not hard to believe these sweet five year olds would turn into the always young and fun baby boomers of today. My mother saved the program from the Primary Chrismas “concert.” Started with O Canada and ended with The Queen as all programs did in those days. Then we sang and danced; there were pantomime and mimetic (?), rhythm band and finger play.  Songs included Who is Coming on Christmas Night? and I Love Little Pussy.

Here is what we were looking like by grade 3.  I wore hand-me-down clothing from a European family which must account for my unusual costume (I’m the one in shorts and the swell patterned sweater vest). This might be a time to mention that I don’t recall any bullies or bullying. It must have happened, but not to me.

The whole school was involved in this Physical Education Demonstration. More mimetics. The school went to grade 6.  I’m the second from the left in the top row , not standing out.  You notice that there are no visible minorities in my class pictures. There were a smattering of kids from Greece who would come and go. They might not have been too talkative because they didn’t speak English. There were a couple of Jewish kids who were distinguished because they got a holiday we didn’t in September. For the most part we look pretty thin. I think we all went home for lunch because there was a mother there. Mine was easily distracted so I often was greeted by the smell of potatoes that had boiled dry.

The large school playground was paved and had a slide. We played chasing games and created wonderful icy slides in the winter.  We lined up in straight, quiet lines to go back into school.

While the new school is being built at least some of the students will have classes in the old LeMarchant School buildings.  I hope that 60 years on their memories of the experience are as neutral as mine. We were taught to fold our hands like those kids – does that still happen?