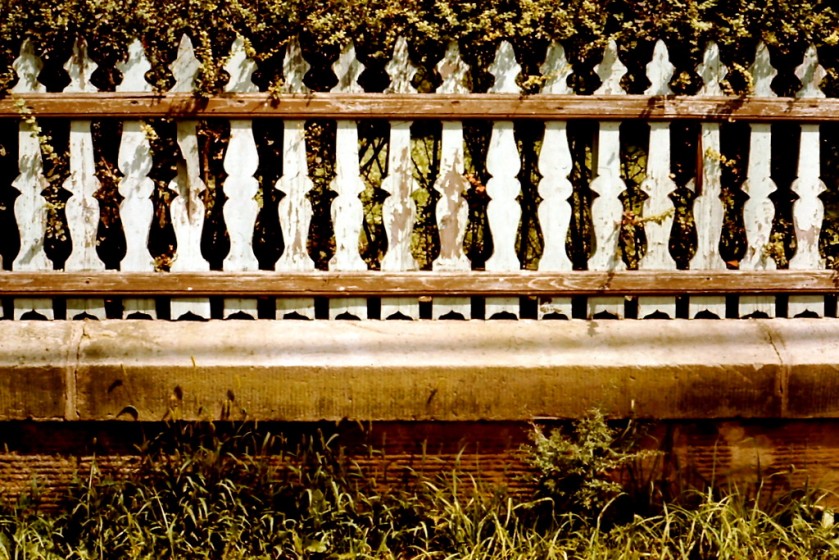 I grew up on one of the nut streets (Walnut) in Halifax. The view from my bedroom in the mid 1960s shows the ubiquitous wooden picket fences, the only style of fence I knew. In the early 70s I worked on the restoration of Sherbrooke Village and realized that in the 19th century, fences were much more common and came in many designs. Vintage photographs showed the richness of our lost fence heritage but I also began to notice and photograph a few old fences as I traveled in the province.

This striking example in Hantsport was in front of a large Victorian house. The fence style was right for the 1880s, and it might have been kept in good repair and pieces replaced since that time. It is no longer there and I suspect none of the wooden fences I photographed have made it out of the last century. The interplay of positive and negative space is mesmerizing on this example from Freeport on Long Island.  You can see that it is a bit soft and needed to be propped up. To demonstrate the value of old photographs, take a look at the Public Archives photo of a house at the corner of Gottingen and Cunard. The front yard is lined with a popular 19th century wooden fence design. Notice some bits are missing. The service areas and back garden of the house are protected by high solid fences. I saw a fence, similar to the Gottingen Street example,  collapsing  in Maitland in 1976 . In 1974 this high paneled fence still survived on Brunswick St about a block away from where the historic photograph was taken. Not all the fences I noticed were fancy. Often old photos showed picket fences with molding on the “front” side of the fence hiding the top  rail. This example from Truro shows what I mean. A modest fence in Westport on Brier Island. Sometimes builders were just having fun. In the 19th century it was very common to have fences around family plots in cemeteries. Maintenance issues and demands of lawnmowers have eliminated most examples.  In a Maitland cemetery in 1974 this lacy wooden fence was receiving excellent care. I was enchanted to rediscover this image of a fence in Caledonia, Guysborough County.  It was so different from the picket fences that surrounded my backyard and epitomised the earlier fence tradition. Elegantly constructed: notice the wide rails mortised into the posts; elegantly designed: notice the “strength” of the rails contrasting with the lightness of pickets. Mortising the rails means that the post can become an important element, extending above the pickets and with its simple cap.