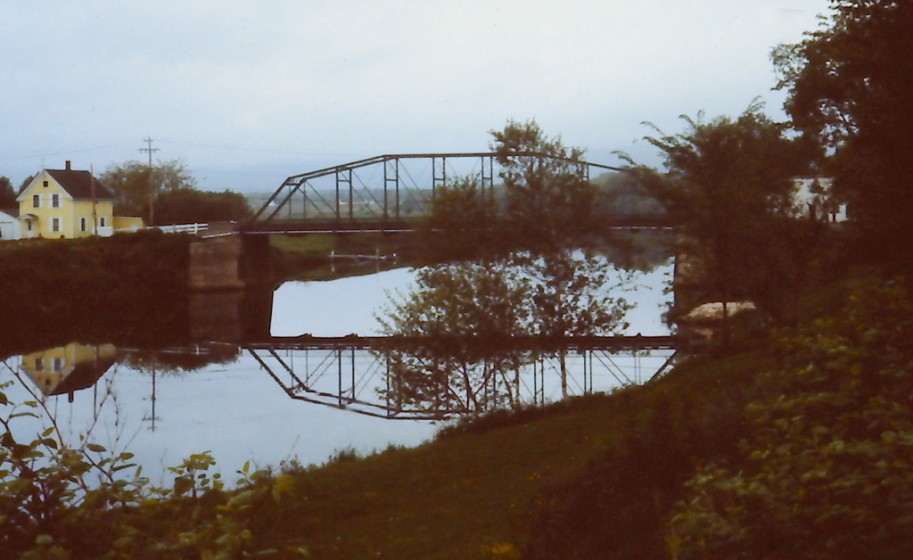 It was sad to read the stories about Bridgetown’s final moments as an actual town (here is background by John DeMont). I have some history with Bridgetown and this got me looking at old photographs and recalling memories of the town.

My parents grew up in Bridgetown (sort of childhood sweethearts). Their parents had moved there to work in the early 1900s . Both of my grandfathers died in the 1930s and all their children left  for careers elsewhere (which is not really how you keep a town going).

Melbourne Armstrong, my grandfather, enjoyed gardening and was particularly fond of sweetpeas . Here he has decorated his car with sweetpeas and gladiolas for the Labour Day Parade in 1919.  I remember what a big deal Labour Day parades were in the 50s , when there was still industry and labour in the town. Melbourne died suddenly during the Great Depression and my grandmother bought a smaller house and took in boarders.  She died in 1949 and the house gradually became our summer cottage, even though it was virtually in the centre of town.

On the day that school closed in Halifax, my mother and the kids moved to Bridgetown for the summer. This is what our cottage on Church Street looked like in 1955. Our Rover is in the driveway – English cars were inexpensive after the War. There was a tall elm in front of the house that died of Dutch Elm disease in the 80s. The loss of the elms really changed the character of the town and made it feel exposed. One of the first summer activities was ordering a load of slab wood from Hicks’ Mill (the kitchen wood stove also heated the hot water).  When the wood arrived we children could use it to make a “fort” but after a week or so that had to be dismantled and we split the slabs and piled them in the shed. Children + axes works better than you would imagine. I’m to the right in this 1953 photo, waving my wooden sword. Hicks’ sawmill was a big  operation with a steam whistle that announced the beginning of work, noon, and the end of work.  The mill was visible from our backyard. The buildings to the left were part of the mill complex ( this photo is after the mill closed). In the early 50s there was a textile mill to the far right.  Many women would pass our house everyday on their way to stitch something. When it closed the buildings were turned into a bowling alley for a while. Also in our view were the massive brick buildings of Acadian Distilleries, just visible above the pear orchard.  Their soft ball team was called the Rum Bums. These industries were served by the Halifax and South Western Railway  that crossed over from the south shore at Middleton. Only one or two freight trains a week came to Bridgetown, which was the end of the line. We would walk along the rails on our way to pick blueberries. The other rail line was the Dominion Atlantic (imagine TWO rail lines).  It carried passengers and freight  from Halifax to Yarmouth.  This is the station not long before the line closed. The building lives on as the End of the Line Pub.

As children we would go to the station to experience the power and wonder of the steam locomotives. The engineers of freight trains would often invite us into the cab as they shunted freight cars along the warehouses that lined the siding. When passenger trains were replaced by the Dayliner it didn’t feel the same. The heavy truss,  rail bridge still survives, I believe. Those are reflections of cattle standing on the dyke. Bridgetown was the last place that the Annapolis River could easily be bridged and was the head of navigation when the river was still allowed to be tidal. The road bridge I grew up with was a light, steel, truss. Painted green, it virtually disappeared into the landscape. The present bridge is a characterless concrete design.

Until the 60s Bridgetown was the commercial hub for the surrounding  countryside. Every Saturday night the streets would be lined with vehicles and the sidewalks crowded with folks coming to shop for the week. I remember three grocery stores, a couple of hardware stores, women’s clothing stores, a shoe store, jeweler, drugstores, menswear, two barber shops and two banks. Here are examples: I was particularly fond of the three downtown service stations, each a wonderful example of classic design. Of course none of these operate as service stations today. When the Irving was removed it left a big vacant lot next to the Town Hall (once the Post Office). A doctor recently explained to me that there are two things that kill most older people. Either they die of a catastrophic disease like cancer or succumb to  progressive dwindling. I realize that what I was witnessing from the 50s on was Bridgetown caught up in a process of progressive dwindling that has just now killed it as a town.

When we closed up our house after the Labour Day Parade and returned to Halifax we were a little part of this dwindling process. We paid our taxes but we were not around to be a part of the community.  We were as bad as the folks that chose to drive to the new mall in Greenwood instead of supporting their local merchants. Bridgetown in the 1950s provided a glimpse at an earlier time that now feels very remote.  Here is an example of continuity that amuses me.

From the early 1900s to the early 60s,  Georgie Cunningham was the town’s professional photographer.  Photography was one of the new professions that women could enter. Her studio was on the second floor of a building on the main street and it had a large north facing window to provide light for portraits (just like an artist’s studio).

On the left is a portrait of my mother in 1923.  On her way to have her picture taken she  apparently found the kitten in the street and took it into Georgie’s studio.  Georgie also took a number of portraits of my brothers and I.  She used a big view camera that could take 8 by 10 negatives. I remember she  would disappear under the blackout cloth behind the camera to adjust the focus. I’m in the centre of the photo from about 1948.  Because we were constantly fidgeting, Georgie cut and spliced together two negatives to make one good image.