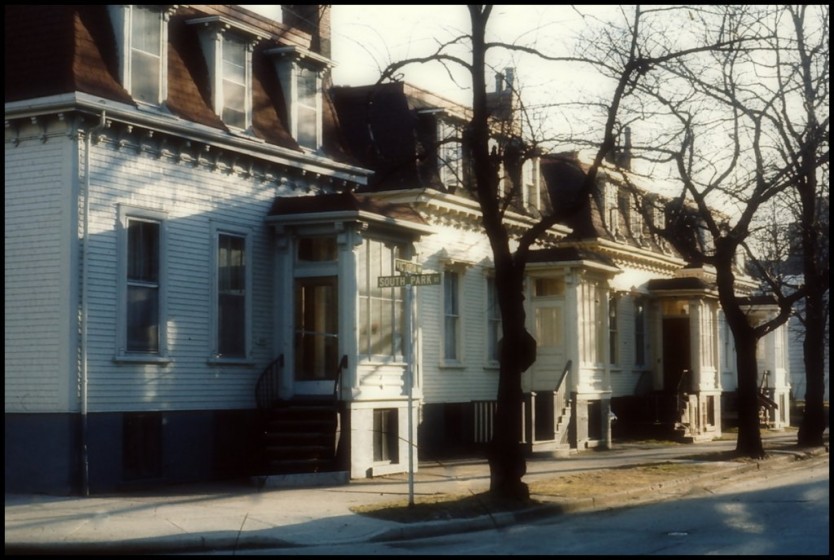 Remember the thrill last winter when stormchips were invented? A heady couple of days. Since then “storm” has lost some of its glitter (stormrum, stormcharcuterie, stormkale) but it is still a useful concept and feels like a Maritime phenomenon (here is a useful oral history of the creation legend).

This got me thinking about a Halifax architectural feature that has lost some recognition over the years, the storm porch or as we say today #stormporch. Thirty years ago there was an exhibition at the Mount Saint Vincent Art Gallery of photographs by Renate Deppe of Halifax storm porches. Suddenly  visual and heritage folks were cued to start noticing these little features that were hiding in plain sight. If you haven’t been noticing them, they make an appealing addition to your looking around repertoire. An enduring record of the exhibition was a poster. Mary Sparling, the director of the Mount Gallery (and grandmother of Allison, one of the Queens of Twitter), liked to get the most out of a piece of paper so on the back of the poster is a short essay by Maud Rosinski, an important voice for heritage in the early days. If you know the the old South End and the old North End you have passed scores of these side-entrance porches. They are wonderfully functional in our climate creating an airlock where you stamp the snow off your boots before entering the hall. An unheated public space where you can talk to the Heart and Stroke canvasser without having to invite them into your private sanctuary. Often with large windows they are bright projections that give you a vantage point to look up and down the street. The classic period for the porch was probably 1860 – 1890.  The most charming examples have Italianate detailing with brackets and decorative moldings. If you want to experience a storm porch drop by the Henry House for a brew.  Many of our town houses had elevated first floors because the kitchen and service rooms were in the basement (you can still see the cooking hearth downstairs in the pub). With urban houses built right to the sidewalk,  a side entrance to the porch was the only way to get access.  On the left is a photo from about 1980  compared with how the porch and railing have been improved today. Sometimes a porch was added to an earlier building.  The porch and dormer on this former Tobin St house were probably decades newer than the rest of the house. Some more examples to get you in the mood to go observing. Some of the most flamboyant porches are on the big houses of Tower Road.  It’s worth a stroll some afternoon when the houses on the east side of the street are lit by afternoon sun (on the poster the top left three are on Tower).

Of course storm porches are found in other places in the province and in the continent, but in Halifax they are a wonderful addition to our traditional form of house and they are a defining characteristic of several of our older districts. When you visit Savannah or Charleston their tourist literature draws your attention to regional architectural features. The Halifax storm porch would be a great way for visitors to start understanding our architectural heritage.