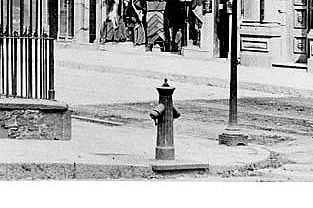 Twitter has been having fun since it was reported that Halifax Water would not release a map of hydrants in the city, citing security concerns. Tim Bousquet was posting Google Street View photos of hydrants in front of public buildings. Andrew Bourke created a map that allowed you to mark the hydrants in your area. This reminded me that I had noticed a couple of hydrant locations that had not changed for at least the last 140 years.

I’m a fan of decorative cast iron and a couple of years ago I was preparing for a cast iron walk as part of Jane’s Walks. When I compared an 1869 Archives photo of the iron fence in front of St Matthews on Barrington with the present view, I noticed that a hydrant (and a lamp post)  had remained in  the same positions. The design of the hydrant has probably changed several times while the location remained the same.  (The Archives photo is wonderful, I encourage you to look at the high res copy on their site. Notice the high wall in front of Government House.) I wondered if  it was common for hydrants to stay in the same location so I did a very quick look at the best single source of early photos of downtown Halifax,  Rogers’ Photographic Advertising Album. This is a group of street view photos taken in 1871. The Heritage Trust  published a facsimile of the album in 1970 and I have spent hours over the years exploring the images. Now you can do the same  on the Archives site.

A number of the views show hydrants but the only one that matched a present day location was at the corner of Hollis and Prince beside the Legislature fence. I don’t know much about hydrants or the city water system but it is perhaps not surprising that locations would remain the same over time.  It is appropriate to acknowledge these little pieces of our infrastructure that we ignore until our house catches fire.

With historic photographs it is possible to document various hydrant designs used in Halifax.  One earlier style has been preserved in the city’s under-celebrated museum of the street on the Granville Mall.  Sweet. Not so sweet is when the Split Crow does not clean around their site early EVERY morning. This is what it was looking like a couple of years ago.  (They were doing better last time I looked but remember: EVERY morning , EARLY).