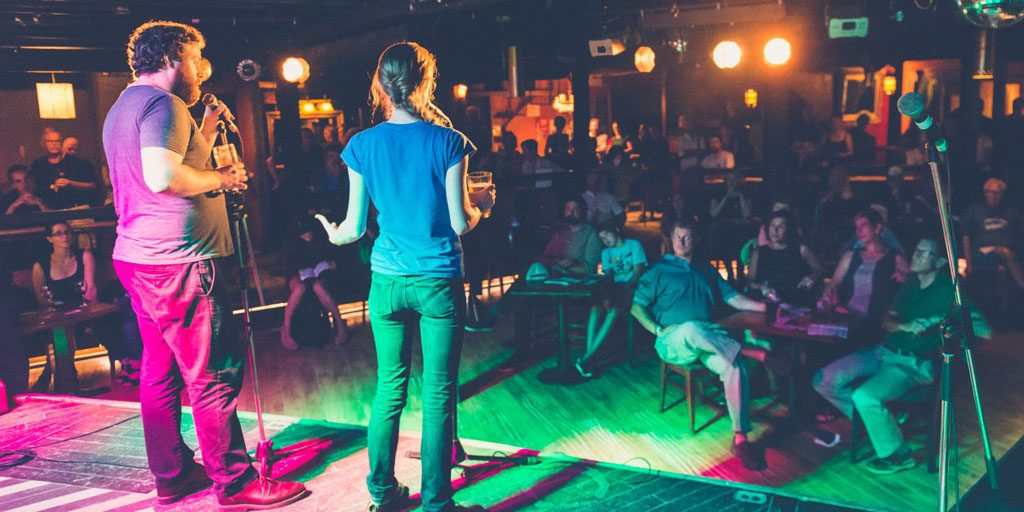 Something Wrong: Performer Andrew Gaunce puts his extensive fascination with horror and the supernatural to good use in his captivating one-man show. Despite a weird directorial choice in the show’s final act, it’s a Fringe show chock-full of insanely creepy anecdotes and laced with Gaunce’s charming humour. Something Wrong will keep you glued to the edge of your seat. ★★★1/2

Sex, Drugs, and Jazz Hands: Winnipeg-native Krystle Meixner brings her banjo and one-woman show to Plan B theatre. Meixner is quirky and charming, and her natural humour often outshines her scripted jokes. Detailing her experiences in navigating the world of online dating and recreational drug use and how she’s come to extract her own identity out of it, Meixner’s show is entertaining, yes, but still needs further practice and polishing. ★★★

She Wolf: Returning Fringe titan Gillian English takes the stage as Margaret of Anjou, a real-life two-time Queen of England, whose entire memory has been tarnished by time…thanks mainly to four plays written by William Shakespeare. Funny, biting, and absolutely, absolutely on the money, English examines the misogyny of the 1400s and how absolutely nothing since then has changed. ★★★★★

Oh Crap, My Scarf: Featuring a high-paced, eccentric script and a magnificent performance by its star Leslie Smith, Oh, Crap, My Scarf is a Fringe caper you won’t see anywhere else. I would’ve, however, liked more of a satisfactory ending. ★★★1/2

25: Performers Anastasia Wells and Elliot Delage shine in 25— a dark and cryptic Fringe affair. Delage and Wells are equally talented, and watching them switch seamlessly between twelve different roles is a thing of enviable beauty. Sleek, intelligent, but a teensy bit confusing towards the end, 25 is a show worth checking out. ★★★★

The Easy Lovin’ Blues: Beautifully staged and armed with a powerful script, this Montreal-based production will entice you with its world of addiction and destruction. The acting, though confident, feels uneven — there’s a more than a trace of inexperience in the air, which doesn’t always fulfill the requirements that this play demands. ★★★

Ah Hell! The Words of Dorothy Parker: Actors Christine Daniels, Schoel Strang, and Heather Beresford take the stage with a tribute to a literary heroine. Scathing, sassy, yet simultaneously vulnerable, Ah Hell pays homage to a writer who wasn’t afraid to stand out against the norms of her time. ★★★1/2

Brunch! The Musical: Be sure to take advantage of a rare Fringe event: a musical! Take a break from some of the darker and dramatic shows and check out this fun, light-hearted one. Featuring a live band and catchy numbers, this play is a whole brunch of fun. (Sorry, not sorry.) ★★★1/2

In SpAAAAAce!: Halifax theatre company Terra Novella takes to space in its epically-hilarious parody of the Star Trek franchise. Featuring some of Fringe’s best comedic performances, karate, and a kickass title sequence, In SpAAAAce! is sure to set your phasers to stunned. ★★★★

A Man Walks Into A Bar: A powerhouse performance by Michelle Langille propels this Fringe show into my apparently elusive 4-Star territory. Bolstered by a strong performance by a still on-book Jake Willett (disappointing), this two-hander play by Rachel Blair begins entertainingly enough before gradually slipping into powerfully-relevant topics about misogyny and respect. While there may not be a punchline, this play still packs one heck of a wallop. ★★★★

Gina Is Dead: Tea Time Creation Co. comes bearing bad news – local actor Gina Thornhill has died. With three umbrella-wielding ghosts leading the way, audience members embark on a forty-five minute walk around Halifax’s north end with periodic stops for the ghostly hosts’ encounters and musings about the act of dying. While this theatrical outing has its cute and intriguing ideas, nothing really feels satisfying. There’s a heart beating under this show’s bones, but right now and in this stage, I’m not sure what the message is. ★★1/2

The Ghost Project: Karie Richards conducted interviews with twelve different individuals who’ve experienced some sort of ghostly encounter in their lives. The final product is The Ghost Project, in which Richards loses herself in a dozen distinct and memorable roles. Unlike other Fringe hits dealing with the supernatural, this work is less about scares and more about rumination. Richards is captivatingly versatile in her reflections, making her a strong contender for Fringe’s Best Performer award. The Ghost Project goes deep into the subject of mortality and the existence of an ethereal afterlife. It’s not about cheap scares- it’s about understanding the unknown and not having to do so alone. ★★★1/2

The Extinction of Hong Kongers: Theatre du Poulet brings native Hong Kongers Chun Shing Roland Au and Santayana Li to the stage. Armed with a cardboard city, potato puppets, and an abundance of emotion, The Extinction of Hong Kongers details the history of a suppressed city and a people who’re slowly losing their identity. Haunting and captivating, Au and Li’s first hand-accounts will educate about an important issue that, to this day, still seeks resolution. It’ll make you think twice about how good you have it today. ★★★★★

Agatha Apple: Grace Booth has planted the seeds for an entertaining theatre experience with a very abstract tale about an ailing Mother Earth. In a play with two major parts, Booth steeps her work in metaphors, making the true message of her piece tricky to decode. Featuring a few compelling plot ideas and an important message regarding Earth’s sorry state, Agatha Apple still has some work to do before it’s fully bloomed. ★★★

The 28th annual Halifax Fringe Festival runs from August 30th to September 9th, with more shows (55) and performers (350) than any one person can hope to see. Check out their full schedule here.