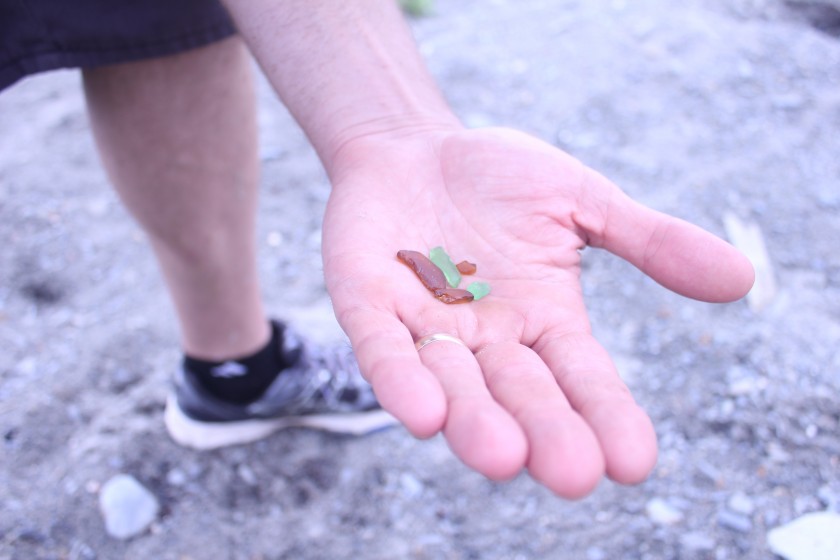 This story was originally posted August 2nd, but now that our video (see below) is finished, we wanted to re-share it!

Our Tancook Island adventure started with a sea cruise, a $5.50 passage across the water from Chester to Little (then Big) Tancook. The trip was an adventure in itself – small islands, birds, and breeze from the top deck. 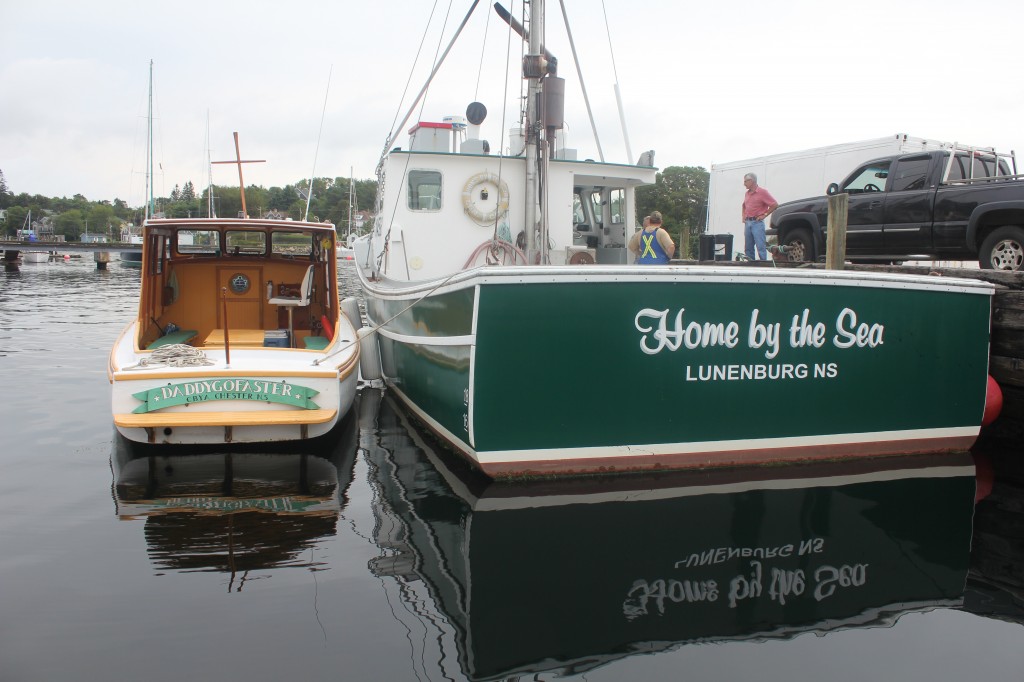 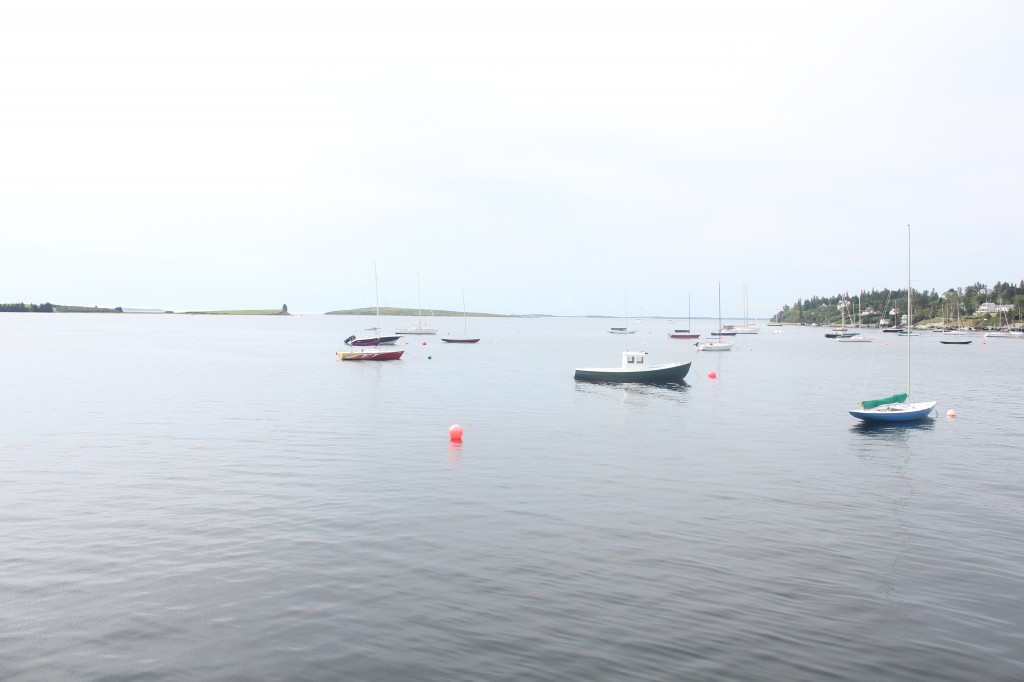 We disembarked 50 minutes later and were handed a map with points of interest as we exited. It didn’t take long to fall in love with Tancook. Even in the morning fog, the island greets you in style. Pops of pink, purple, yellow, and red dotted the dock, mixed with the rich blue waters.

We’re on Big Tancook to create a video (above) of one of the first offerings from Experience Nova Scotia, a new company keen to connect locals and visitors with one-of-a-kind, authentic NS experiences. The Tancook adventure includes a bike rental, so we turn the corner up the hill to meet Patrick. 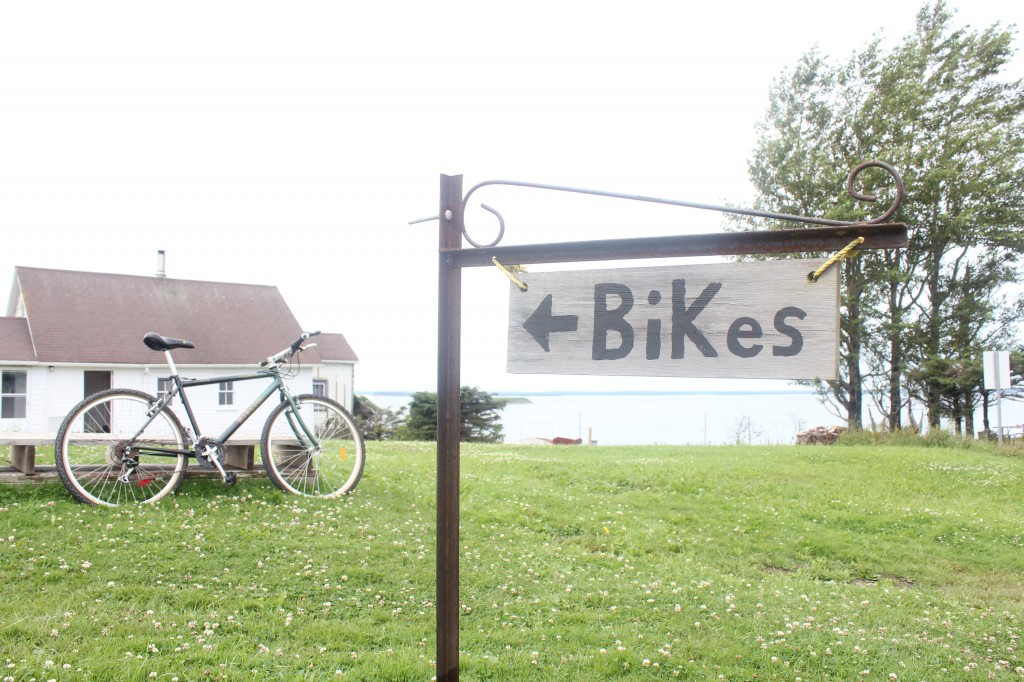 Patrick has been renting bikes on Big Tancook for three years. He started with just a few cycles and slowly built his fleet as rentals grew. It’s $10 to rent for the day. 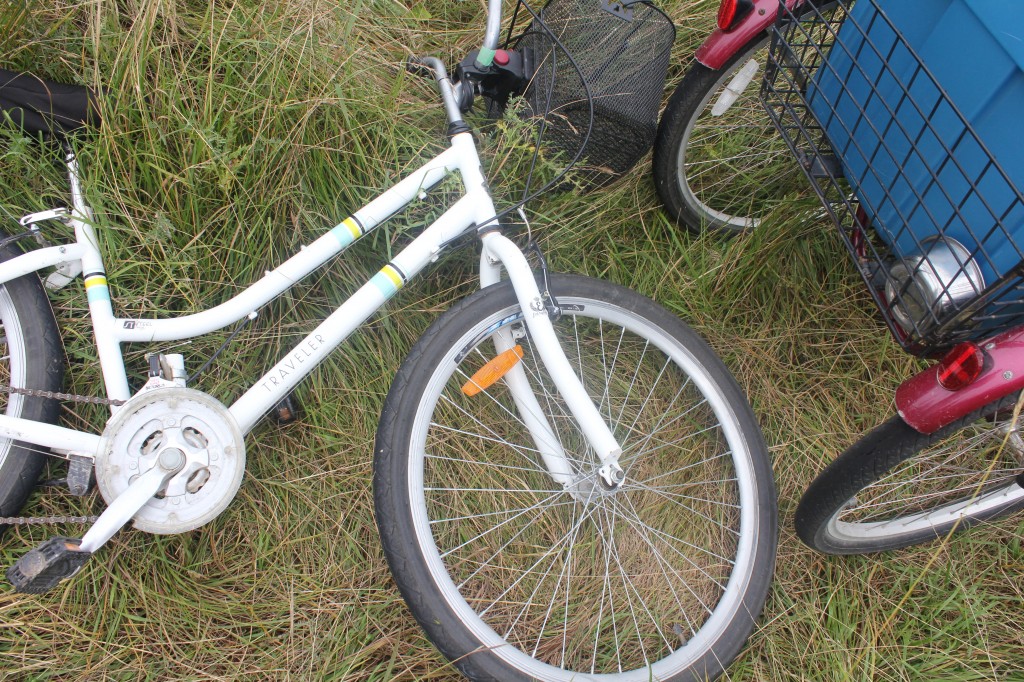 Patrick helps us pick our bikes – a white bike appropriately decaled with the word “Traveler” on one side for me, and a large red tricycle for Drew. The idea is to get Charlie to ride in the basket at the back of the tricycle while we toured the island, but he had other ideas, preferring to run alongside us as we pedaled.

We headed as far as we could go in one direction, a little less than a 1.5km. A friendly local pointed us through his property to a rocky beach where we could see the Devil’s Footprints, a set of prints that enter the island on Big Tancook and exit on Little Tancook. After nearly losing Charlie to the temptation of chasing the white-tailed deer and fish smells, we headed back in the opposite direction. 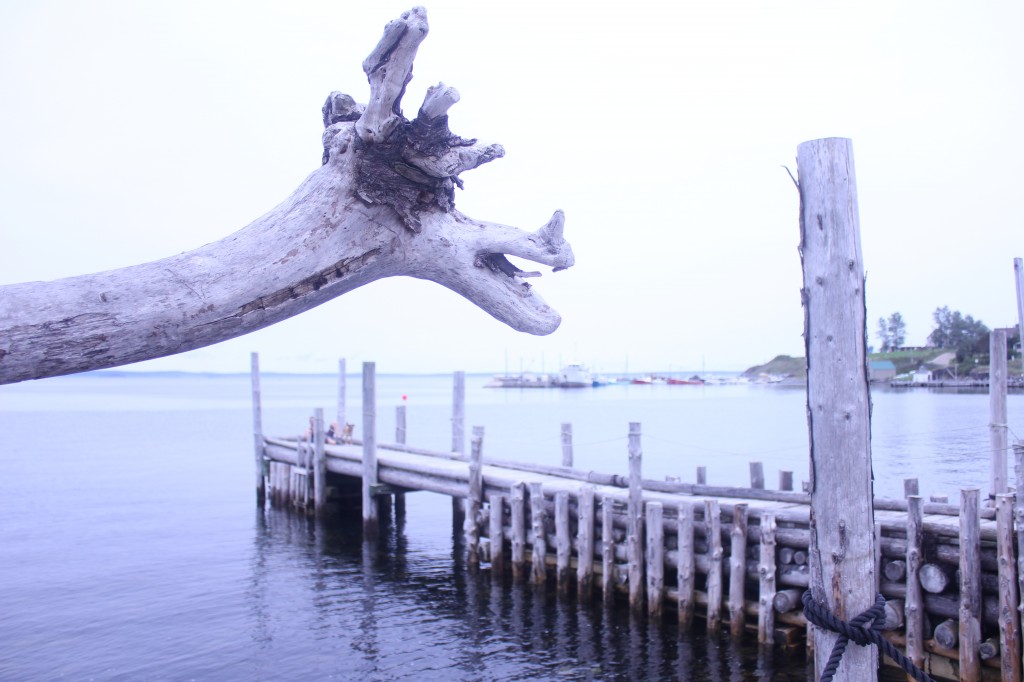 There’s an artist shop called Sea Myst where we met Ruby the pot-bellied pig and browsed the lovely collection of local and international art curated by Angela. 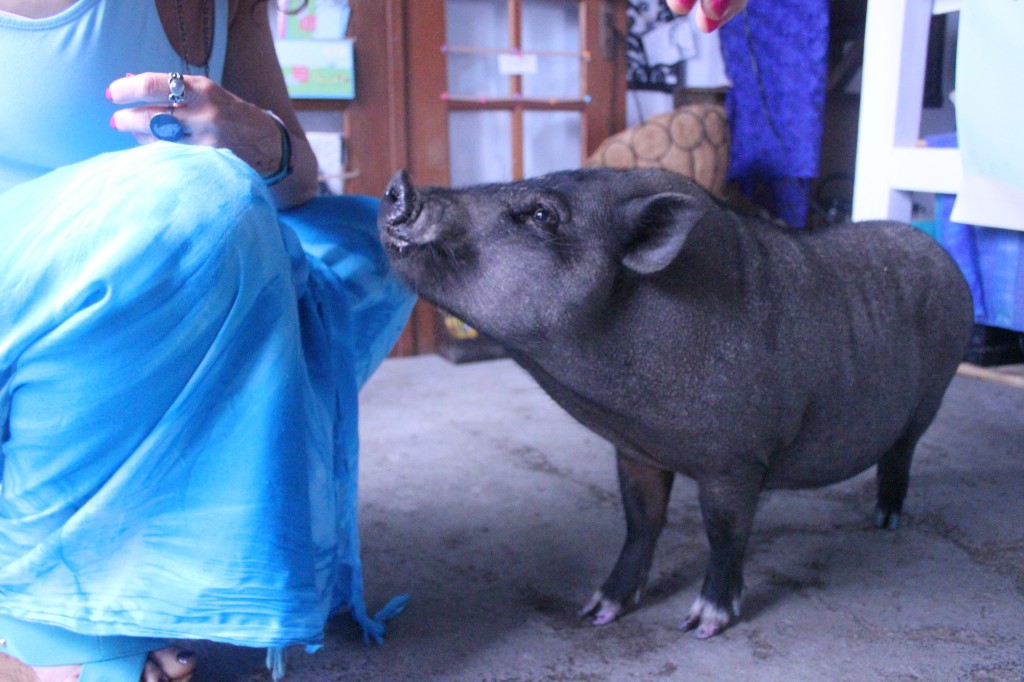 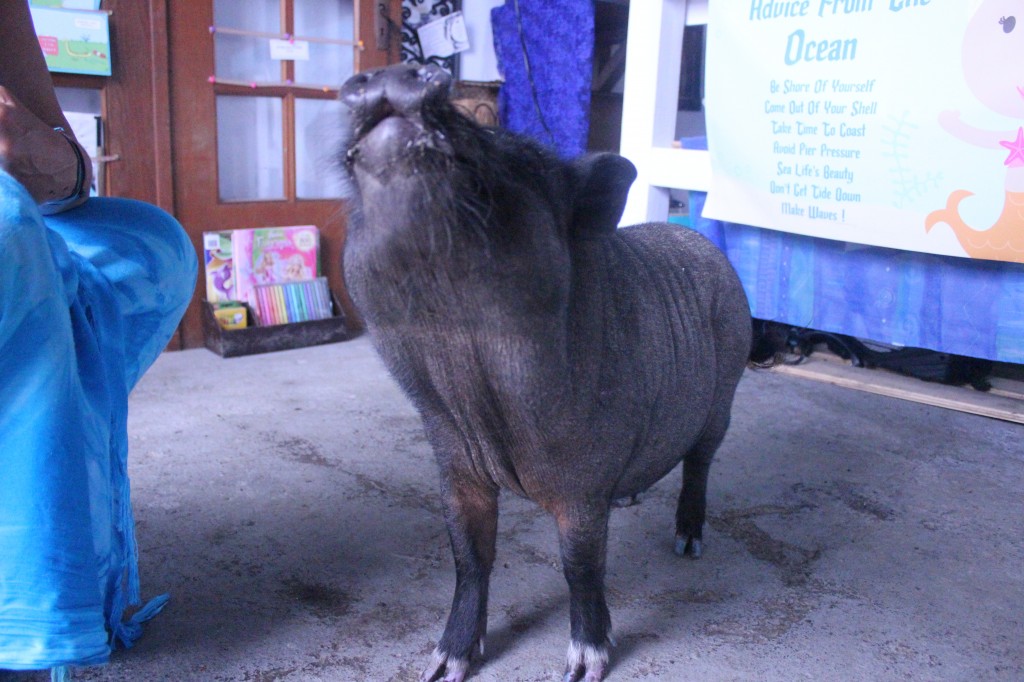 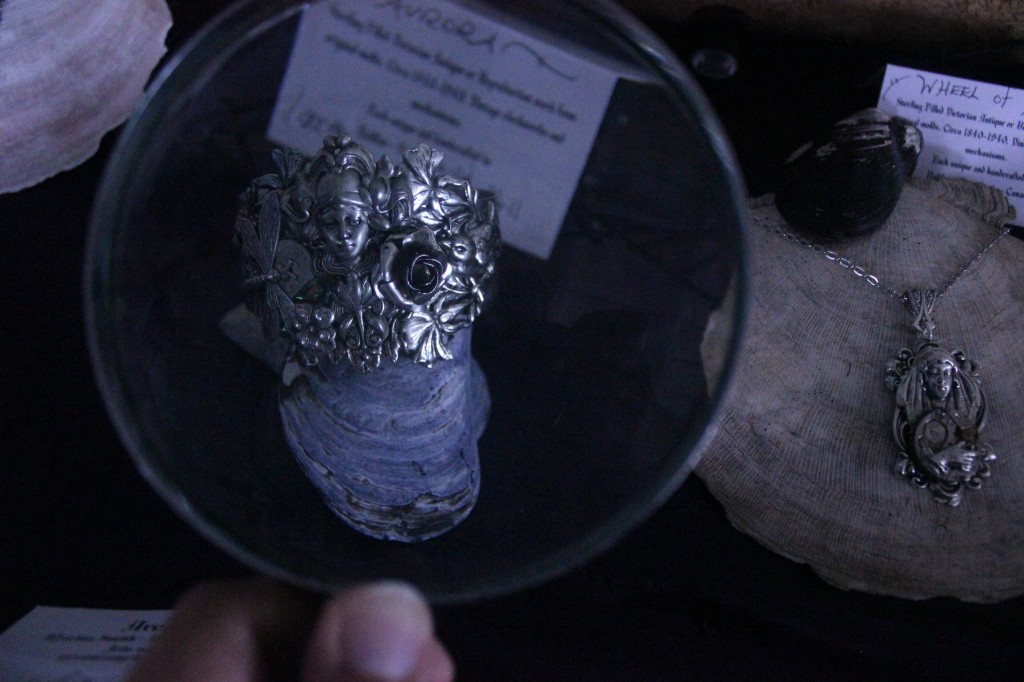 From there we continued to our main destination, Wishing Stones Studio and Gallery. It’s about 2km down the windy dirt road that circles that end of Tancook. We followed the signs for the beach, then parked our bikes to meet Hillary. 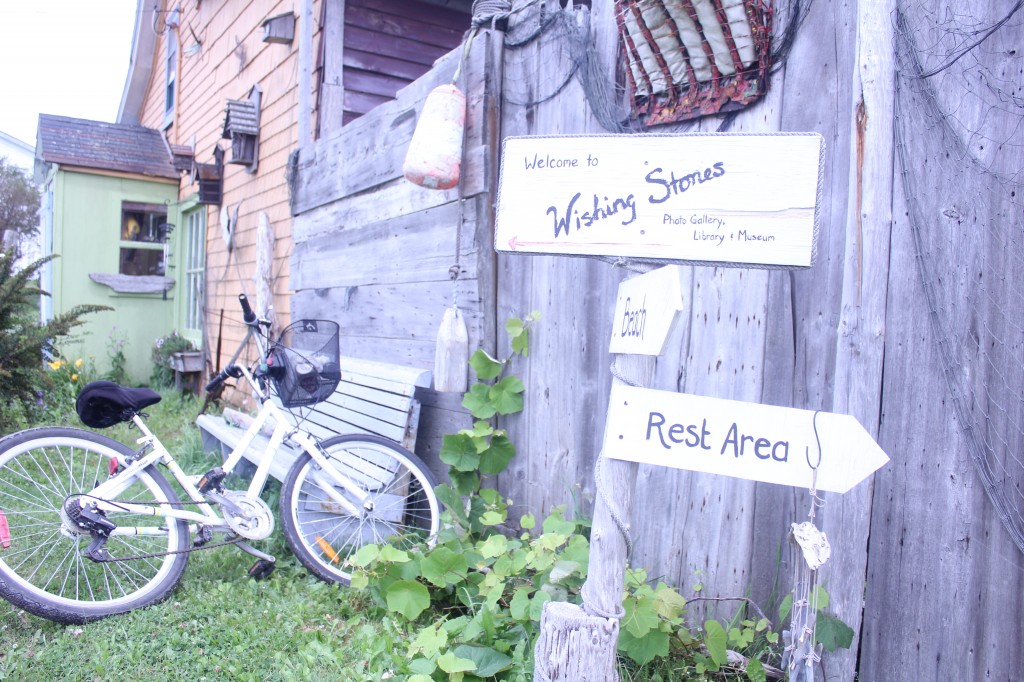 Hillary came to live on Tancook with her family in the 70s. Her shop, Wishing Stones, is a library meets museum meets art shop meets sea glass experience. 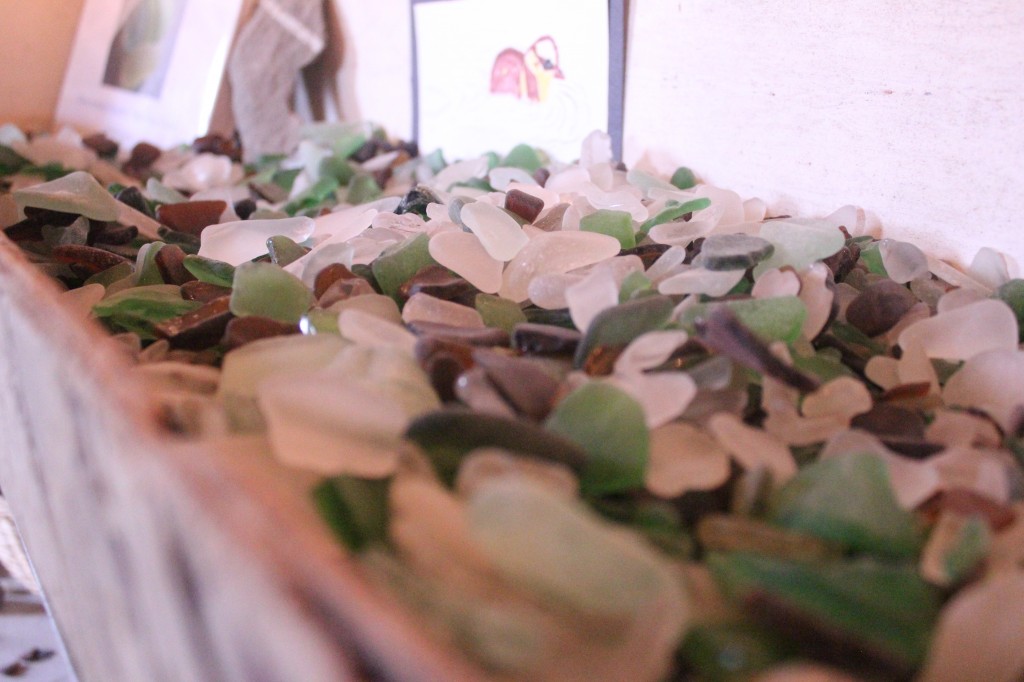 Hillary is equal parts kind and talented. Her shop was buzzing with other guests when we arrived but she still had a way of making us feel immediately welcomed. When the crowd dispersed she took us through a short lesson in sea glass then sent us off to the beach. 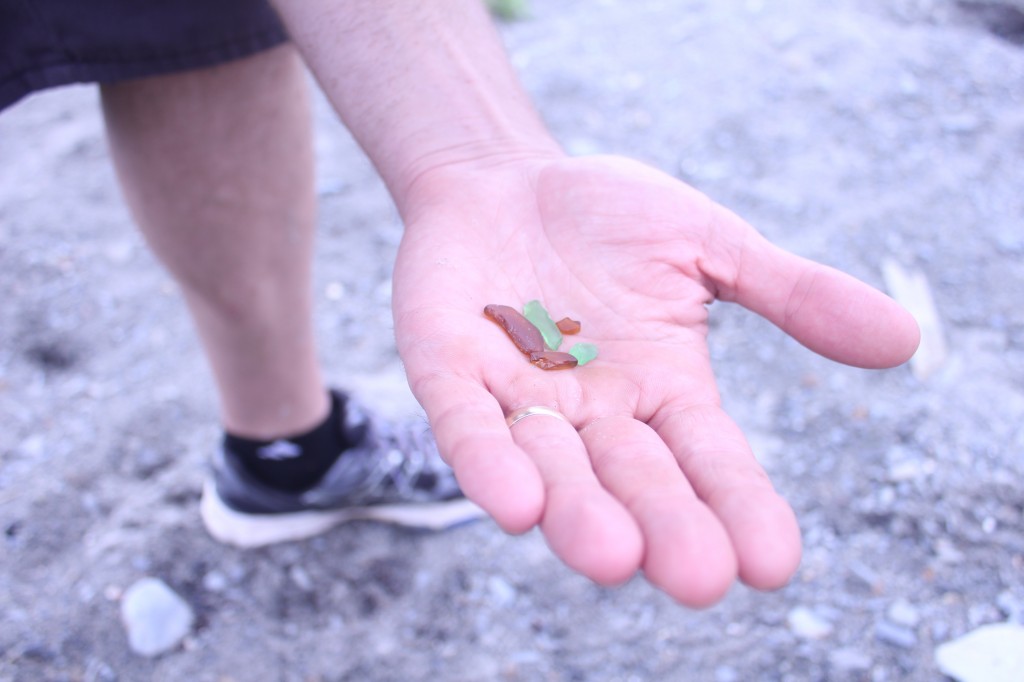 We had arrived a little later than we had planned and on a day that had a particularly high tide at that time. So, not ideal for sea glass searching, but we still found a few pieces (well, Drew did, but in my defense I was busy taking photos). Hillary keeps some spare choice finds back at the shop, the spoils of her nightly beach crawls. 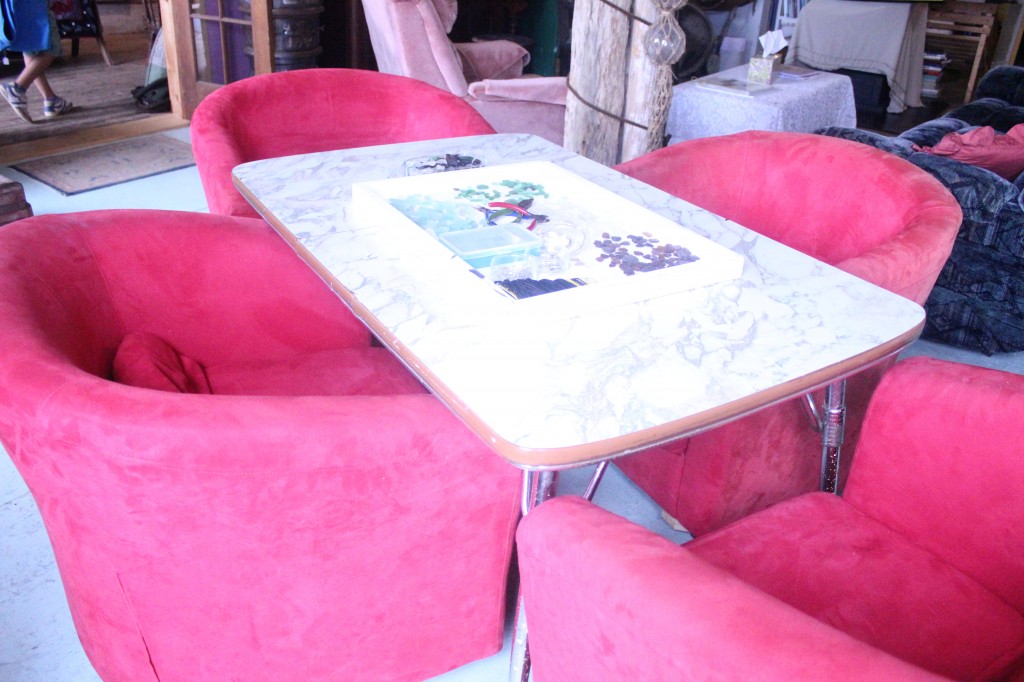 We headed back to meet her and sank into the big red bucket chairs that surround the sea glass craft table. Hillary showed us how to make earrings, expertly twisting and bending the wire in a matter of moments to create a set of purple earrings.

Then it was our turn, Hillary helped us through the hiccups and soon we both had our own wearable art, a unique souvenir from the Tancook shores. 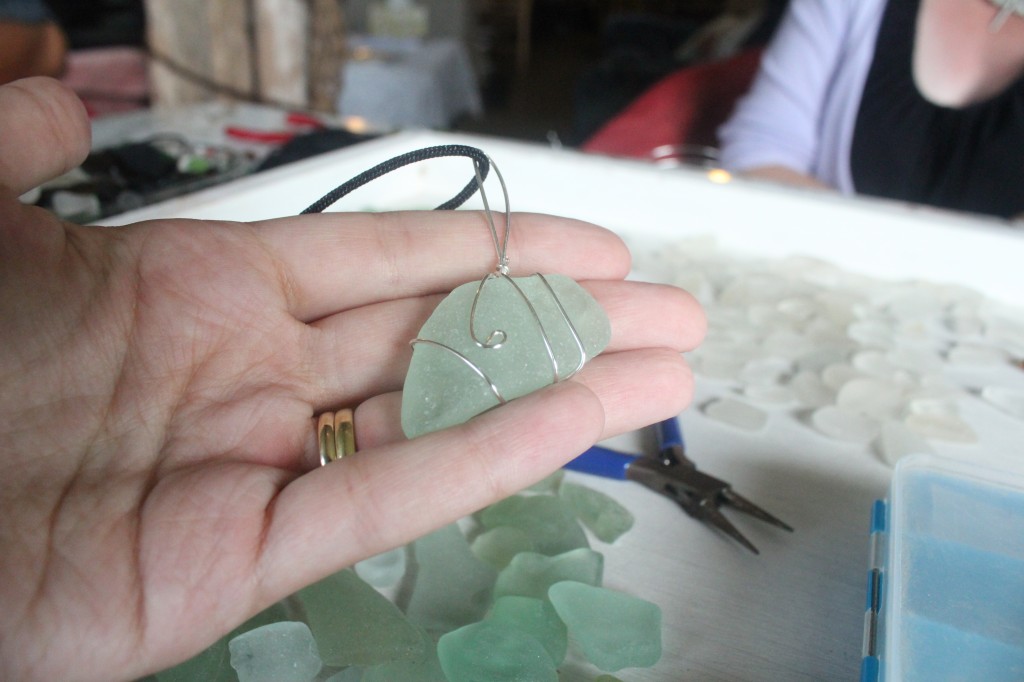 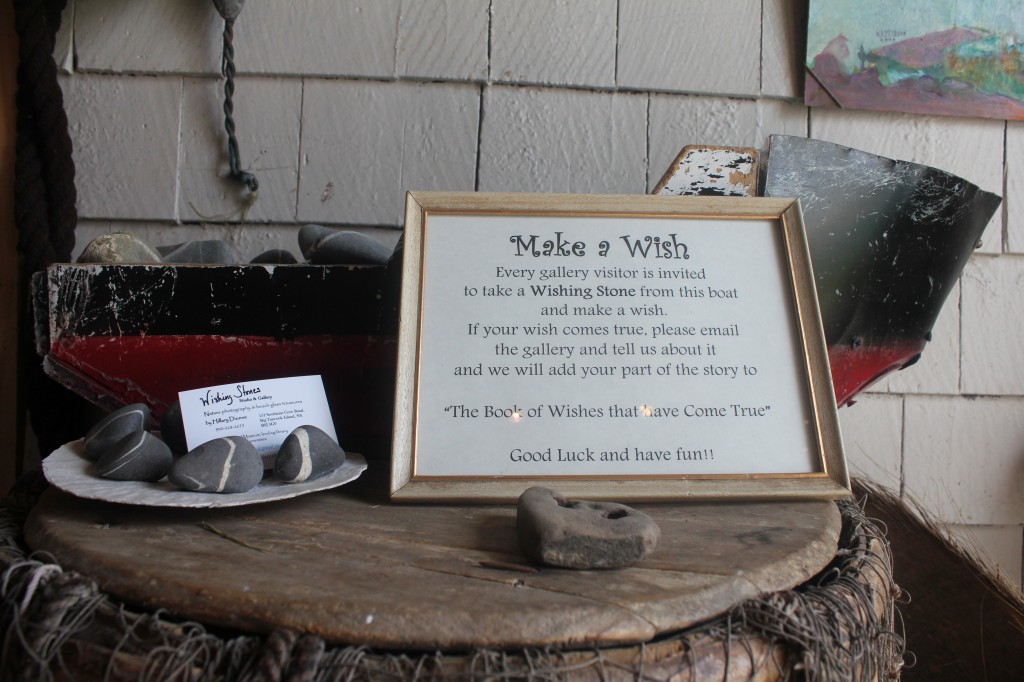 We didn’t want to leave. Hillary’s shop with its library, stacks of board games, café and museum was extraordinarily cozy and we’d become quite enchanted with this island of just over 100 people. 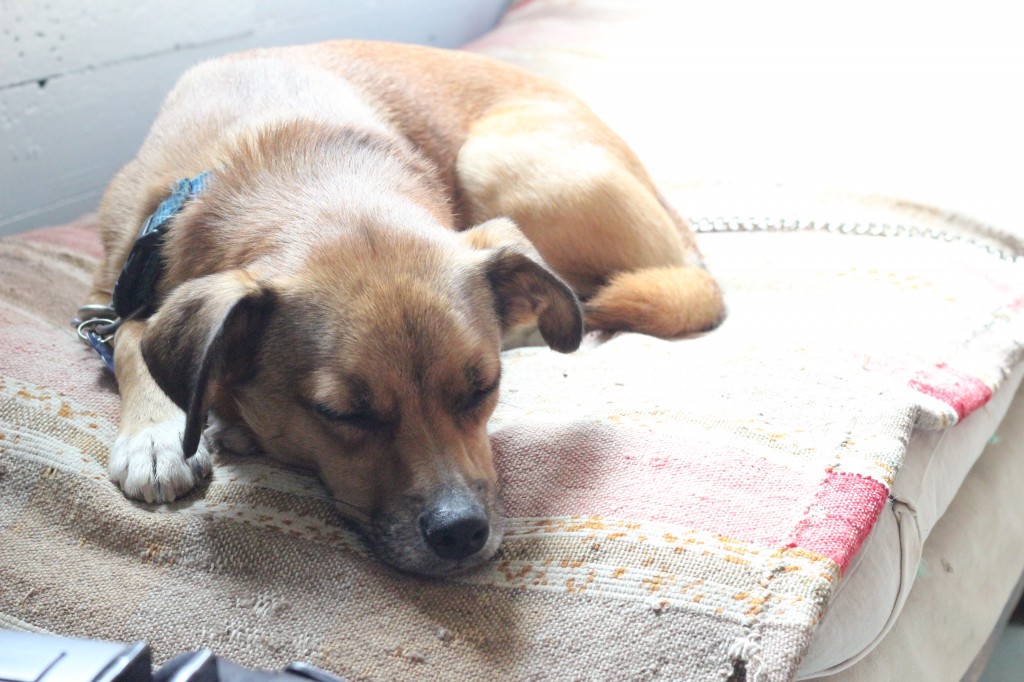 Charlie decided to make himself at home at Wishing Stones!

As we left, Drew deemed it our best date of the summer. I agree. Between winding the quiet streets, the friendly locals, the sights, the sounds, and our newfound skills, it was one heck of a Nova Scotia experience. 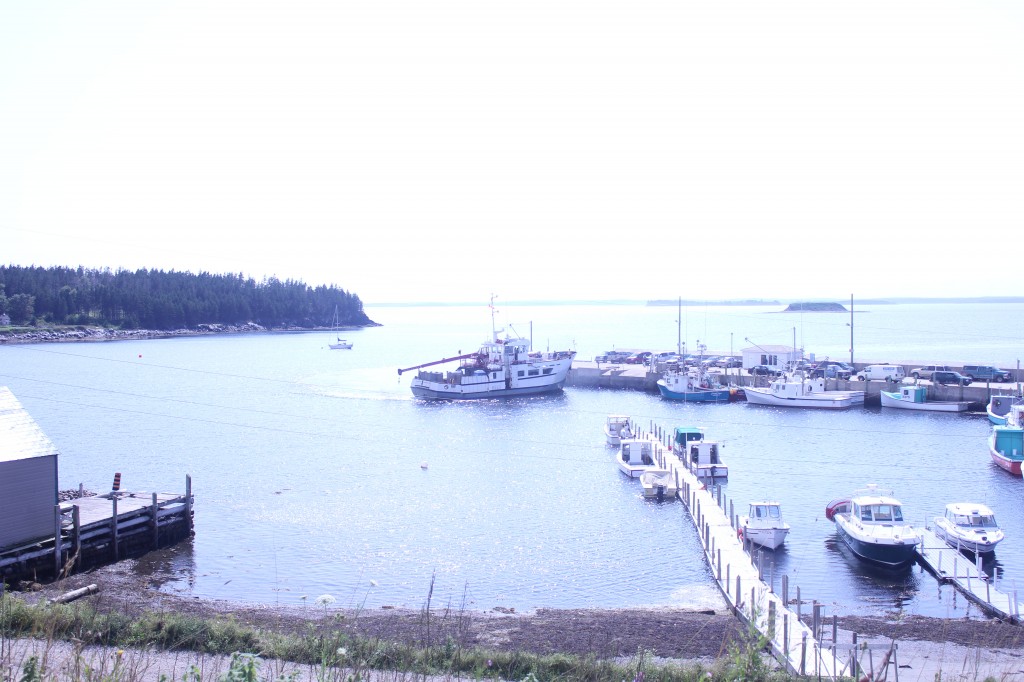 Book this experience (or find other Experience Nova Scotia Tours) at: http://www.experiencenovascotia.ca

We were hired to create a video of our Tancook adventure – so, our expenses were covered for this adventure and we were compensated for the video that we produced. We had so much fun on Tancook that we decided to also share it as a written post. Our little adventure on Tancook was a blast, if you go, we’d love to hear about it.