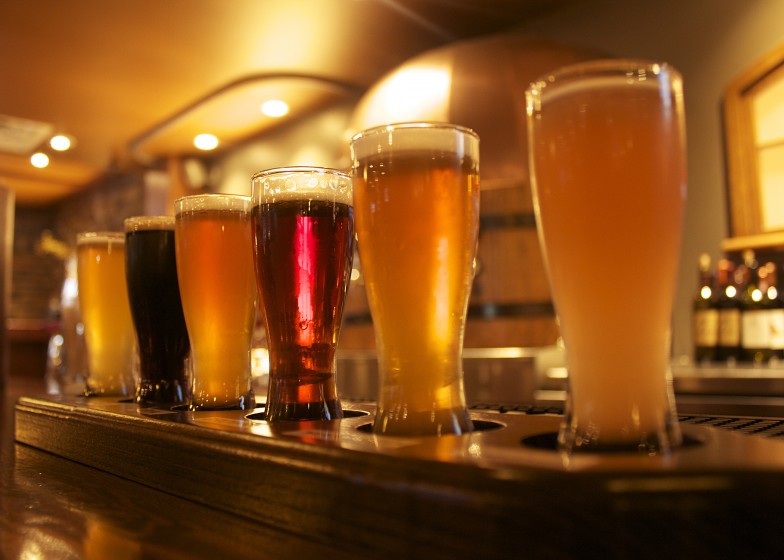 I make a habit of checking out restaurants that A. brew their own beer and B. offer sampler trays of said craft beer.  What the big beer brands have in marketing, microbreweries often make up for in devotion to well-crafted, flavourful beer.

I had it on good authority from several people on Twitter that Greg Nash, Rockbottom’s (@RockbotmBrewpub) brewer, is the local superstar of craft beer.  Thanks to @monochromegod and @benwedge for pointing me in the right direction.

Rockbottom’s flight of beer is $6 for six samples.  It includes their four regular beers and two seasonal selections.  Their regular craft beer options include Fathom IPA, Big Water Brown, Jacktar Stout and Deadwood Wheat.  Of these, the Fathom IPA really stood out.  It’s hoppy like an IPA should be, but it’s kept in check by the notes of citrus and grapefruit pith, giving it some sweetness to go with the bitterness.

The summer seasonals are the Hasakappu Weisseand and Mangled.  I’m not a huge fan of mango anything, and I was skeptical of a mango beer, but this ale blew me away.  With that sample it took its place as my summer beer of choice.

I didn’t have time to follow up the sampler with a full pint, but, luckily, Rockbottom has jumped on the Growler train. We picked up a growler of the Mangled to share with friends over the weekend.

Rockbottom also carries a curated range of craft beer from around the world. The are located right in the heart of Halifax in an environment that is cool and inviting. The best day to visit is Saturday to take in the firkin, a small batch of experimental craft beer. There is a different batch launched at 2 pm each week.