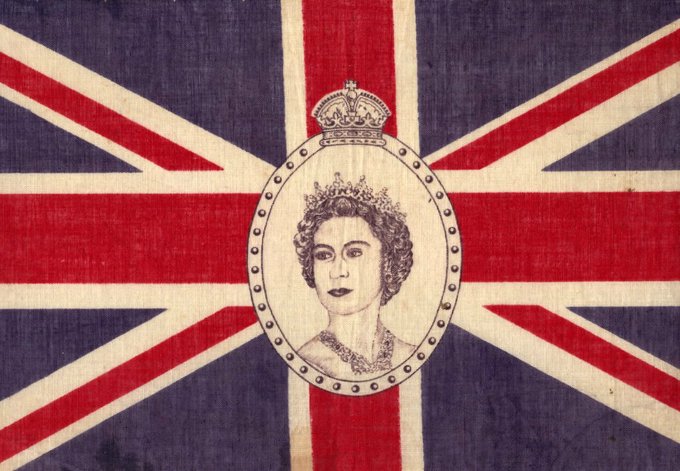 It hadn’t occurred to me that maybe I might have something to say on the occasion of the passing of our Queen. But as I listened to commentators marvel at how the world had changed over her long reign I realized that some of my earliest memories are associated with the monarchy. They are not significant memories but they are easy to date, and they help me recover associated experiences and feelings.

November 8, 1951 was rainy and cool, and my mother said we were going to see a Princess Elizabeth! We walked the short distance from our house on Walnut Street to the Dalhousie University campus and waited in a small crowd that lined either side of the sidewalk that runs between the old MacDonald Library and the Law Library (now the Faculty Club). After a while there was a ripple of excitement and through the legs of the grownups I caught a glimpse of a woman in a light coloured raincoat walking past. There was probably never going to be an easy way to get a four-year-old excited about this princess-lite experience. I was confused and disillusioned, also disappointed and damp. Reality is so real. 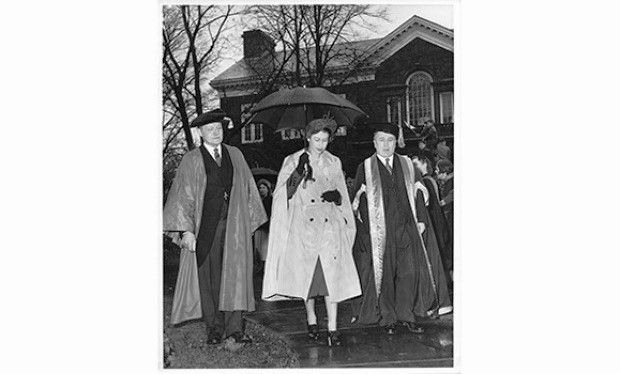 In this photo I am somewhere behind the Queen. Small and damp and underwhelmed. Photo: Dal News

Death in the morning

Three months later I came down for breakfast, on February 7th 1952, to find the dining table covered with strange and somber magazines. The princess’s father George VI had suddenly died, and my mother had gone up to the attic and brought down special commemorative issues of the Illustrated London News that marked the deaths of past kings of England. I had not been aware of the King so his passing was not a big deal. 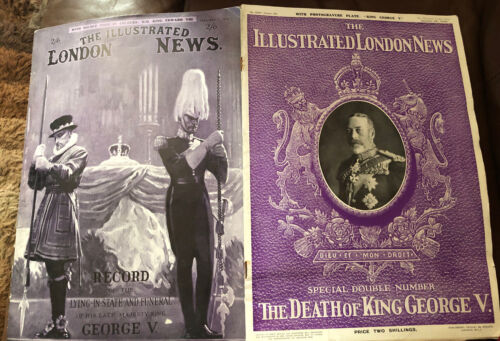 The internet has allowed me to recover dim memories of some of these long gone publications.

My memories of the year leading up to the coronation on June 2nd 1953 reveal how much has changed in the way we experience big events. This was pre-television, so the visual experiences for me were images in print.

I have strong memories of a really well-designed booklet given away by the George Weston Co, probably mother had to send in proof of purchase of some of their British-style biscuits. Called Our Queen is Crowned, the publication was produced “in order that the Canadian people may vividly visualize this magnificent and sacred event.” Listening to commentary on the radio you could follow the route of the procession on a map and there was a colour centrefold of what the State Coach and the crowds would look like, all produced months in advance of the actual event. 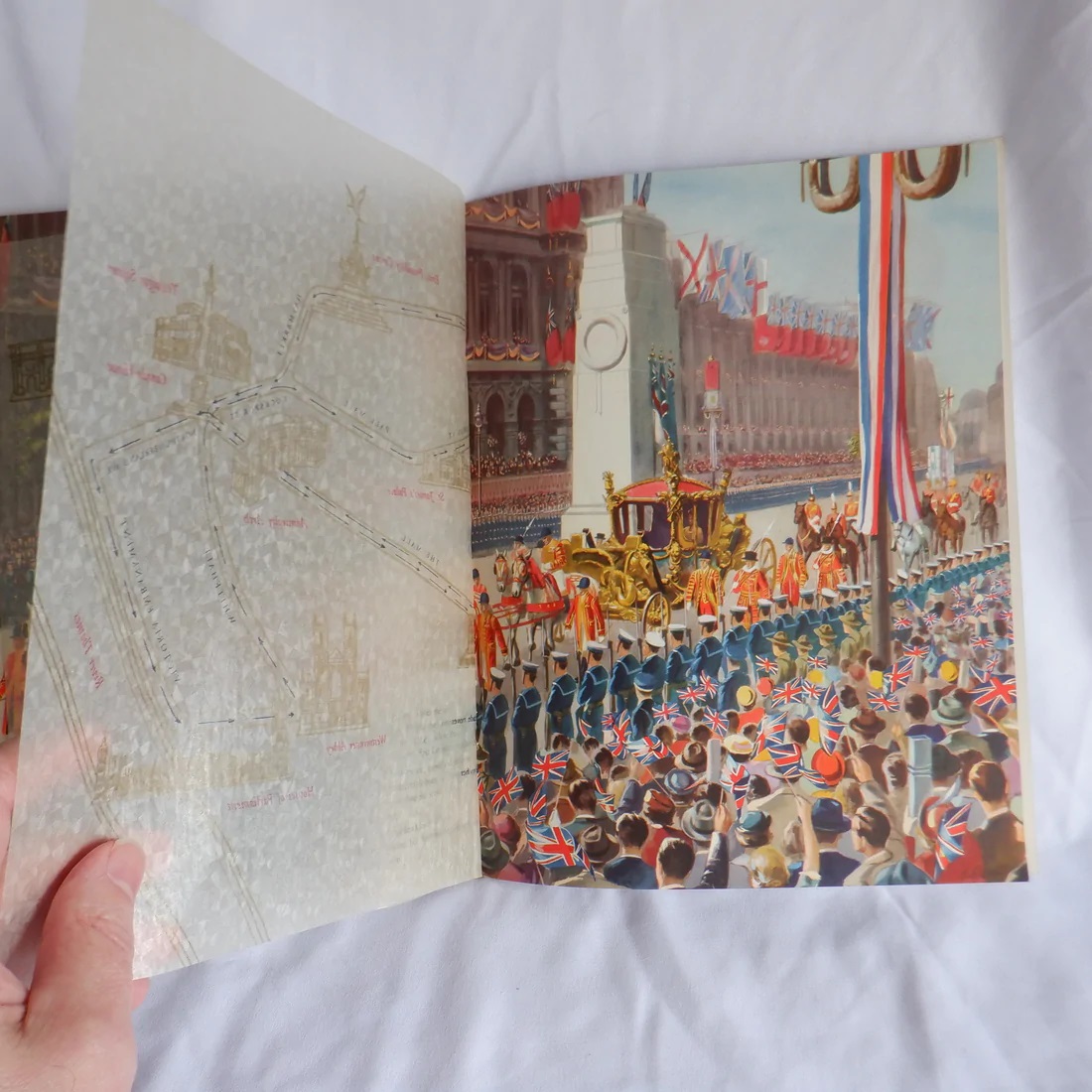 The first time I saw film of the coronation was when our grade one class was taken (in the fall of 1953) to one of the theatres on Gottingen Street to see a documentary. We probably saw the Academy Award nominated A Queen is Crowned narrated by Lawrence Olivier.

So you can visualize who was acquiring these little memories, here is my class picture from 1953. I’m the toothless lad in the top row, just to the right of the door handle. Look like a reliable source? We are dressed for some festivity (the rites of spring?) and arranged on the seldom-used front steps of LeMarchant Elementary. 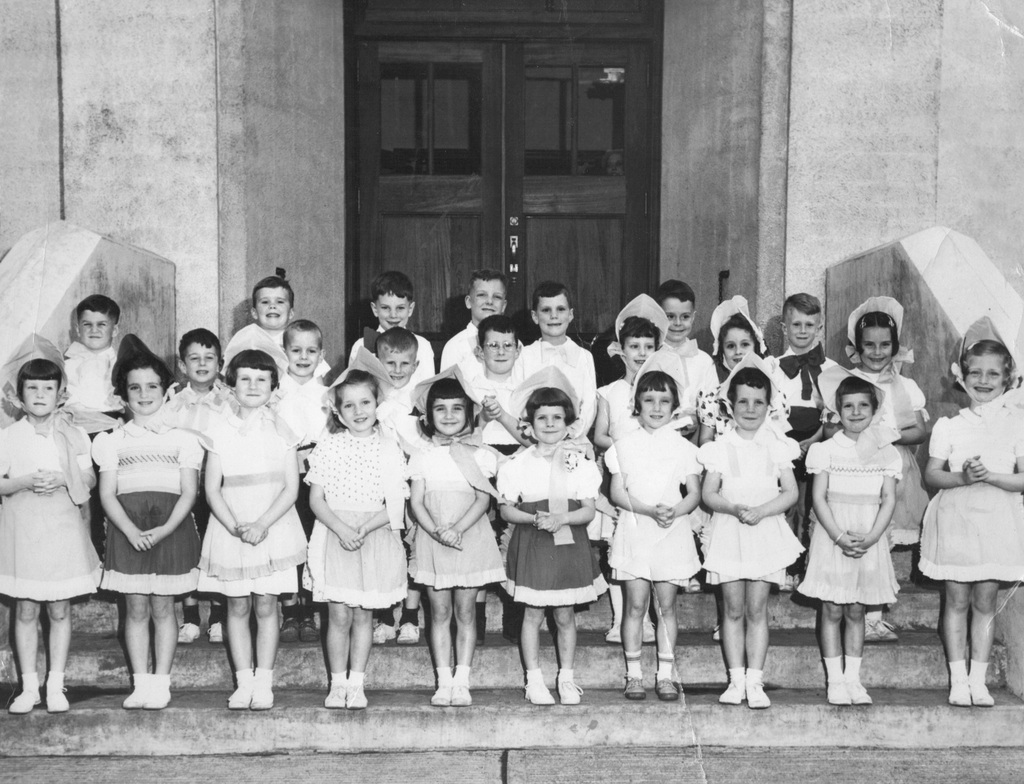 Eat your hearts out, Disney princesses

Queen and coronation-themed stuff flooded our lives for years. Every school child in Canada, I believe, received a commemorative bronze medallion. 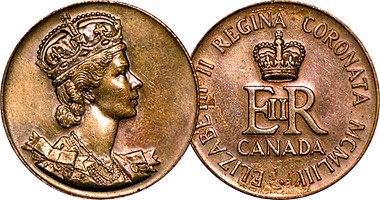 This unused scrapbook of poor quality paper is still somewhere around the house. 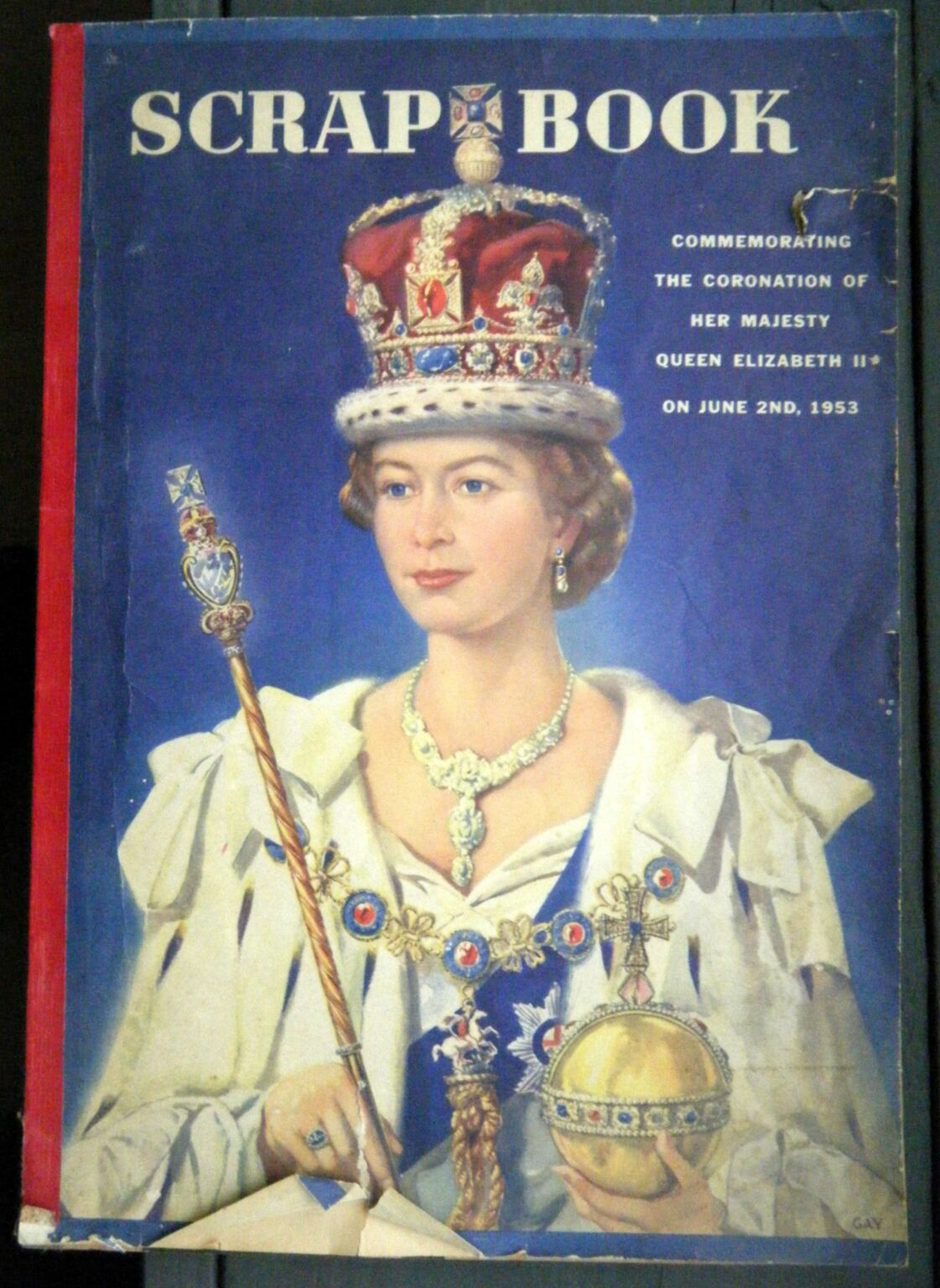 Some of the souvenirs were quite nice, like this 3D panorama of the coronation procession. This is a reproduction made for the Silver Jubilee celebrations in 1977. 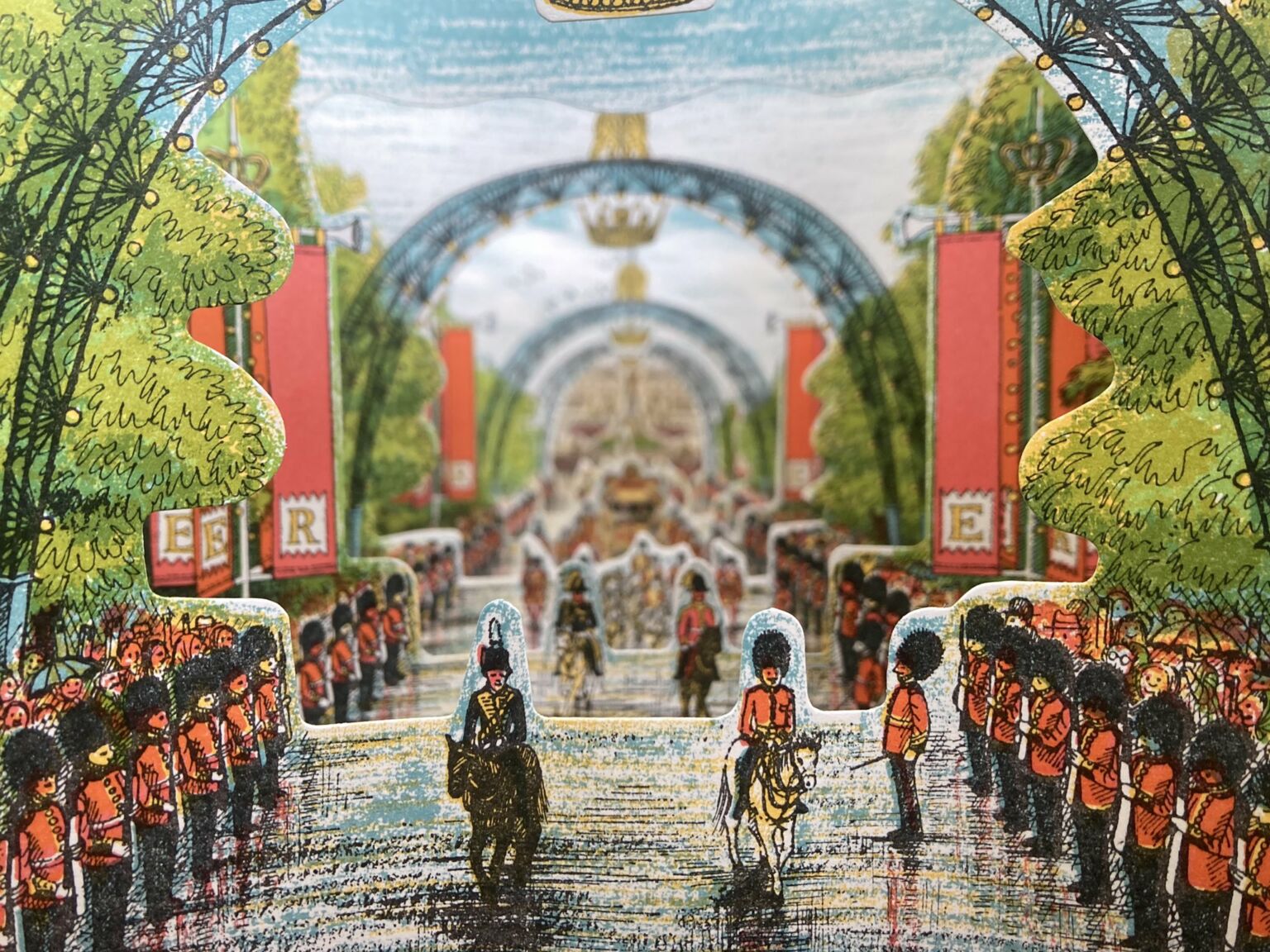 What do you want to be when you grow up?

Along with the Queen, other members of the royal family received their share of the attention. I could identify with Prince Charles who was just a year younger that I was. Children are often asked what they want to be when they grow up and I did not have a ready answer. One day during this coronation period it occurred to me that being a prince might be a good job. I excitedly told grownups my plan and they without hesitation said it could not happen. I protested but to no avail. Perhaps this early disappointment explains why it took me so long to figure out what to do when I actually grew up. 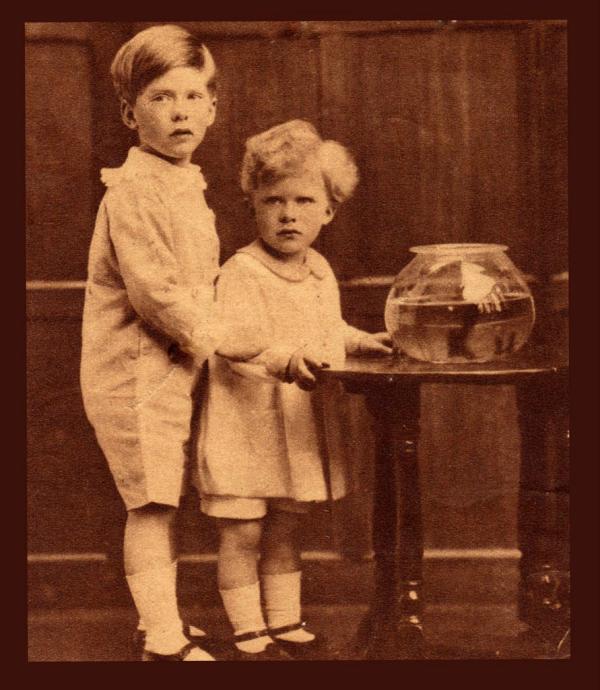 I don’t know why this photo of Charles and Anne and perhaps a gold fish was around our house, but I love it.

The Queen was on every coin we spent and stamp we licked. Her picture hung at the front of every classroom and in elementary school at least we sang God Save the Queen at the start of every day.

Her portrait also hung in many government offices. A couple of years ago I was surprised to notice this portrait still displayed in the Almon Street post office, a rare survivor. 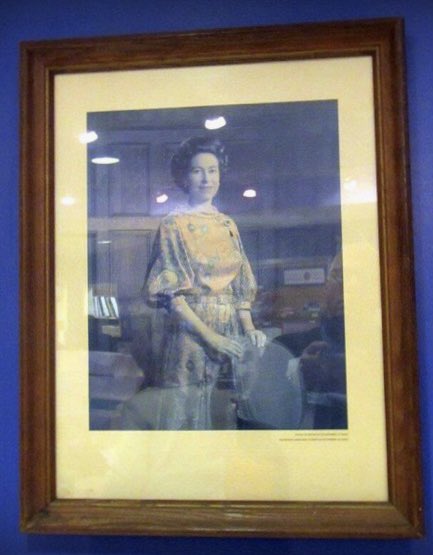 In movie theatres after the last film of the day God Save the Queen was played. If you skipped the credits and dashed out you were saved. But sometimes you wanted to know who was the best boy, or where that sunset was filmed. When the anthem started everyone in the auditorium stood or paused their escape. The short film that played during the anthem was changed a couple of times as the Queen aged. I remember quite a good version of her riding during a Trooping of the Colours. Can’t recall when this anthem-playing practice ended, late 70s? 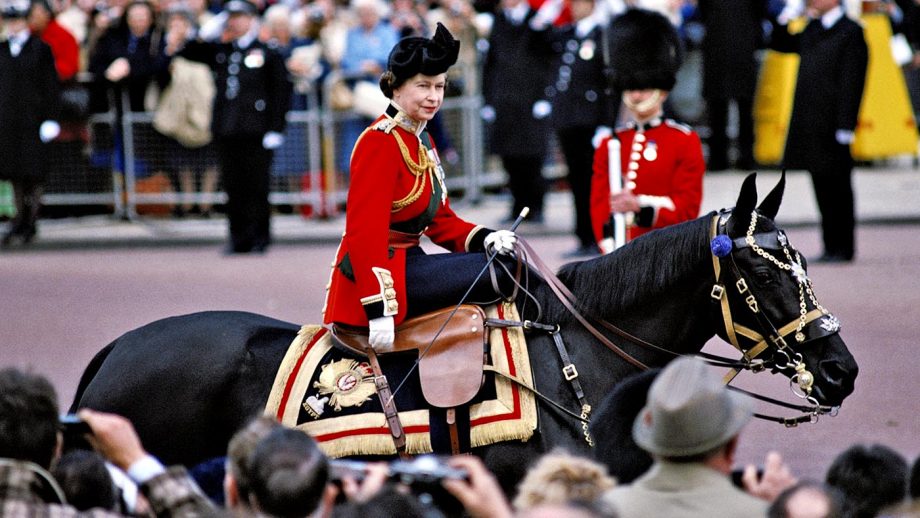 When Charles and Diana visited Nova Scotia in June 1983 we made no plans to see them. Then on the night of the State Dinner at the Nova Scotian Hotel, we realized they would be leaving just a block away from where we lived at the bottom of Inglis Street. So we dashed through the tunnel under the tracks (we called it the pee place for good reason) and then sauntered over to where the Royal Yacht Britannia was moored.

My memory is that there was not a small, relaxed crowd of onlookers and that it was a pleasant evening. After a while a military band seated on deck started to play and limousines pulled up. Prime Minister Trudeau said good bye, and the Royals boarded and paused to wave before disappearing inside. All very satisfactory, but we stood around because the band was still playing. Then a bright light came on above a little balcony on an upper deck of the vessel. Out stepped Chuck and Di, beautifully illuminated as Britannia moved away from the quay and the band played on. What theatre and stagecraft. And all for me, or that’s how it felt. 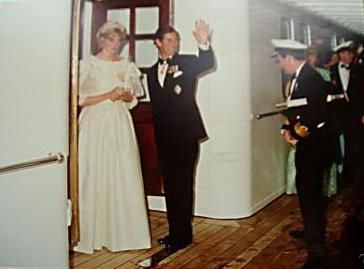 The monarchy and the royals are not that interesting to me, just a particular class of celebrity. Still last Wednesday while on vacation we made the effort to watch a replay of the Queen’s funeral in our hotel room in New Canaan, Connecticut. And I’m sure I’ll watch the coronation of Charles, although I still have pretty clear memories of how it goes from his mother’s.

I don’t anticipate collecting any mementos from Charles’s do, but to my surprise it was only a few years ago that I acquired a little earthenware mug that commemorates Elizabeth’s coronation. It has happy and glorious decoration and is one of my favourite things. 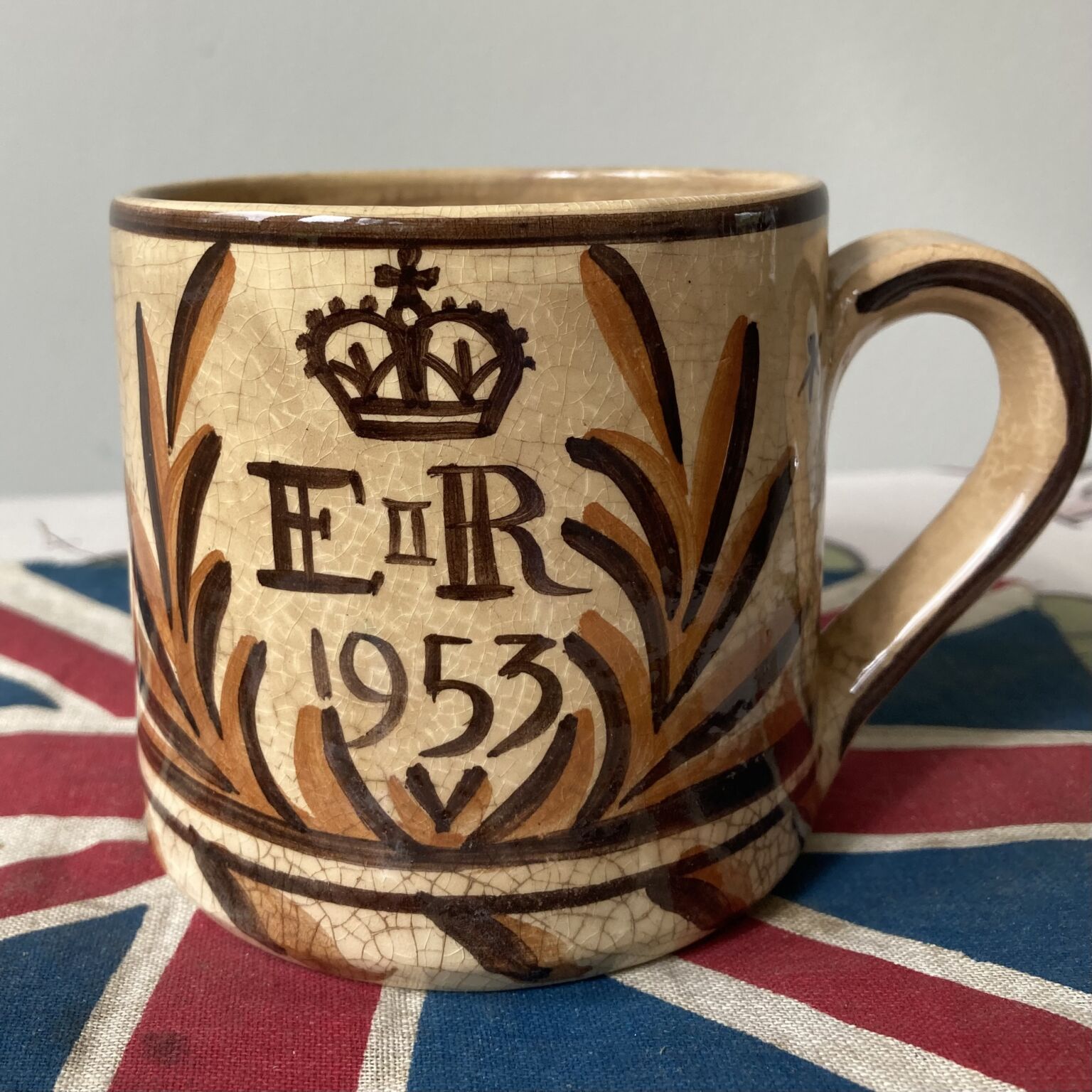 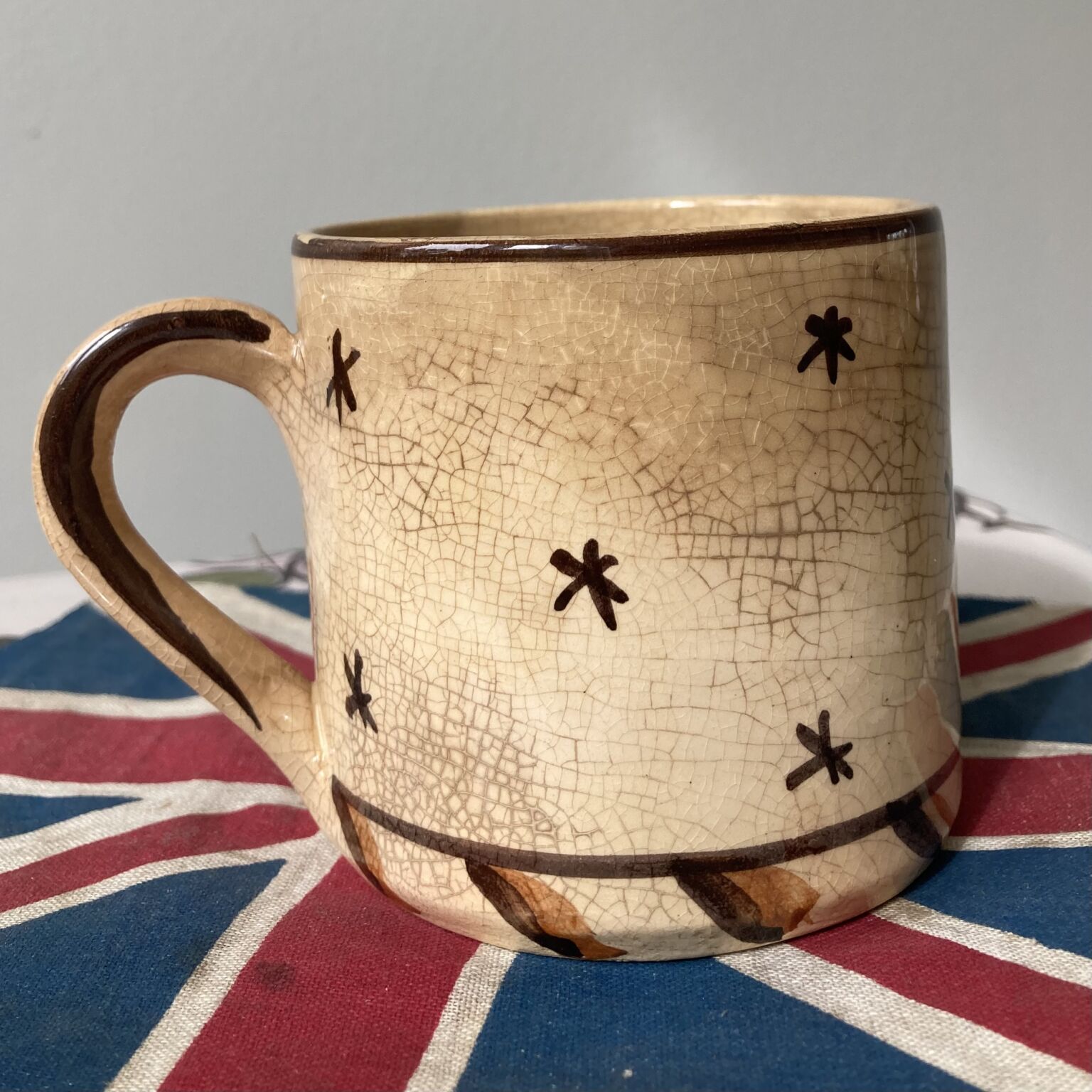 We had one of these miniature Coronation Chairs with the removable Stone of Scone. I believe ours might now be in the Nova Scotia Museum collection. 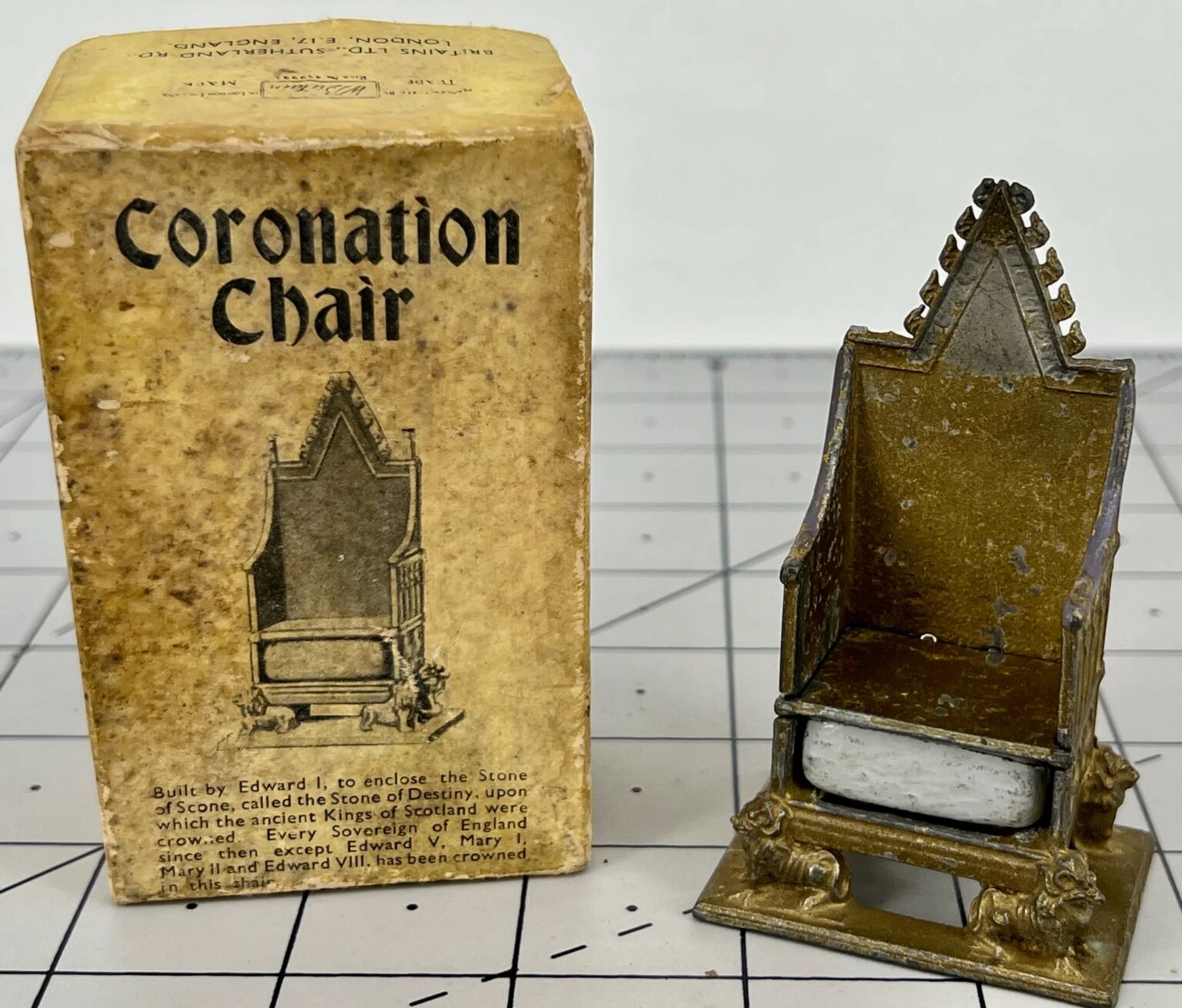