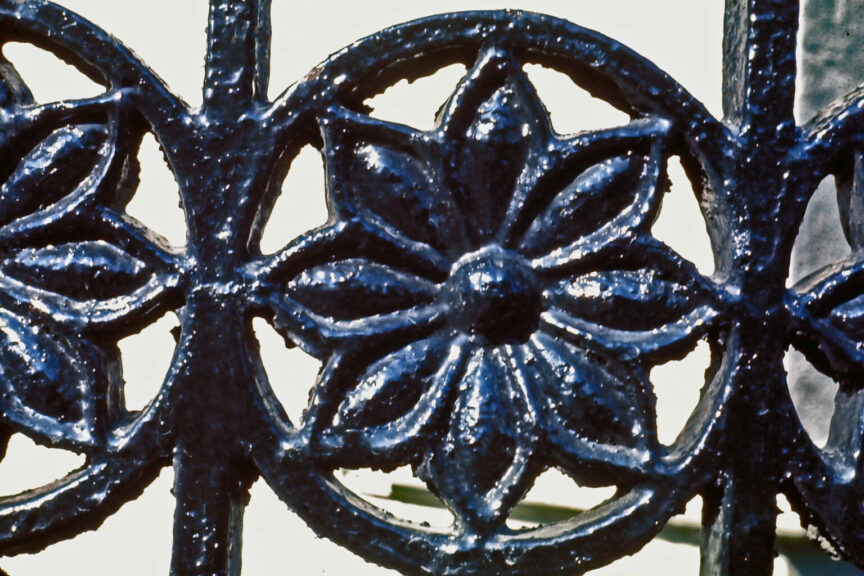 In the 1970s I kept returning to the intersection of Barrington and Spring Garden to take pictures of the three iron fences that line the corner where two of our historic commercial streets meet.

My favourite of the fences, in front of St. Matthews, has a row of flowers that could easily be converted to golden Ukrainian sunflowers surrounded by a blue circle. 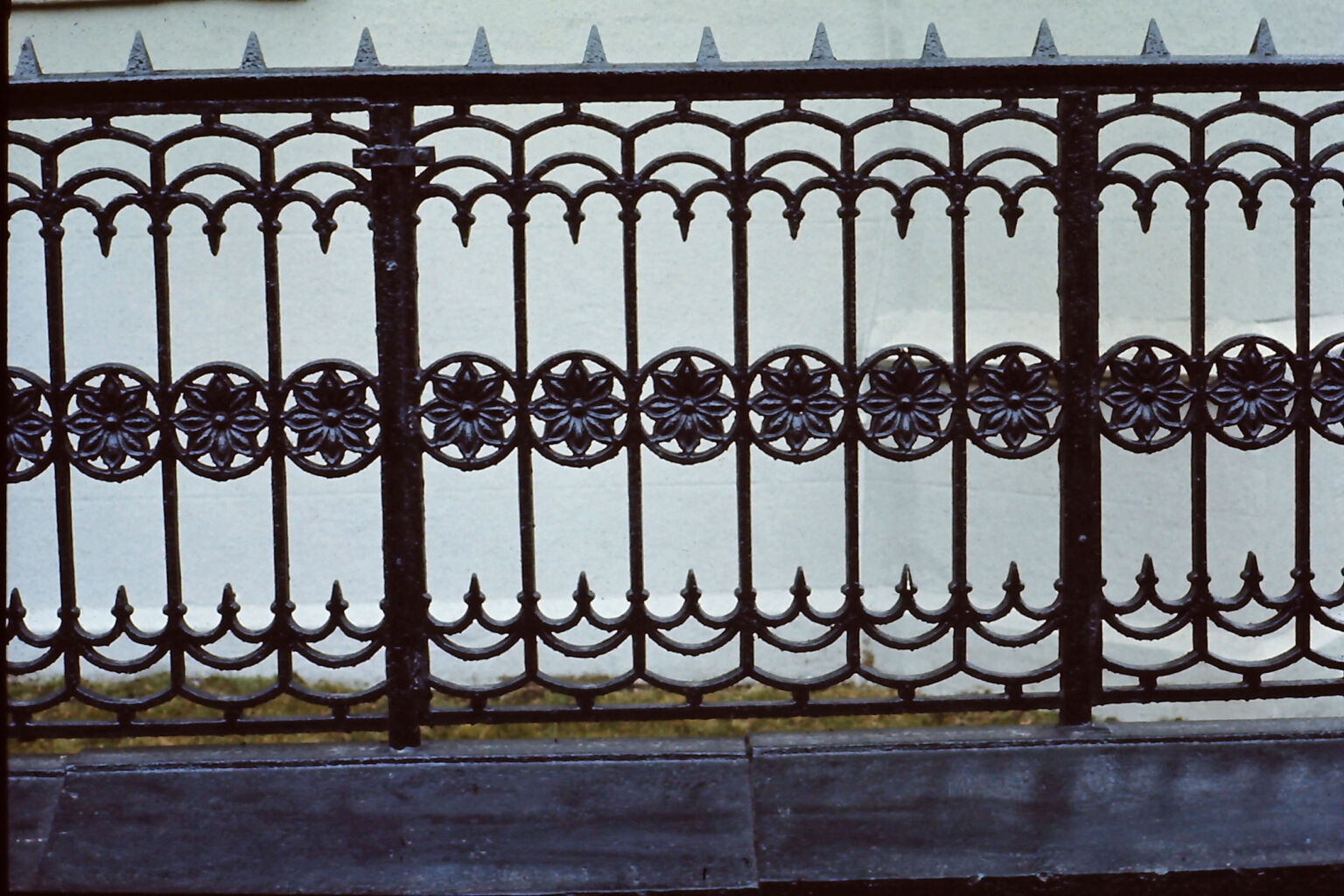 The granite posts at the entrance to the side yard of the Church survive today but this Gothic style gate is long gone (it could be replaced). If you don’t recognize the background view that’s because it is now blocked by the Maritime Centre. Hello, random view of Dartmouth. 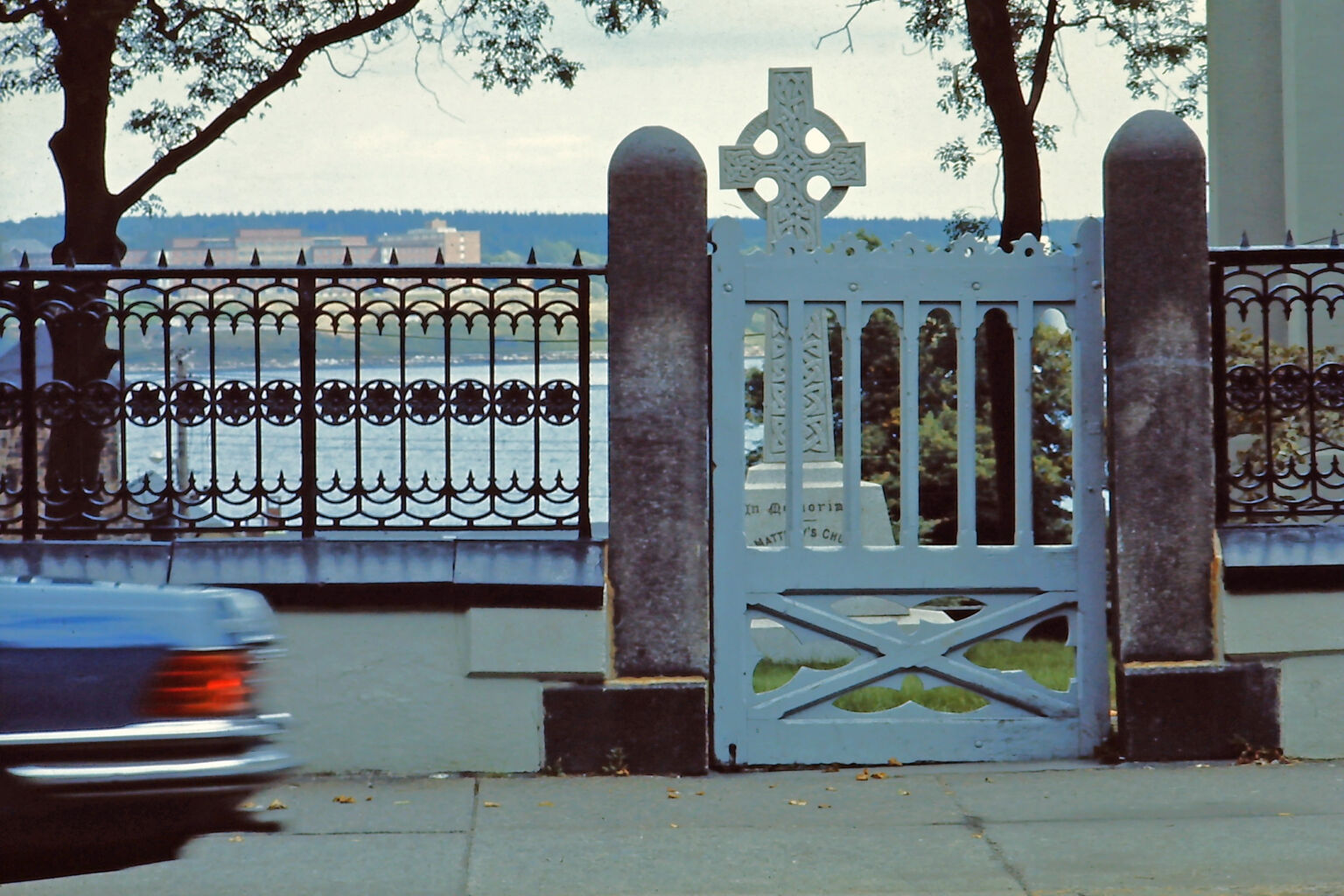 That’s the Nova Scotia Hospital across the the harbour. At this time if you said “buddy’s in Dartmouth” everyone knew what you meant. Photo c1975

The front doors of the church have theatrical cast iron hinges. 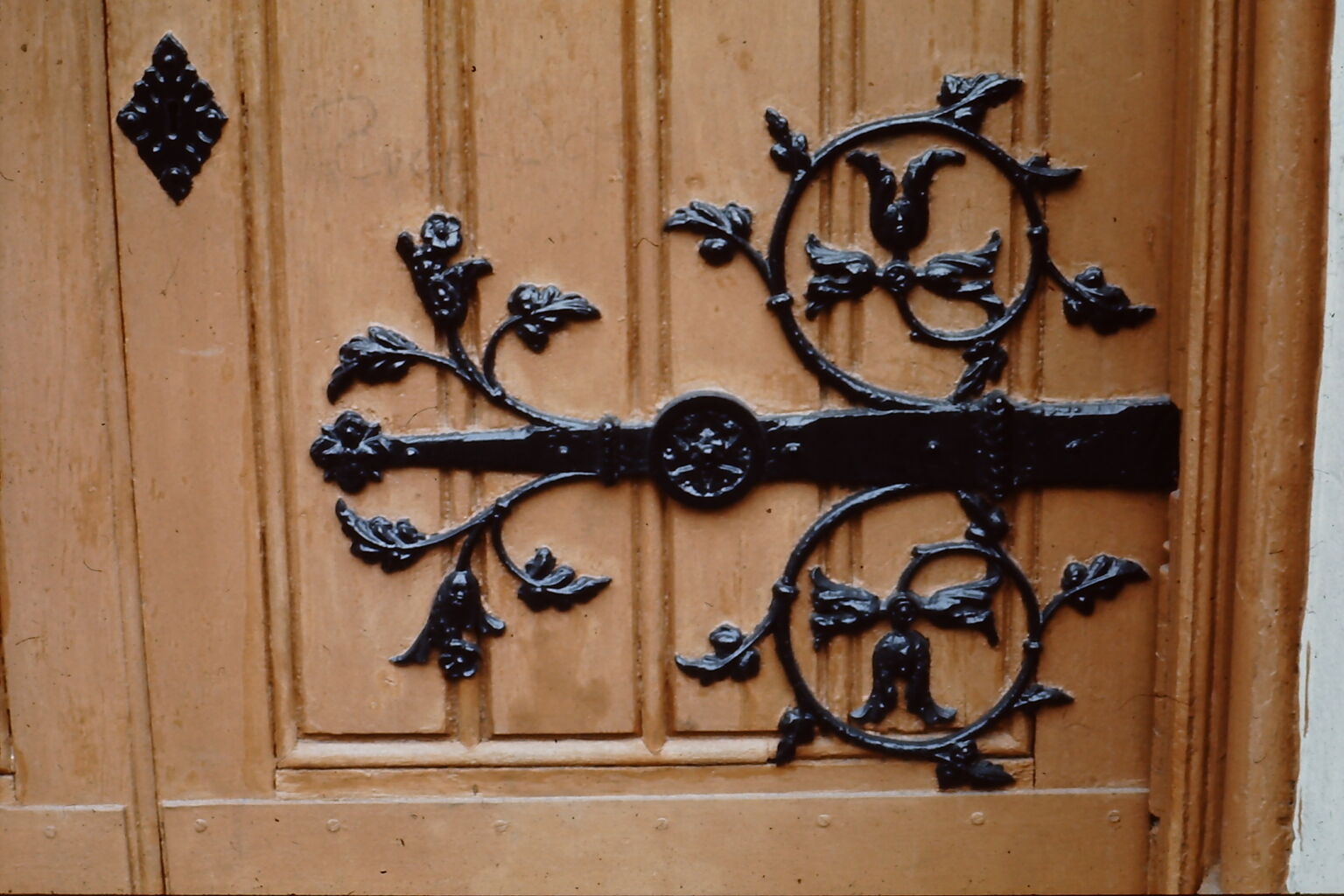 When the door was open you could see who actually did all the heavy hinge work. 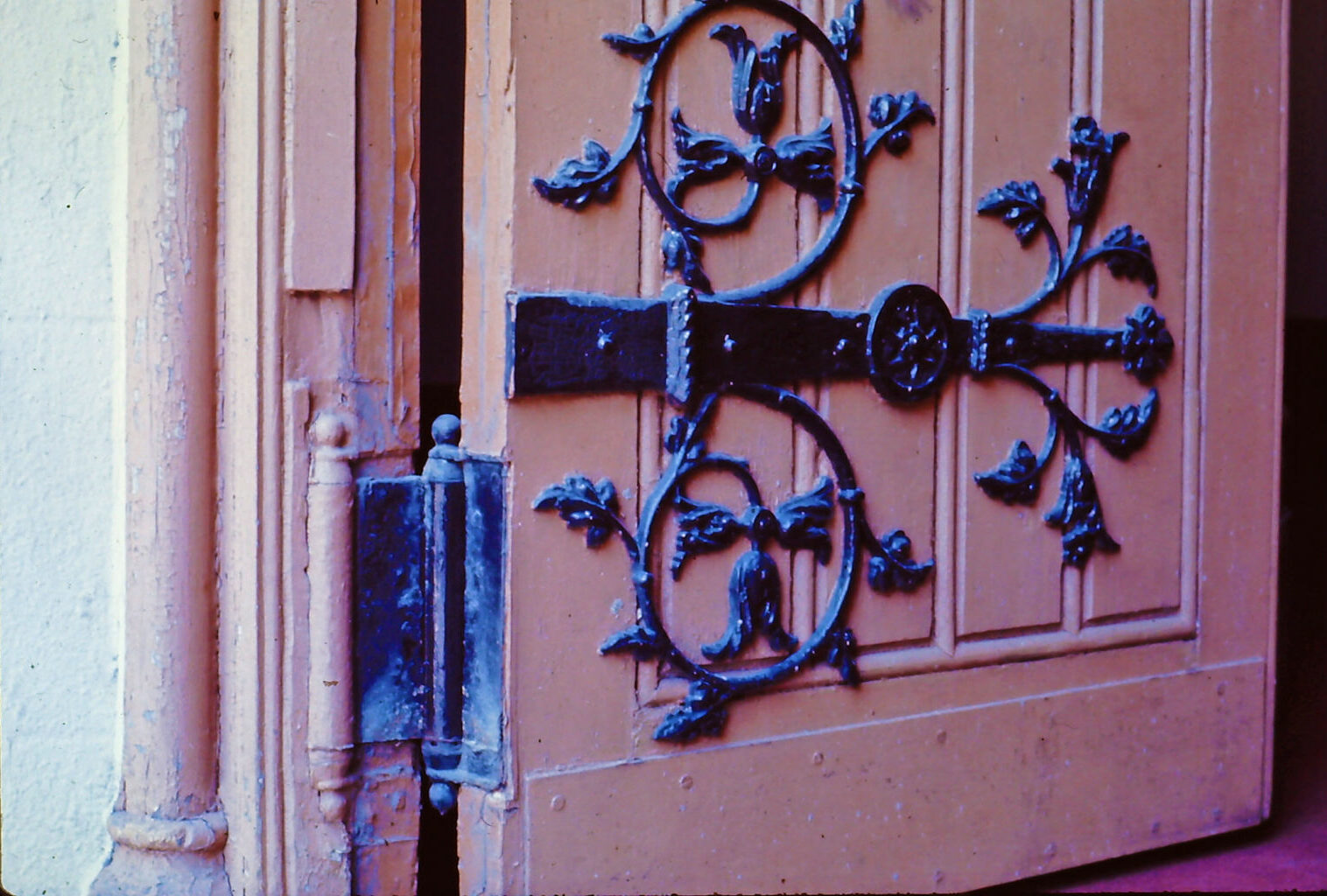 Viewed in winter light, I vote St. Matthew’s the prettiest church in Halifax. Over the decades a lot of effort has gone into maintaining the building, and that is an endless job. Churches understand the concept of eternity. 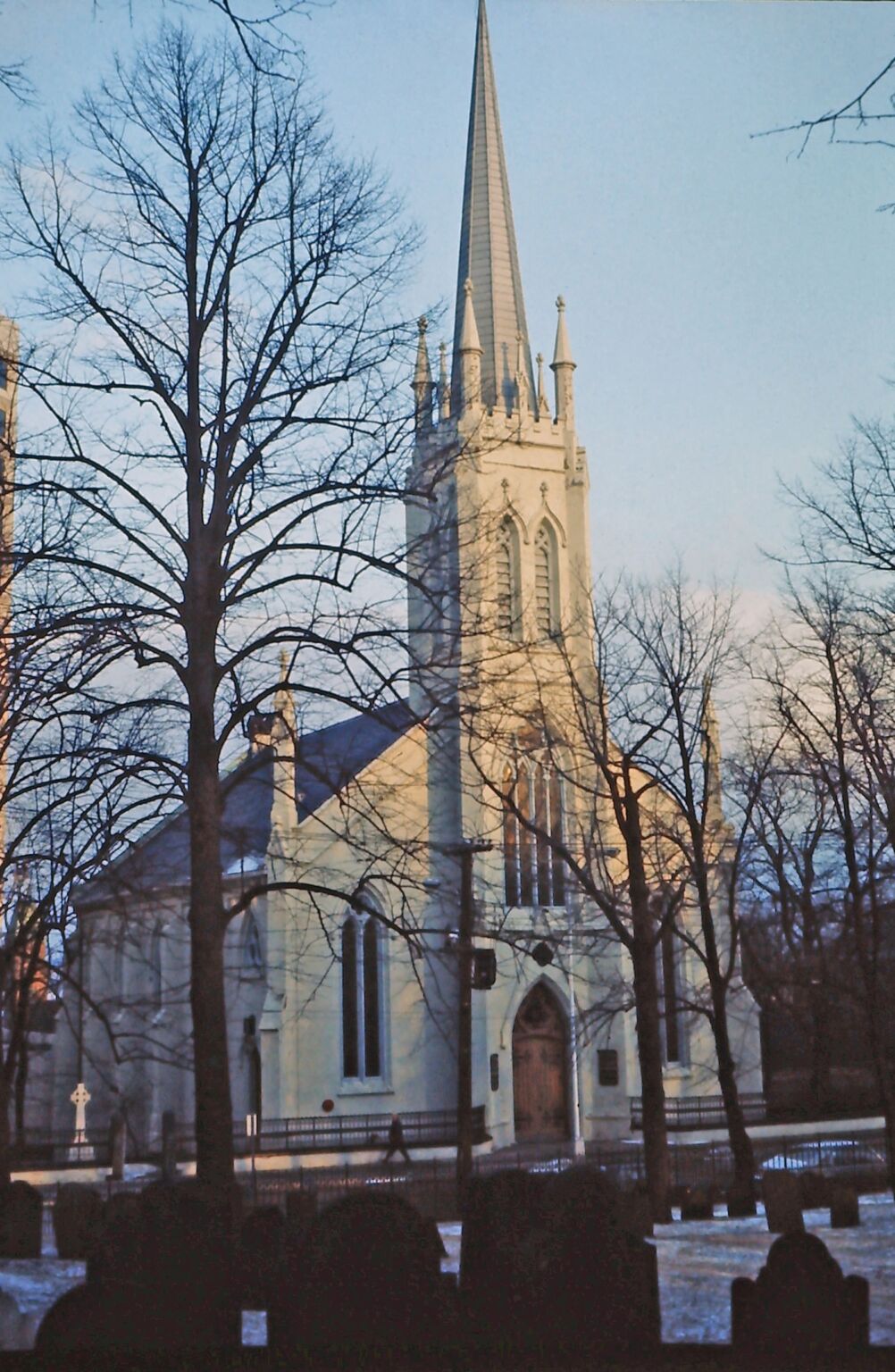 The fence around the Old Burying Ground flows down Spring Garden and then curves onto Barrington. It was an important element in the redevelopment of this area in 1860 when St. Matthew’s, the Court House and the Crimean War Memorial were all new. The fence once continued in front of the Court House, visually stitching the block together. 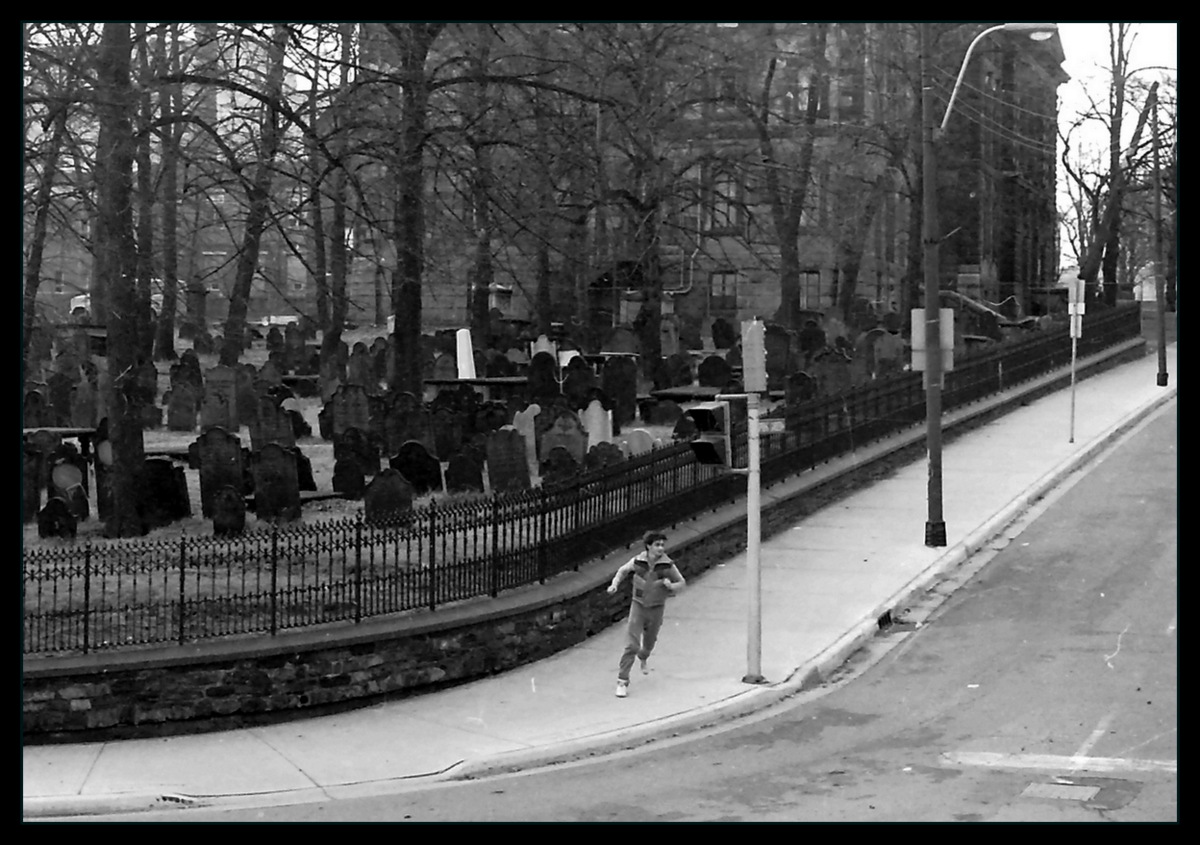 Imagine my dismay in the spring of 1983 when I happened to be walking along Spring Garden Road and saw that section of this fence had collapsed. Cast iron is very brittle and heavy; the posts cleanly snapped at their base. I don’t know what started the chain reaction, did it jump or was it pushed? 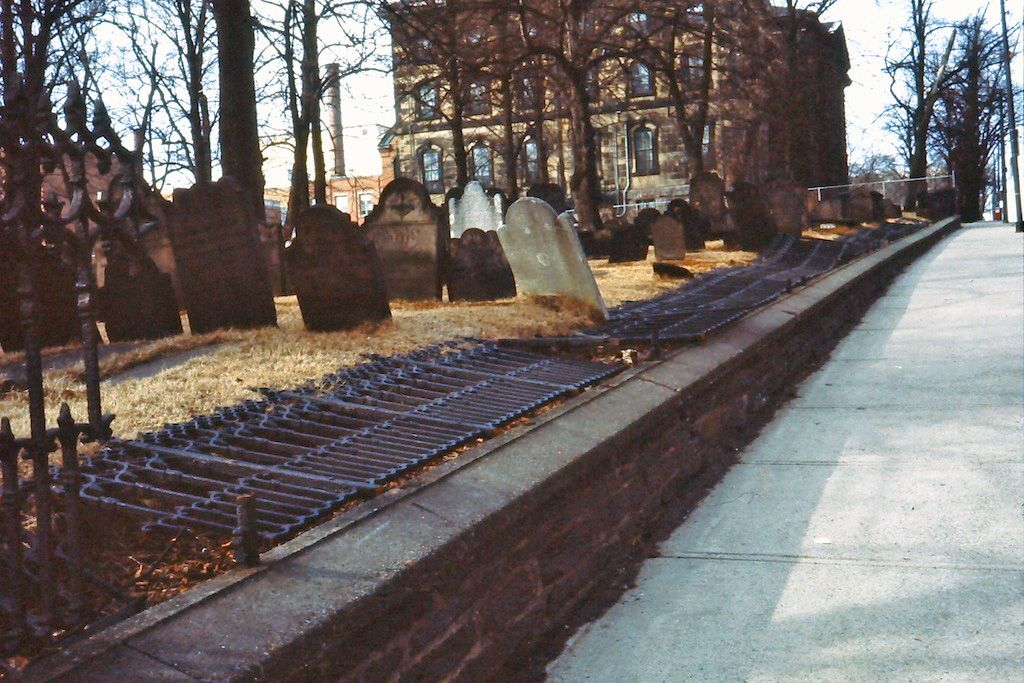 My first thought was this fence is toast and will be replaced by chain link; but somehow it was resurrected and has lived on for another 40 years. See what you can do, Halifax, if you try? 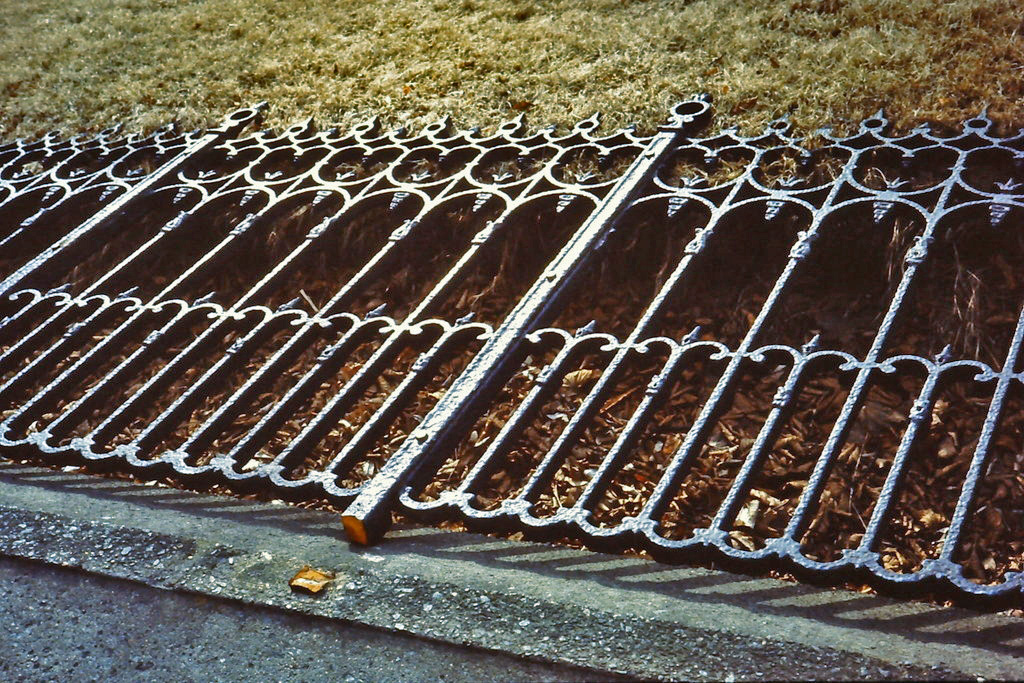 On the northwest corner of the intersection is the 1891 St. Mary’s Glebe House and its iron fence, 30 years younger than the  St. Matthew’s and Burying Ground fences. 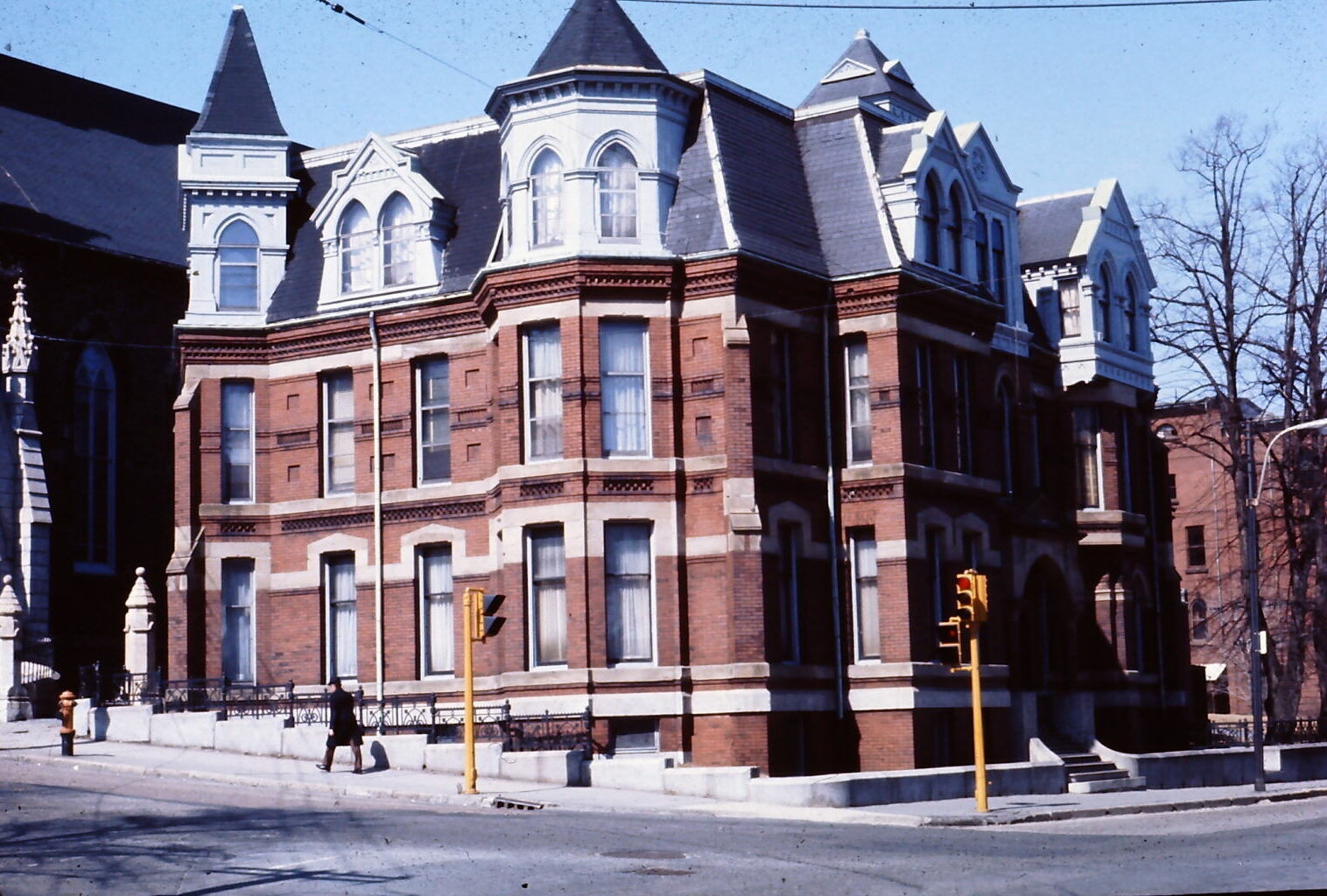 Not surprisingly the fence design is quite different from what we’ve just been seeing. I wonder if the Irish Catholics of St. Mary’s saw those little leaf forms as trefoils or shamrocks? Personally I’m going with trefoils. 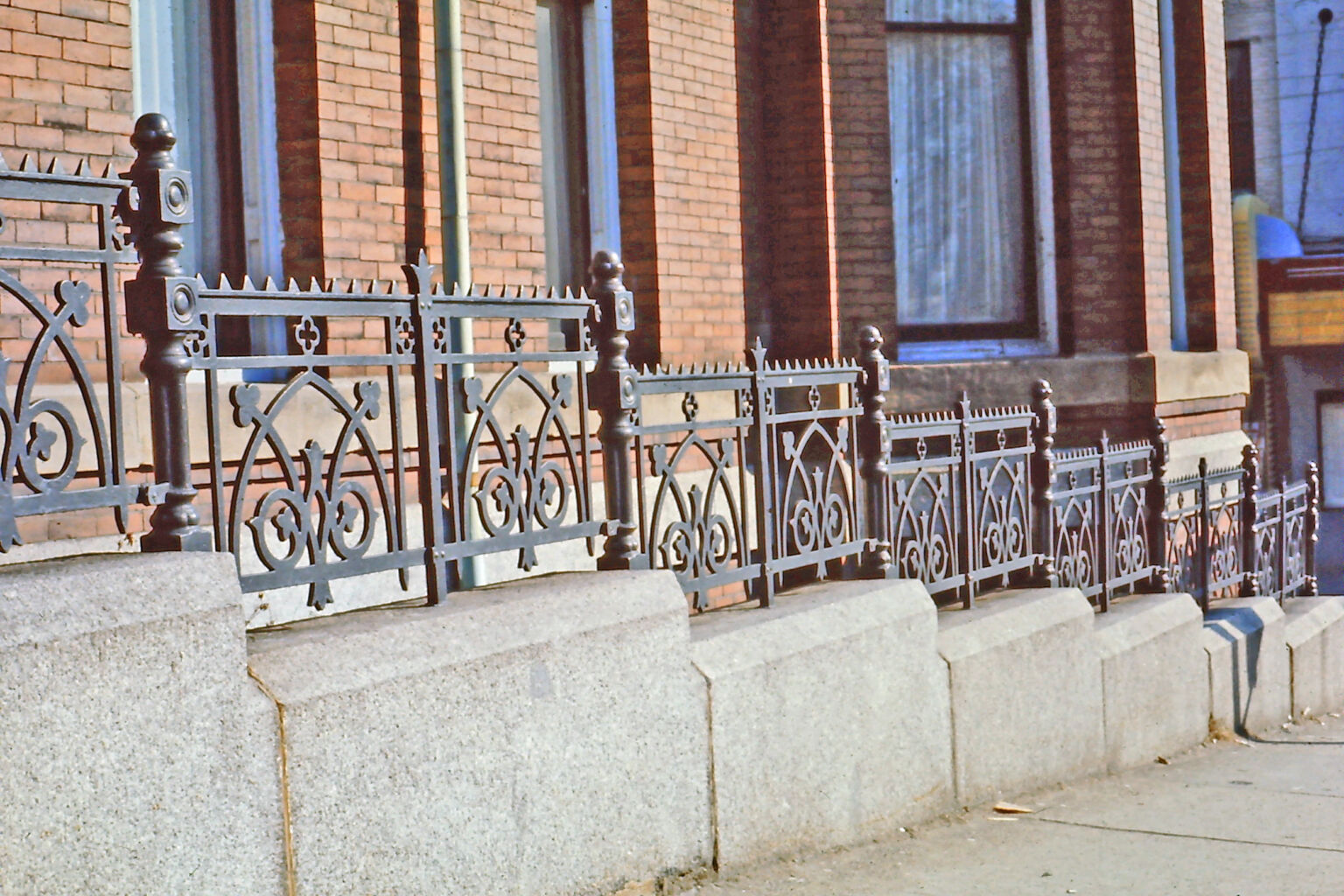 The points on the top rail are a classic element of hostile design, there is no sitting on this fence. 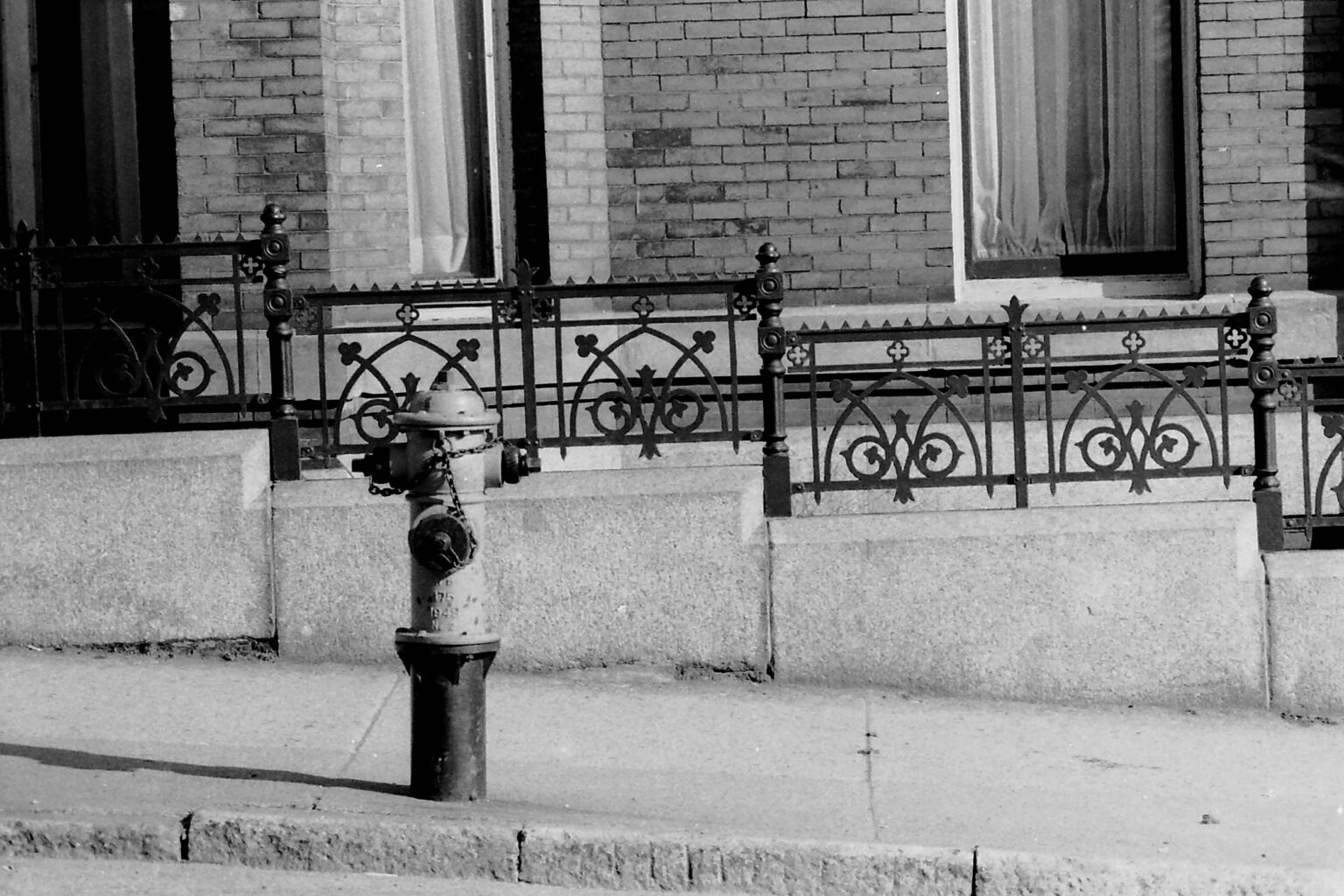 The Glebe fence is another success story. About 1995 the fence was extended up Spring Garden to surround the church’s paved-over cemetery. This might have happened with funding allocated to clean up the downtown for the G7 meeting. Whatever it takes.

Of course I’ve been avoiding the herd of elephants in the room, the monster Maritime Centre that was “completed” in 1977. The bitter wind tunnel this structure created at the pedestrian level is a good enough explanation for why the downtown failed. Not enough people cared.

In this 1978 view, the spire of St. Matthew’s still rises above the fourteen-story Maritime Centre. Now not so much because another seven stories were added in 1988. 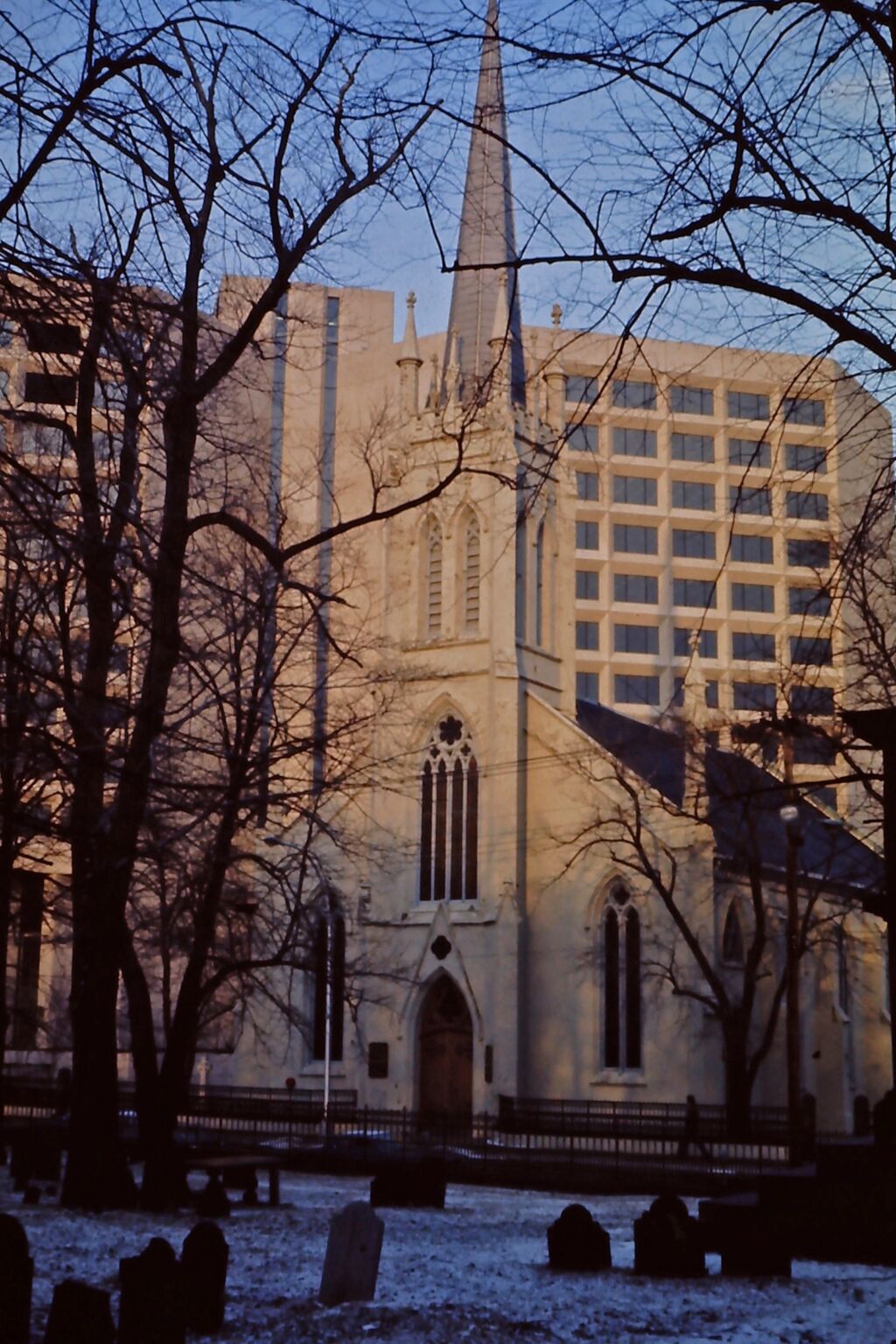 It is easy to find the story and pictures of the Capital online. In the auditorium there were eight giant murals depicting what folks in 1930 thought were significant moments in Nova Scotian history. A couple of them are easy to see today. A dramatic landing at one of the sieges of Louisbourg hangs high in the concourse at Historic Properties. People like to imagine that stone salvaged from Louisbourg was used in some of the early Halifax buildings, like Historic Properties. 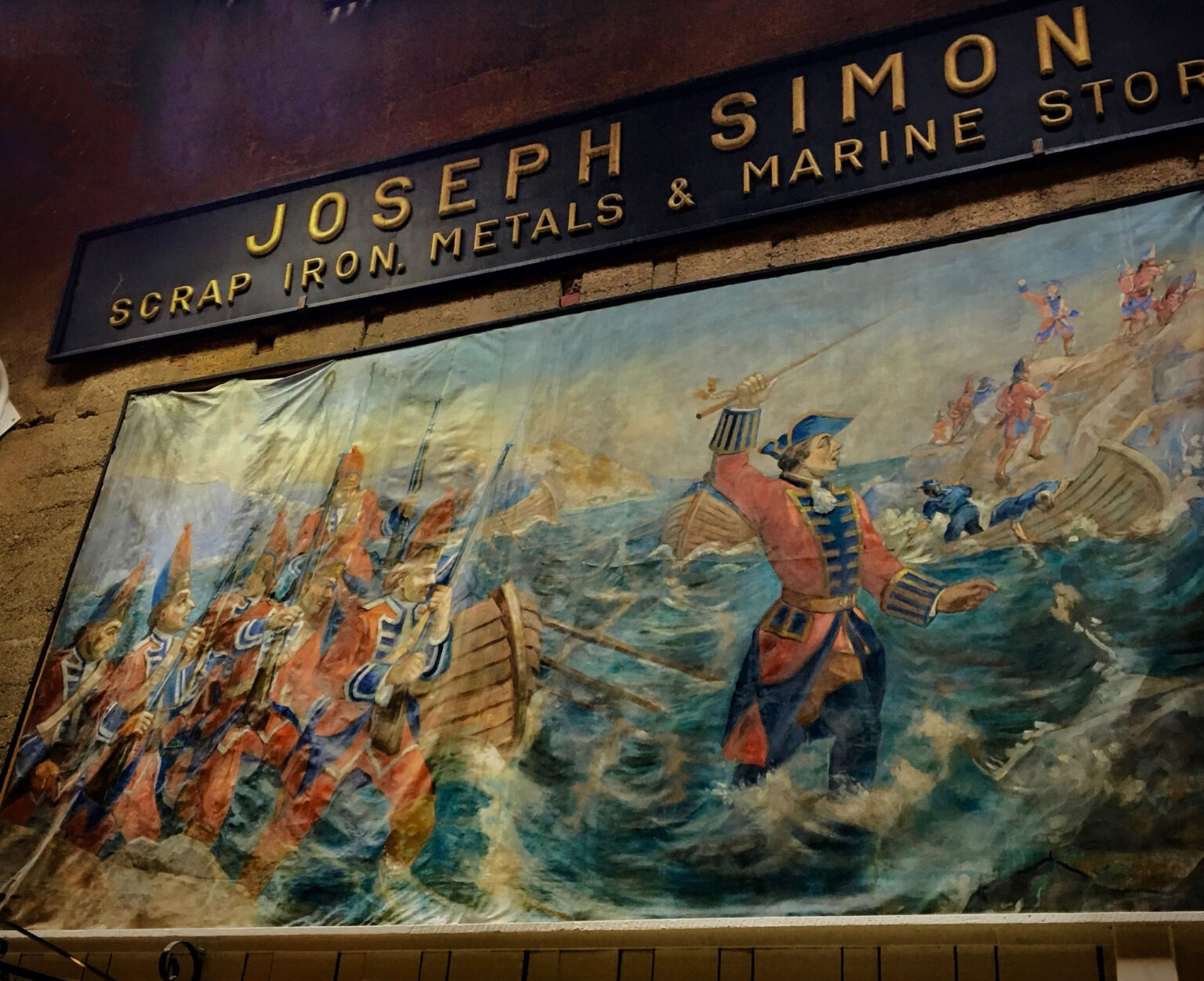 The founding of Halifax mural is conveniently located next to public washrooms on the ground floor of the Public Archives. 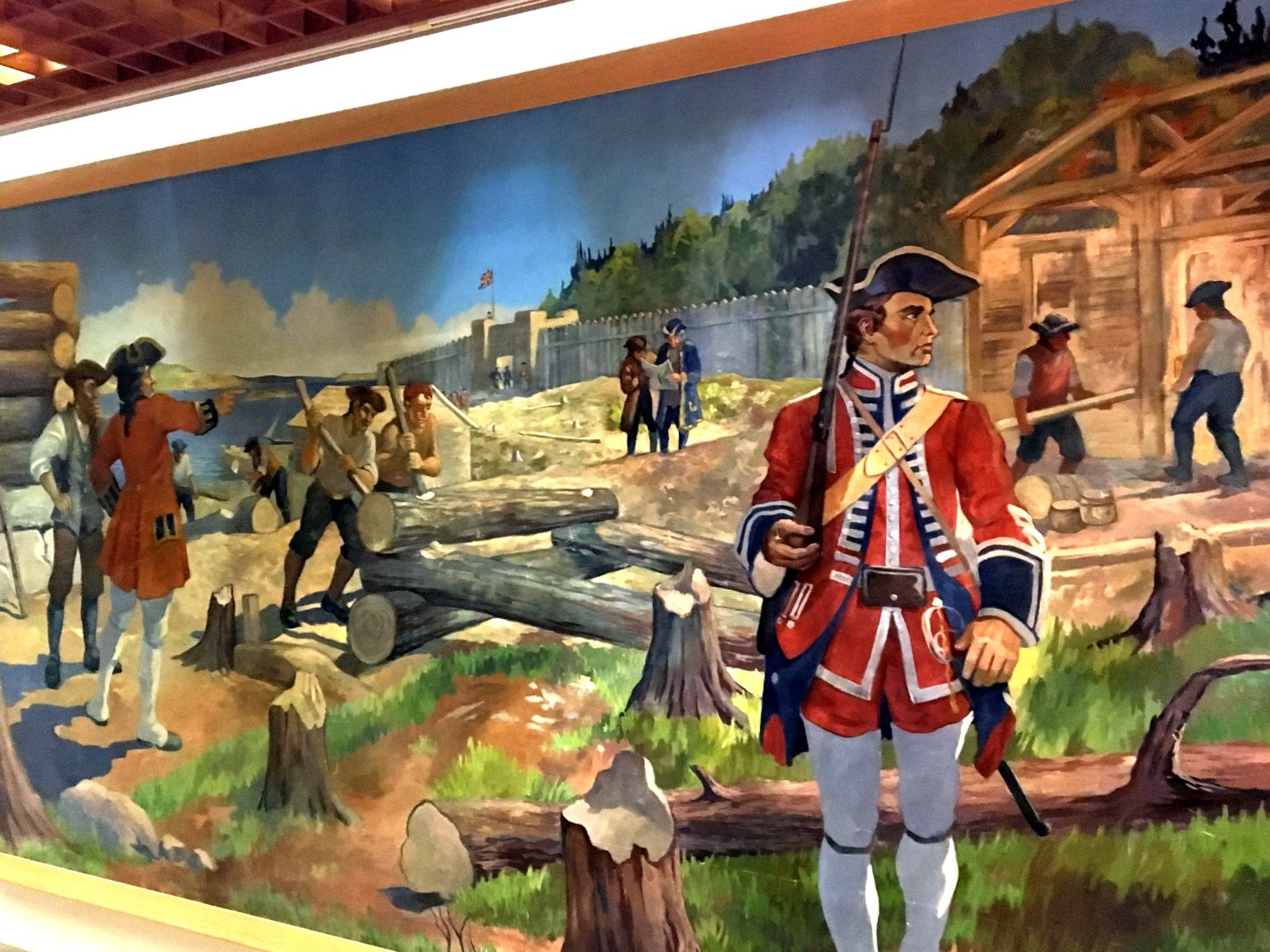 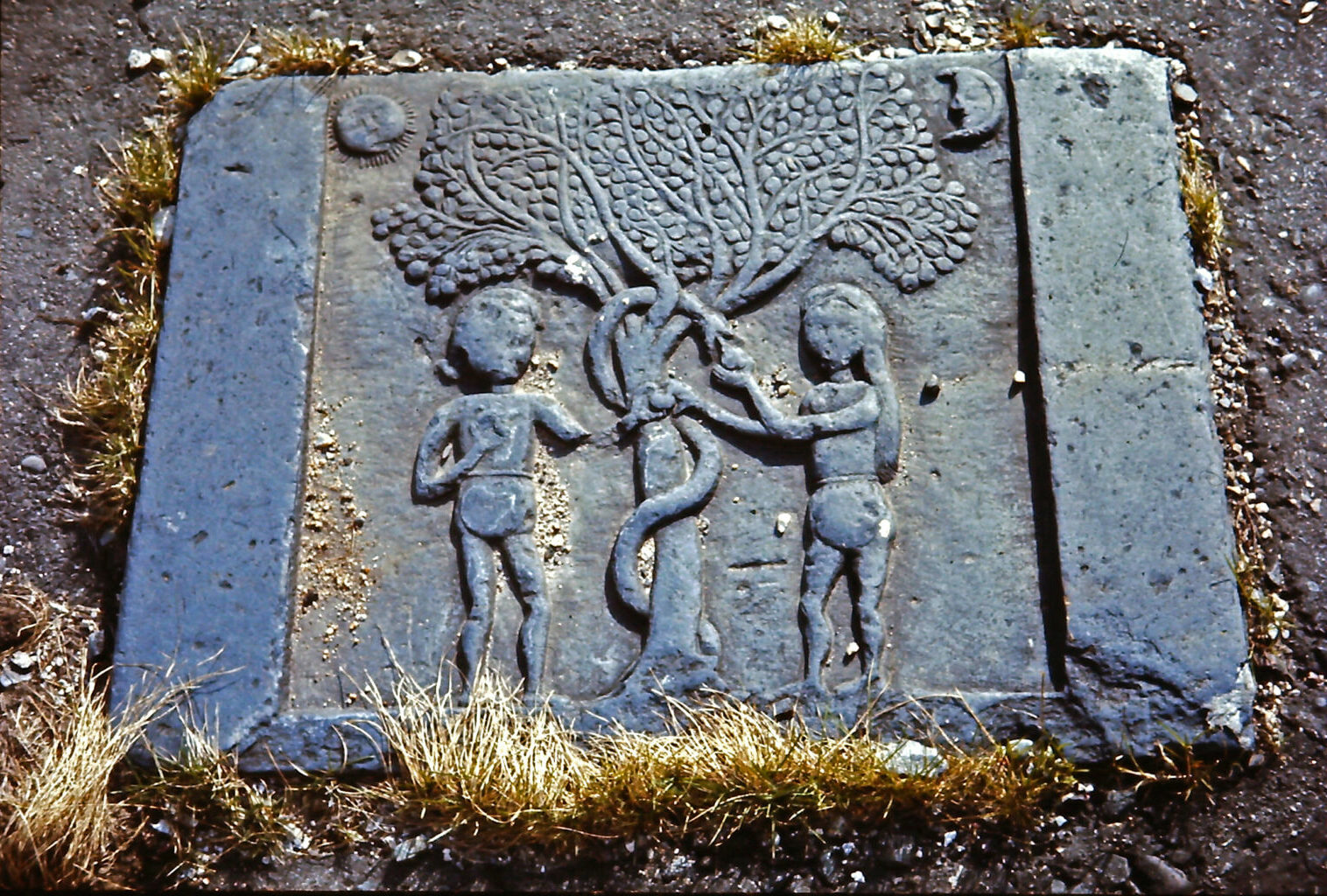