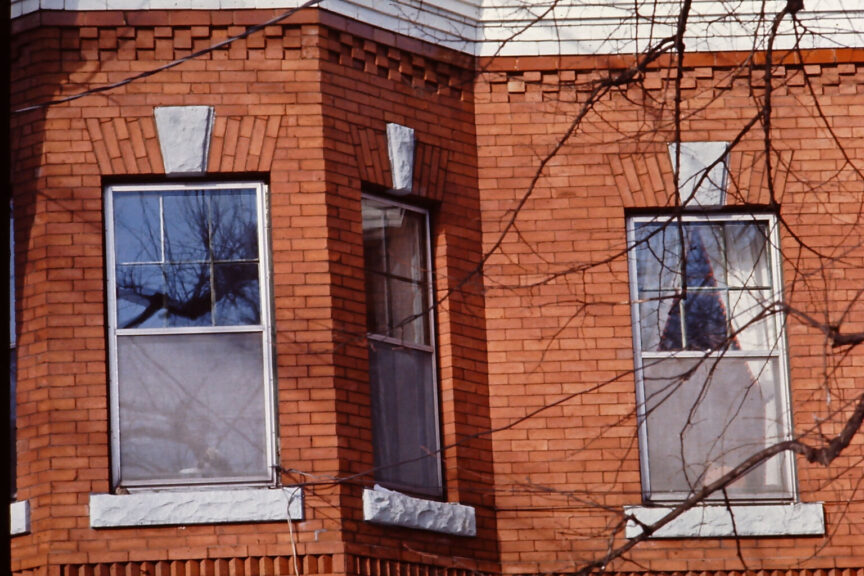 This is the twelfth album selected from my little collection of photos. These images are architectural details around Halifax photographed in the 1970s and early 80s and are arranged generally by the age of the objects.

When I rambled downtown Halifax in the 1970s and 80s the photos I took were often of architectural details, especially of decorative cast iron and masonry. Looking back now it would have been helpful to put more energy into recording whole buildings and street scenes.

The back of an 18th-century gravestone in St. Paul’s Cemetery is so alive to me. Every whack on the chisel left a mark and records a decision. Timeless. 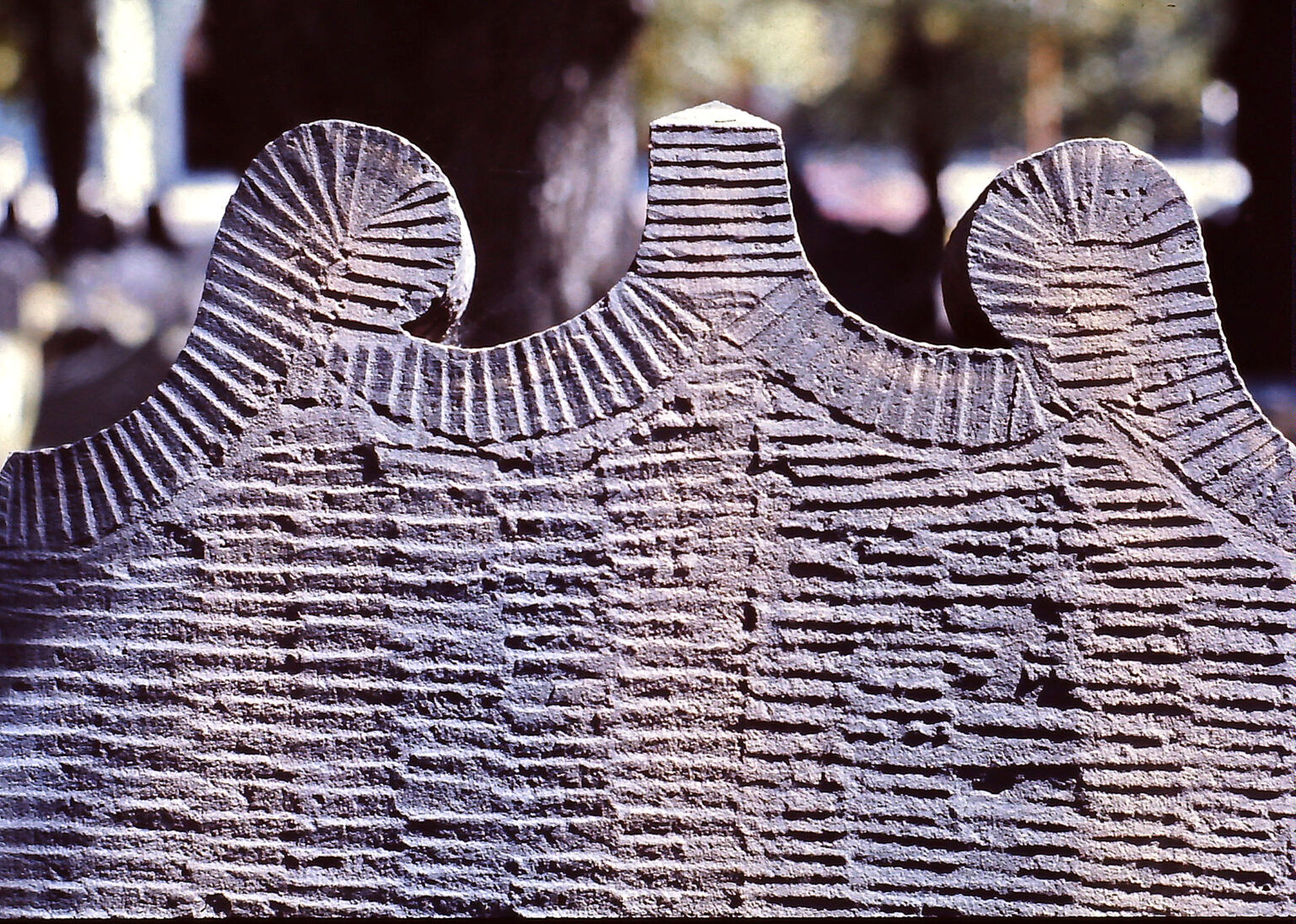 When my understanding of ironwork was just beginning to develop, it was exciting to discover the fence around the legislature was the oldest in the province and also made by the foremost ironworks in Scotland. This little head and swag at the Hollis Street entrance of Province House would be perfectly at home in the Georgian districts of Edinburgh. 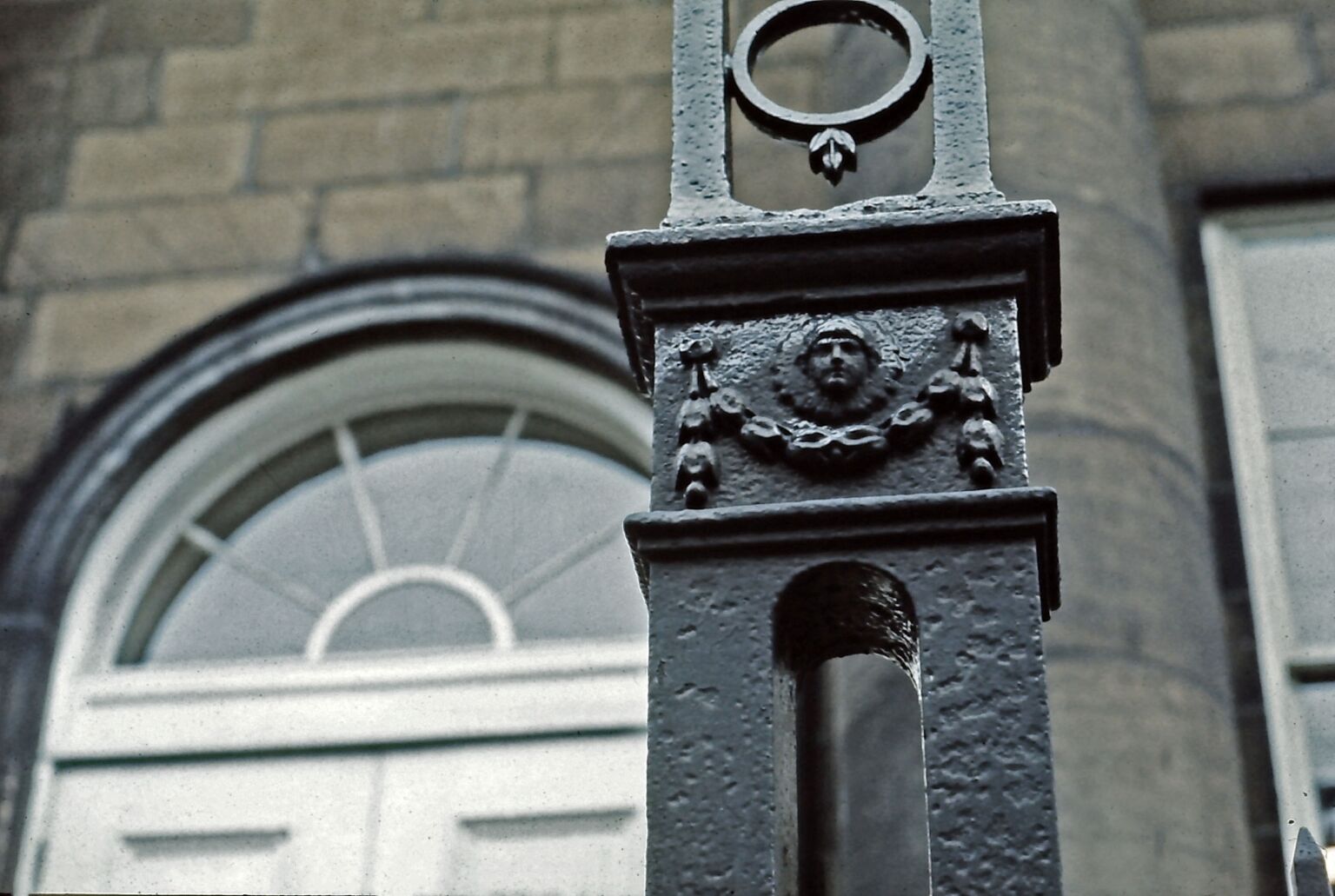 I have quite a little collection of lions photographed around town. None is more refined than buddy on the Halifax Club (early 1860s). Today I can’t stop looking at the crisp window opening and precise stonework. Stone cutters and designers who knew what they were doing. 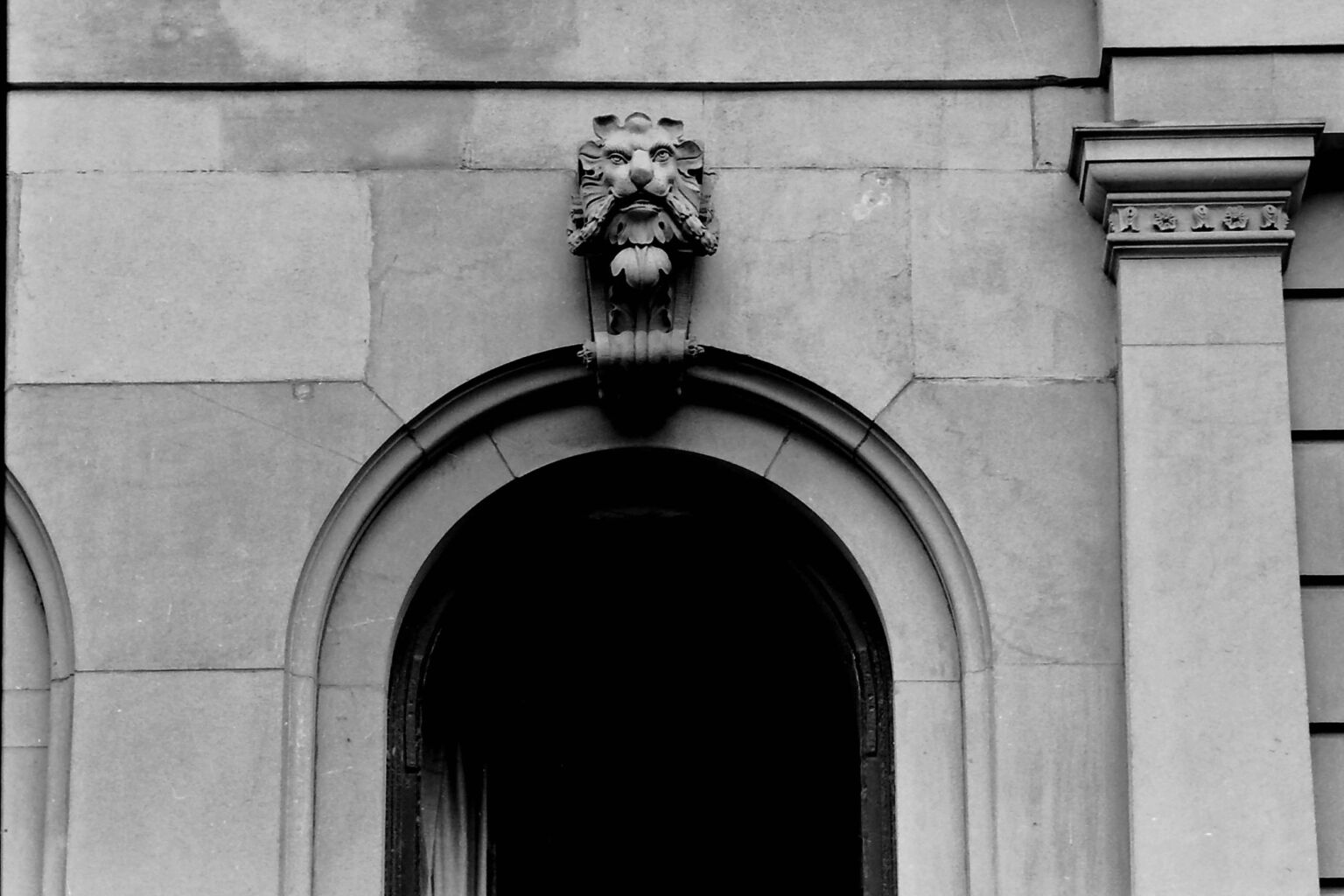 On Granville Street another lion, also from about 1860, is in a perpetual cast iron roar. Here the story is about deferred maintenance and abandonment, strategies that Halifax embraced at the time. 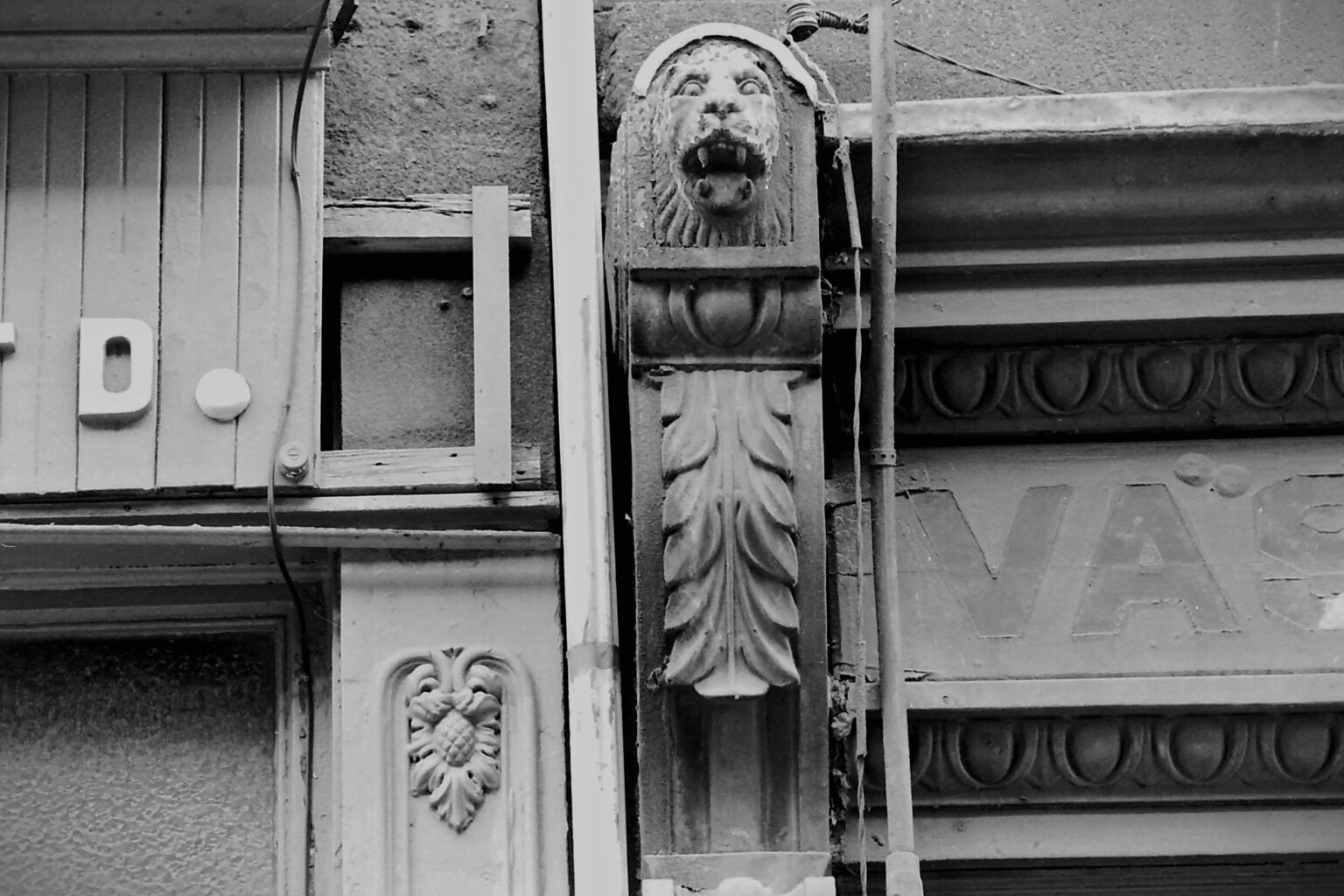 These days my little hits of endorphin come when a tweet gets likes; the 1970s equivalent for me was discovering a new piece of ironwork, like this column and capital on a Hollis Street shop front. Most recently this location was the home of the restaurant with the best ever name, Beaver Sailor. 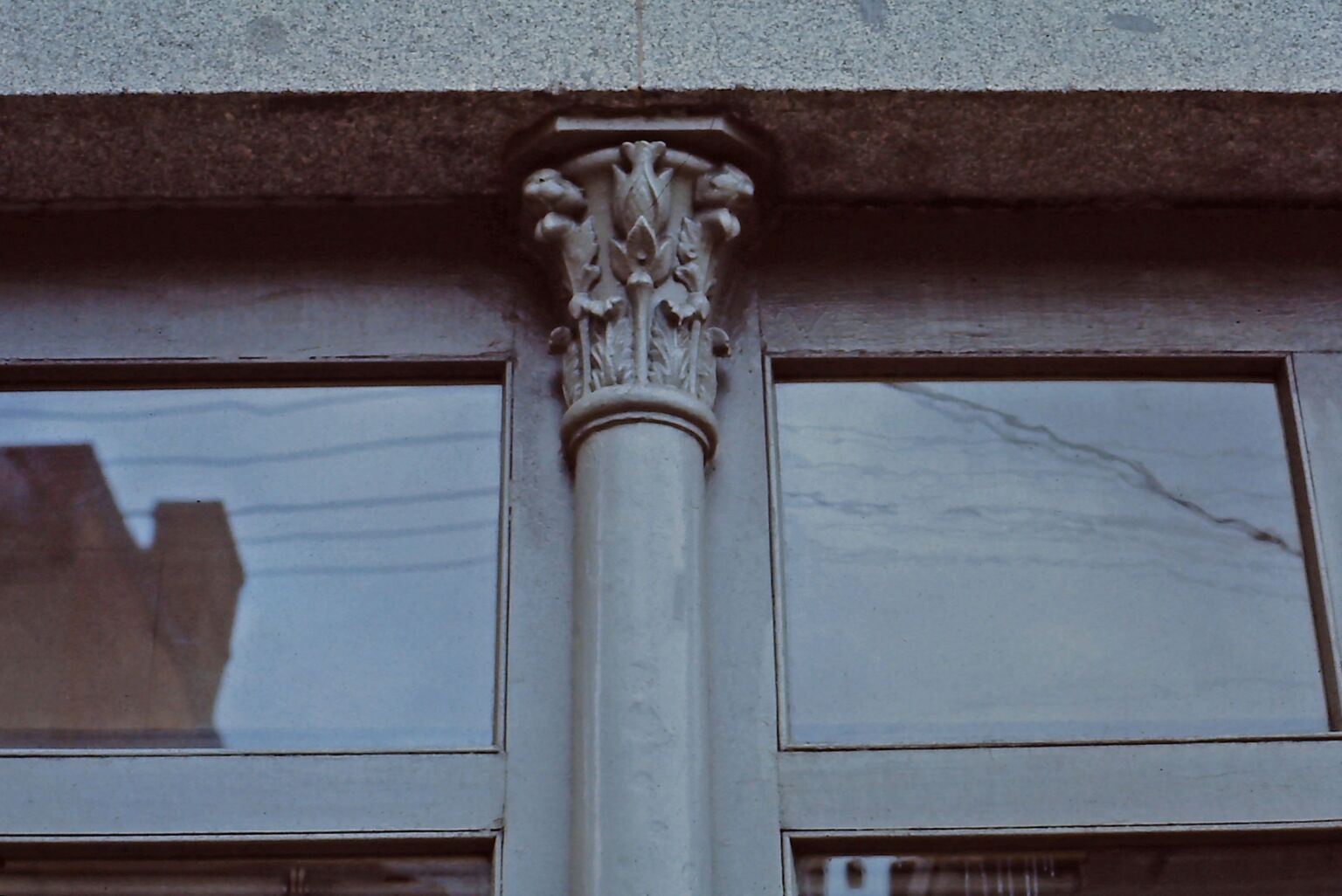 This Italianate-style storm porch on South Street is one of the best examples of that favourite Halifax architectural feature. When I took the photo in 1974 I would not have been able to name those things, but I did know pretty when I saw it. 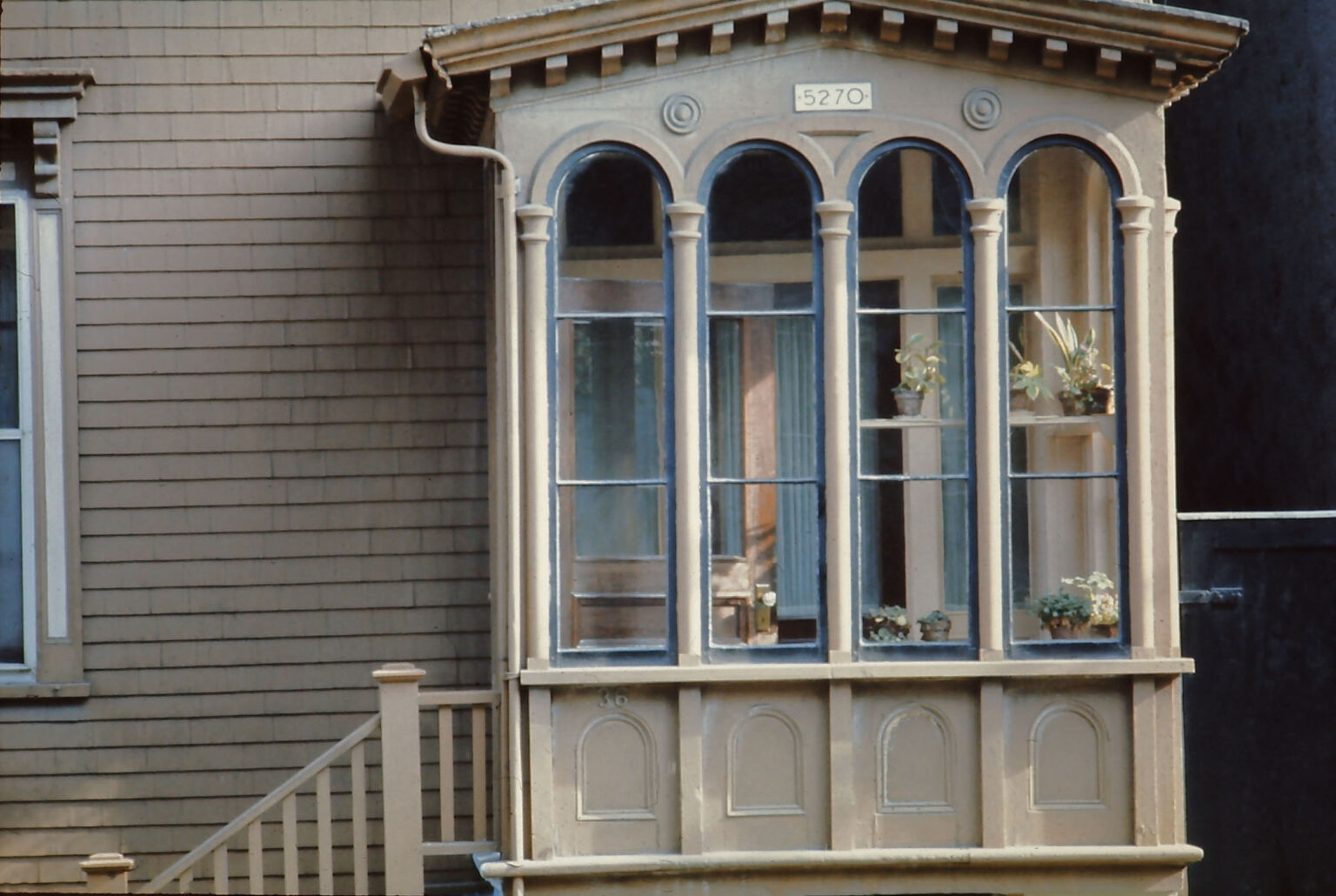 A masonry storm porch on Tobin Street was a surprise discovery in 1974 and is still a delight today. 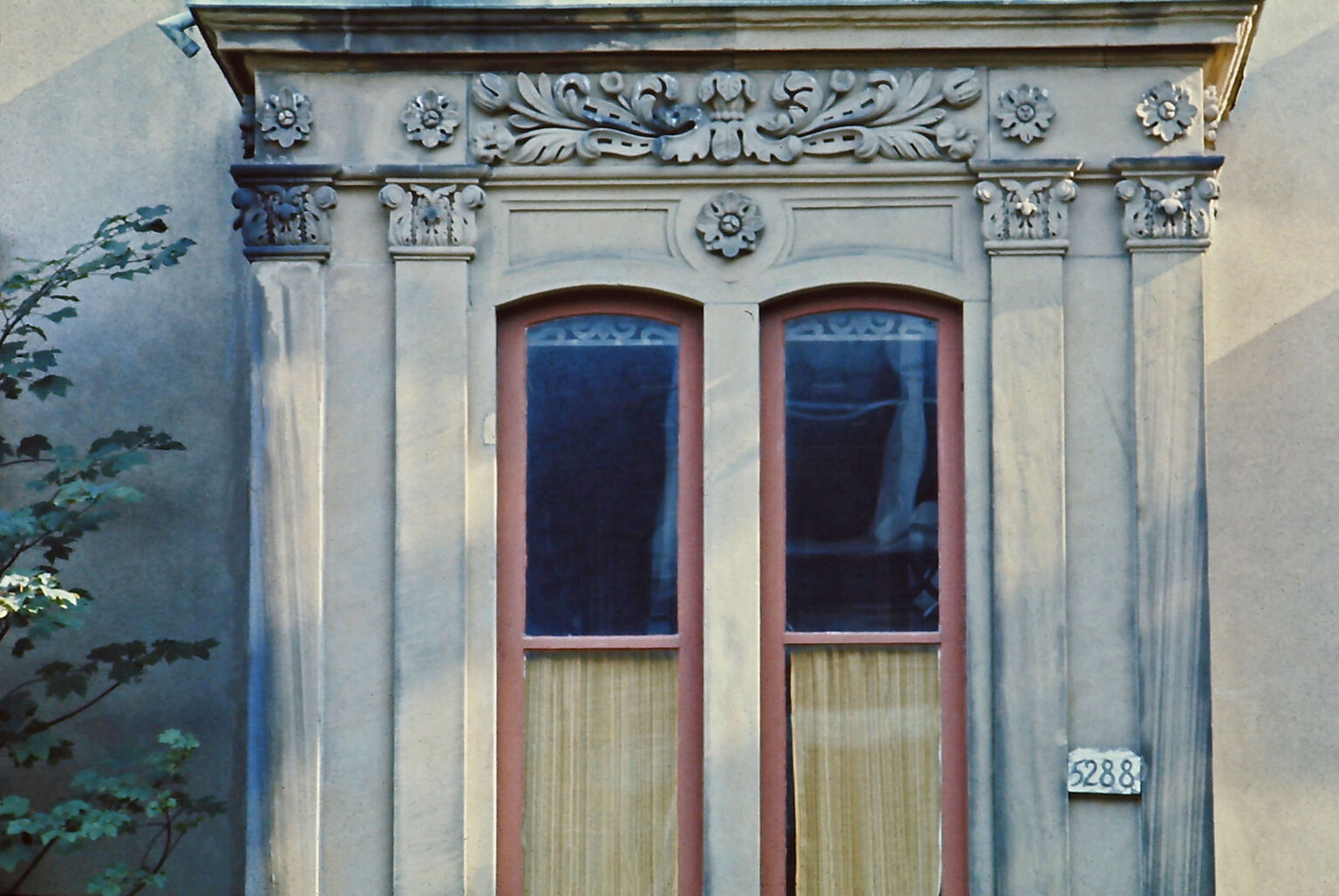 Mason’s marks are something you read about but don’t often see, particularly around here. This one is on a side wall of the  Henry House on Barrington Street. The mark perhaps identified the worker who cut that stone so he could get paid. The only other local mason’s marks I’m aware of are on the stone wall in front of St. James United on Portland Street, in Dartmouth. 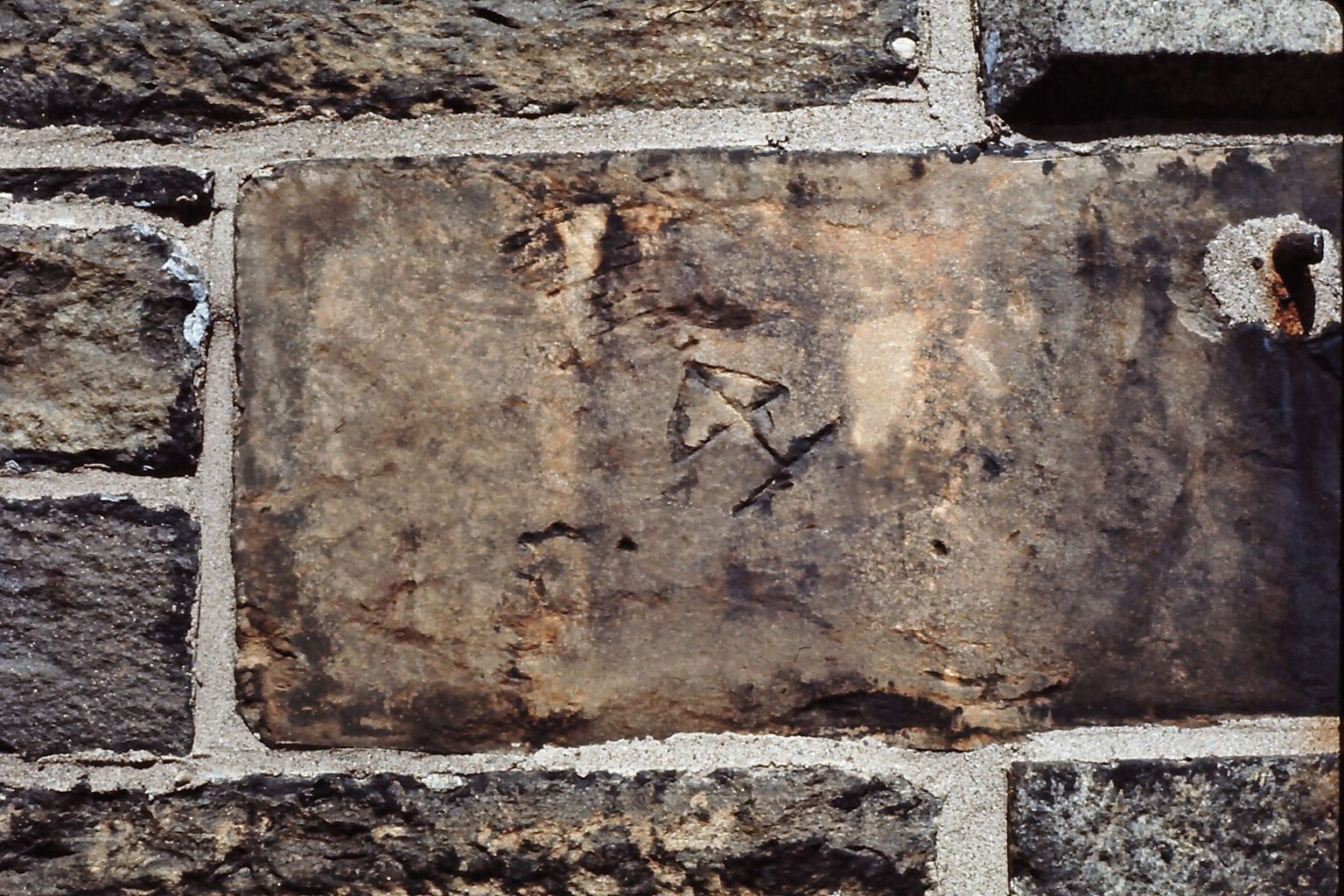 This detail of the old Post Office (1868) was taken to show how granite and sandstone (our best local building stones) were used together. It would still be some years before the building was cleaned of coal soot and pigeon poop and became the Art Gallery of Nova Scotia. 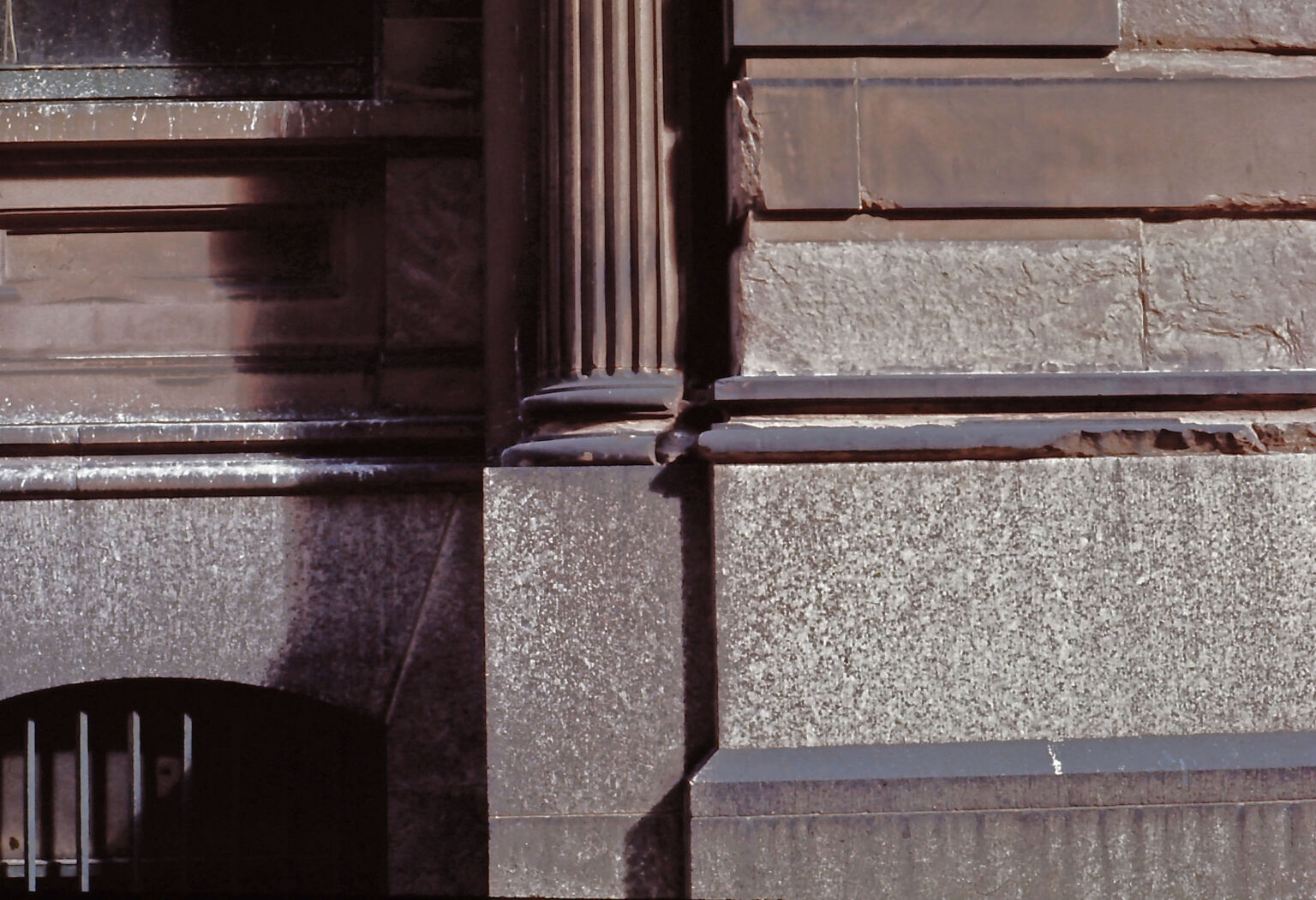 I seemed to like taking photos straight up the facades of Victorian buildings. This point of view wouldn’t occur to me today but it was a good way to showcase the bands of decorative brickwork. 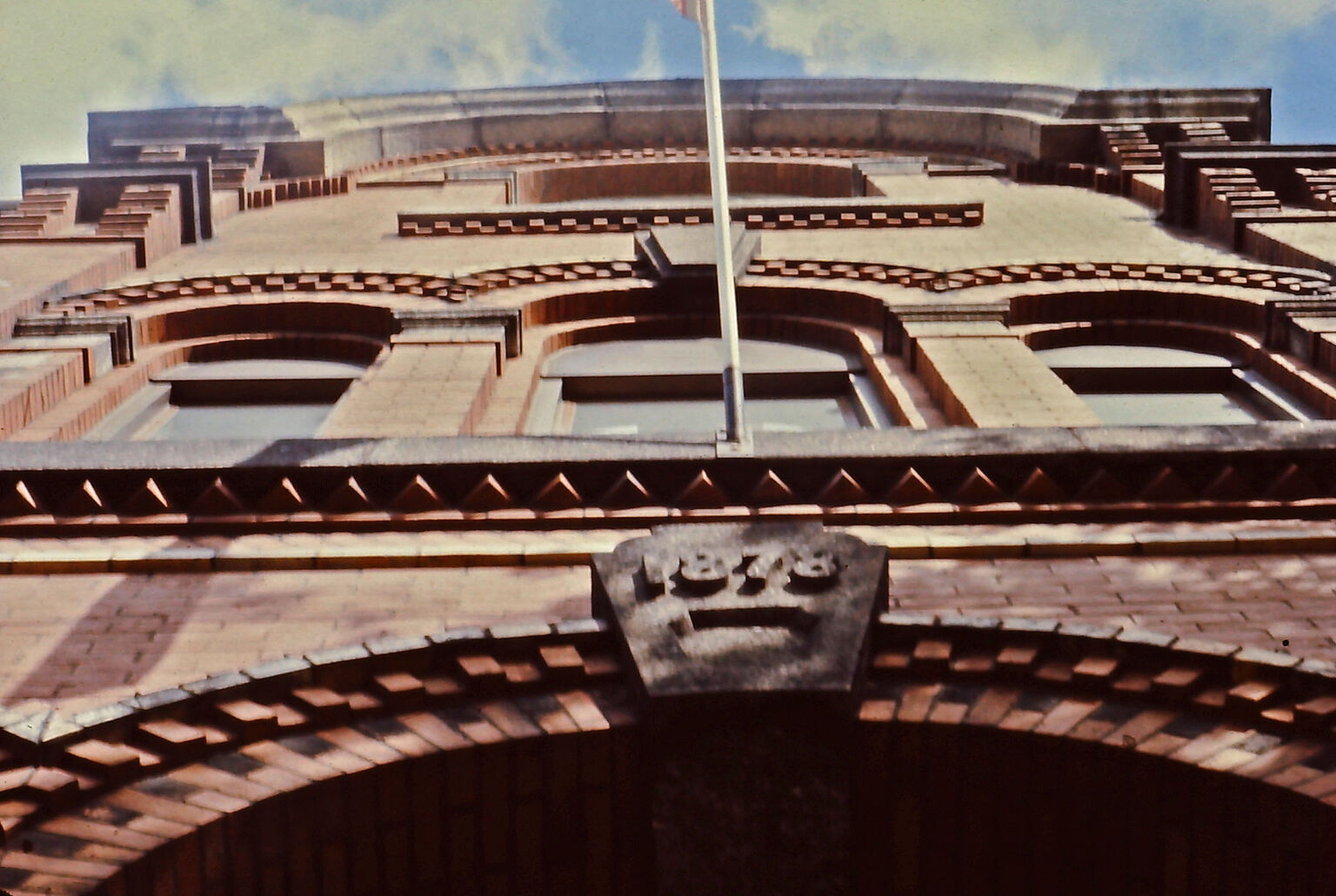 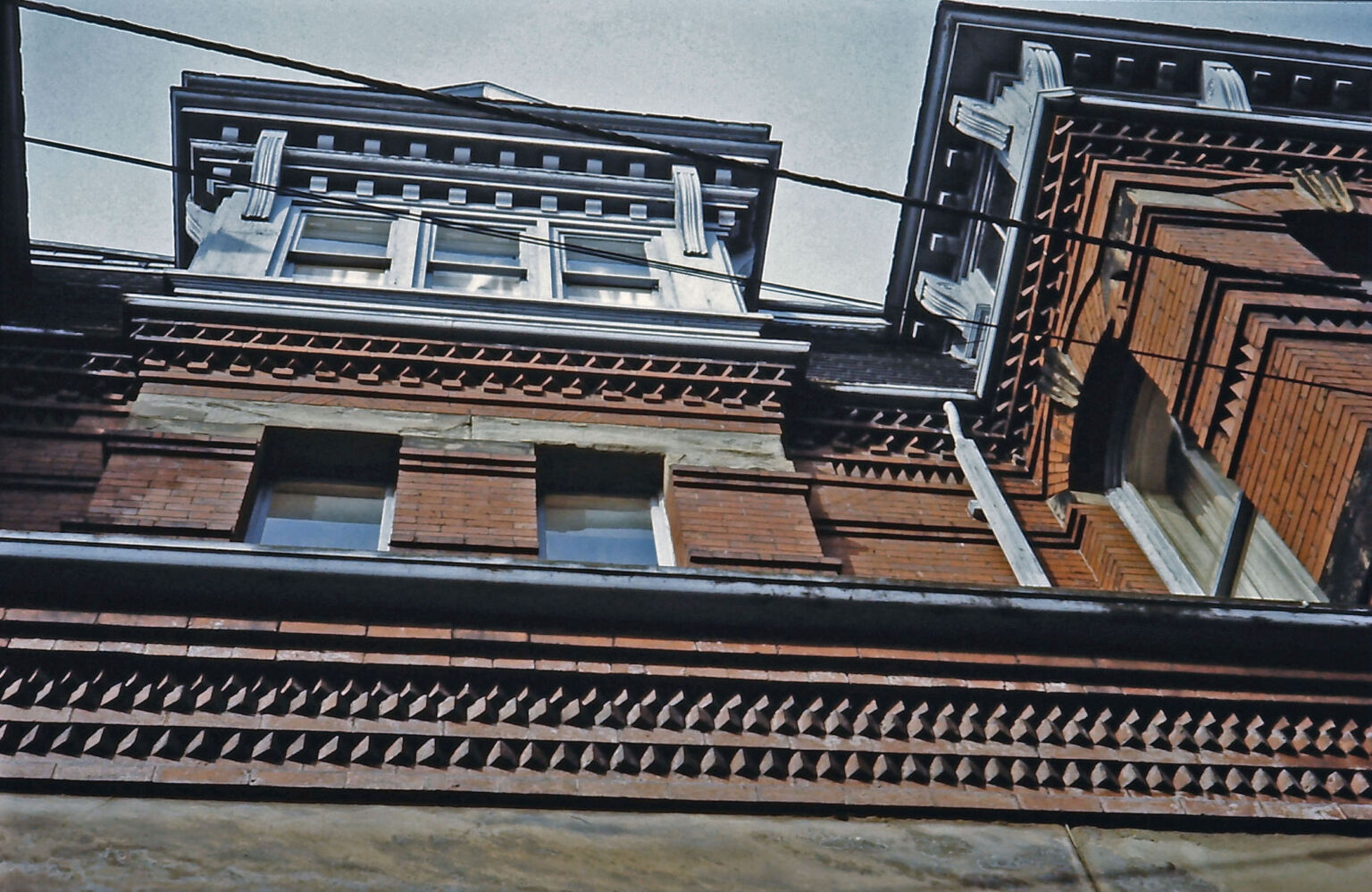 Between the City Club (above) and what is now known as the Khyber building was a wooden gate with long strap hinges. Not what you’d expect to find on Barrington Street, and made a useful bulletin board. That alley always accumulated rubbish, and although much changed today it still appears to be difficult to maintain. 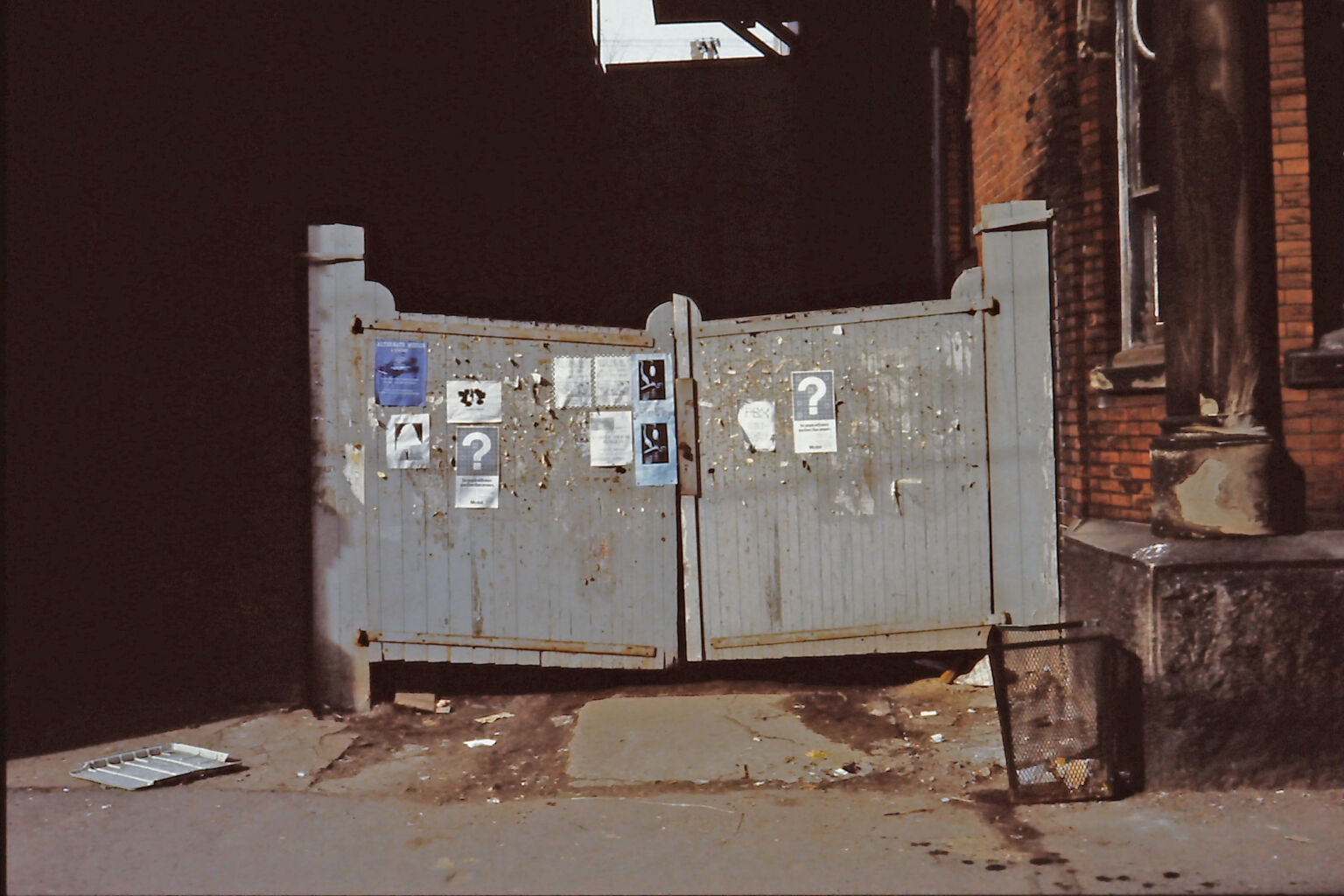 The etched glass in this door would have attracted my attention because I was interested in all manufactured decorative elements on older buildings. The house was on Dresden Row, more or less where the entrance to Pete’s is today. 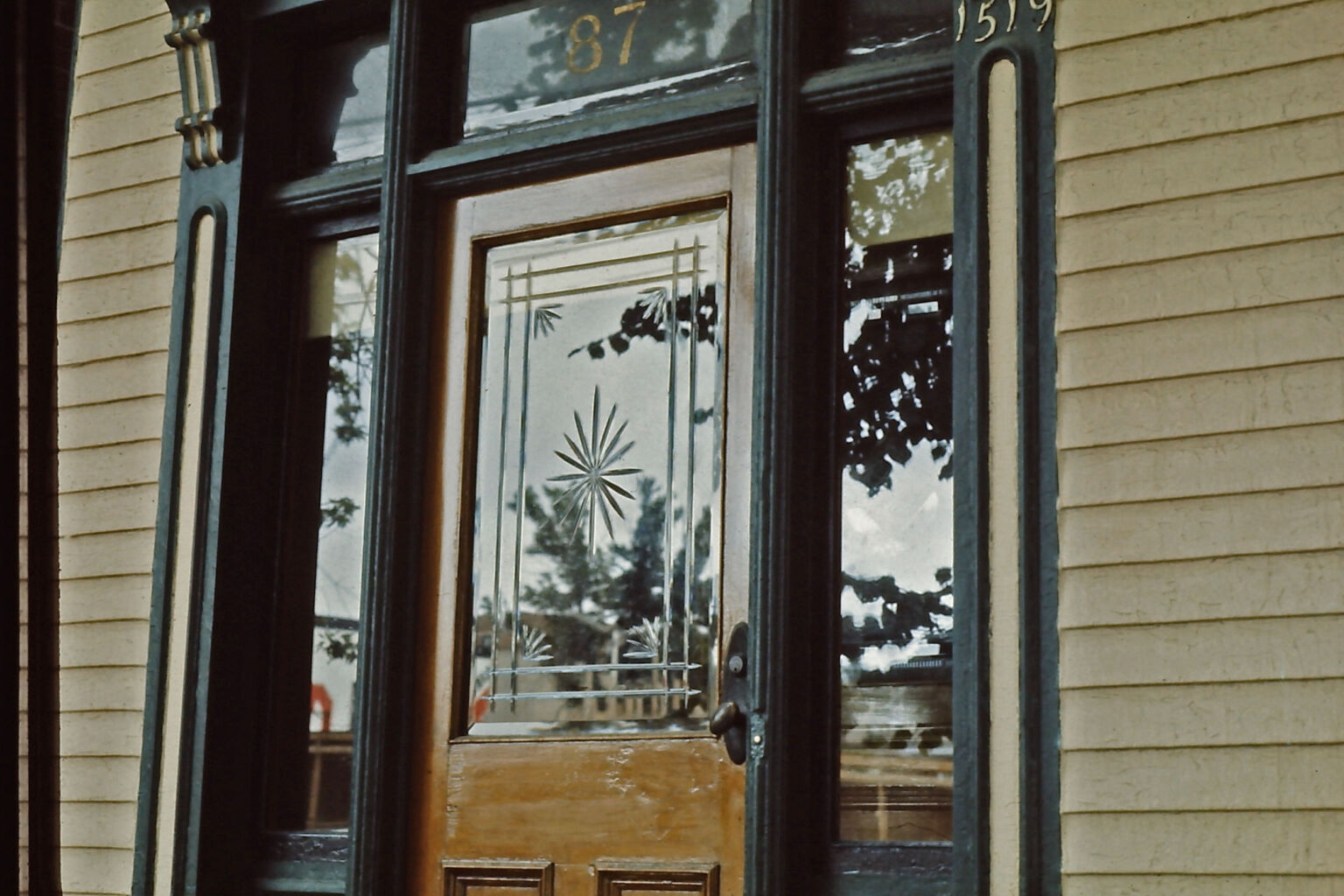 A beautiful sign in a window of the Morse’s Tea building. Through the window is a glimpse of tea canisters on shelves. 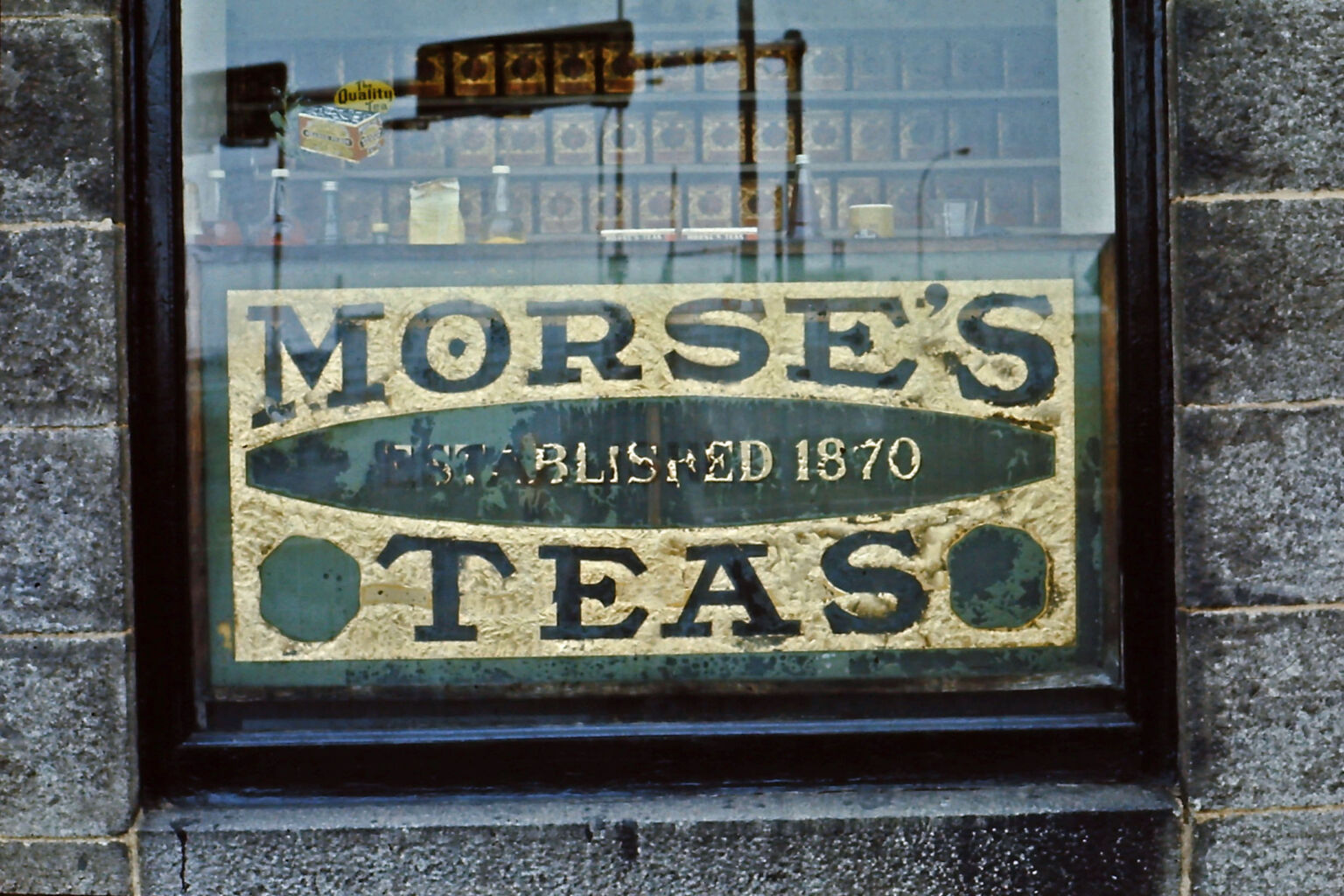 Before there were books or websites about Halifax architecture, date stones on buildings were particularly helpful. How else would I learn that St. Mary’s Boys’ School on Grafton was one year younger that the Bell building on Granville Street? 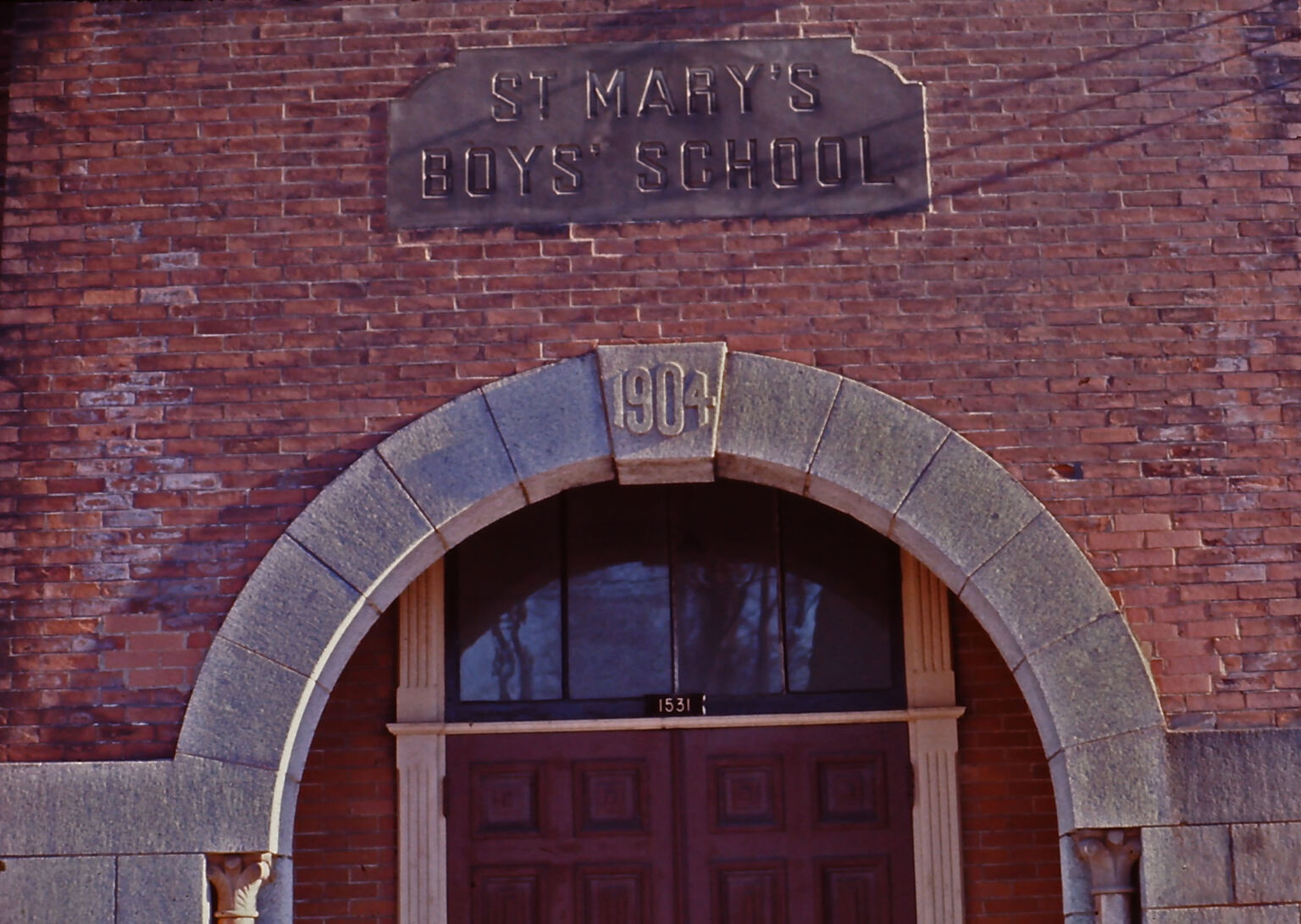 The  Bell building  is one of the earliest concrete buildings in Halifax. A fire left it an empty shell for decades, until NSCAD filled the interior with amenities like the Bell Auditorium. 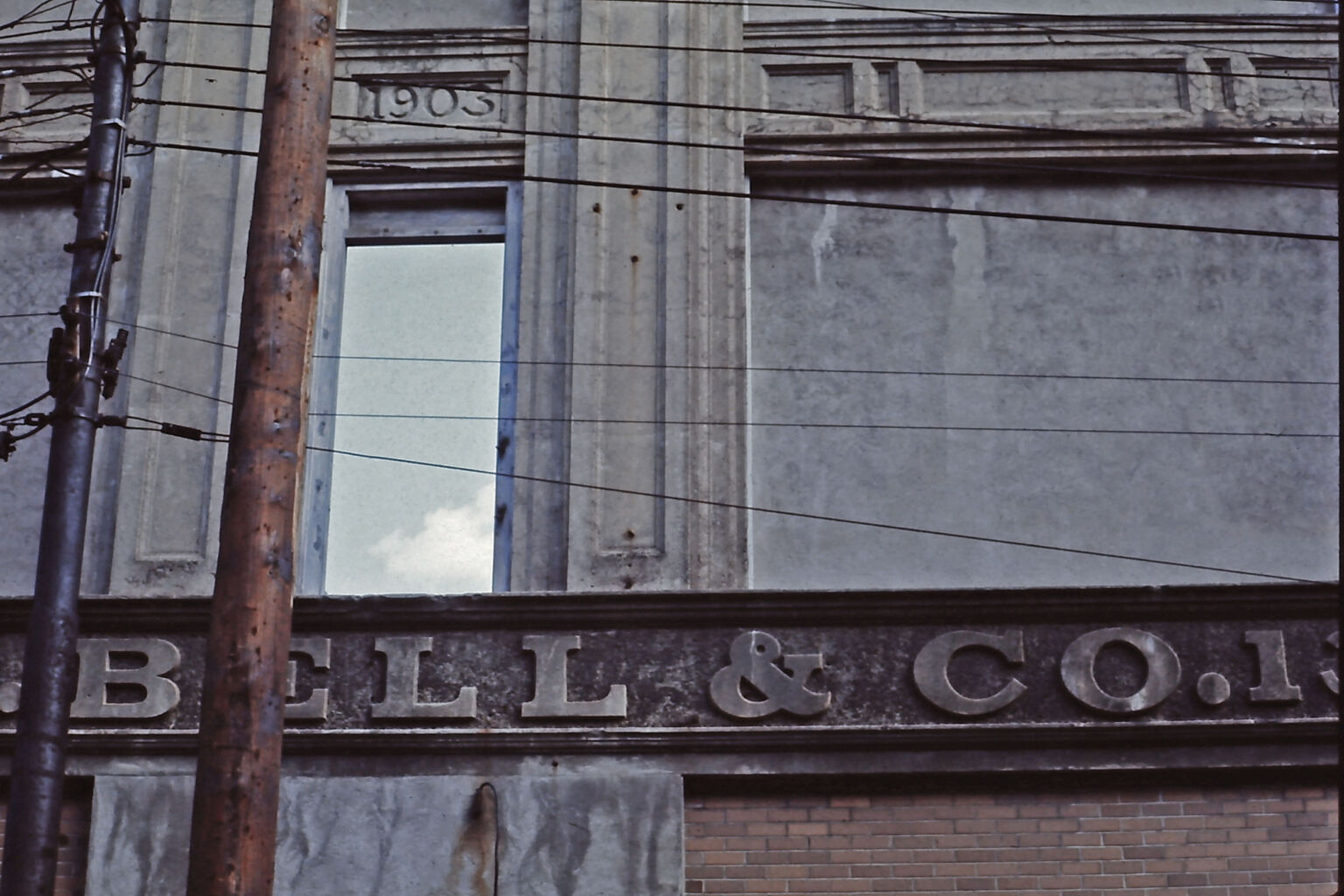 That’s a real cloud, there was nothing behind the façade for decades. Photo 1976

These brick row houses on Jubilee Road are unique in Halifax. The frieze of white glazed brick caught my attention. 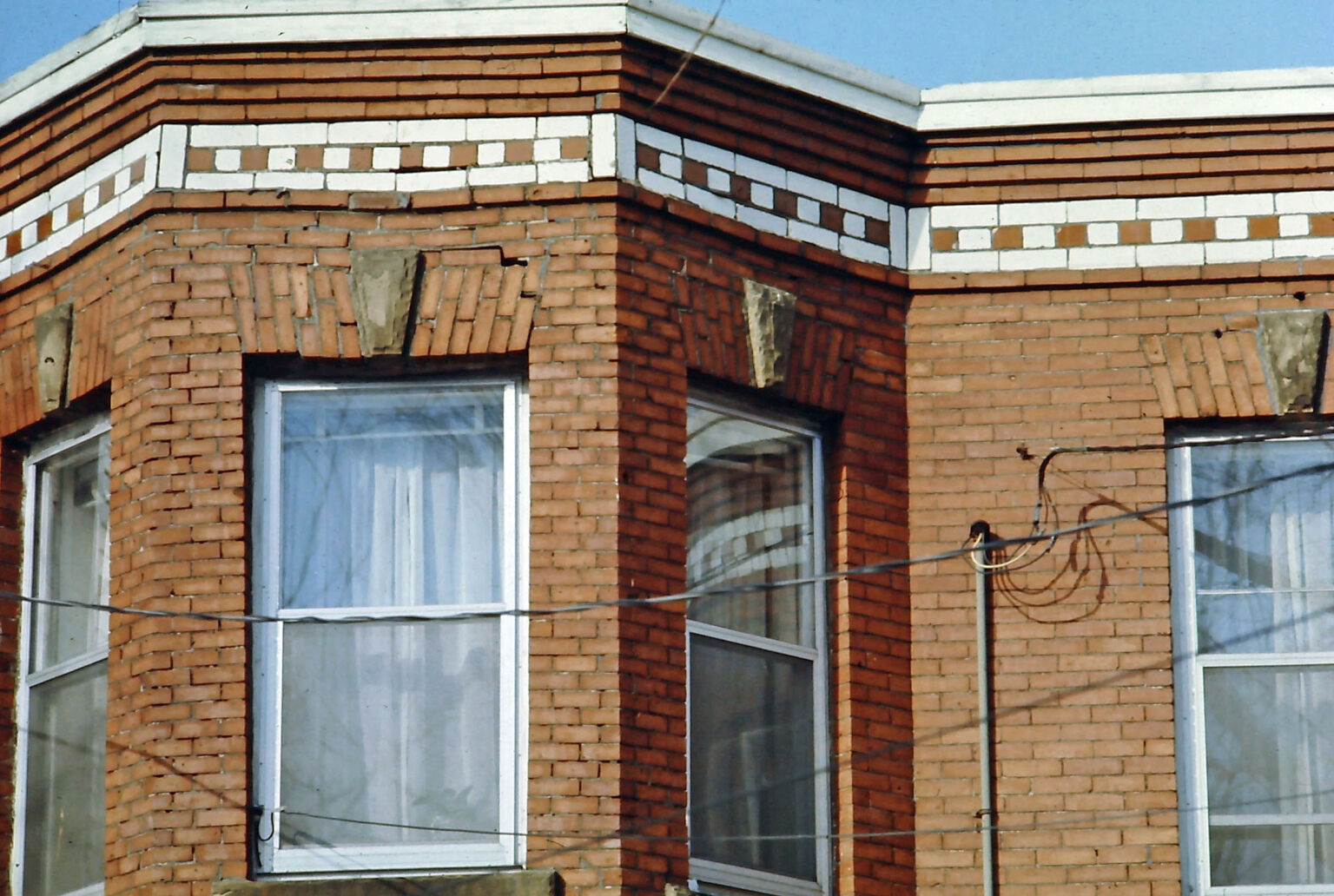 The 1931 Bank of Nova Scotia is a wonderland of decorative details, they go on and on. 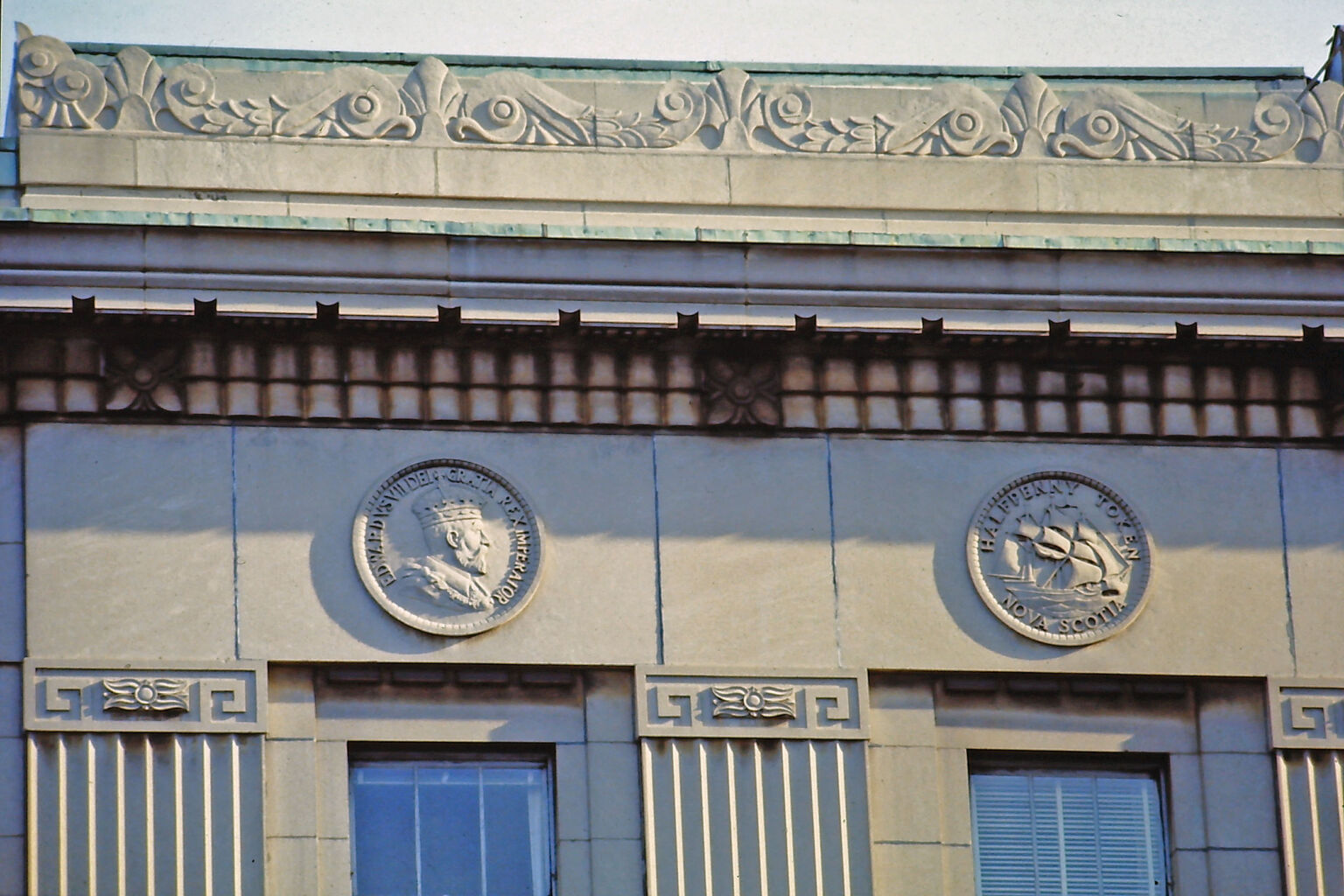 The Dominion Building, next door to the bank, is also a treasure trove of details starting with nautical-themed grills in the basement windows. 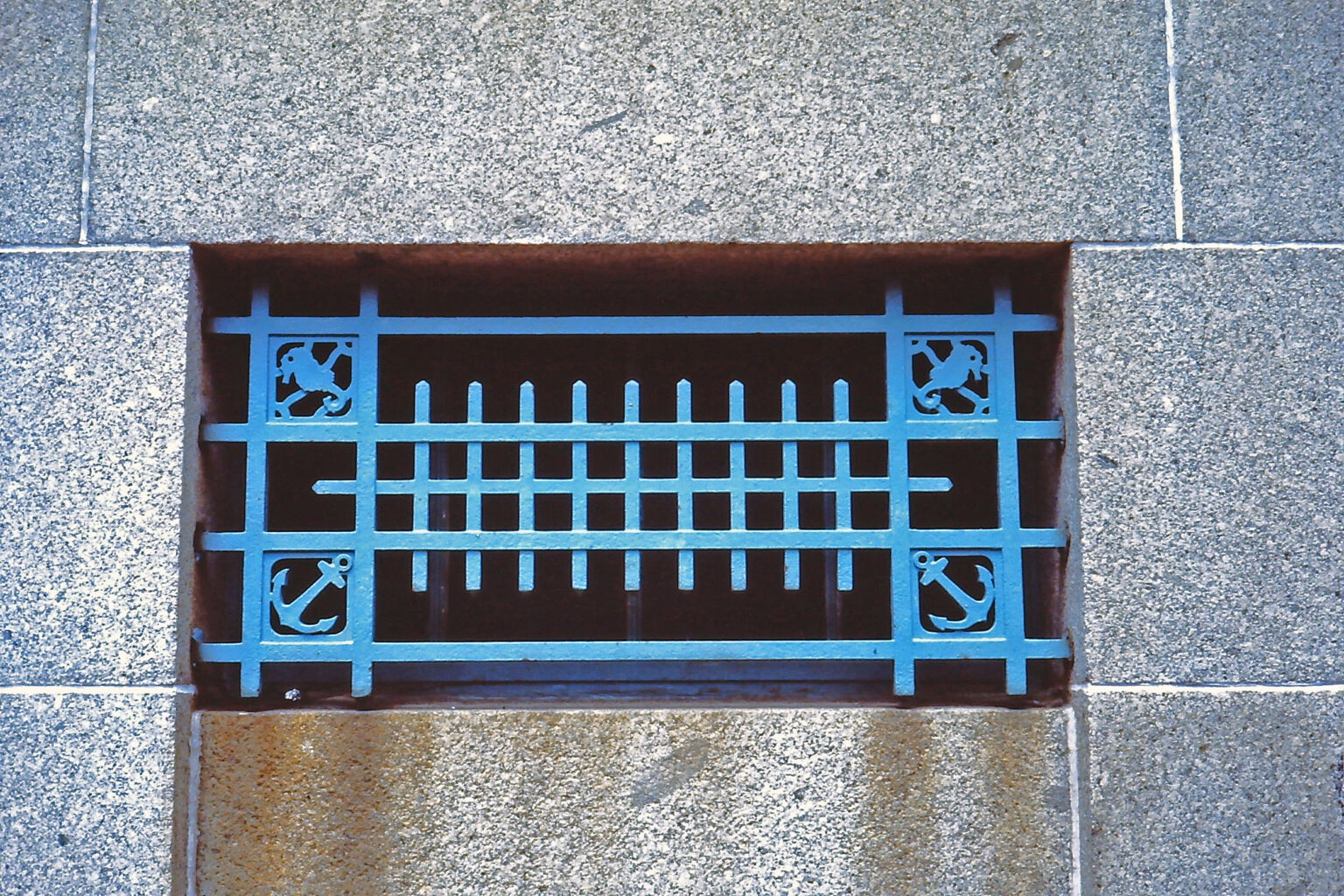 Most of the details highlighted in this post have survived, they are just 40 or 50 years older. You probably know many of them already, but seeing things in real life is always rewarding so get out there and add to your own detail  collection.

These days I’m apt to snap some detail pictures of structures that were too new in the 1970s for me to understood or appreciate. For example, many of the big buildings of the 60s and 70s were “decorated” with textures cast into the concrete of their walls. Someday I’ll get more serious about recording this vocabulary, like the bands on the much despised Law Courts on Water Street. Hmmm, they sort of remind me of the chisel marks made by the 18th-century stone carver that started this post. 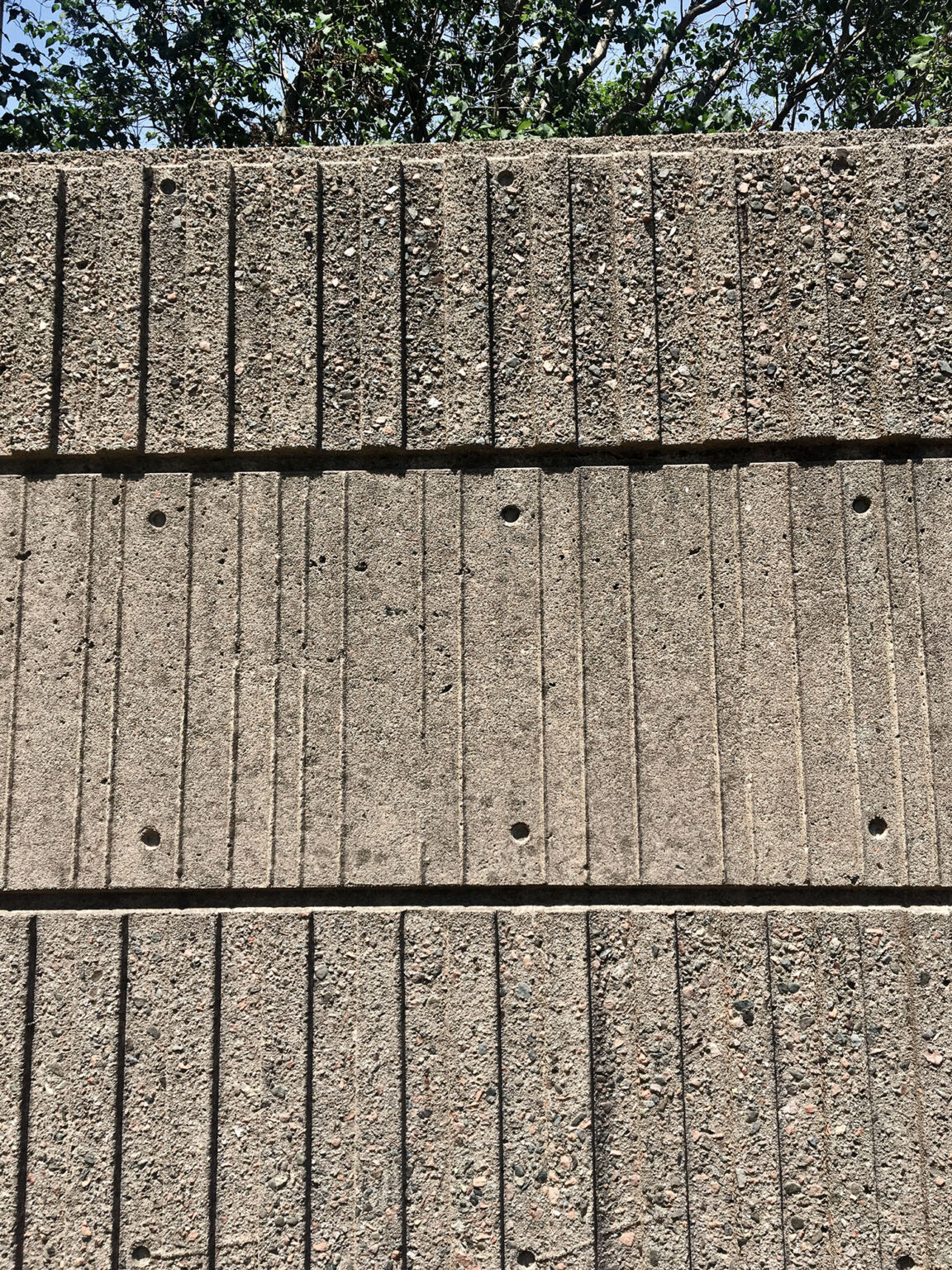