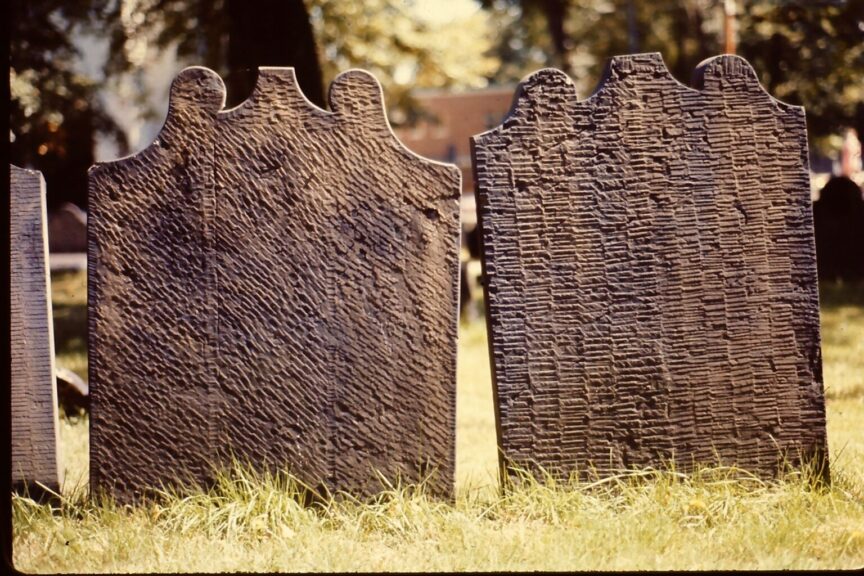 Recently on Twitter I posted some photos of the backs of 18th-century gravestones in St. Paul’s Cemetery in Halifax. The photos were taken in 1977 when I happened to visit the old burying ground at a moment when bright sunlight accentuated the patterns of tool marks created by the stone carvers. To my surprise over 100 people “liked” the post and it received 15,000 impressions. I’m unaccustomed to this much attention, so I decided to look back over the last year to see what other Twitter posts had peaked people’s interest.

We spend a lot of time looking out our windows or rambling in the garden so photos of those views are regular posts, particularly during the pandemic lockdowns. This bedroom window panorama didn’t require any exclamation. 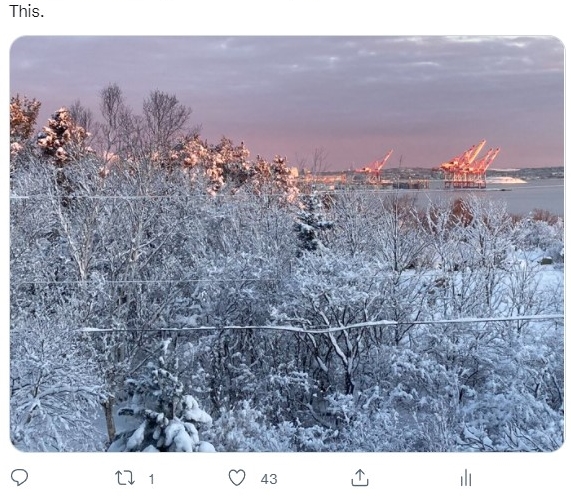 At the beginning of the pandemic I started posting “garden report” photos, often taken while I wandered our lot looking for deer and their damage (before we installed a fence). 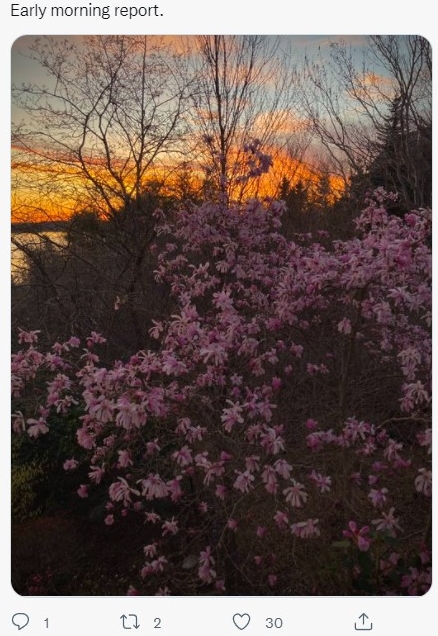 A loyal, little following of Twitter users seemed to enjoy these reports which encouraged me to pause and look at our surroundings more closely. 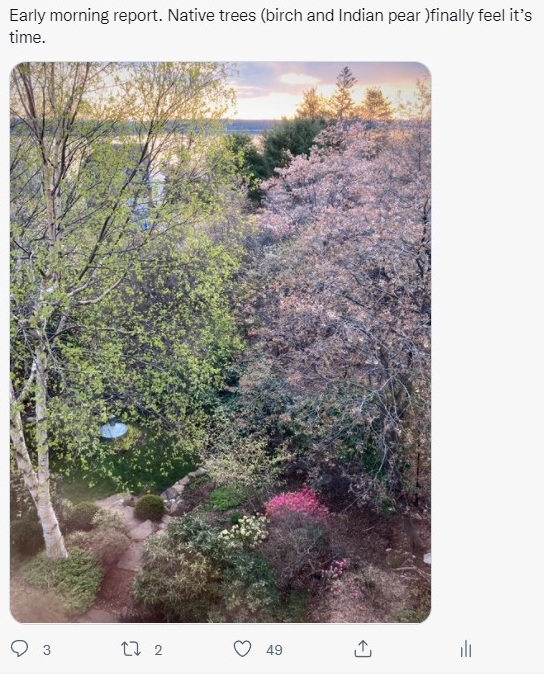 My sense is that landscape views of the garden interest folks most but sometimes a plant portrait demands to be taken. Turns out that more people than usual wanted to know that the tree peony was blooming. 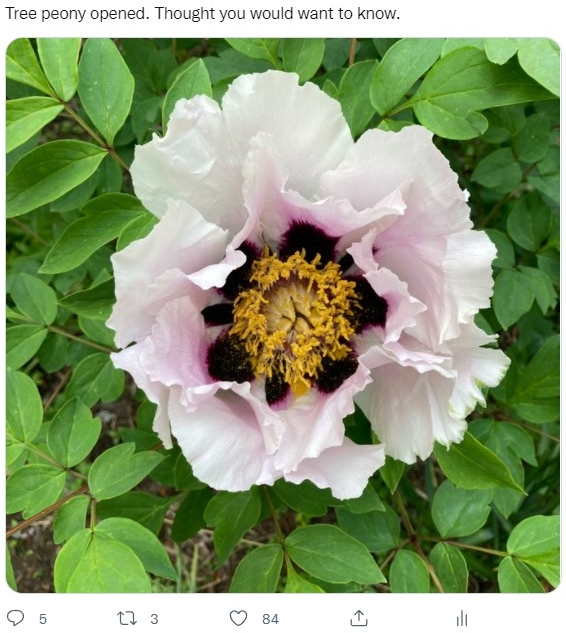 “Fist full of flowers” is also a regular theme that happens before predicted storms or frosts, when I quickly gather blooms that are not likely to survive the elements. 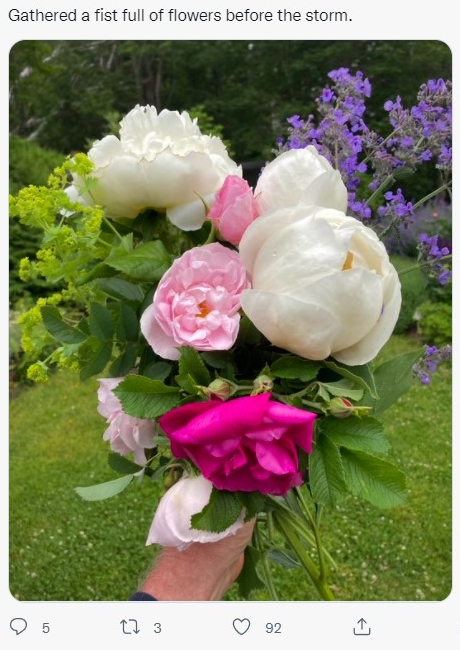 Our walks are generally in the neighbourhood. The museum interpreter in me likes a pretty picture that also tells a little story, plus a call to action. 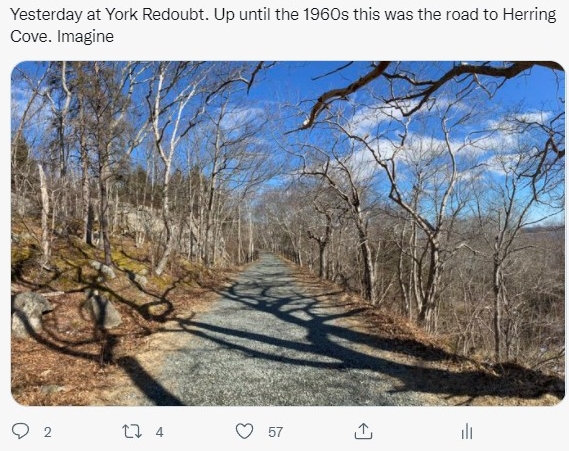 This perfect little house in Herring Cove is beautifully kept and appears to be used seasonally. I just pulled over and snapped a shot through the windshield. Turns out many other people have affection for the property. Not surprising. 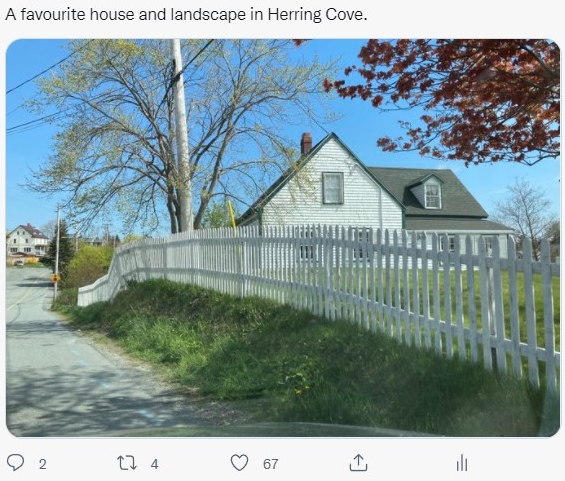 Sometimes I’ll see an interesting scene but only take the picture if I can compose a tweet in my mind. These building appeared to be having a dispute and over a hundred people agreed. 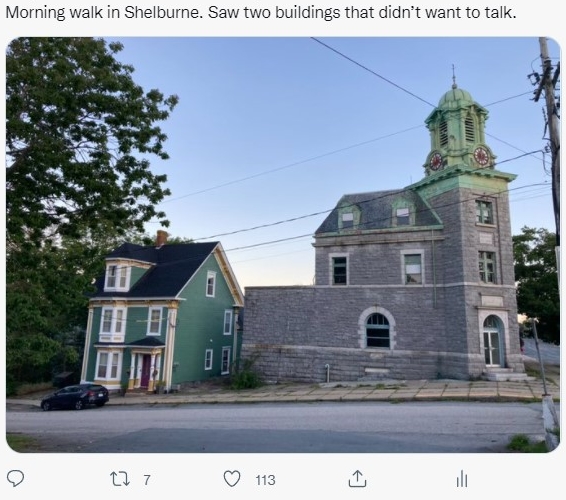 People living in Halifax in the 1970s remember the bulbous fiberglass bus shelters of the day. Early one Sunday morning I ventured over to the Transit Depot in Burnside where one of these odd structures is maintained as a smoking shelter. The tweet was written for people in the know. One respondent provided valuable firsthand knowledge: “I can actually smell this photo.” In some parts of town they doubled as urinals. 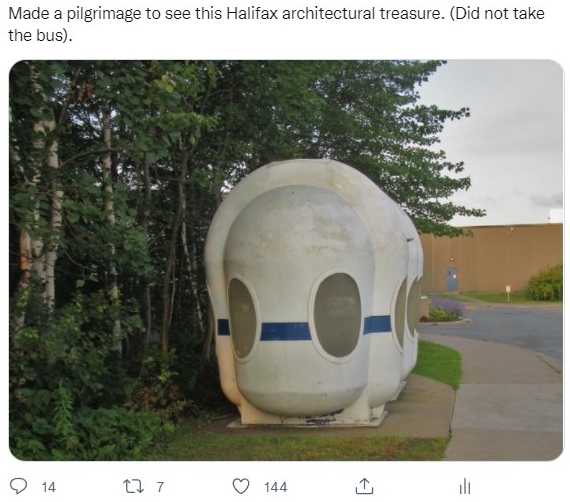 A dozen years ago, in my early days on Twitter, it was a treat to follow the lively food community. Stylist/photographer Kelly Neil was very generous telling stories about her food photography, and this helped improve my eye. There is a window in our kitchen that I know provides good light in spring/summer if I quickly want to snap a picture of the supper that Sheila has planned and I have sometime helped prepare. A smart aleck comment and our first asparagus galette of the season attracted 30,000 impressions and some complaints about earworms, from people of a certain age. . 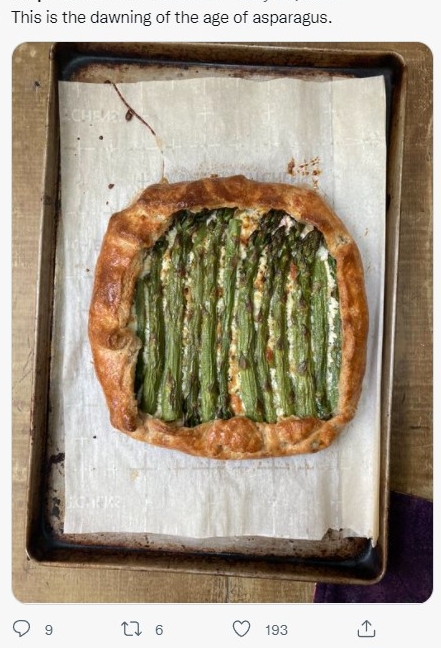 Driving down North Street on the way home from the dentist I couldn’t believe my eyes. I doubled back and got out to mourn a mature magnolia tree in full bloom that had been pulled out by its roots and was displayed in a construction site. The scene looked violent and crudely performative. A few months earlier the developer had been chastised for starting to demolish the building on this site while there was still a tenant living in one of the apartments. The magnolia display did not feel like a random act. I struggled with what tone to take with the tweet . 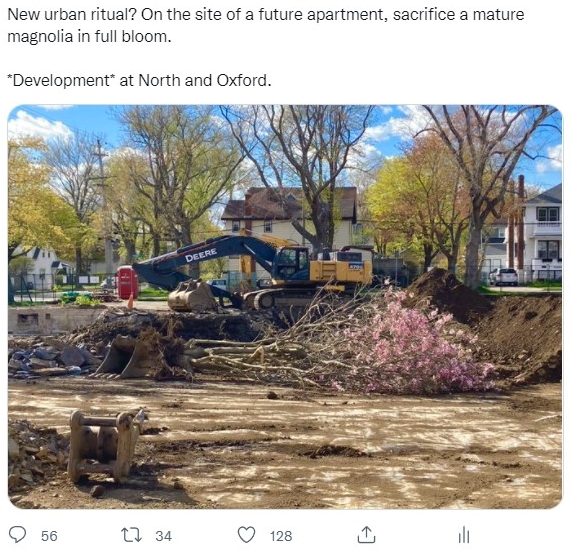 In July I made a special trip downtown to take photos of several buildings in early Sunday morning light. On Sackville Street near Barrington I walked past a hosta on the sidewalk without thinking about it, because my mind was on my photo project. Then the wrongness of this scene clicked in and I thought: you can do something about this, and went back and picked up the hosta and looked for its home. Plant vandals don’t have long attention spans so a hosta-sized hole was quickly discovered in a nearby planter and I reset the plant. Hostas are so tough this individual could probably have lived indefinitely just sitting on the sidewalk. People liked the story though. 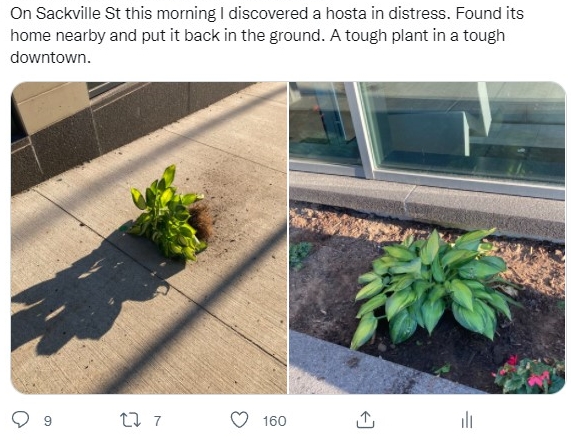 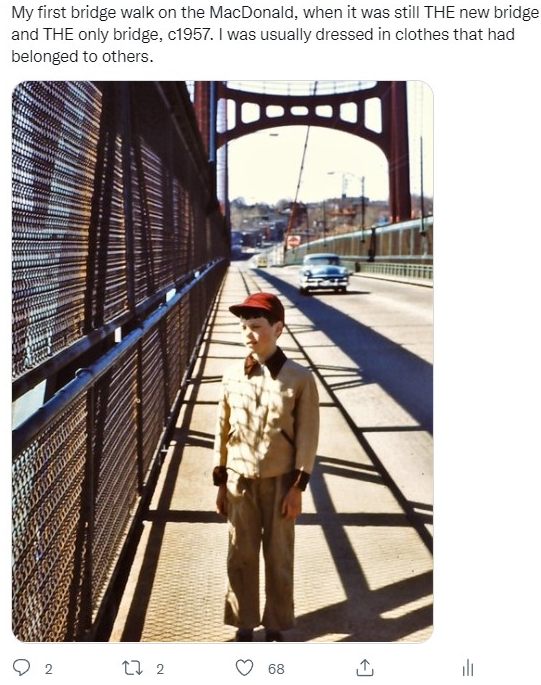 It was a big job to get our house ready for long overdue interior painting. While taking a break I realized I was reflected in an interesting indoor/outdoor moment. 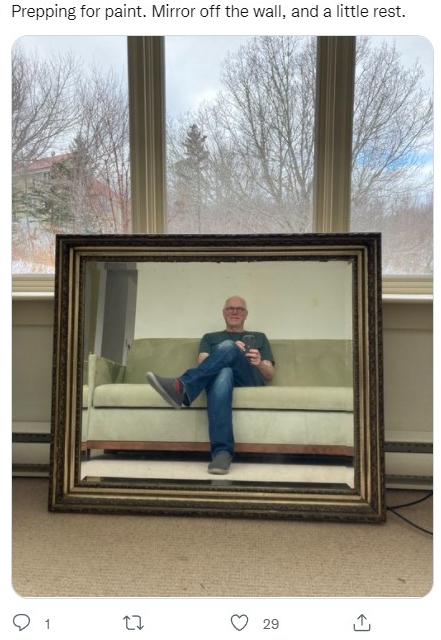 Well I thought it was hilarious

Sometimes I put together a tweet that I think is hilarious but public opinion is “not so much.”  When I first saw the new parking garage built on the Common it appeared aggressively unfriendly and uninviting. The facade of black slits made me think of Gort the enigmatic robot in the ominous 1951 movie The Day the Earth Stood Still. This didn’t seem to catch other folks’ imagination. 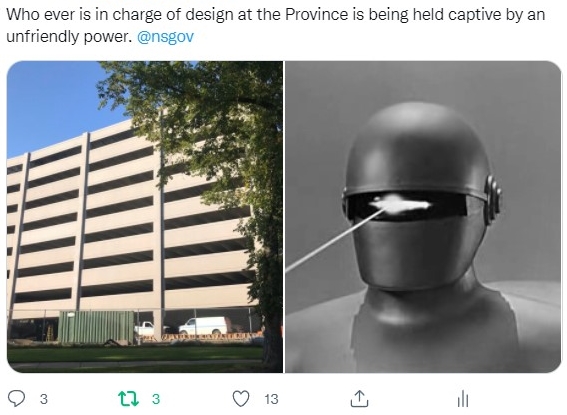 Back in the days when nose swabs were new and we were all trying to be brave I remembered these nose-challenged guys. I thought it might get a little more traction. 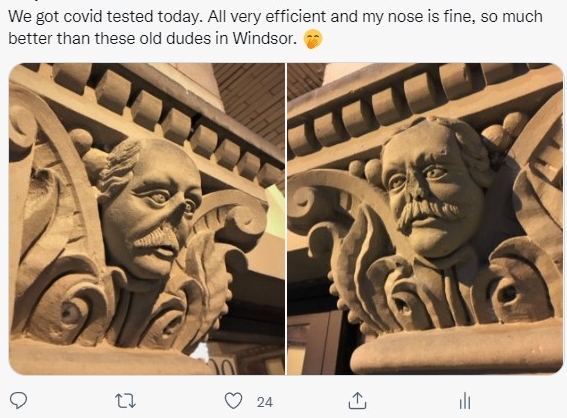 However when vaccination hesitancy was at a peak in May my little polio vaccine sticker gathered 60,000 impressions, by far the most engagement of the year. 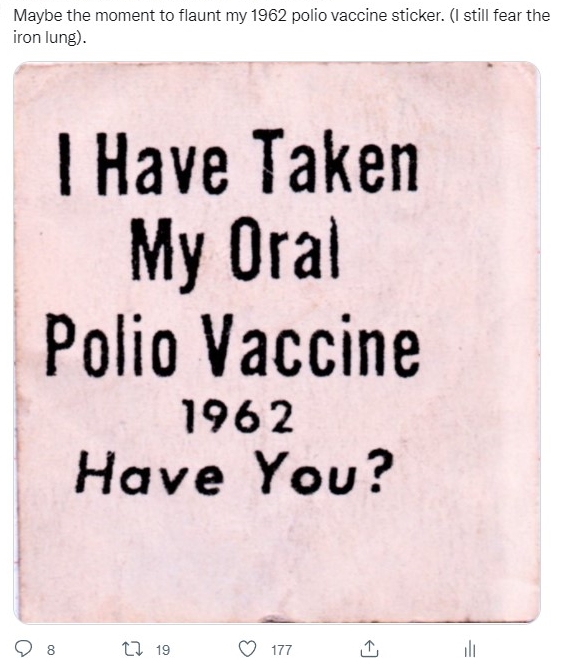