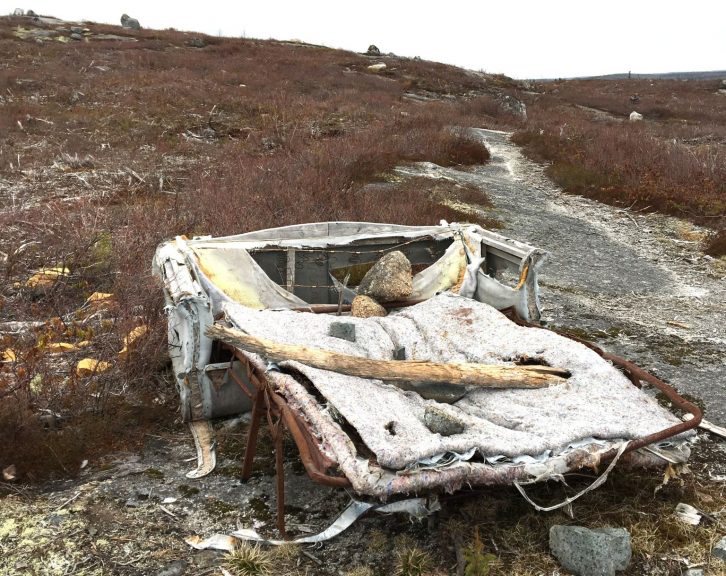 Have you noticed the heated comments about the site for a new Outpatient Centre (here is an example on Halifax Examiner)?  When I heard that the facility would be built in Bayers Lake Business Park it felt like an insult. Bayers Lake is a soulless wasteland that makes no attempt to actually welcome people. Sort of like the Mumford Bus Terminal spread over a vast landscape.

I’d never visited the proposed site for the Centre but was aware that it had been clearcut a while back and had been a favourite terrain for mountain biking. This week I visited Bayers Lake for the first time in a year to get some pieces to repair a downspout, an opportunity for a very quick dash onto the proposed site to snap a couple of photos.

The big, new sign, that politicians had recently gathered around for a photo op, stood in front of a landscape that looked as it did when the glaciers retreated 20,000(?) years ago. At a fine scale the land is quite beautiful with glacial erratics (boulders dropped by the melting ice) covered with ancient lichens, and the surrounding barrens supporting low, native plants. Sort of Peggy’s Cove lite, without waves. The granite ridge rises above a sad landscape of big box stores, and highways, to a wall of apartments. The drone of traffic is constant. The Outpatient Centre site viewed from the parking lot in front of Canadian Tire suggests that there will be a lot of blasting to flatten that hill of granite. This was a photo begging to be taken.  The health centre already has its first bed! The backside of the stores read as a great wall, to keep out sick people. Not every service needs to be offered in downtown Halifax,” said Premier McNeil. “We often hear Nova Scotians say traffic and parking are major concerns when travelling to the VG site of the QEII Health Sciences Centre. “

This news is important for patients travelling from rural areas and those who live off the Halifax peninsula, who will be able to go to appointments without having to worry about traffic or parking. It’s a huge part of how your Liberal government is meeting the needs of patients and making care easier to access in a convenient, less intimidating, community setting.

The Community Outpatient Centre represents a big shift in how our province must organize our infrastructure to meet the needs of patients for decades to come.

And my helpful redraft (although the Bayers Lake site might no longer fit the bill):

“We need to put services where they are accessible” said Premier McNeil, “and design them so they make our communities more vibrant.”

It is important that every patient will be able to go to appointments without worry. It’s a huge part of how your Liberal government is meeting the needs of patients and making care easier to access in a convenient, healing, and community setting.

The Community Outpatient Centre represents a big shift in how our province must organize our infrastructure to enhance the livability of our towns and cities to meet the needs of patients for decades to come.