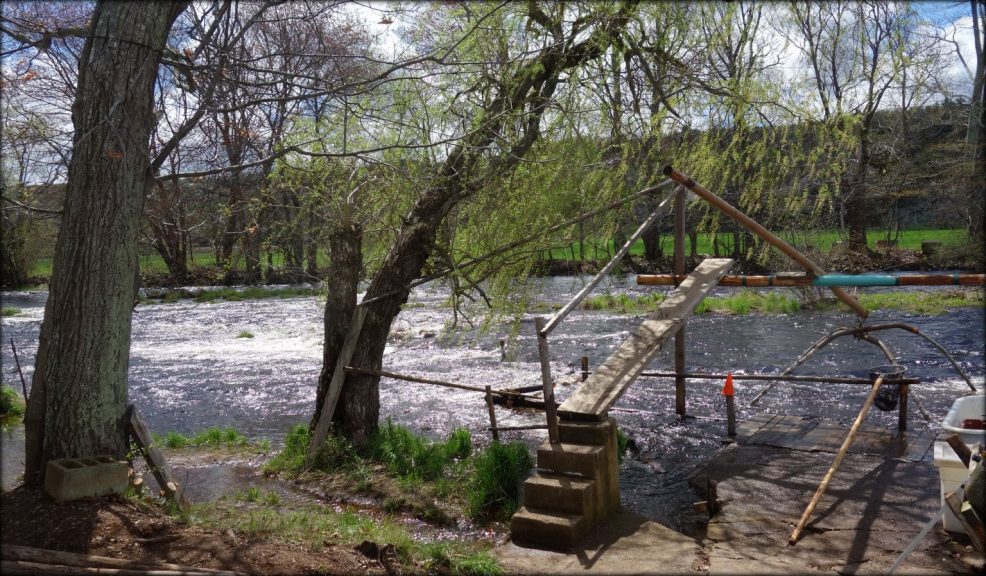 In a world where traditions are disappearing every day, it was exhilarating to recently visit the gaspereau fishing operation of Chris and Colin Gertridge. The brothers are the sixth generation to catch this small relative of the herring each spring on the banks of the aptly named Gaspereau River. Gaspereau are also called alewives and on the South Shore they are known as kiacks, apparently their name in Mi’kmaq. Thousands of years before Acadians and the Planter ancestors of the Gertridge brothers fished this river, Mi’kmaq people gathered here for an annual harvest.

Our adventure was organized for members of Slow Food Nova Scotia. We were directed down a muddy lane, through vineyards owned by Benjamin Bridge Winery, to a cluster of small buildings at the river’s edge. As we arrived, Colin picked up a handful of small stones from a bucket and began hurling them into the centre of the river. Then he grabbed a long pole and started whacking the water below the fishing platform. This ritual was to ‘herd’ fish over a large square net suspended in the river. When fish were observed gathering above the net, it was suddenly hoisted out of the water to the great surprise of dozens of gaspereau. Here Colin uses a dip net to collect the flapping fish. The fish were on a journey from saltwater to spawn in (wait for it) Gaspereau Lake. The Gertridges record their daily catch on the whitewashed wall of the fish shed. The fish are salted as soon as they are caught, and stored in large plastic bins awaiting shipment to a processor in Saint John. Ultimately the cured fish go to the island of Haiti. In the 18th and 19th centuries, slave owners in the Caribbean imported gaspereau as an inexpensive food to feed their workers. A taste for gaspereau has endured in Haiti, although Chris says the market is softening.

The regulated fishery on the Gaspereau happens in May and there are about a dozen nets on the river. Another operation is just up stream. On the morning we visited, Chris said this and his were the only locations catching fish that day. Did they text one another? No, said Chris, at the store, down by the bridge, folks keep track of how things are going and word spreads. Chris was rhapsodic about this fishery. He takes a vacation from his day job so he can spend time beside the river, listening to the water, relaxing next to the stove in a little shed, or scrambling to net all the fish when a run begins. The beauty of the setting on the sunny morning we visited made his enthusiasm totally understandable.