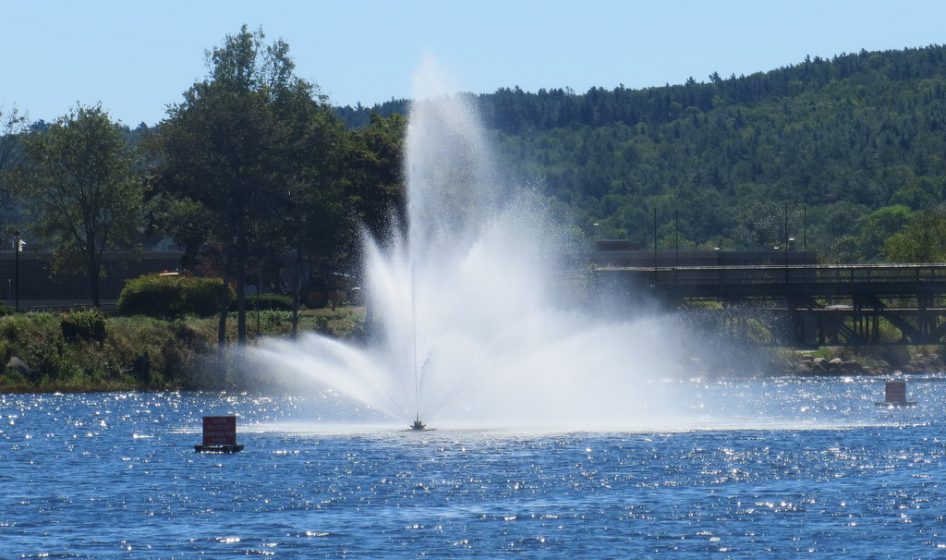 Sheila was attending a cheese making workshop in Bridgewater which offered the perfect opportunity for me to explore the major town on the South Shore. (I’d already attended several cheese making workshops and learned that with many litres of milk I could make a tiny piece of tasteless cheese). My exploration on Monday was the most walking around town I’ve ever done.

An easy place to start was the big, rambling Brookside Cemetery. It was founded in the late 19th century at a time when cemeteries were being designed as park-like settings. A terraced hill is the central feature, with prominent families like the Davisons (timber and sawmills) and the Dawsons (merchants) buried at the higher elevations. (Reminiscent of the step pyramid designed by Inhotep in the Third Dynasty of ancient Egypt?) 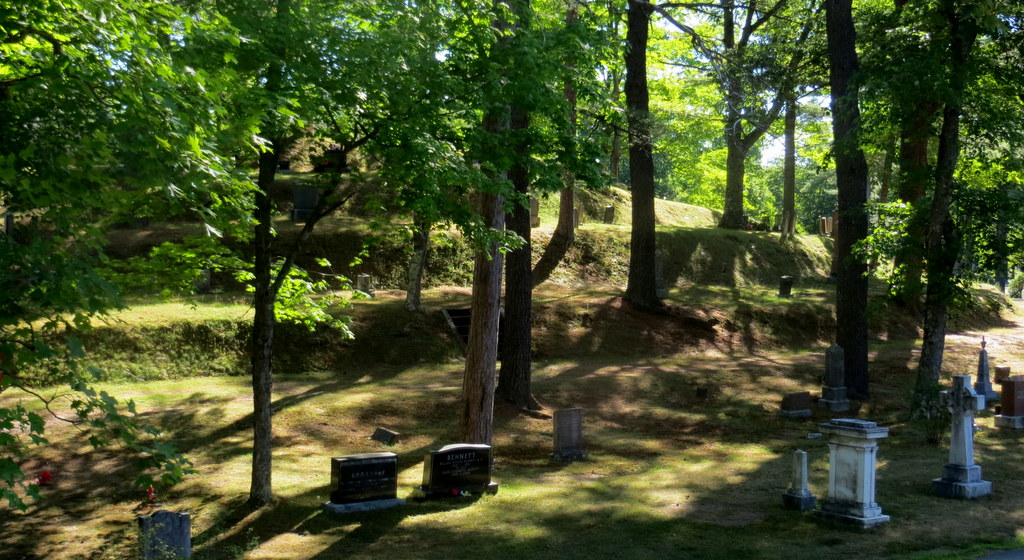 A favourite stone had a spirited willow tree, confident typography and a delightful collection of names. It was the memorial for Freelove, the wife of Philo T. Beardsley and the daughter of Zebulon Durland. She died in 1868 aged 72. 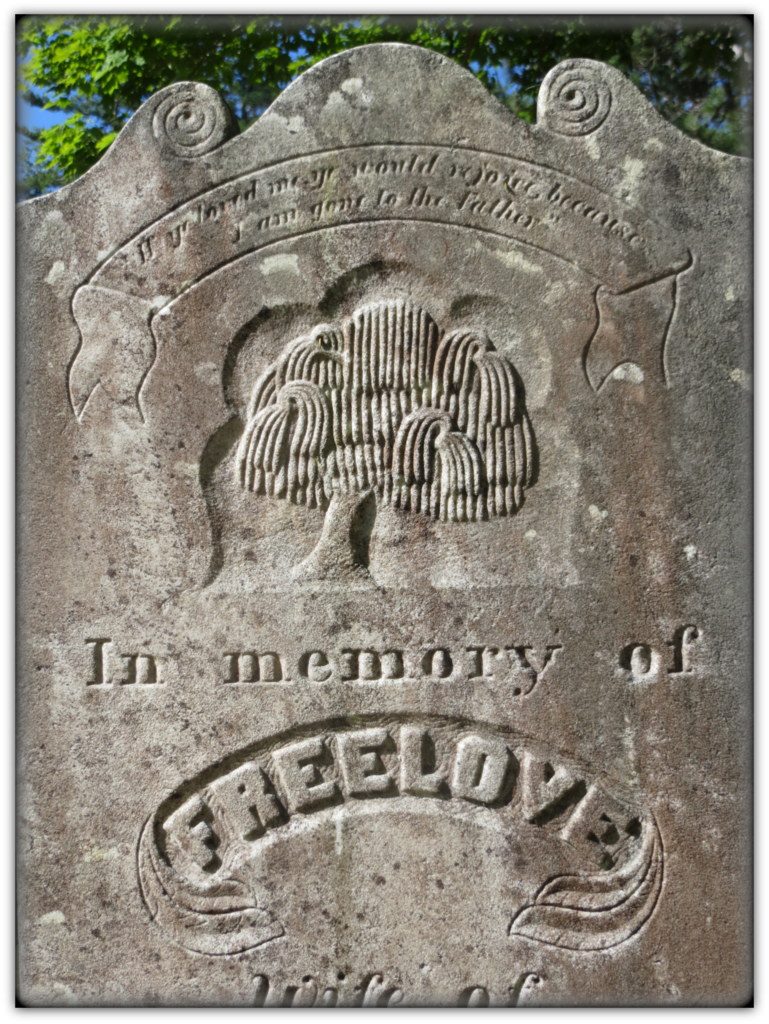 Most of the domestic architecture I noticed was not particularly spirited. An exception was this Victorian pile that compares favourably with the excesses of Lunenburg. 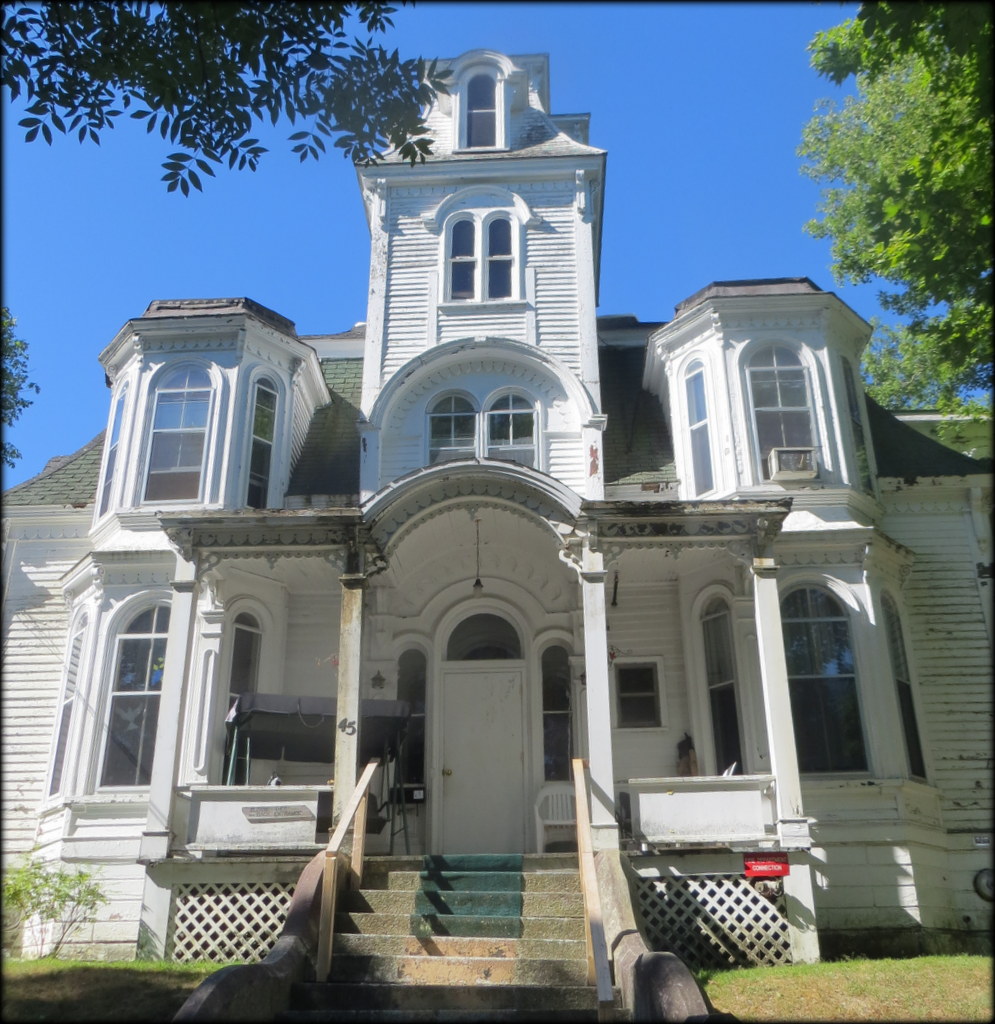 The rollicksome edges to the front steps are massive pieces of granite. Never seen anything like them. 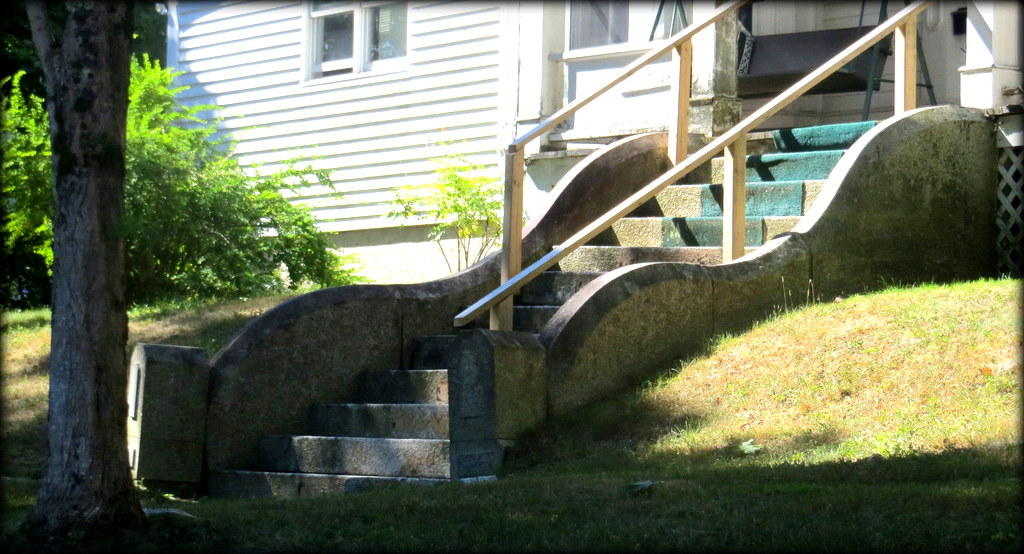 The major charm of Bridgewater is the wide LaHave River that divides the town in two. King Street, the historic commercial street, runs along the west bank of the river and demonstrates what happened to downtowns when malls and then big boxes sapped away business.

There were plenty of empty shop fronts and some facades that were striking in their lack of features. 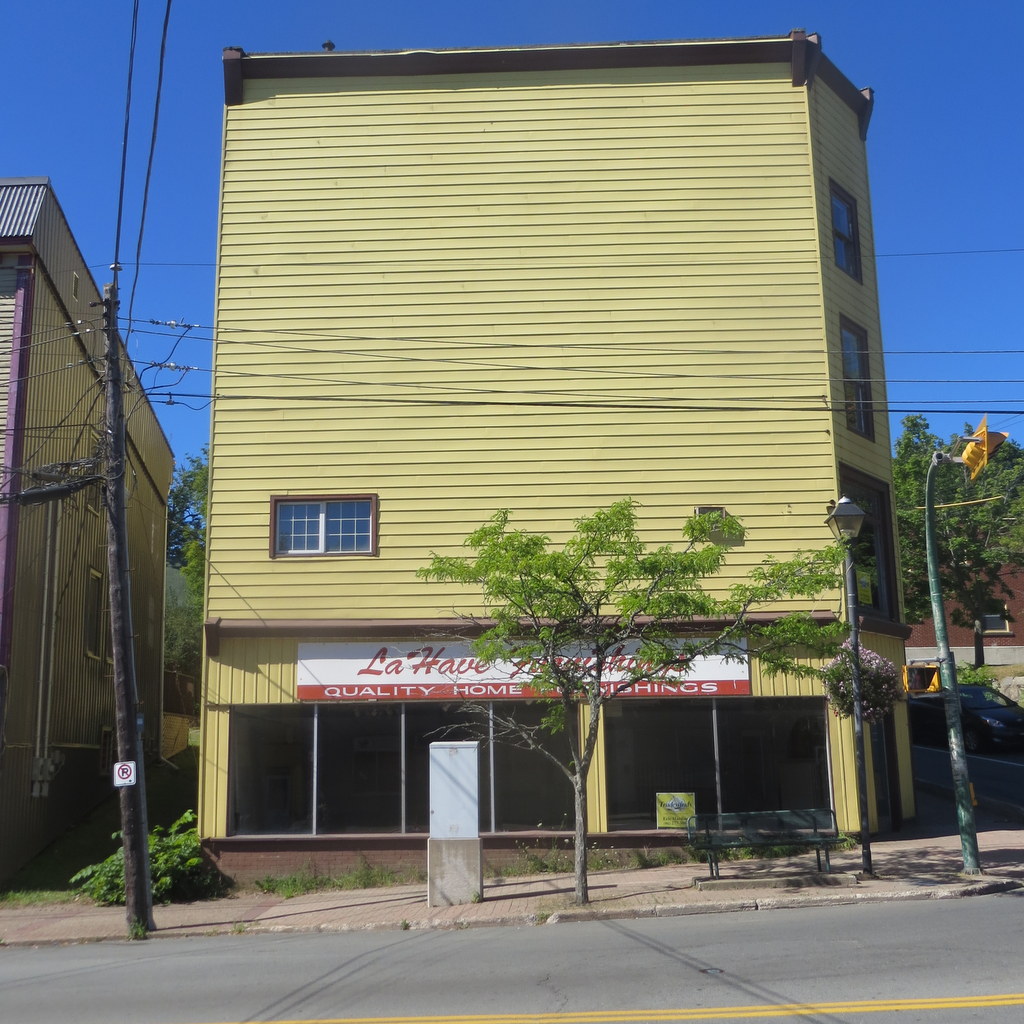 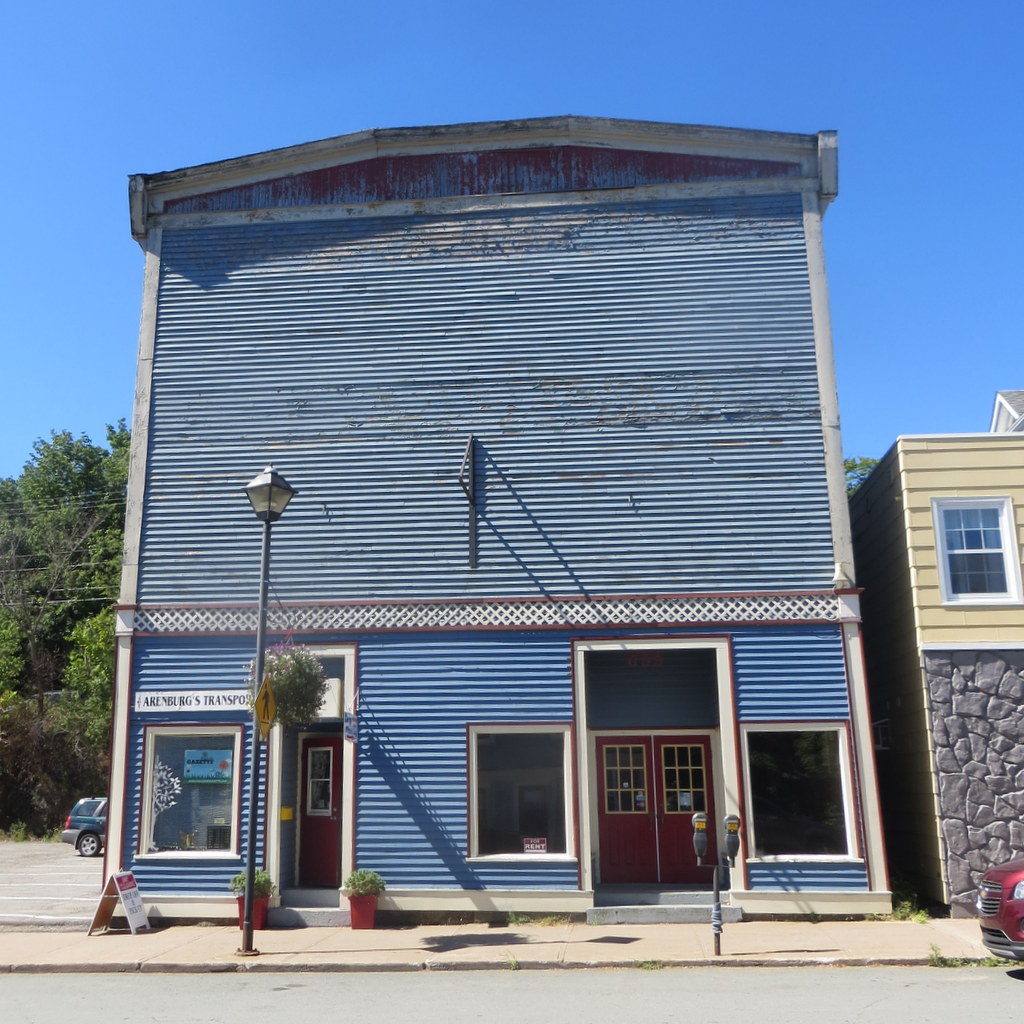 On the other hand, people rave that the Lanna Thai Kitchen is the best Thai restaurant in the province. And I drank a tasty cappuccino down the block at Fancy Pants. Both on King, along with these colourful enterprises. 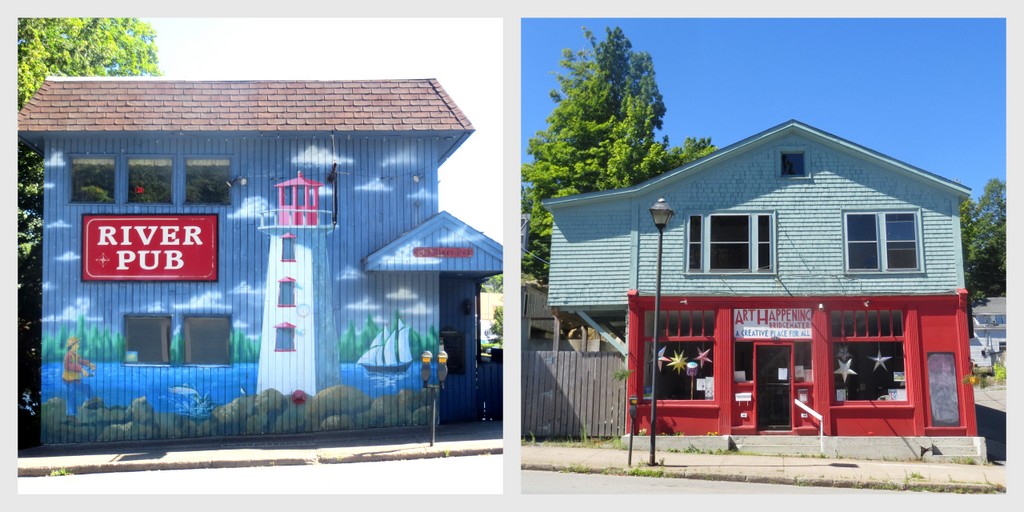 Sagors’ bookstore was a long time fixture of the river side. The store is gone but its empty building and clever sign endures. 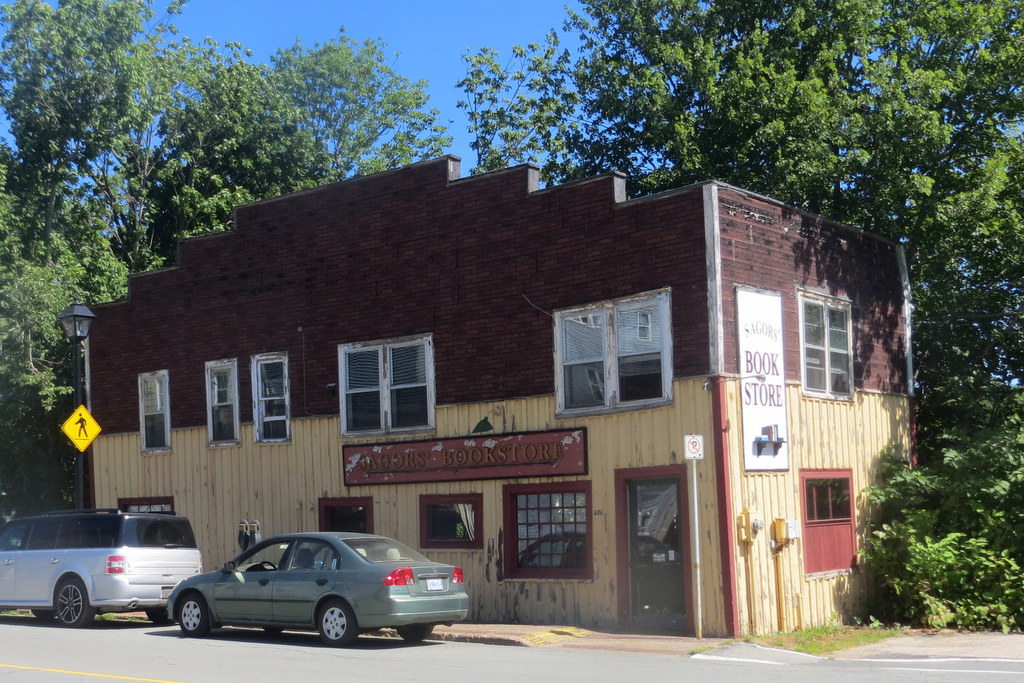 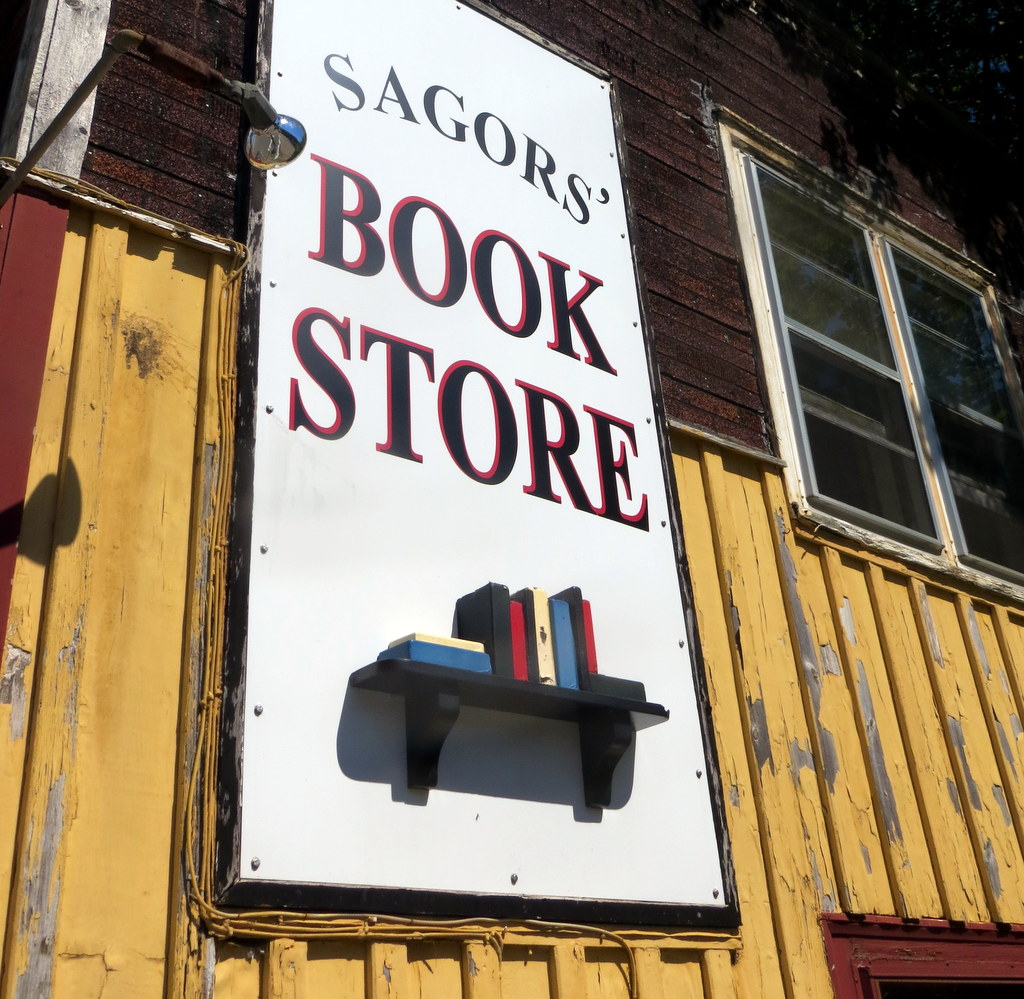 King Street Court is a well-designed little surprise. A compact riverside park, below street level, with a bandstand and stepped seating. The perfect place for a performance with the river as a backdrop. 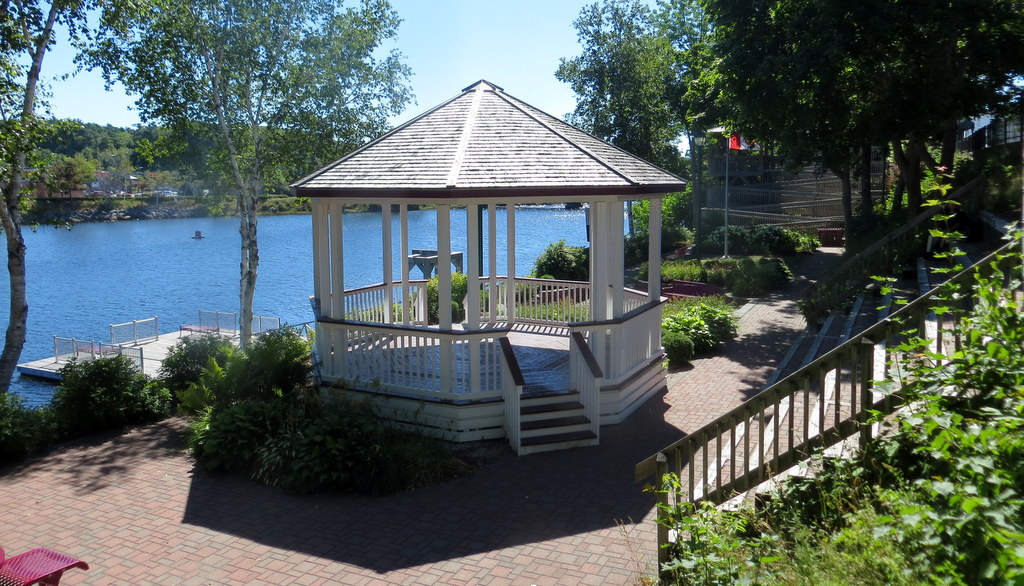 You can descend a gangplank to a floating platform to get a closer view of a water jet in the middle of the river.  A celebration of place that worked for me. 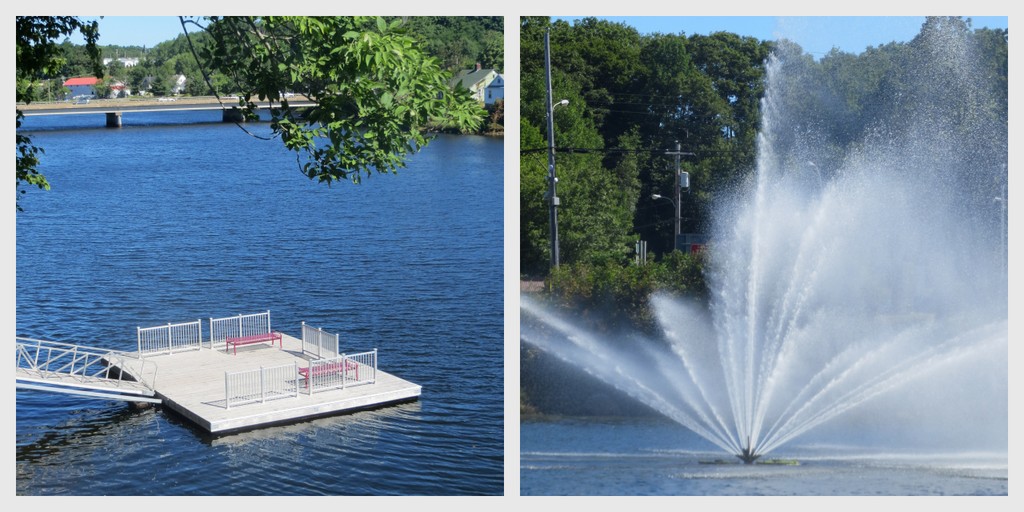 Noticed a couple of rounded corners on brick buildings. The BMO in a traditional bank building on King Street. . . 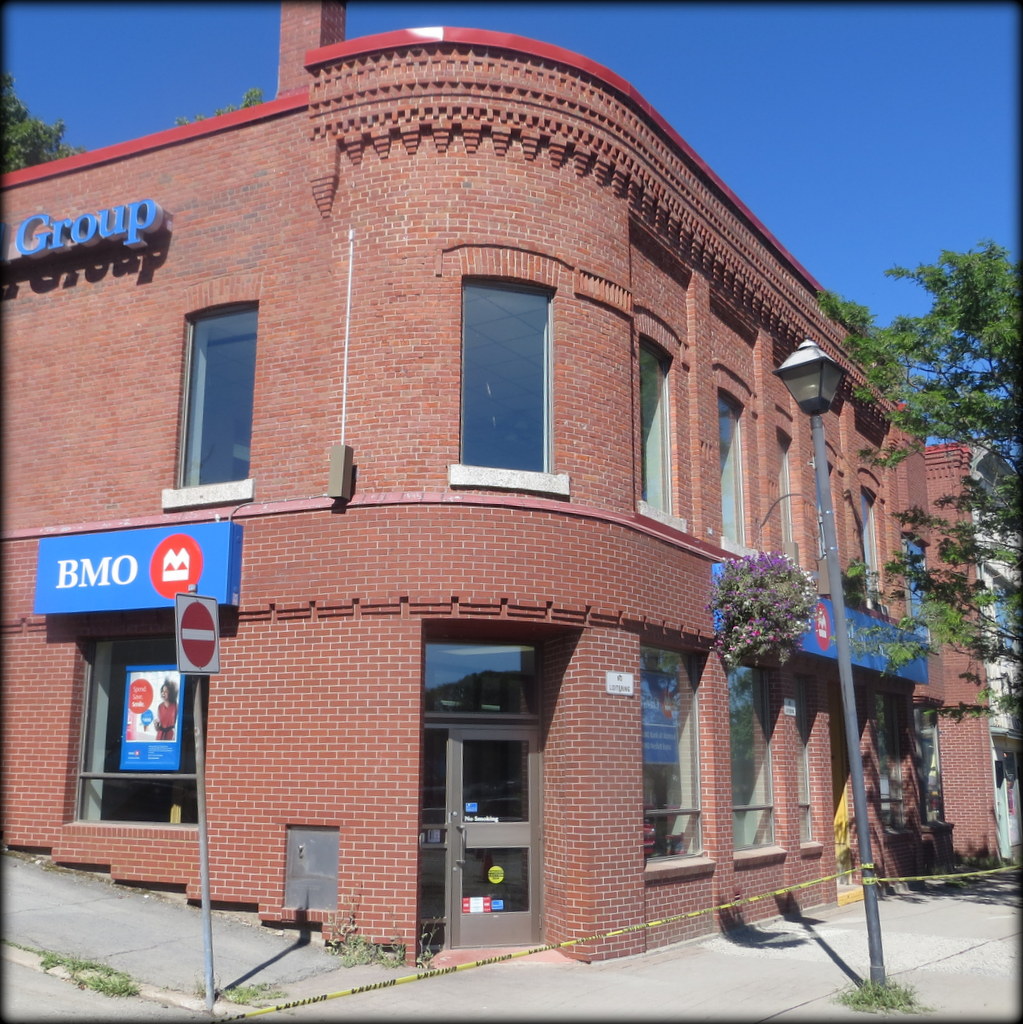 And this attractive little building making smart use of a sloping site. 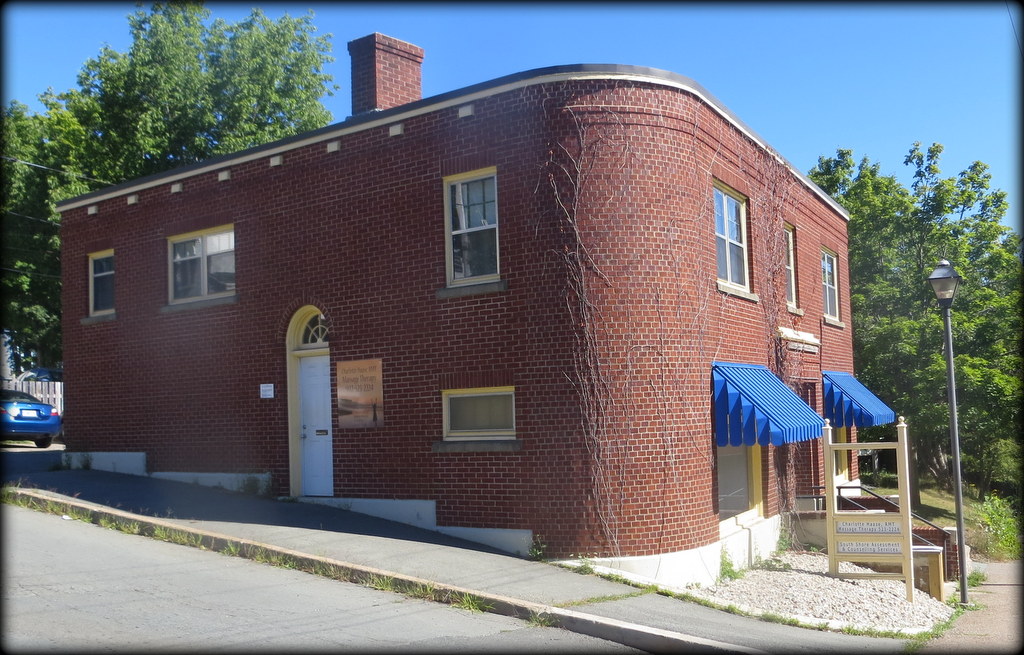 In an unfamiliar residential district, an exotic board-and-batten-clad Anglican church materialized. Felt like my idea of stave churches of northern Europe. 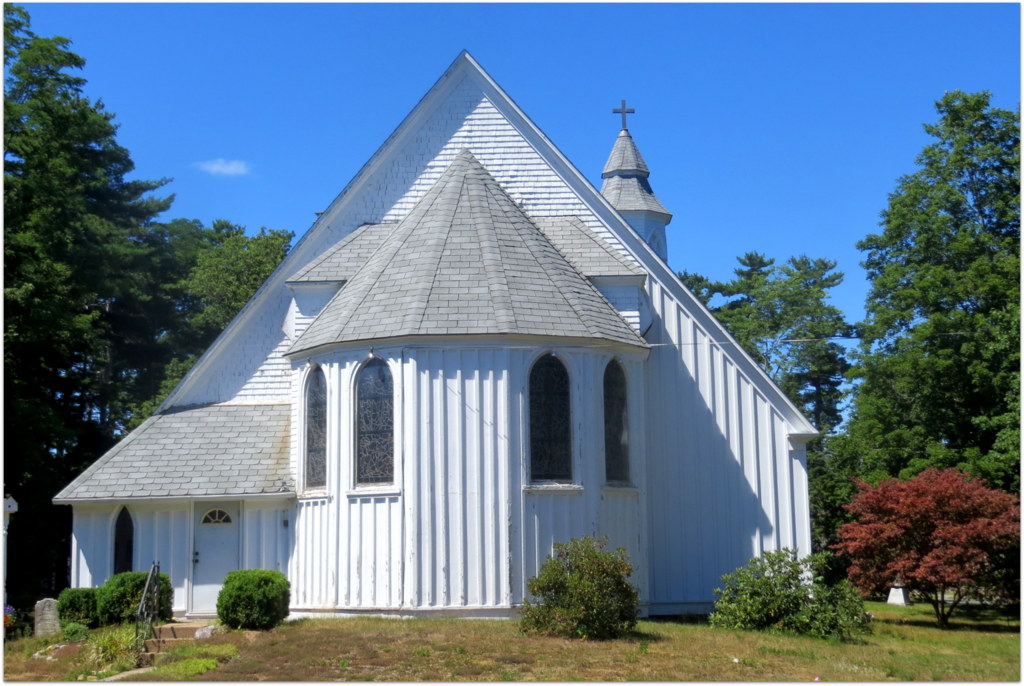 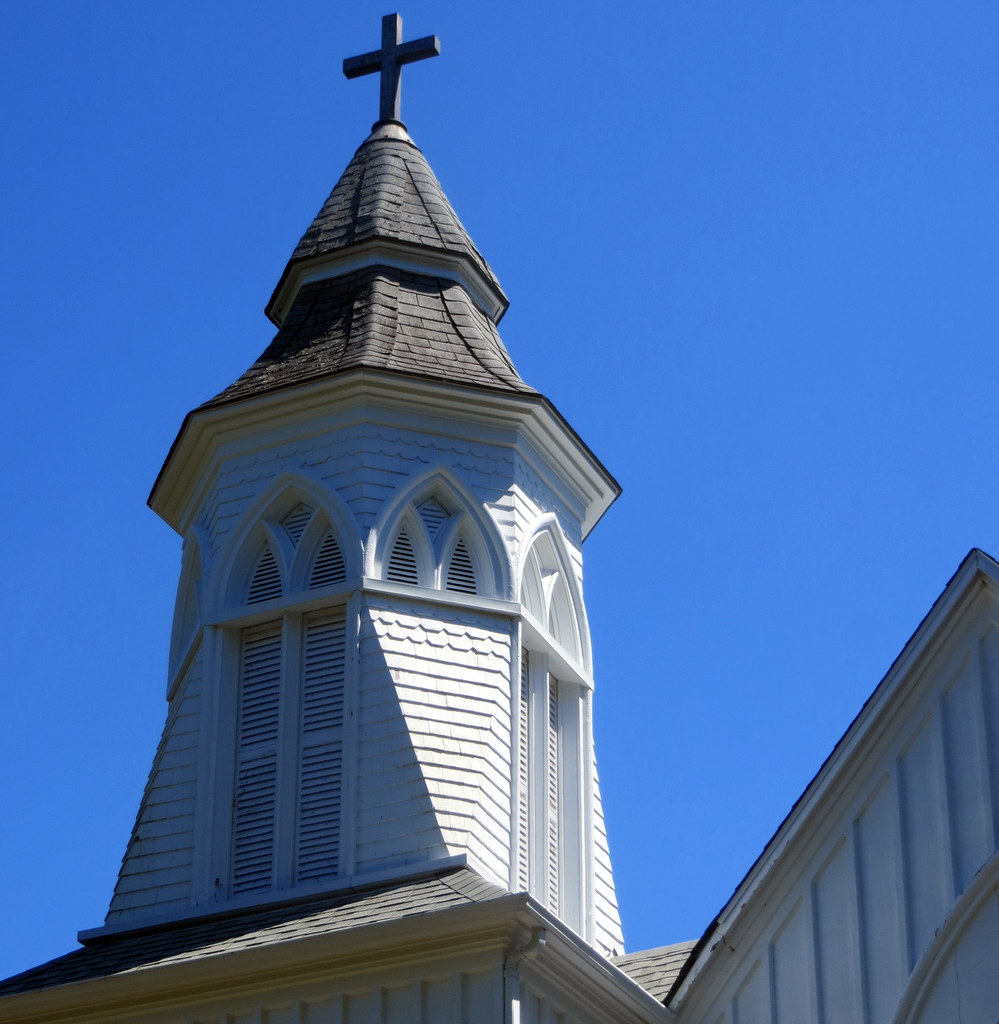 The South Shore Exhibition is a big deal each July, particularly if you are a fan of ox pulls and want to discuss the merits of the head yoke versus the neck yoke. I stopped to look at the cutout illustrations on the exhibition buildings. 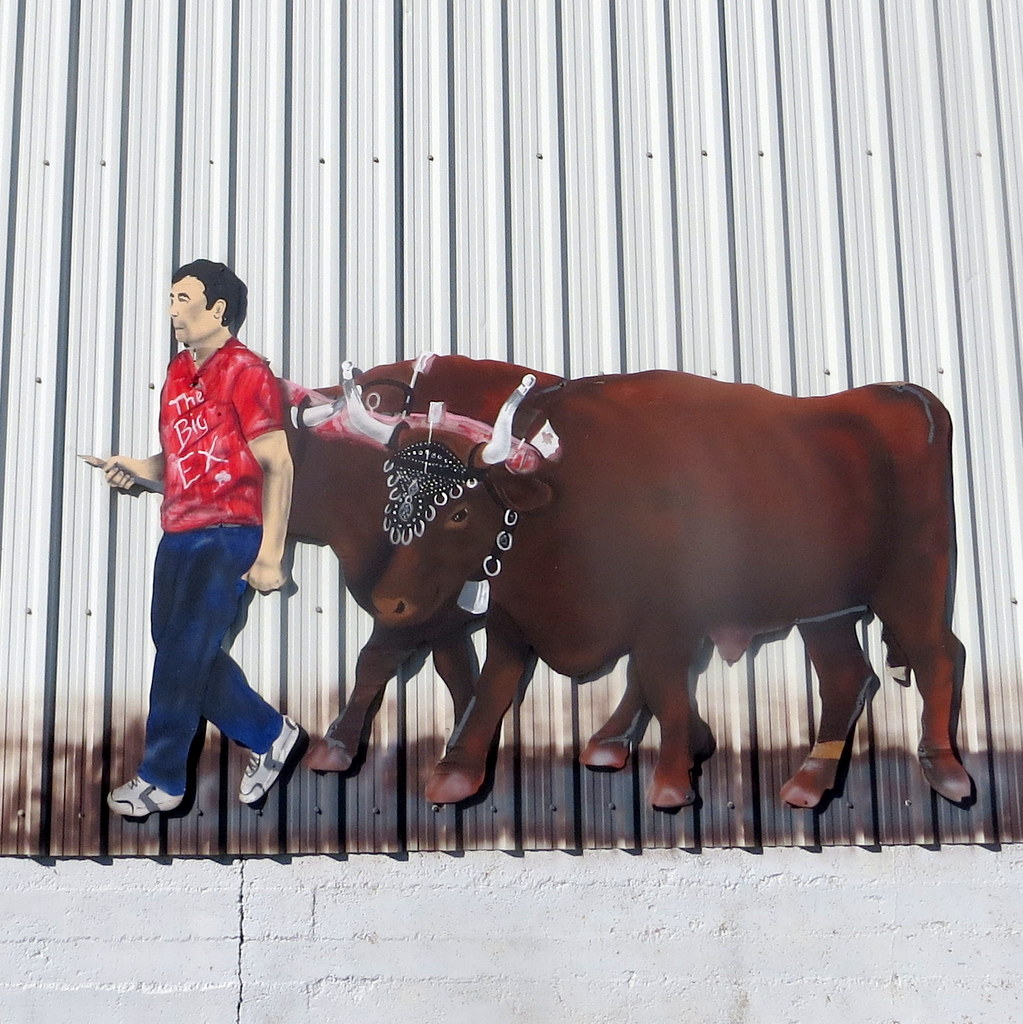 The grain of the Douglas fir plywood gave the pig some extra character. 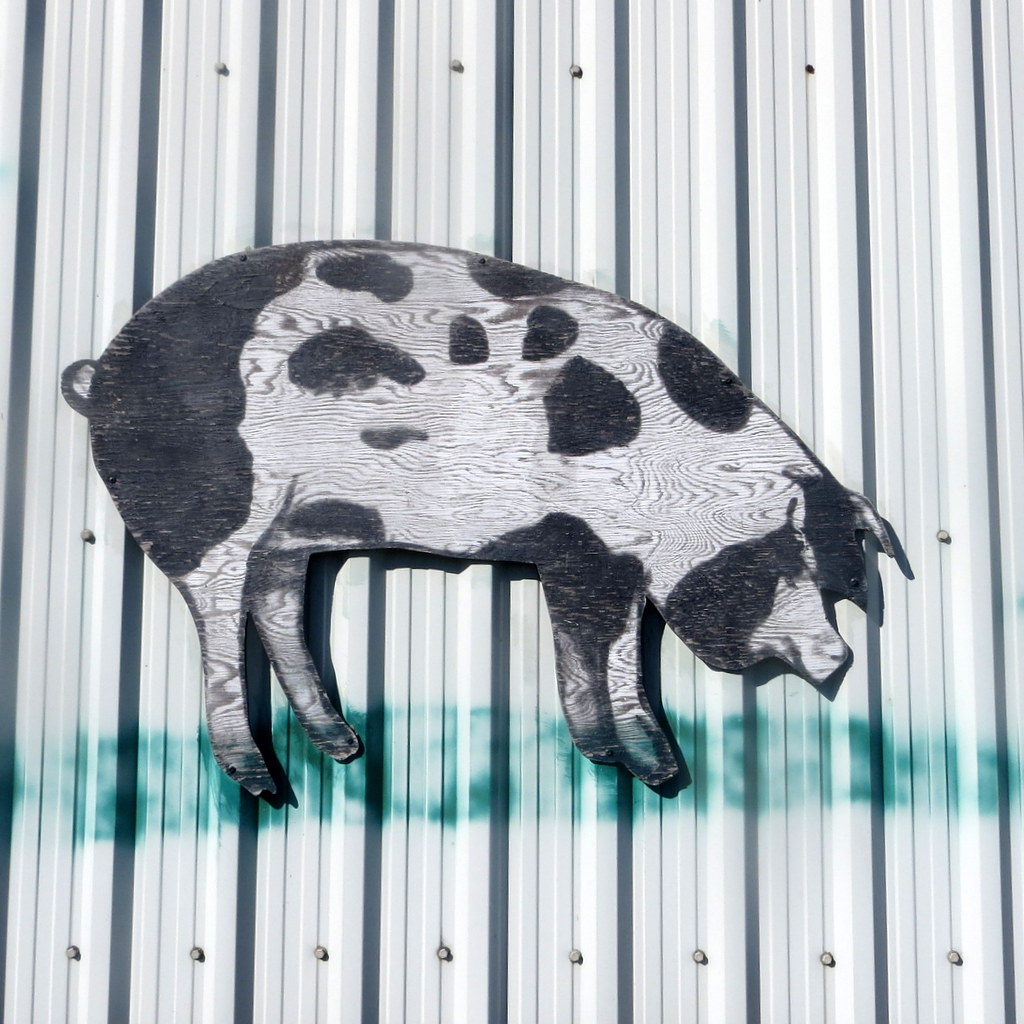 Lacking in character was The Big EX branding. I was disappointed because this facade used to have some powerful typography. 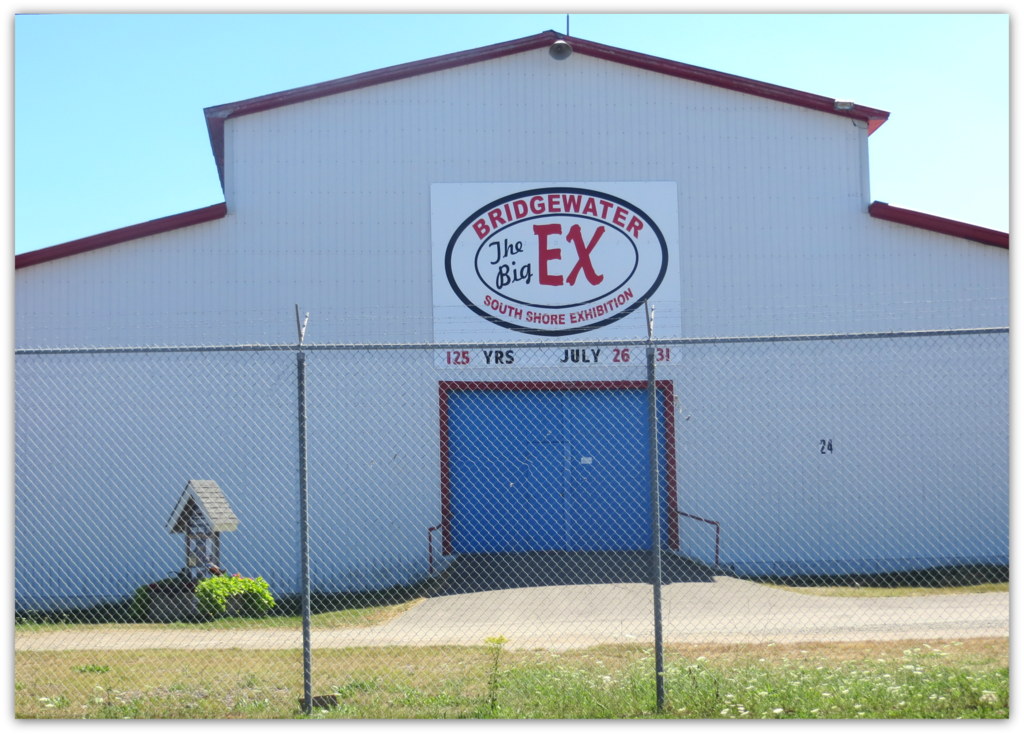 Here is a photo I took from the same spot in the 1970s. Don’t be afraid to be bold, Bridgewater. 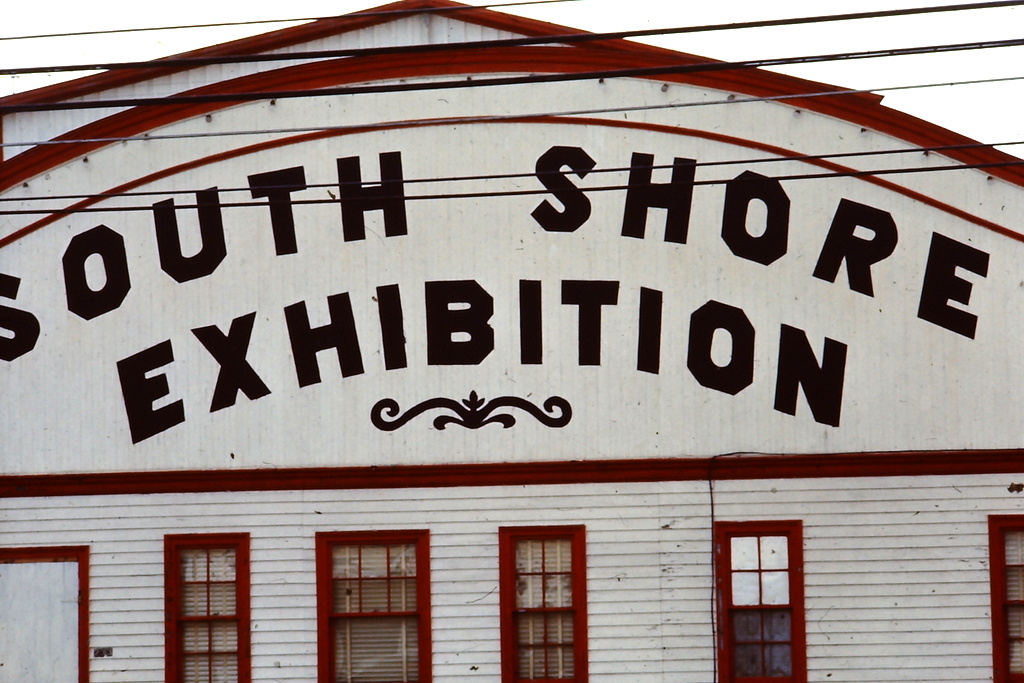 During my visit it occurred to me that Bridgewater had accepted the Walmarts and the Staples et al so that Lunenburg and Mahone Bay and the rest of the County could be as picturesque as they possibly could be. It also felt that the town recognized that it was not a tourist destination and as a consequence felt more authentic.

Bridgewater, I’m glad to have become reacquainted, and that Thai restaurant looms large in our future.

Here is some of the richness of experience that older people get to enjoy.

On King Street a plaque told me the oldest commercial building housed a store operated by several generations of the Dawson family. 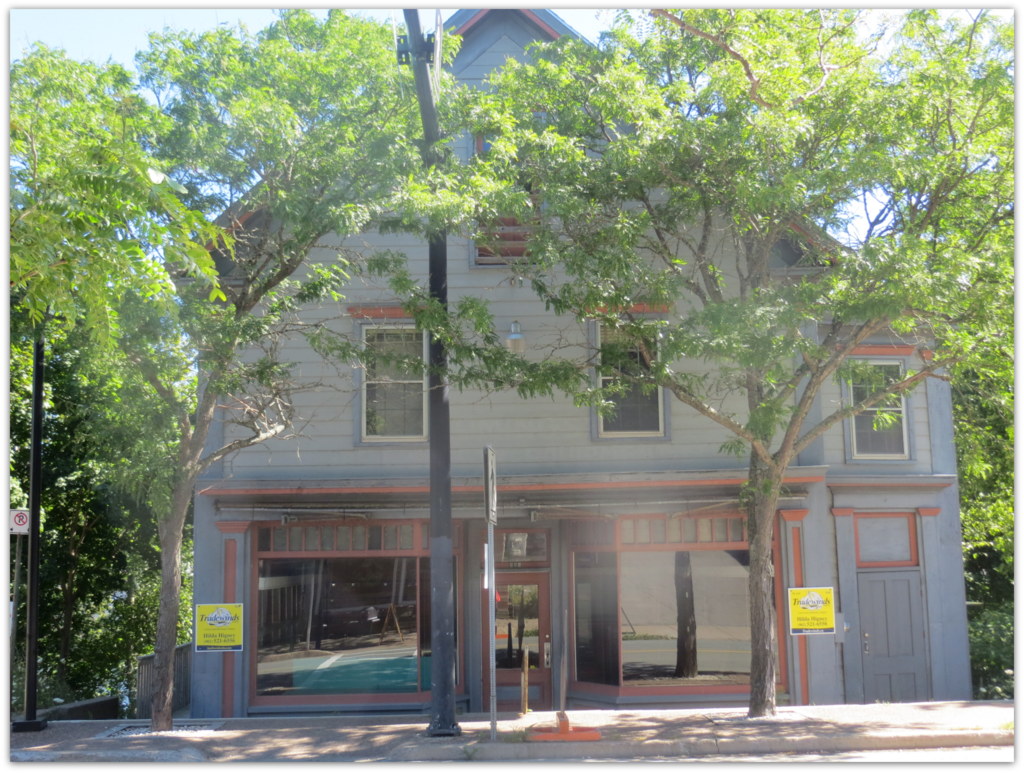 In Brookside Cemetery I came upon the Dawson family plot and was pleased to find the stone for Bob Dawson. Professor Dawson had taught in the English Department at Dalhousie and had a passion for printing presses and hand set type. He established a print shop as part of the Library Science program, and now the Dawson Printshop is at NSCAD. His gravestone commemorates interests in printing, books and I believe wine and Knights Templar. 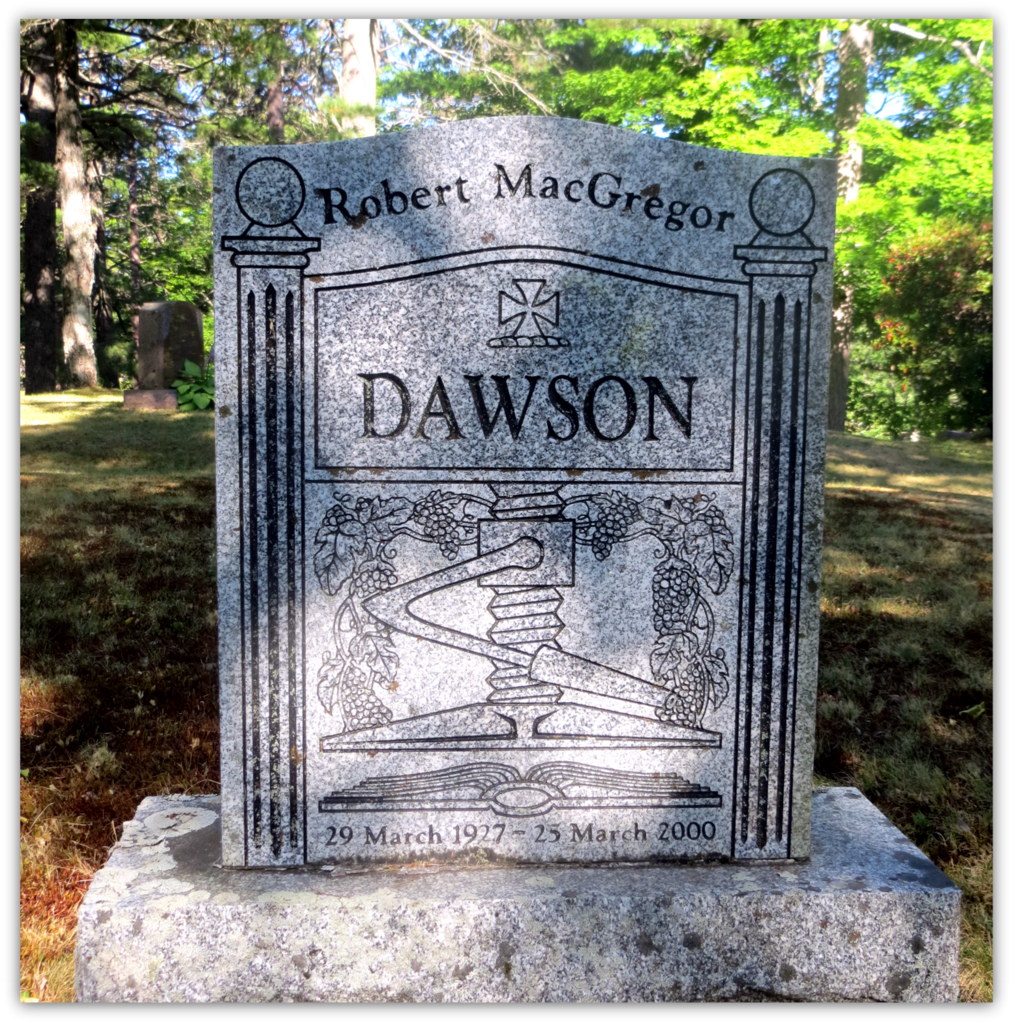 About 1975 I was part of the team responsible for the restoration and interpretation of the Wile Carding Mill in Bridgewater. Looking at at an old slide of the wool carding machine I recalled that Bob Dawson had printed the price card on the wall using hand-set wooden type appropriate to the age of the mill. 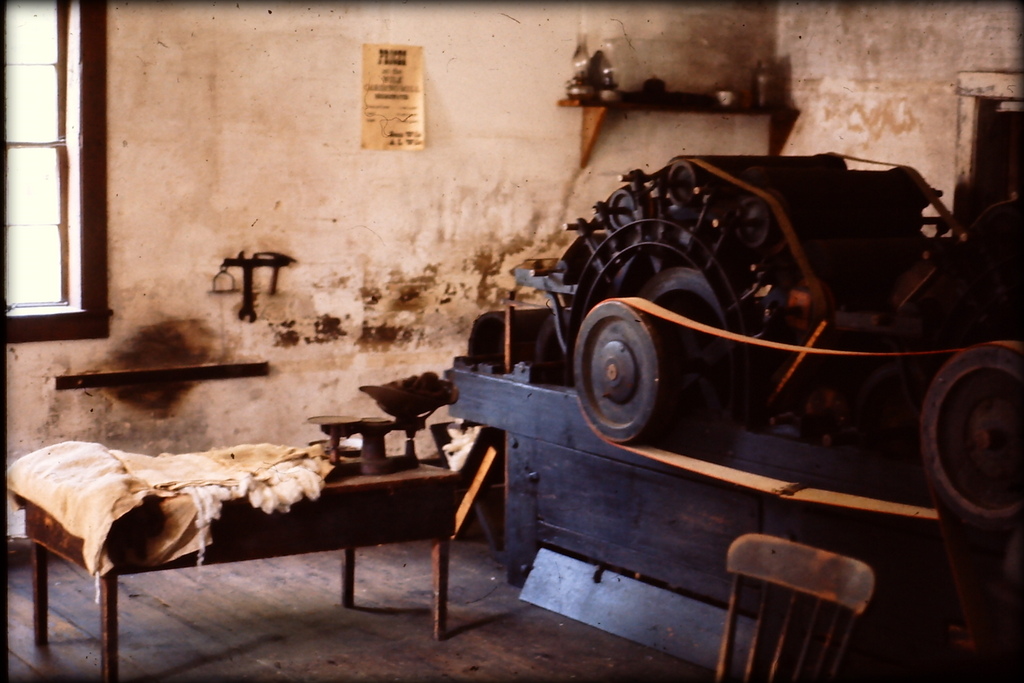 The Wile Mill is a beautiful little industrial workplace that you should visit. A Nova Scotia Museum Site.