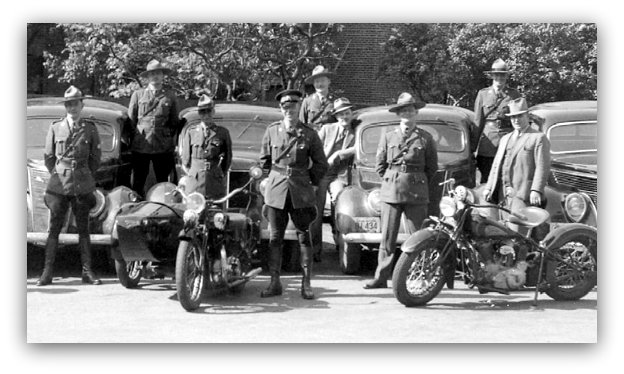 I’m fond of my Twitter community of mostly strangers. Occasionally they will ask if I know something and of course we all like to be noticed. So last week when I received this tweet I jumped to attention.

Turned out the Mounties had a photo of their Traffic Services Unit but did not know when and where it was taken. They thought the photo was somewhere in Nova Scotia in the 1930s/40s. This is just the sort of challenge that appeals to me so I started looking closely at the carefully composed photo. The cars would date the photo and since I know nothing about cars that was left for others to handle. The licence plates were blurred but they could well say Nova Scotia.

The buildings in the background were not familiar. The brick building at the right appeared to be a church or church hall. It felt  as if the cars were in a parking lot and that we were seeing the back side of buildings  not a streetscape. The real clue was a painted sign on the building to the centre left: K Garten Furrier (plus a lovely fox illustration). With this information I knew the problem would be solved. There are detailed annual directories for Halifax and the province that list businesses and also go street by street listing the head of household or the business. I didn’t know of directories for this period online so I tweeted that maybe the Archives of Nova Scotia would help. It was after hours but someone was monitoring the Archives account (isn’t that clever) and volunteered to “have a quick peek tomorrow.” So Garten was in Halifax and had a shop on Spring Garden Road, but I was quite certain the Mounties were not lined up on Spring Garden. What if we were looking at the back of Garten’s shop? There is only one block of Spring Garden that has a street running in close parallel, Doyle. I remembered there had been a church at Spring Garden, Queen, Doyle so maybe that accounted for the window.

After a little searching on the Archives site I found more than you could ever hope for: beautiful detailed photos of this obscure little corner of the city on March 21, 1942. That was the day that the First Baptist Church and its hall burned down. Here is almost the identical angle as the Mountie shot (which we now knew must have been taken before 1942). Helpfully the photographer got an elevated view of the inferno from a building across the street. This is looking south west down Doyle towards Queen Street. The houses in the distance are now the brightly painted shops of Vintage Row. The Mountie cars had been parked on the unpaved edge of the street to the left. Why would this be a good location to take the the Traffic Unit group photo? Again the helpful photographer took a picture of the fire-enthralled crowd that shows the still existing building on the north side of the street. It is a General Motors car dealership and garage. Could the Mounties have been getting some new cars? Today Port of Wines is at the Queen Street end of this building.

So a neat little story from my point of view: the Mounties were assisted in their investigations, Twitter got to participate and watch the investigation unfold. Personally I learned a bunch of stuff. A perfect way to spend a Thursday evening with friends.

I visited Doyle Street to better understand the setting. Demolition has started on the Maritime Life building  and it was poignant to realize that it had taken on some of the character of the burning church. Both buildings survived about 60 years. Expect the new Doyle Block mega building to lose visibility about 2080.