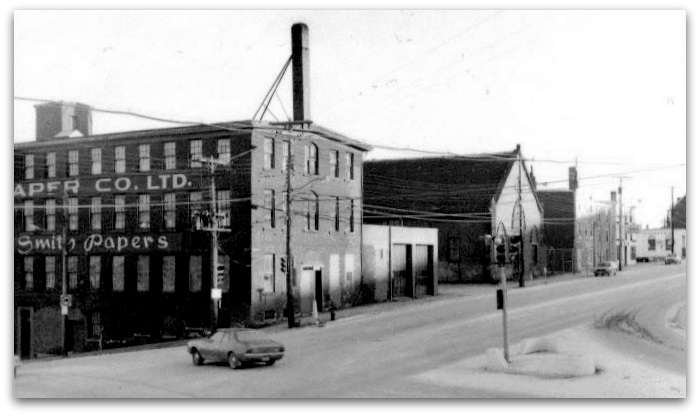 Do you ever have fantasies about living in odd buildings around town? Prince’s Lodge music house? The Dingle Tower? Mumford Road Bus Terminal building? In the 1970s I used to imagine living in an old factory building that was at the south east corner of Brunswick and Duke Streets. We were just learning about the artist’s lofts in New York and imagined living in a spare and bright space with a view of the Citadel and easy access to the new cinemas, clubs and shops of Scotia Square across the street. Not to mention Woolco. My dream home was built about 1870 as the Taylor Shoe Factory. Below is what the area looked like at that time. The factory building was later doubled in size to stretch a full block towards the harbour. By 1890 the company employed over 180 workers, 50 of them women, producing 4500 pairs of shoes a week. There was a retail shop on Granville Street and their products were marketed throughout the Atlantic Provinces and St Pierre. From a 1897 business directory

In the 19th century, downtown Halifax was full of manufacturers and processors and their workers all lived within walking distance.

In my lifetime the factory building was used by the Schofield Paper Co. I took a few pictures when it was clear that my loft would remain a dream and all the buildings in that block would be torn down for the Scotia Bank Centre. Interesting to see that the configuration of the intersection has not changed in the last 40 years.

The building was looking tired just before it was put out of its misery. I had an opportunity to get inside as Schofield Paper was preparing to move out.  It was a very basic industrial space with exposed brick walls and wooden posts and beams. The only details I recall were these worn, brass strips on the treads of a very steep staircase. In March 1880 this Company established a Benefit Association to care for sick members with eighty-six members who contributed three or five cents weekly according to wage scales. When the members were ill they were paid $1.50 or $3.00 weekly for eight weeks, and half the amount for five weeks longer. Most of the men employed in the factory in 1882 earned $2.00 or $4.00 per week.

George S. Yates began the Nova Scotia Boot and Shoe Factory in a fine four story brick building on Upper Water Street. There one hundred and twenty-five operatives were employed in producing one hundred and sixty styles. Most of the goods made in this factory were sold in Mr. Yates’ retail shop on George Street, but were also offered for sale in Bermuda and the West Indies.