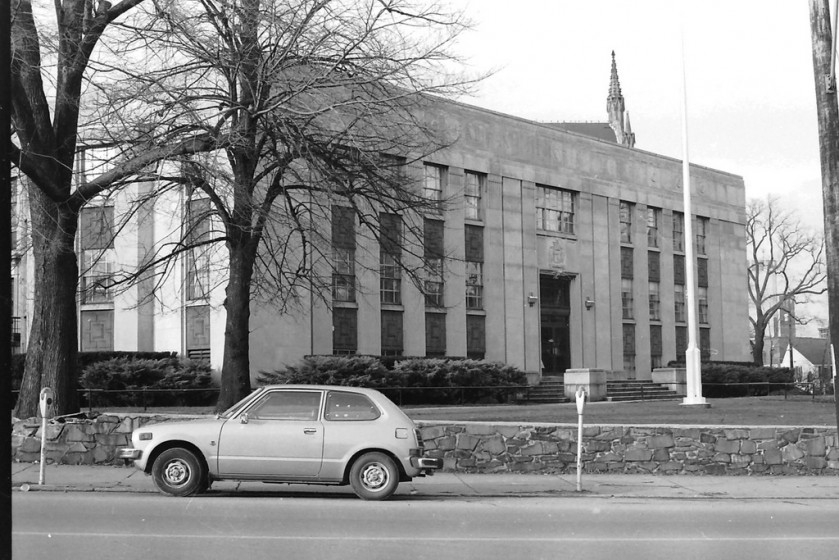 Recently I blogged about the charms of the Maritime Life Building on Spring Garden Road because it is on track to be demolished.  A number of folks said they enjoyed the building and that got me thinking about other mid century buildings around town.

Here are some  buildings I enjoy; are they on your list too? Lets start with the old Zellers on Barrington Street (Discovery Centre). It was built in 1939 at the end of the Great Depression, a time when not much at all was built here. Straight on it is surprisingly formal (I’m not sure I would recognize it without the sign). The distinctive view is of the chamfered corner that energizes the building. It’s been called the best Art Deco building in the city. When we could settle down again after the war there appears to have been a little building boom. One of the first was the Memorial Library begun in 1949.  As befits our War Memorial it has a  balanced, ordered facade. Most of the buildings in this collection are clad in Wallace sandstone from Cumberland County but the library is Ontario limestone. When you look closer the  facade is organized by twelve giant, fluted pilasters that show that the building is rooted in a classical vocabulary.  And great typography. Also in 1949 the National Research Foundation was erecting their building on Oxford Street on the western edge of the Dalhousie campus. For contrast the 1948 Vocational School, once on the Commons, was a substantial block of white stucco. Quite a robust entrance. A number of stucco clad schools were built at this time for us Boomers. I attended one, LeMarchant, built in 1951. Another school we are losing at this moment is St Pat’s High School (built in 1954). The main part of the building was clad in sandstone but I’m a particular fan of the Auditorium that uses the attractive combination of sandstone and brick.  Need we mention the fluted pilasters and typography? Also from 1954 is the Maritime Life Building.  Fun to see it now in context with other buildings of the time. Deep inset entrances seem to have been a thing at this moment. Just up Spring Garden Road is probably one of the last of these big sandstone clad buildings to be constructed. The Sovereign Building will not get many people excited. But stop and look up and you’ll be rewarded with our favourite fluted pilasters and careful typography! When you enjoy looking at buildings it is fun to discover the architectural vocabulary that was popular at particular times. Just assembling this little collection has got me thinking about what other mid century buildings I’ve been ignoring. That’s what made me stop this morning  to gaze at a building on Barrington Street facing Cornwallis Park. I think it was a Federal Government building (Defence Research?) and that it dates around 1960.   Maybe someone will tell me more.