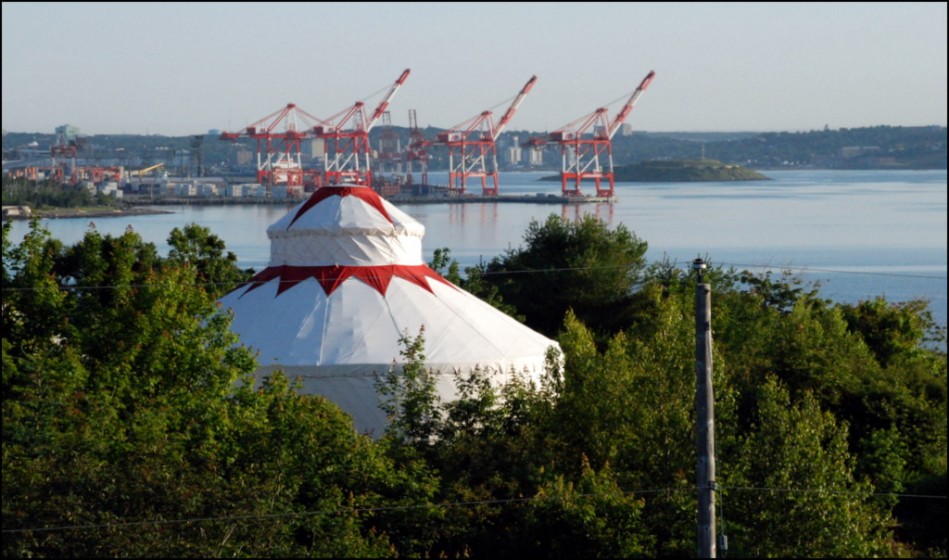 News is so slow in the summer.  Watching the news on TV at supper time I could feel the pain of reporters as they stretched non- existent stories by interviewing people who confirmed there was no story.  In the blog world,  my posts don’t require much news and are often just  based around what  images I happen to find on my little point and shoot camera.

Today the fun starts with a couple of wedding yurts that were erected across the road for a neighbourhood wedding. What pretty structures.  (Congratulations Ellen and Davey!) 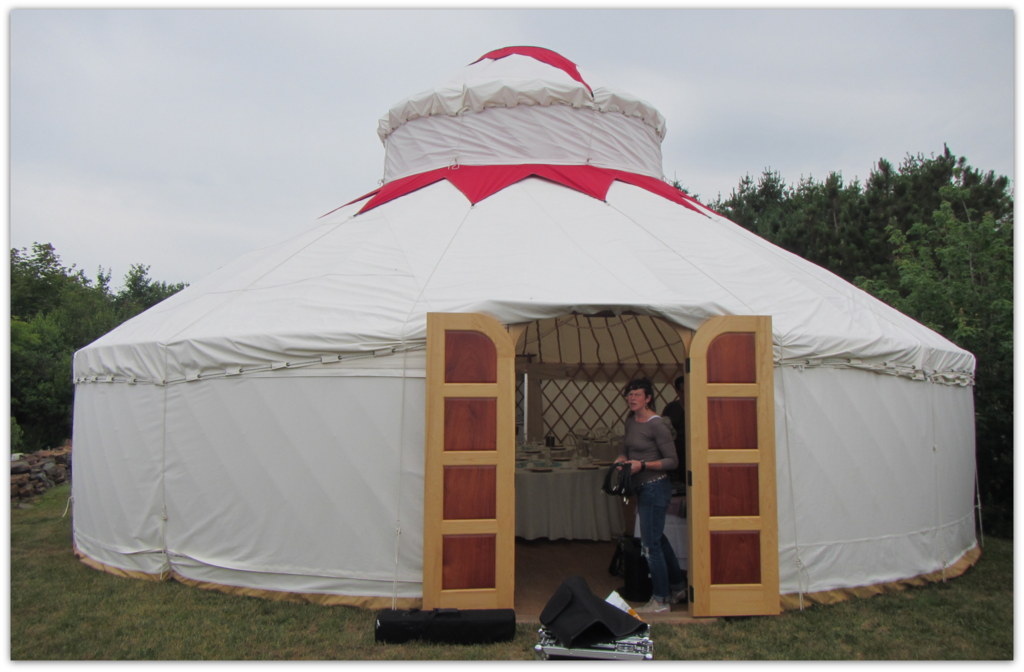 The ceilings of the yurts  are a web of wooden poles and trellises.  I felt they had a connection with the wooden ceiling grid in the gallery at the NS Archives where we had just seen the Jewish Artists in Atlantic Canada exhibit (there until July 31). 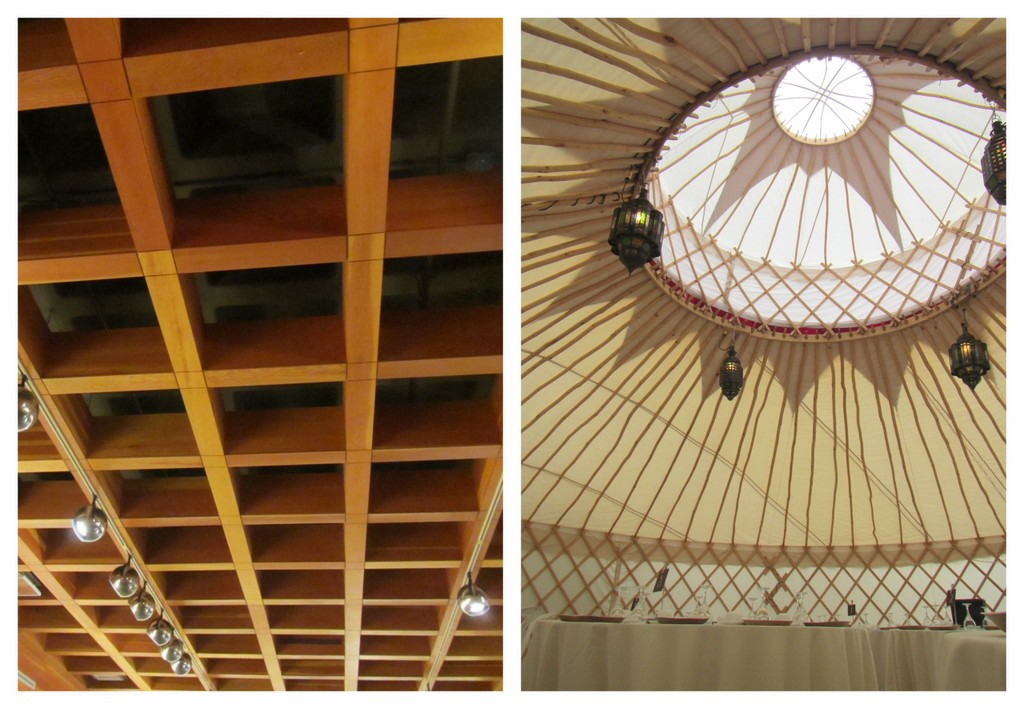 On Sunday we enjoyed a number of events organized by Slow Food NS. First we visited Canaqua Seafoods in Advocate and saw their impressive land based operation for growing salmon, halibut and arctic char.  This feels like the way of the future. 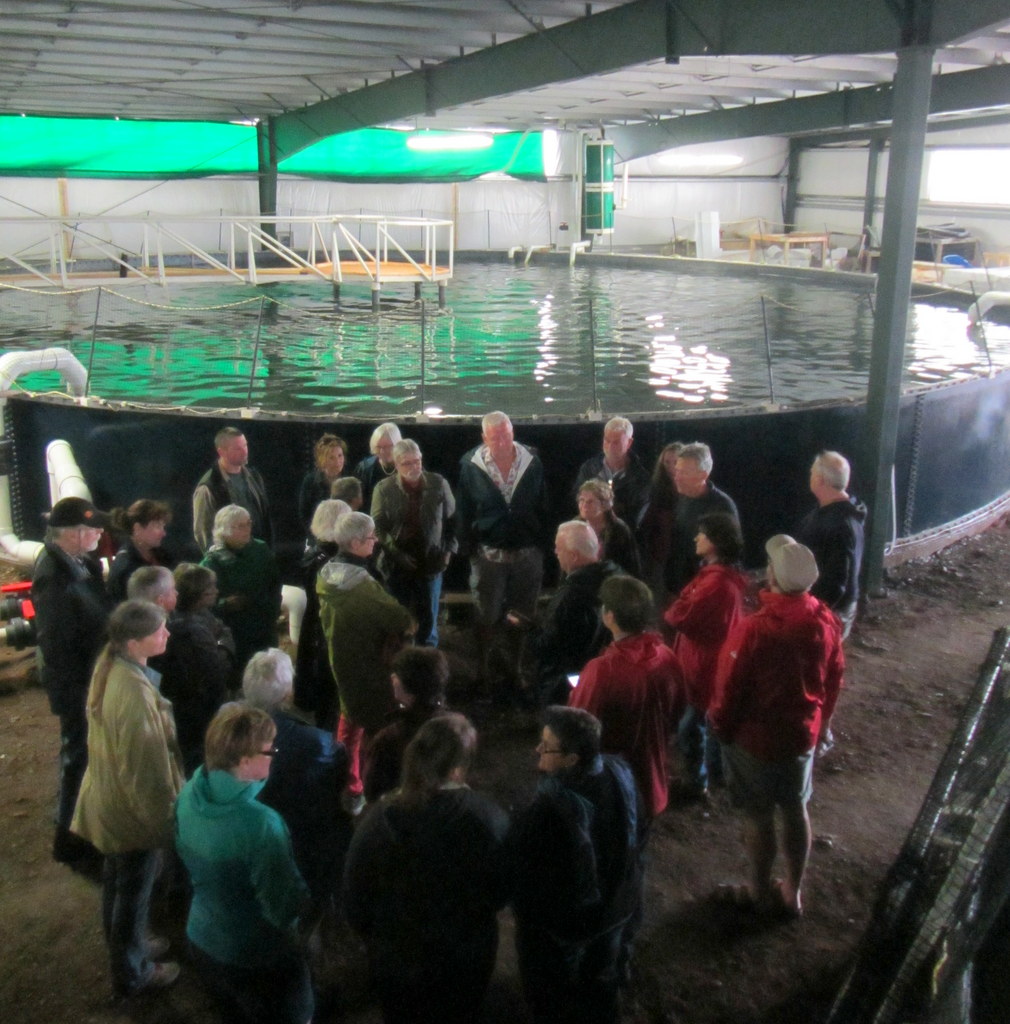 And the covers on some of the fish tanks reminded me of the yurts we had left back in our cove. 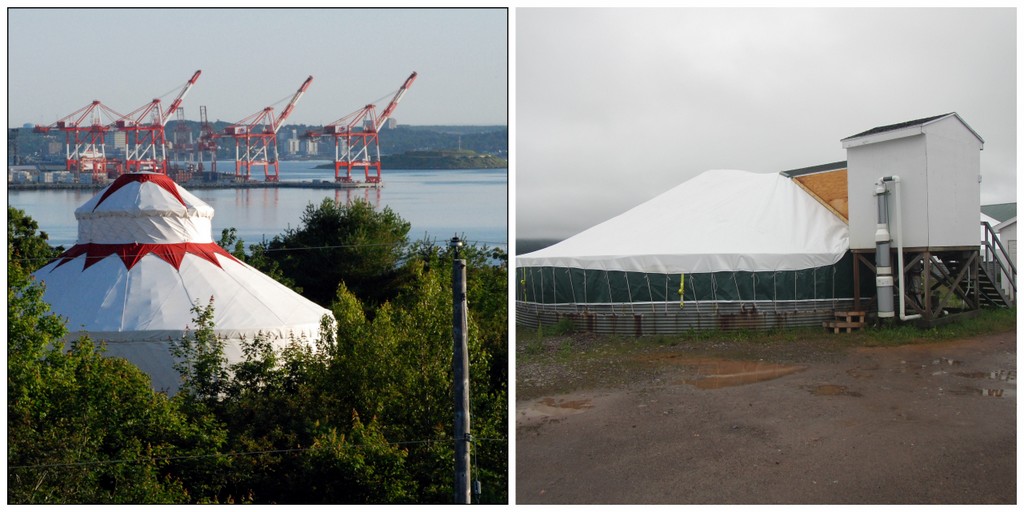 At Canaqua there are two rows of huge fish tanks each with a little building for storing feed and equipment.  These reminded me of the little buildings on wheels that were common at British seaside resorts in the 19th century. Known as bathing machines, they could be wheeled right into the sea and modest Victorian beach-goers could change into their swimming costume  and descend the steps directly into the water. 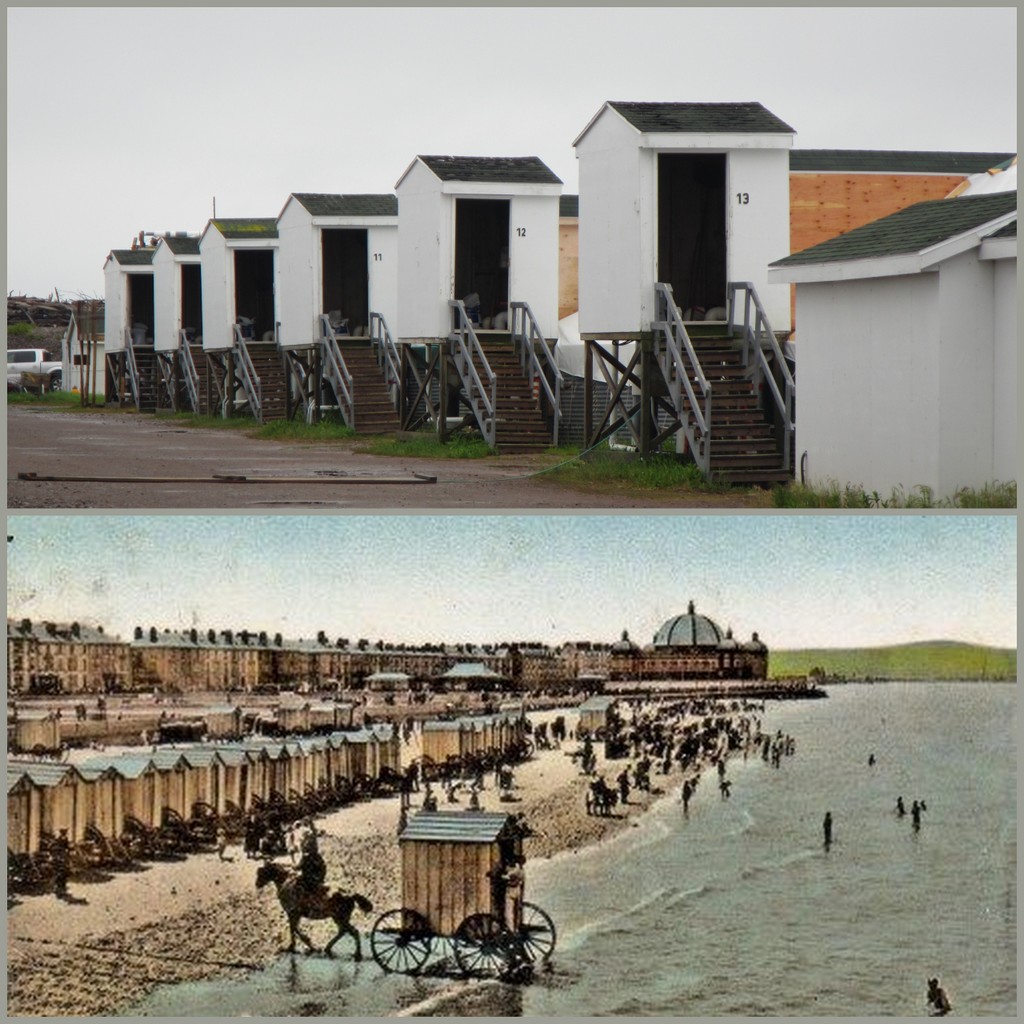 After viewing tons (really tons) of swimming seafood, the group went to eat at the brilliant Wild Caraway restaurant.  Here is a view looking from the driftwood lined shore at Aquacan,  over a saltmarsh to the community of Advocate. The restaurant is near the large white church.  Last year we planned a drive to Quebec so it started with a meal at Wild Caraway. It is that special. 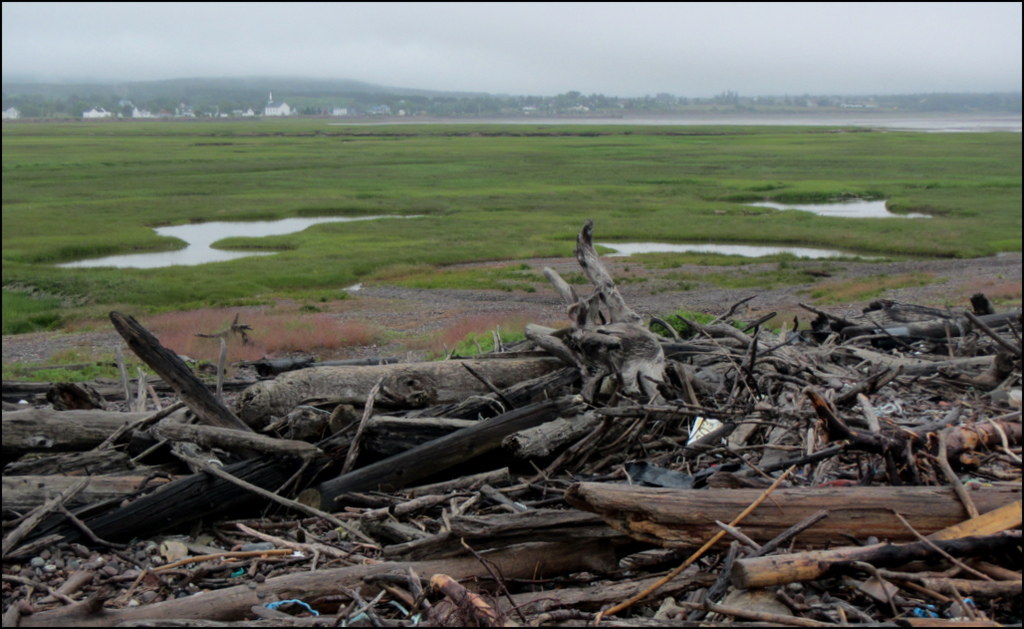 The meal on Sunday included char from Aquacan and salad from Broad Fork Farm, that we visited after lunch. I always enjoy the old stenciled wall decoration in the hall at Wild Caraway and was enchanted to see some painted “wood grain ” at Broad Fork Farm. Exciting and rare to see decorative, painted surfaces that have survived from earlier times. 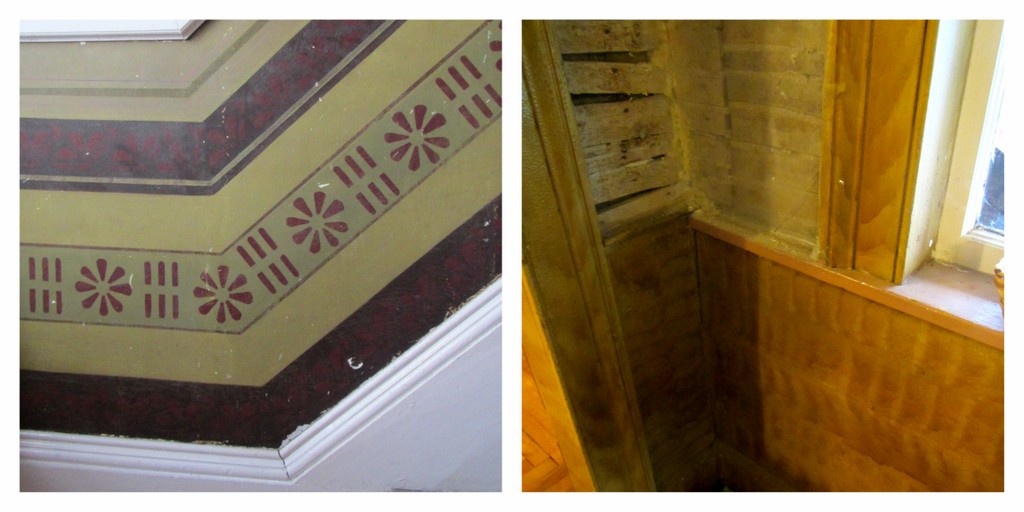 Shannon and Bryan are the young farmers who grow the organic vegetables and flowers at Broad Fork in River Hebert.  It was fascinating to hear how they plan and tend their gardens and their strategies for producing the tastiest plants.

On the farm I noticed a 200 year old, hand wrought latch on the door to the original house (now a back porch). This paired nicely with the latch on the walk-in cold storage made out of a repurposed wrench. 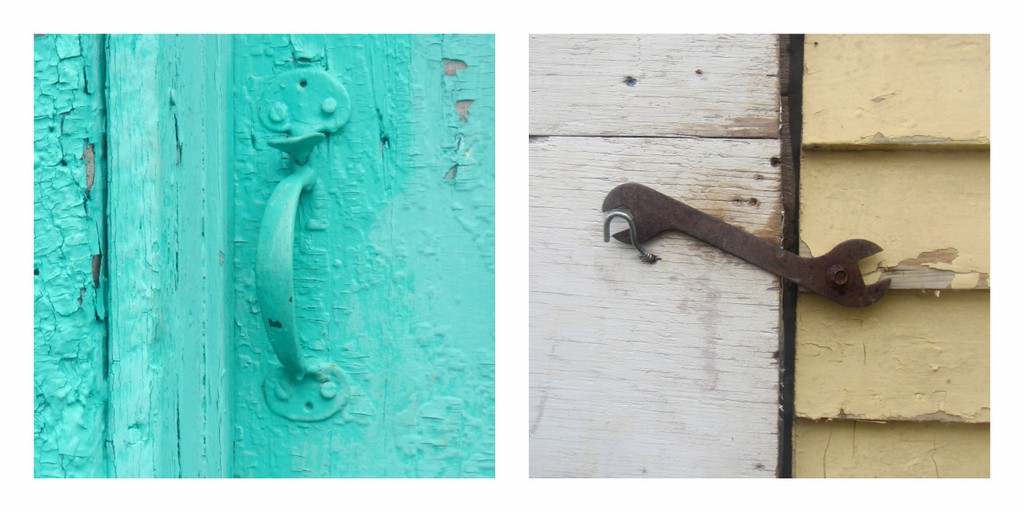 So to be perfectly clear:  Slow Food is not about using the slow cooker your mother got as a wedding present.  Look at the website and learn about Good, Clean and Fair. 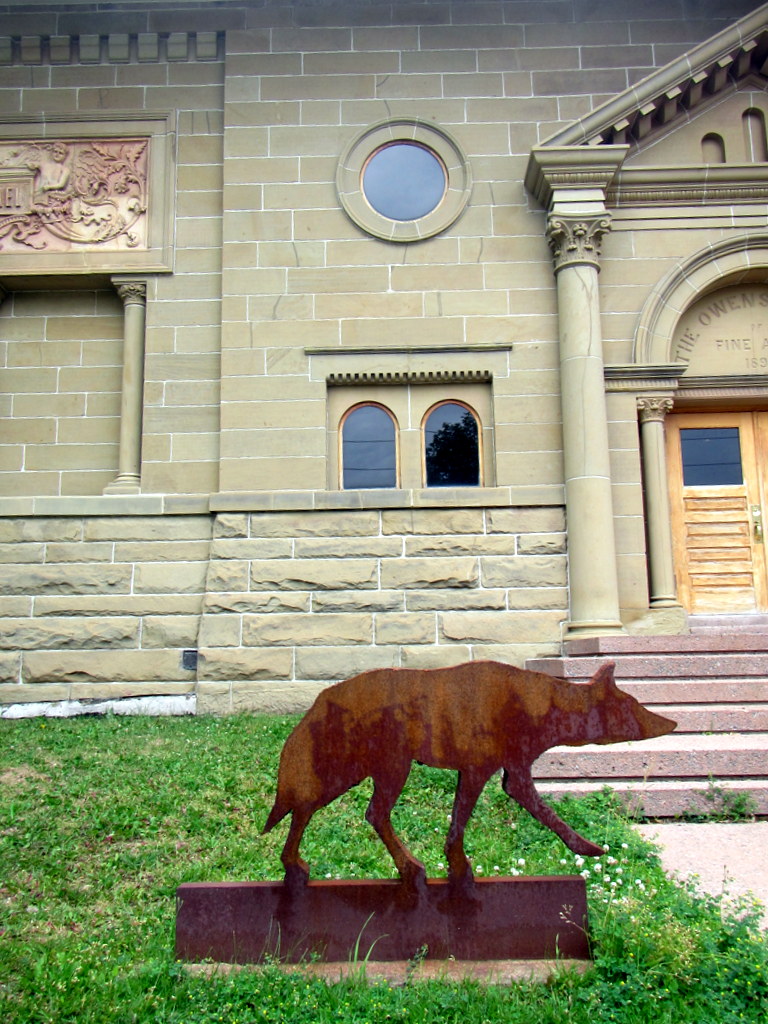