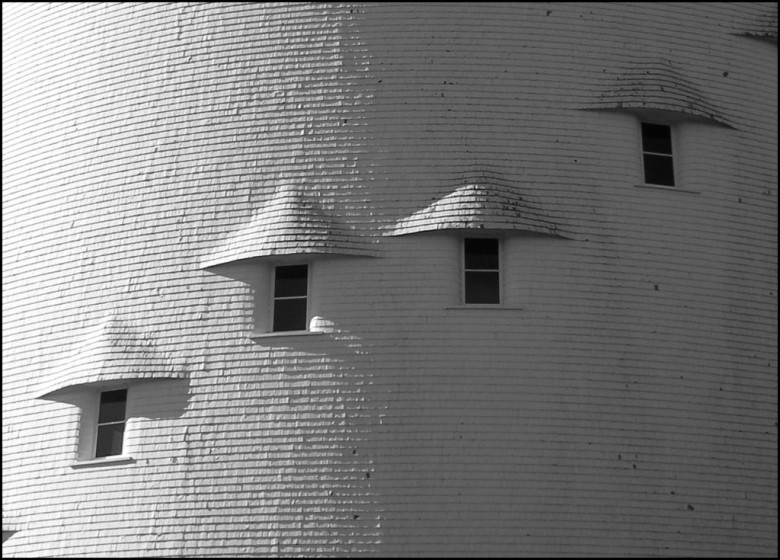 I’ve been saying how much I like the 1913  Robie Street Reservoir and my Halifax Bloggers colleague Peter Ziobrowski has posted a great construction history of the building. Amazing how derelict it looked in 1945 before receiving a new roof.

All this talk made me remember a surprising reservoir structure we happened upon in Bangor Maine a few years back.  We had decided to see what it was like to stay overnight in downtown Bangor (not completely easy to arrange). The next morning we did a little exploring before setting out on the road again. Bangor was a thriving lumber town in the 19th century and we expected to see some nice Italianate style villas as we drove up to the high point in the city.  As we were noticing buildings we realized we were in front of Stephen King’s house, recognized by its famous wrought iron cobweb gate and bat finial gate posts. That was neat and as we continued around a corner there was a huge shingled tower topped by a colonnaded gallery  and a conical roof. It was not immediately clear what it was but conveniently there was a plaque (99% Invisible fans know you READ the plaque). From the plaque we learned that this was the Thomas Hill Standpipe;  built in 1897 and continues to provide water storage and regulate water pressure for Bangor. The water is contained in a riveted steel tank (75 feet in diameter and 50 feet tall). This is surrounded by a shingled, wooden jacket. A 100 step staircase leads up to the observation gallery.

I was most charmed by the little eyebrows over windows that express the route of the staircase – very much part of the Shingle Style that was popular at that moment (220,00 cedar shingles used said the plaque). These days the observation gallery is open four days a year, one day each season.  Images on the internet show that the views are spectacular- it would be interesting to coordinate a trip with an open day.

This made me think about our Robie Street reservoir again, built 16 years later but without a public component to the building program even though it was at the highest point in the city.  Ours is all about new material (concrete) while in Bangor the engineering was concealed behind good taste. Perhaps our reservoir would have had different styling if it was not located in the northern outskirts of town. There is a fascinating c1921 aerial  photo from the Nova Scotia Archives site.  It shows how much has been rebuilt after the 1917 Explosion and that the reservoir is still rather isolated in the upper left (didn’t the Hydrostone bring order). I encourage you to visit the Archives site to zoom  the high resolution version of this photo.  Look for Rockhead Prison in the upper right.

I shouldn’t be jealous of Bangor because of course Halifax did get an observation tower in 1912,  just a year before Robie Street Reservoir was built:  the Memorial Tower in Fleming Park.  How much water do you think that thing would hold?