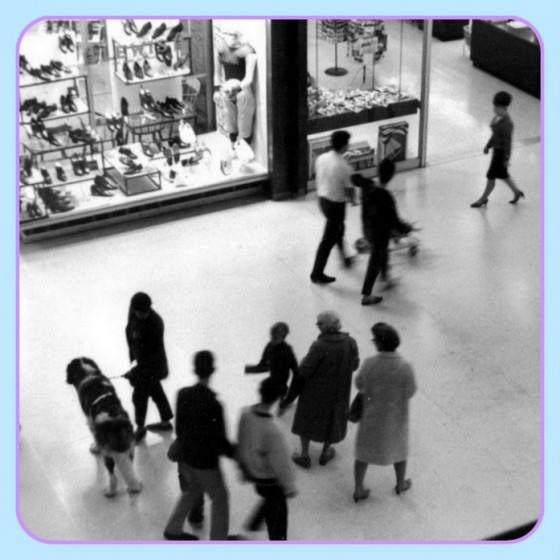 Noticed that the Halifax Shopping Centre announced plans for some BIG renovations. This felt like the moment to trot out my snapshots of the mall in its original form. The Centre opened in 1962 and my photos were taken about three years later.

It is hard to imagine that folks were excited about the pre-classic stage of shopping centres . Today we would call them strip malls,. The first around here  was  built in Dartmouth across from the new MacDonald bridge. I guess this was in the later 50s.  Bayers Road came next, another strip on the then edge of town.  For years people from the country who were frightened to drive downtown would park at the Bayers Road Shopping Centre and take a bus into town.

The opening of the Halifax Shopping Centre on September 11, 1962 marked the beginning of the classic period, our first enclosed mall.  And since the anchor store, Eaton’s, had abandoned the downtown it probably marks the tipping point in the fall of Barrington Street.

The antique car in my photo is in front of show windows for Eaton’s and the woman is about to enter the main entrance to the Mall (Mumford Road side). The diamond pattern wall treatment feels new again. The colour image is a concept sketch for a new entrance. Waiting for the bus has not improved in the last fifty years. Here is the stop on the Bayers Road side of the mall. The original mall only had one level of shopping . There was parking and some offices on the second level.  An exterior covered walkway ran along this level. The marvel and the novelty of the mall was being enclosed.  The internet says that 27,000 people visited opening day.  When I took pictures it was because of my desire to experience modernity. All my pictures are from the mezzanine level, the lone, 18 year old observer. The colour image is a concept for the new daylighted mall. The view from the roof looking west-ish records a new urban form for Halifax: the large surface parking lot and single age housing  marching off into the distance.  The children surrounded by asphalt were, of course, too perfect. On the other side of Mumford Road  was an allée of trees that was connected to a long gone building (an orphanage?). Today the much despised (by me) Mumford Bus Terminal is more or less in this location.   You can see the Eaton’s end of the Mall across the road.  I didn’t know anything about the area it just seemed to make an interesting picture. When I shared the image on  Facebook a while ago there was a wonderful string of comments . People knew it as kids, called it the Bowery, drank there, carved initials in a tree, had a friend who fell out of a tree and broke his arm. For me the image has been re-energized and  enriched.