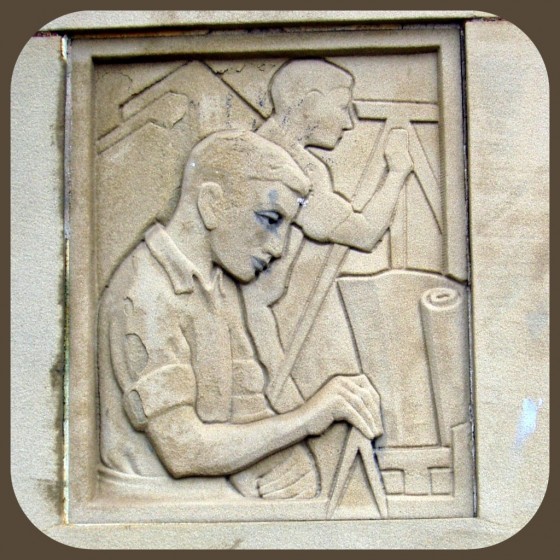 Recently I posted a blog about working women around Halifax. The women were statues and bas-reliefs doing things like pouring water or supporting a cornice. A couple of panels from Queen Elizabeth High School were of particular interest because they portrayed young women in stereotypical occupations (spinning and drama). For this post my first thought was to just show you the QEH panels of men’s work but it looks like I’ll range a little further.

The images of young men that were at entrances to my high school included young men playing hockey, experiencing literature, and engineering. (I couldn’t resist leaving in the swell little helicopter stencil ). There were 4 men panels and 2 women.

There was also a chemist. You will get a sense of my deep thinking when I tell you that high school chemistry brings Walter White to mind. Across the street from QEH at the Vocational School, two large sandstone panels flanked the front doors. Dory fisherman and coal miner seem like strange professions to be modeling for our urban students. The bas-reliefs from both schools date from the late 1940s; post war optimism. Getting away from the schools, here are some manly keystones and bosses. These gents on St David’s represent unhappy historical figures. Across Spring Garden on the 1859 Court House buddy is rocking an amazing leafy beard and some ropy brows. In Holy Cross Cemetery there is this sweet fireman blowing his horn for the last time.  It is on a zinc marker for a fireman who died on vacation in Boston in the 1880s. This week we are particularly aware of our working men who went to war.  This cast iron figure on a fountain in the Public Gardens commemorates our “citizen soldiers’ who fought in the Boer War. Around town there are a number of statues of what we referred to in the museum as “dead white men.” They are nice objects but the men don’t really fit my definition of “working.”  I’ll make an exception for Walter Scott who I imagine is just taking a break from writing Ivanhoe or Rob Roy to have a smoke. I’m fascinated with the idea of “urban ritual.”  Giving Walter a butt qualifies as a ritual from my point of view.  I’ve been performing this little gesture for nearly 60 years – started in the 50s on the Saturday morning walk to the Children’s Library (children did things on their own in those days). Walter always looks a little more relaxed with a smoke.

As I mentioned I’m not a deep thinker so I’ve got to add that these days Walter reminds me of Russell Crowe.