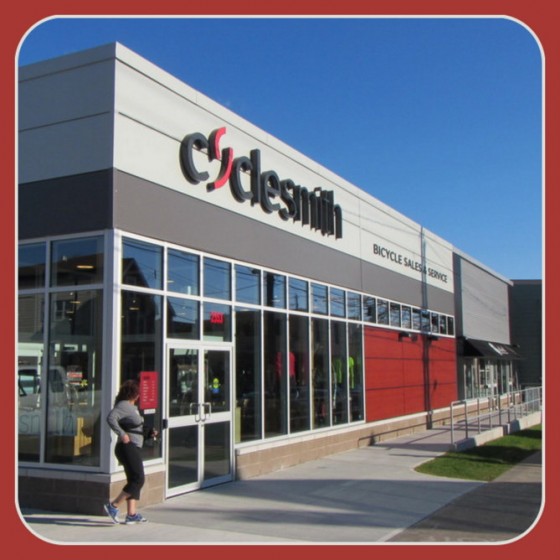 This afternoon we were making a quick stop at Local Source before getting our flu shots (if enough of us get a shot there will be plenty of herd immunity to save the OTHERS). Anyway, the new Cyclesmith and Nurtured were looking so shiny and lovely I had to  carefully cross the street and take a picture. I know in terms of design this is not the new library but it is a gift to the street by a structure that has been resolutely mooning the street for decades. Let me remind you of what it looked like before. This was a building that always felt like an insult. And it was.  Inside was a perfectly reasonable liquor store but because of the location no one appeared to care about the negativity it added to the streetscape and community.  I whined (silently) about this for years but when I saw the proposal for the redevelopment I despaired. The concept drawing posted on the site showed a sad little suburban strip mall that continued to turn its back to the street. The concept did include an expensive mature tree. Eventually the new liquor store was built and felt OK (there is a lot of geometry going on in that facade and the expensive tree is missed ), but the rest of the site languished. There was a pictogram in a window of the abandoned section that said it all . Over the last few months it became clear that plans had changed; the shop fronts moved to the street and we smiled to see new tenants that matched the changing character of Agricola.  I think of it as a hipster trifecta: bicycles, babies and booze.

I know nothing of the history of this development , only what “they ” have chosen to communicate to me as someone walking by in the street.  Lovely that the signal has changed.  Epic save.