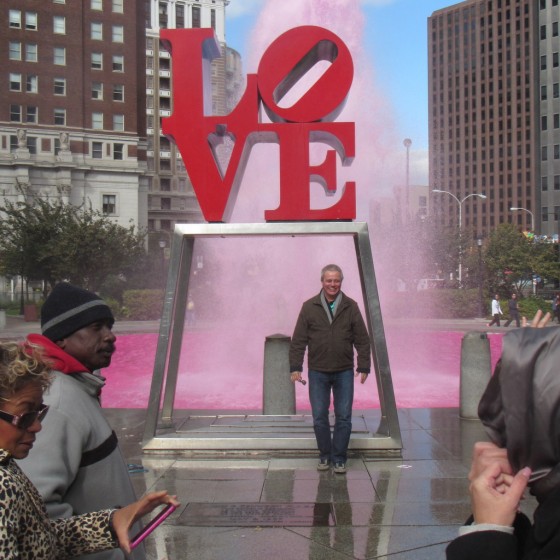 This week we spent a pleasant couple days in Philadelphia walking a very walkable city. Have you visited?  It was our first time in living memory and I thought you might like to see some things that attracted our attention.

First, it is very easy to get there with an early morning direct morning flight from YHZ that got us on the ground, and only slightly dazed,  shortly after 8:00 am local time. The real reason for our trip was to attend a garden symposium and we were quickly in the countryside experiencing  many landscapes: some very formal and others that were contrived to look uncontrived. When we got to Philadelphia it was a pleasure to see what good architecture there was from all periods.  City Hall is the striking centre of the city with William Penn standing above all (strangely no matter where we walked he always seemed to be facing the opposite direction). As we wandered the the streets there were many visual gifts that made it clear we were in a confident, stylish urban setting. Philadelphia has huge murals everywhere on blank walls. I’m not always a fan but many of these seemed particularly successful because they used a palette of colours from the surrounding architecture.    Here is a trompe l’oeil example that is as good as I’ve ever seen. The Barnes Foundation  is a destination  building and art collection.  It has been open for about a year and a half in a strange new building.  The  collection (worth an estimated 25 billion dollars)  was assembled by a very wealthy drug manufacturer with very particular ideas. He amassed a huge collection of impressionist paintings at the beginning of the last century  and installed them in tight packed arrangements  interspersed with antique wrought iron hinges and lock parts.  The interior spaces from his original gallery have been recreated in the new building.  There are timed tickets with 250 people allowed in at once.  For us it was not the best way to experience art and we never need to see another Renoir nude bathing painting. (In the reflecting pools outside fallen leaves were naturally  forming into Andy Goldsworthy-esqe assemblages). We had a  more satisfying art experience at the Philadelphia Museum of Art.  It is in striking classical buildings at the end of a long ceremonial boulevard – remember this is where Rocky runs up the steps and waves his arms in the air.   Rocky’s view was over a great equestrian statue of Washington, back to City Hall. The exterior of the museum is wonderfully restored. It was particularly fun to see the pediment in one of the wings coloured as they were in ancient Greece. There are a couple of architectural treasures in Philadelphia that I have wanted to see for decades.  The first was the Fairmount Water Works built in the early 1800s to pump river water to a reservoir.  The industrial equipment was concealed in classical temples and the site became an immediate tourist attraction.  Today the Museum of Art sits on the reservoir site above the older buildings. The other site on my life list was Franklin Court where Venturi and Rauch designed an elegant memorial to Benjamin Franklin in 1976.  Franklin’s house and print shop had been demolished in the 19th century so Venturi designed a steel ghost of the buildings over the archaeological site.  It was a very exciting project at the time and is still impressive (even in the rain). A real treat on our last day was the Pennsylvania Academy of the Fine Arts. The amazing 1876 building is the ultimate in Victorian decoration.  It was considered over the top at the time and for much of the time since.  Today we marvel at the lavish detail and the art collection is top notch too.  Not a bad place to get out of the rain.  By the way our membership in the Art Gallery of Nova Scotia got us in for free! I really could go on and on but I’ve exceeded our attention span. To end here are a couple of superlatives.  The PSFS building is described as a masterpiece and as one of the most important examples of International style architecture in America.  It was built in 1932 and looks absolutely fresh and contemporary today.  And we encountered many pieces of bold public  sculpture.  Here is the 45 foot tall Claes Oldenburg Clothespin made of Corten steel encountered as we exited the subway.