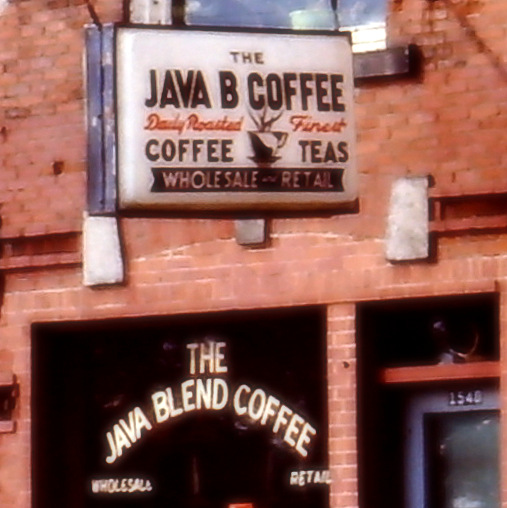 I’ve just been looking at the current issue of Local Connections Halifax and realize I have a couple of images that could be sidebars to several of the stories.

There is a major article on the Stubborn Goat gastropub on Grafton St.  I took a picture of their building around 1980 when it was ending its life as something like a muffler or transmission shop.  I’ve been told it started out as a fire station.

The photo was taken around the time the building was renovated for the Unicorn clothing shop which was moving from their original location where the the Foggy Google is now.  At the time this seemed like a very brave move up the hill. Of course the Unicorn still exists, now in Bishop’s Landing.

The Unicorn renovation brought out the charms of this great building that keeps coming back to life. The cover story of Local Connections is “the Story of Java Blend – Halifax’s  Original Coffee Roasters.” For their sidebar I have a photo of the shop in the mid 1970s. Then it was on Hollis St, on a site near Salter now occupied by the parking garage. It was a sweet little brick building and when they were roasting coffee, smoke would billow out the open door. For a while there was a tiny restaurant in the other half of the building called Cafe Quelque Chose.  Here is a 1979 illustration of the entrance by Roger Hupman, in my mind, another connection to this issue of Connections. Illustrator Emma Fitzgerald is profiled and the content and spirit of her wonderful drawings of the North End remind me of what Roger was up to.   He was part of a wave of artists and craftspeople in the 70s. Here are a couple of post cards he produced. It would be fun to see an article about  or exhibition of his images of Halifax.