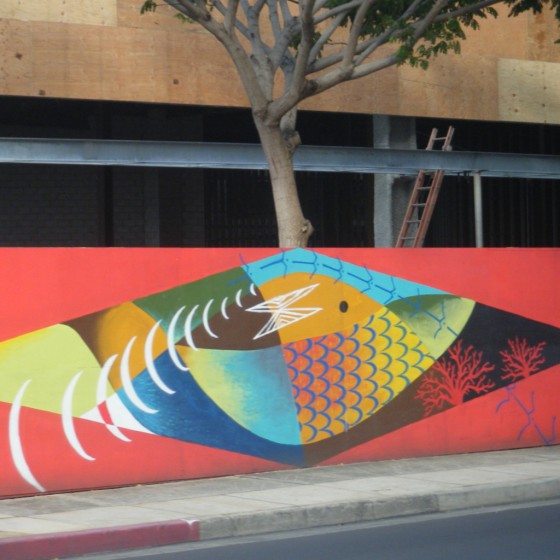 Lots of excitement (one way or another) about the Wonderland of construction cranes downtown. Development is a messy business and being a sensitive type I often wish there was a nicer edge between public space and the turmoil of building. So I was very pleased to read that there will be a wonder-wall built to separate Nova Centre ascendant from the lads and lasses on the terraces of Foggy Goggle (see June issue of Halifax Magazine).

It surprises me there is not a requirement to install a beautiful barrier around every construction site in the downtown (and around every developer’s hole in the urban fabric for that matter).

In the last couple of years, whenever I visit a new city I notice what they do. Here are some examples that attracted my attention.

In Miami Beach I saw a couple of fences wrapped in graphics. One on a high-traffic pedestrian street was simply good quality branding photos for whatever was going in the space. It was the perfect scale and complexity for the situation. From a bus I glimpsed another fence around around a larger site. It was wrapped in a generic image that worked fine for drive-by and with the palms. Isn’t this a knockout in Honolulu. Artwork that appears to be created for the site is already branding the building that is still just structural steel and plywood. Will the building live up to the promise of its construction fence? The gold standard for construction fences in my experience were in Seoul, Korea. What we were seeing there were about 5 metres tall and covered with graphics. They were so architectural in scale you might not even notice there was a construction site. This wall is on a pedestrian mall, and ensured there was no gap in the streetscape. On a larger site there was a stone wall image that was not inspired but it did the job.  We were able to look into the job site and see what a light and simple structure was supporting the wall. So the next time you walk in the downtown and see the mixture of concrete Jersey barriers and chain link that we accept, imagine a story-high wall with images of Maud Lewis kittens or Gravenstein apples. And don’t suggest that your grade six class could paint whales on 4 by 8 sheets of plywood, cause we are sooo beyond that.