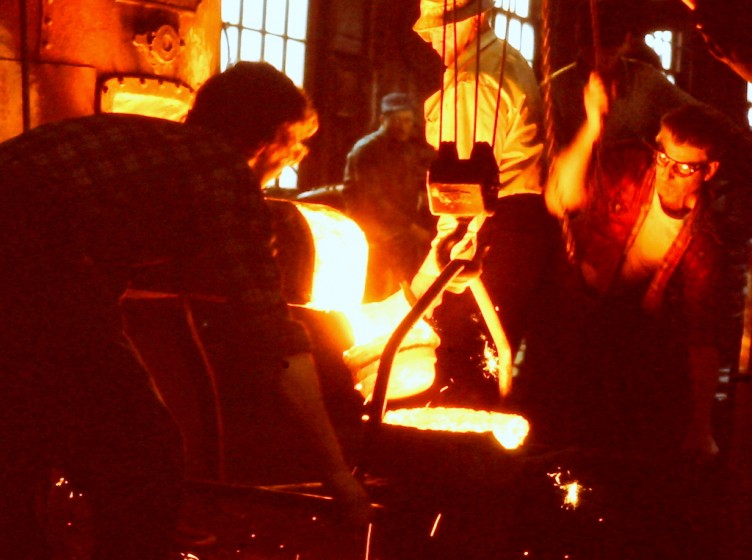 We are very bad at saying goodbye to old buildings. I imagine farewell rituals that involve beating drums, professional mourners brought in to wail, that sort of thing. Recently Lunenburg Industrial Foundry and Engineering decided it was time to demolish their old machine shop and they came up with an appropriate and understandable ritual to honour its passing. A “once in a life-time” Heritage Sale! Cash only. This made me remember a day spent at the Foundry in 1974 observing the iron and aluminum casting process.

The company dates back to the 1890s and originally their major interest was casting and machining metal for use on ships. They were particularly proud of the robust gas engine they designed and produced. This simple type of engine revolutionized the inshore fishing industry (folks would say that all you needed to repair one was a wrench and a hammer).

A view of a small section of the foundry buildings on my 1974 visit. The clerestory windows provided a soft light on the working floor. A day at the foundry began with preparing the sand moulds. An owl pattern is still in the top half of the sand mould and will soon be removed. The worker is making channels in the sand of the bottom half so molten aluminum can evenly fill the owl-shaped cavity. Here a mould is being prepared for a set of cast iron stove legs. As the morning progressed the sand-covered casting floor filled with completed mould boxes. While the moulds were being prepared the iron was heated and ultimately melted in a tall cupola furnace. What I witnessed was identical to this 19th-century illustration of a British foundry. And poured into the moulds. When the metal had cooled sufficiently the sand moulds were broken open to expose the castings. Here the hot owl gets sand knocked off. The channels on either side of the owl will be cut away as part of the finishing process. If you follow my blog you’ll realize that I’m a big fan of decorative cast iron so this foundry visit was a very special day. The Lunenburg Foundry stopped casting iron in the 1980s.

Folks at the foundry made sure we saw an amazing example of a mould maker’s skill. To complete his apprenticeship decades before, buddy had been given an ordinary cup, saucer and teaspoon and told to use them as the patterns to create a single mould. My memory is it took a six part mould and was cast in lead because the metal was “livelier.”