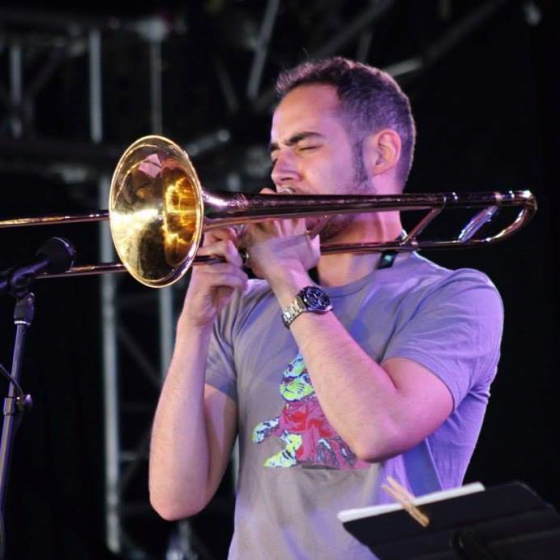 July 2, 2015 Meghan Hubley
Hello theatre — music — sex-ed — art fans! Welcome to another round of Post-Haste Presence!  That’s post-haste – with all possible speed. These are short q&a’s with artists to promote their fast-approaching  projects.  With the third incarnation of Solo-icious opening FRIDAY NIGHT, (which you can read more about here) I’m hoping to share with you some thoughts from a few performers.  First up:  composer Andrew Jackson who will be performing in the first of the two night festival:

1.  In five sentences or less, explain to us what you will be performing at Solo-icious?

I will be doing a performance of solo trombone with electronic effects. This will be an improvised set where I will essentially be creating an entirely new piece on the spot!

2.  What inspired you to pursue your field of expertise?

I have been playing music since I was very young and have played trombone for 14 years. I was never really into sports, as much as I tried, but once I began playing trombone, I seemed to be good at it! At first it was just something I did in school, but once I started hearing jazz and other non-traditional types of music I was hooked! I always had really great teachers growing up that pushed me to keep getting better.

3.  What does “performance” mean to you?

I think it is all about showing people who you are, what’s at your core through a medium. My goal when performing is to make people think a little bit differently about how they perceive the world.

The best part of solo work is that you are able to convey a very pure, personal idea without diluting or compromising for the another artist’s sake. The flip side of this is that there may be great ideas you miss out on because there is no other influence. Also, if it train wrecks, it’s all on you!!

5.  What are you looking forward to the most about the Solo-icious Festival?

I am most excited to take part in a festival that involves people from so many different artistic mediums. I am very interested in how they complement each other.