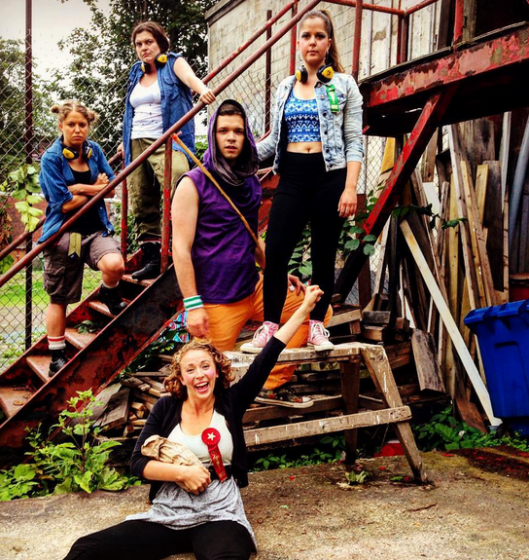 I was feeling conflicted about Angels & Heroes production of  girls! girls! girls!  before seeing it — mega-intrigued by both script and set (back lot of the Bus Stop Theatre),  excited to see this constellation of actors working with director Richie Wilcox,  but I was also harboring a strange swirl of resistance and envy upon learning about the wireless headphone element each audience member would participate in.  But more about that later…

The play, written by Montreal-based playwright Greg MacArthur, is a response to the 1997 murder of BC teen Reena Virk, and the Columbine shootings.  A gang of teenage wastrels head out into the night seeking revenge on Missy (Erin Johnson),  who has beaten Splitz (Maggie Hammel) in an all-important provincial gymnastics competition.  Jam and Puss (Keelin Jack and Gillian Clark) drag Missy to their lair to present Splitz with the 1st place red ribbon she so desires, and a chance to torture the chick who ‘stole’ it from her.  Meanwhile their pal Li’l Bucky (Henricus Gielis), also searching for the red ribbon,  waxes poetic after experiencing multiple assaults before returning to his gal pals to take part in the play’s horrific conclusion.

girls! girls! girls!  has a very ~Traditional Canadian Theatre~ feel to it (twangy western Ontario speak, monologues bursting with grim imagery),  sort of a slam-poet slash Judith Thompson slash Joss Whedon thing that’s a perfect flavor for someone like me who grew up with Buffy and Crackwalker  simultaneously.  However the overall style is modern enough in its heightened way that you could Insta the promo-shots and caption them “squad lookin’ fresh (bow&arrow emoji)” no problem.   It took a while for me to feel welcomed into the MacArthur poetics, but when Clark hits her first chunk of text with deft prowess she puts the audience at auditory ease.

There is so much in this play and this inventive production to cheer for, and so many questions too.  I dug the hip jargon of the piece, and the nuanced, queer(ish) relationship of Jam and Puss, and I especially loved the pivot of Jam’s emotional journey:  the last monologue is so candidly performed by Jack, and is the most genuinely felt of the whole show.  It’s truly one of the most brave moments I’ve seen on-stage to date.  I felt a little dejected at the curtain call, as girls! girls! girls! final word seems to be that of hopelessness — beyond good writing and cool ‘big idea’ conceits in the staging I wasn’t sure why I just watched what I watched.  But maybe executing dream roles and dream-designs are reason enough to put on a play and I need to chill out?  Perhaps what we ‘learn’ (to use that word) comes from the back stories behind all the delinquents’ monologues:  statements about disappointing parents and a crummy town that really messed the kids up/let them down.  We are witnessing the effects  of disengaged adults leading to the the demise of our youth  (but I don’t know if I took that away all on my own — I’m sort of extrapolating from the description on the Facebook event).

And as much as I was psyched to wear a bad-ass set of headphones during a play, I felt at times emotionally manipulated by the music.   It’s something I think about often – how to incorporate my fave songs into my writing – and I am obsessed with making pre-show playlists for any show I work on (that’s where the envy came in, dang it).  However, when I get stuck on thinking about putting say my favorite  Alvvays tune or old Bloc Party song right into my script, I usually turn it into an exercise of riding the emotion of the song to put the feelings into the character’s mouth.  I felt a similar (worse) manipulation a few months ago during Off the Leash’s production of MacBeth in which a cellist did the majority of the emotional story-telling to the rhythm of iambic pentameter  (Liz Lemon kind of demonstrates the feeling here, not that I think Shakespeare was to blame for use of cello).

For how short a time the songs play in girls! girls! girls! and how often the audience has to take the headphones on and off and on again, I felt kind of distracted.  Maybe if we had left them on the whole time I’d feel differently, or if they played over a speaker in a traditional theatre, but even then I’m not sure.  In any case it has me, as many modern productions do, questioning the emotional relevance of trendy technology being used in plays.  I also get that ~ the youth these days~ are ~modern~ and use “the” “technology,” but that didn’t seem to be the point of this particular group of teens in the least.

Anyway I have rambled on about some nit-picky thoughts.  It’s rainy and my brain is a scattery sleep-deprived mess so take this blog post or leave it I guess!

Halifax is lucky to have Wilcox back doing some solid work with a serious and sportive script.  The cast is fresh, and their work is brave.  If you’re on the fence about going tonight in the rain, you’ll be gifted a poncho and it’s worth the adventure.  Sunday night is closing, so it’s not too late to see this thought-provoking piece.