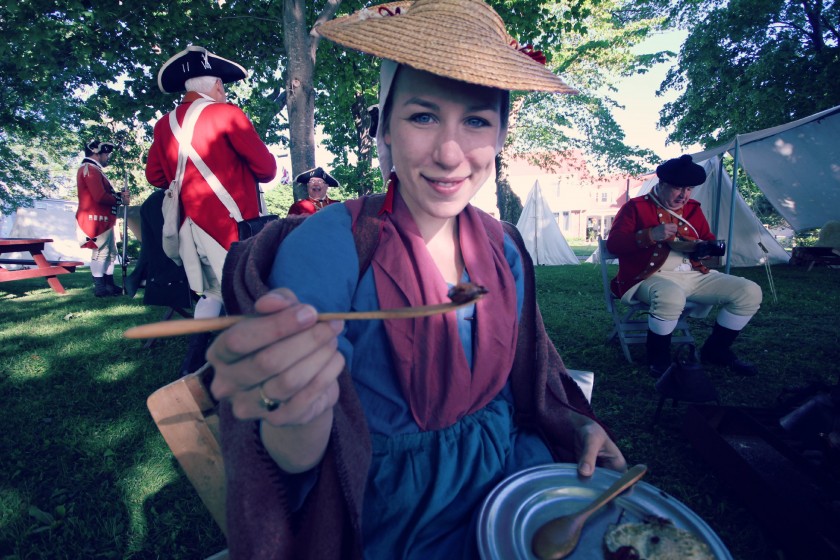 Since our first Privateer Days experience in 2013, I’ve been telling friends and (many) strangers about how much I love this annual Liverpool festival ad nauseum. So when Brian Fralic, one of the festival organizers, called to see if we wanted to attend this year’s event, I practically squealed my yes into the phone.

And then he said the nine words my inner child was dying to hear.

“Do you want to get dressed up in costume?”

We arrived in Liverpool last Friday at 7 pm and immediately launched into a lesson in 1780s dressing.“This was your underwear,” Gail tells us, holding up a linen shift for Drew and a lighter shift for me. “There were no separate britches, men just kind of tucked everything in and around.”I almost topple over as Gail expertly squeezes me into a corset. Then come the layers.

“Women wore a minimum of two petticoats,” she says, as she hands me layer after layer of linen fabric. She expertly folds and pins and tucks until I looked like a proper 1780s woman. Drew looks handsome in his getup, and I soon learn that everything is better in costume.  We have a ball wandering the festival grounds perfectly dressed for the occasion.

We aren’t the only ones. Privateer days is like a better version of Halloween. It is totally acceptable to spend the weekend dressed in pirate or privateer style, whether you’re on festival grounds or in the grocery store. We watch the sun set on the Liverpool waterfront over shared chips from one of the chip trucks then head back to camp for some star gazing and eventually a night in the straw (read more about that HERE). Tea in a metal mug gets REALLY hot! We have breakfast in the encampment and pack up our “21st century gear” before festival goers start arriving at 8. In the encampment, guests can get a sense of a day in the life of an 18th century soldier. Brian also let us ride in the parade in our new, fancy outfits. After the parade we head back to the festival grounds. One of the things I love the most last year and again this year is just roaming around. There is lots to do on-site, especially for kids, and we have a chance to shop, snack, log roll, ride a horse drawn wagon, watch prohibition style rum running, and try a stand up paddle board. Our favourite activity last year was logrolling with Darren Hudson’s Lumberjack School, and this year he tops our list again with ax throwing. Darren shows us the ropes… And finally I step up to the plate. Darren tells me to “become one with the ax”. Everyone looks a little nervous… Privateer Days serves up an eclectic mix of musicians from noon until late each day of the festival. There are live artists performing everything from folk to country to mowtown to classical, including the 20+ piece Mersey Band playing selections from Beatles to Beethoven.  There are more than 40 performances in three days, with headliners Asia and Nu Groove ensuring people get to dance.

Privateer Days has a lot of great things going for it. It is easily the most enjoyable and engaging history lesson I’ve had to date. And while we LOVE Privateer Days as an event, part of that love stems from its location. Liverpool is home to so many great places and people and stories (and beaches and beer and…).The festival is almost entirely volunteer run, save one employee hired for three months. They rely on sponsors and volunteers to put on what is a mostly free, wholly fantastic event. We can’t thank them enough for having us up to help spread the good word the past two years and look forward to sharing our other Liverpool and Privateer tales with you throughout the rest of the week.

Privateer Days made arrangements with local businesses so that we would have a place to stay, food to eat, and gas to get to the festival. As a small local biz looking to highlight as many great experiences as possible we appreciate the support of the Privateer Days committee for helping to keep this project viable and for showing us one heck of a time in Liverpool.