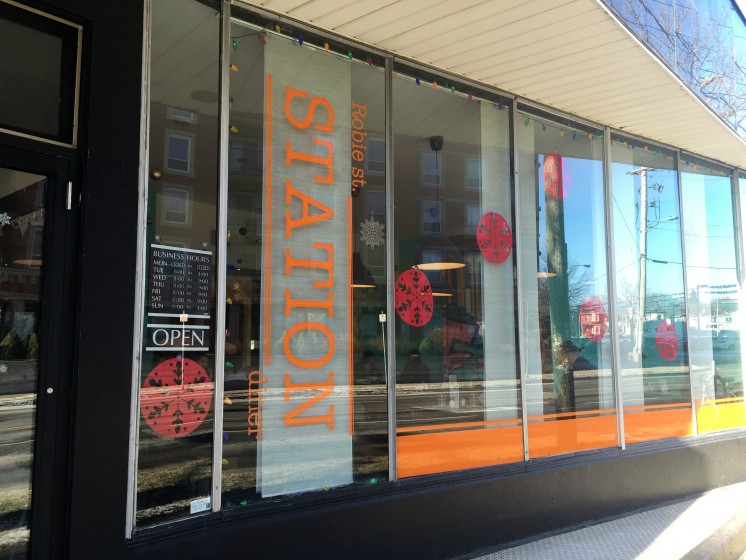 This morning Gillian and I had our first running race of the year, MEC’s Race Series Race 1 at Point Pleasant Park. It was a brisk, cold run, so we stopped into Robie Street Station on the way home to get warmed up. Fans of the legendary Jane’s on the Common will know the location, at the corner of Robie and Cunard across from Halifax’s North Common. Shameful admission: I never got to eat at Jane’s. It was on our list when we did the Chowder Trail a few summers ago but we planned poorly as they weren’t open on Mondays.

Soon after, they shut their doors, and Halifax lamented (though Jane’s daughter has her own highly respected place, Edna’s on Gottingen; and the former chef opened his own spot in Lunenburg, Lincoln Street Food, which is one of our favourite restaurants in the province). Gillian asked what the stand-out dish was. The answer was a toss-up between the Western and the Cilbir. Upon further reflection, though, our waiter told us the Cilbir is their most unique pick. Sold.

I ordered The Remedy, a classic two eggs, choice of bacon, pulled pork or fruit, home fries and a biscuit. My eggs over easy were just as runny as I like them to sop up yolk with the home fries, which were perfectly crisp on the outside. There was more bacon than I knew what to do with. Often you’ll get three, maybe four, slices of bacon on plates like this. Robie Street Station had a veritable mound of bacon. Honestly, if I had have known there’d be that much, I would have asked for a half order of the bacon and replaced the rest with portions of the alternatives, pulled pork or fruit (I don’t actually know if they’d do that, but that’s what I’d like). The homestyle biscuit was very nice, though the preserves were a little runny. The guy at the table next to us ordered The Remedy after I did, but replaced his biscuit with an extra side. I feel he erred here. Overall, at $11, The Remedy is a good breakfast platter, portioned for those with ambitious appetites.

However, the Cilbir is clearly the winning option. I ended up dipping half of my home fries in the garlicky Greek yogurt drizzled with chimichurri and chili butter and topped with poached eggs. Ordinarily it comes served with naan bread but Gillian replaced it with roast potatoes. At $12, this will be my go-to when I come back. The staff were friendly and engaging, and gave good recommendations. They also have a lunch menu filled with soups, burgers, sammies and bowls, and they’re licensed.