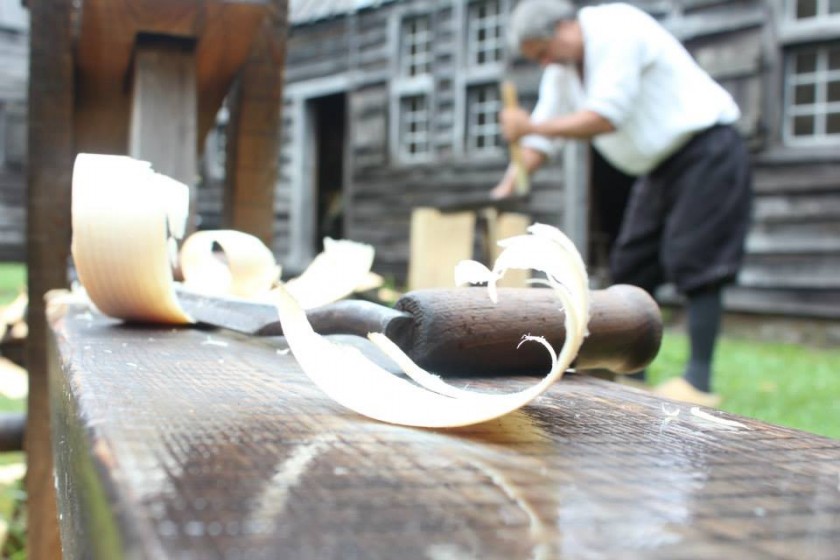 Over 400 years ago, a French cartographer who would become the governor of New France found a port so beautiful, he gave it a name worthy of its majestic views. Port Royal, which feeds into the Bay of Fundy, played an important role in European settlement of the New World, in relations between the French and Mi’kmaq, and in the wars between France and Britain. It is a place that is rich in history. The history has been not only carefully preserved, but reconstructed and brought back to life. Up until the late 1930’s, Parks Canada had focused only on preserving what remained of historical buildings and natural landmarks and landscapes. Port Royal became the first exception to that trend. You see, the original fort at Port Royal was destroyed. It only lasted eight years, before being burned to the ground by the British. Port Royal National Historic Site marked the first time that Parks Canada reconstructed an historic site. They used Samuel de Champlain’s meticulous maps, notes and sketches alongside knowledge of French construction from the same period to replicate the fort’s construction and location as accurately as possible. The fort at Port Royal was built as a contained square block of buildings. It has an open courtyard with a well in the middle. The buildings that surround this courtyard include the blacksmith workshop, kitchen, bakery, storage, dining hall and sleeping quarters for both lower and upper ranked inhabitants. Sleeping quarters for most of the men were in a dormitory upstairs, that included two closed off beds that could be used to quarantine sick men. Blacksmiths were the highest paid staff at Port Royal. Second highest were doctors.

Be sure to have a seat in the dining hall with the pewter dishes and utensils. This is where Champlain began North America’s first social club, l’ordre du bon temps (or the Order of Good Cheer). Many men fell sick and died of scurvy, deprivation and harsh conditions those first couple winters. Champlain wrote that their first winter there lasted from October to April. To fight off the low morale, the society was began to put a focus on feasting and comaraderie between the men,  taking turns competing to host the best dinners. In letters back to France, it is noted that during those dinners they ate better than one could at any fine restaurant in Paris.

To read more keen details and observations about Port Royal, check out this post from fellow Halifax Blogger and keen observer Stephen Archibald.  We always love seeing and hearing his eye for detail about some of the smallest details we’d otherwise miss.

On this trip, we visited Port Royal as part of The Acadian Passport.  You can check out the video we created for this site below:

This National Historic Site plays an important role in telling the story of Acadie. While none of the original inhabitants of Port Royal could be considered Acadians, the space sets the stage for the arrival and fostering of the Acadian people. Season:
The grounds of Port Royal are open to visitors year-round. The fort is seasonal.