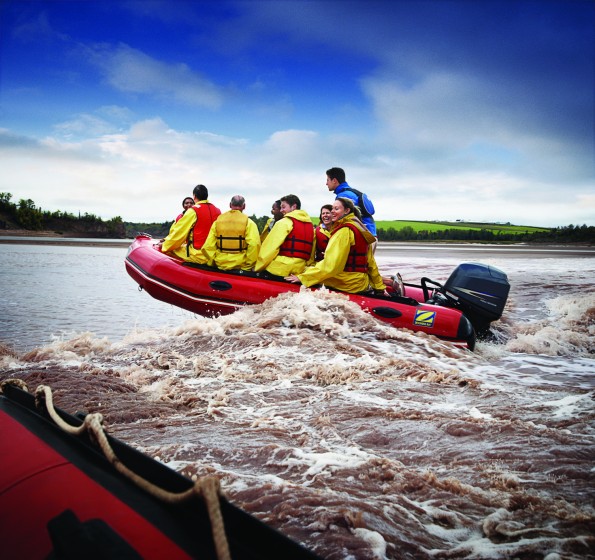 “Take a mental picture of the landscape. In twenty minutes, you won’t recognize it.”

I’m sitting on the side of a zodiac boat on the Shubenacadie River in Nova Scotia. The water is calm and in front of us is a large island of sand with water wrapped around either side. Our guide docks the boat on the sand bar and we hop out.

“In a few minutes, you’ll hear the bore coming,” she says. While I wait, I get to know some of my boat mates, two visitors from Florida. They came to Nova Scotia just to try tidal bore rafting.

“I’ve been planning this trip for a year. I just needed to find a friend to come with me,” she says, gesturing to her friend. She read about the experience in a book and was immediately hooked on the idea of riding the world’s highest tides.

And then, we see it: a white wall of water about two metres high rushing at us from a distance. We hurry back to the boat and hop in.

Within moments our guide is driving head first into the bore. We squeal and cheer as the zodiac crashes through the water wall, soaking us. Behind us the bore continues its twice-daily rush. It creates two clearly defined levels of water, a unique natural wonder.

But that’s just the beginning. The boat rushes forward as the sandbar quickly disappears under the rapidly rising water. Rapids begin to form.

Nova Scotia isn’t the only place to see a tidal bore, but our guide tells us it is the only place to ride the resulting sand rapids. As the water rushes in across the sand bars, large waves form, creating a natural rollercoaster on the water. 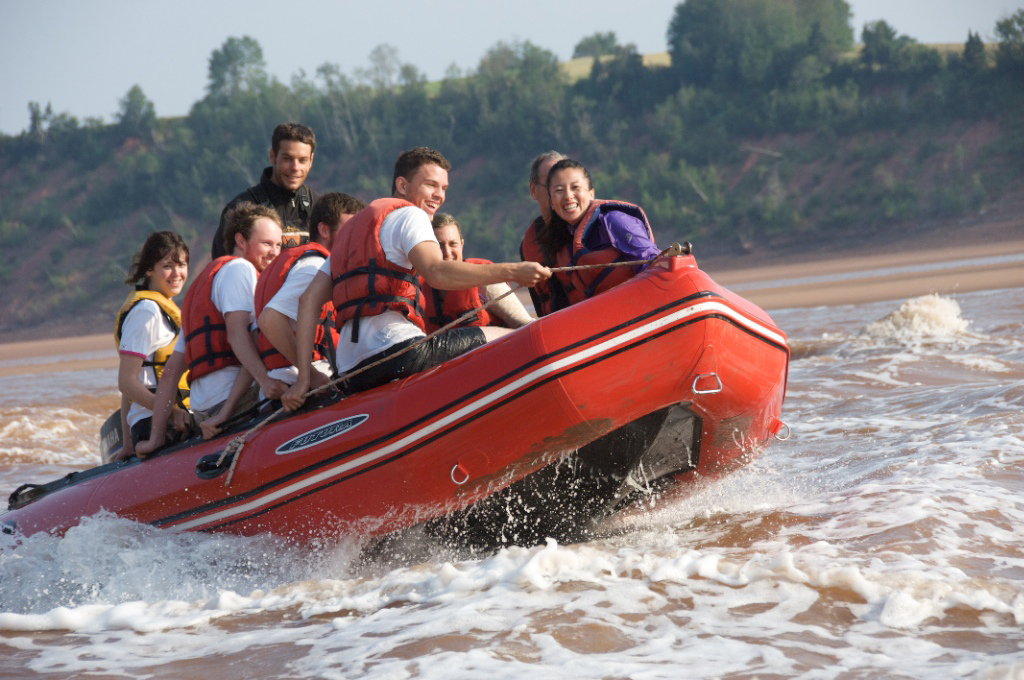 Our guide moves the boat into position and we get ready to hit the rapids. I’m not sure what I expected, but the first run takes my breath away. Our little boat goes seemingly on its nose over the 8ft waves then crashes head first, soaking us and filling our raft with water.

We rise and fall again and again, over the length of what was, just 20 minutes earlier, an empty stretch of sand. Between each run, our host drives our boat along the outskirts of the rapids and back to the start of the course, and each time the waves are larger and more intense.

By the time we head to the second set of rapids I’m soaked and have had more than a little taste of the salty, muddy Fundy waters.

“That was a great warm-up,” our guide says, as we race forward toward a new set of rapids. “This part here we call ‘The Washer’. You’re going to want to really lean into the boat.”

I didn’t think it was possible for the waves to get bigger or more intense than the first stretch, but I was wrong. In The Washer, the waves come at you from every direction, and there are points where our boat is filled to our waists with water.

Just as suddenly as it starts, it is over. The waves calm and we begin the trek back to shore.

“The tide takes just two hours to rush in and ten to drain out,” our guide says.

The bore and the rapids only form for a brief time as the powerful Fundy waters are reversing. The two hour trip felt like 30 minutes, in no small part due to the adrenalin that kicks in as soon as the waves start. There is a longer trip that takes you further down the river and lets you ride the tide longer, where waves get as high as 18 feet.

On the trip back to the dock, it looks like we’re boating past a whole other landscape. Now that the bulk of the adventure is over it’s easier to relax and take in the scenery. There is a huge population of eagles in the area. We see two nests and 10 birds along our river cruise.

Tidal bore rafting is available daily from May until the end of October, with that final month rumored to be the best time for thrill seekers. And while boats go out every day, the best time to go is the three days before and after the full moon each month because of its effect on the tides.

There are four companies along the river. I ended up at the oldest of the group, Tidal Bore Rafting Park and Cottages which has been in business for 28 years.

They have a restaurant, cottages, pool, and a Russian spa on-site, making it tempting to stay for a few days of rapid rides. They can technically take drop-ins but you’ll be taking a risk that you won’t get a seat, so try to book at least a few days in advance. Especially if, like our boat mates, the call of the Fundy tides is the siren’s song that leads you to Nova Scotia.

This trip is part of our #NSJoyRide series. We went on an epic road trip along Nova Scotia’s Bay of Fundy thanks to the fine folks at Nova Scotia Tourism. They covered the costs of our week-long road trip.  We hope you love following our tidal adventures. Check out more in this series here: