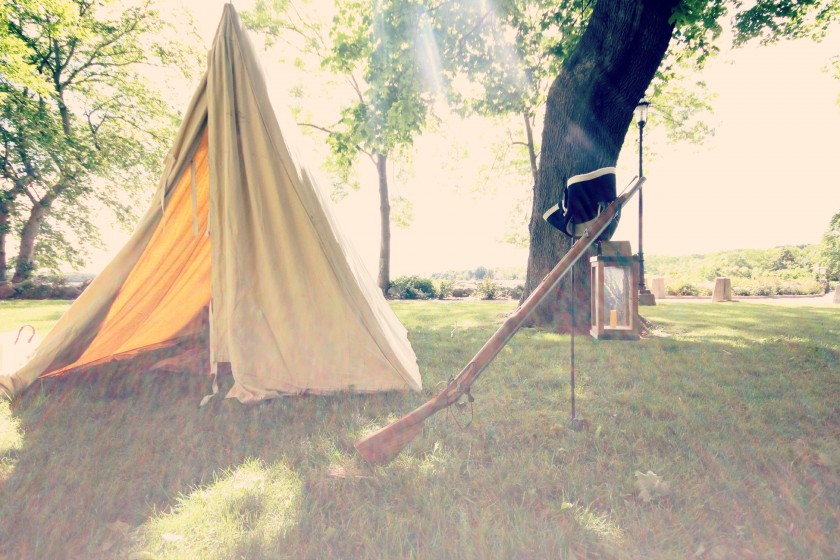 If you’ve ever been to a festival in Nova Scotia like Privateers Days in Liverpool or Founders Days in Shelbourne, or maybe to one of our historic forts like Citadel Hill, Louisburg or Fort Anne in Annapolis Royal, you may have noticed people dressed in period pieces going about the day to day lives of people from days gone by. I’ve always assumed these were staff or local volunteers putting on costumes for the weekend. Then, two years ago, we were invited to spend the evening with the Kings Orange Rangers. We didn’t know much going into it – just that we’d be sleeping on straw in the middle of a public park in Liverpool. That’s where we learned about re-enactors. I can tell you that Gillian and I were significantly mind blown when we learned about the re-enactor community. There is a large network of people who spend their summers (though it isn’t specifically contained to the warmer months) traveling to various historic sites and celebrations reenacting life from different periods of our history.

One such local group is The King’s Orange Rangers, in honour of the regiment that had been based at Liverpool during its early privateer years. For Privateer Days they set up camp, a full-fledged 18th century military camp, at Fort Point, exactly where their namesakes were over 200 years ago.

I suppose I should have paid more attention when Gillian had mentioned we’d be sleeping in a municipal park where camping isn’t normally allowed. Sleeping on straw takes a little adjustment, and while we learned a lot that first year, we were thrilled to be invited back for a second taste of re-enactor life. This time, in costume. Upon arrival, we met Gayle. Gayle and her husband have been re-enacting for many years, and she shared a bit of her experience with us through a lesson in 1780s dressing.“This was your underwear,” Gayle tells us, holding up a linen shift for Drew and a lighter shift for me. “There were no separate britches, men just kind of tucked everything in and around.”I almost toppled over as Gayle expertly squeezes me into a corset. Then came the layers.

“Women wore a minimum of two petticoats.”  She hands me layer after layer of linen fabric. She expertly folds and pins and tucks until I looked like a proper 1780s woman. Drew had a slightly easier time getting into his getup. He looked so handsome and we felt much more at home with our linen tent, straw bed, and pewter mugs now that we were properly dressed. I can see why people fall in love with the re-enactor lifestyle. We drank our tea from oversized pewter mugs (HOT!) and dined on whole meals prepared by campfire thanks to the 84th Regiment cook Sue, or “Cooky”. Cooky has a true talent for camp cooking. The meals were delicious and hearty (you have to try Scotch eggs, here’s a recipe: http://allrecipes.com/recipe/scotch-eggs/). Tea in a pewter mug gets REALLY hot! Donning 18th century clothing is a living history lesson, nothing was without a practical purpose. And we learned that sleeping on straw can actually be quite cozy.

The King’s Orange Rangers, like other re-enactors, take what they do quite seriously, while having a lot of fun with it. A lot of thought and care goes into making the clothing so that it is as authentic as possible, and they scour auctions, flea markets and yard sales for camp equipment that you could’ve found in the late 1700s. It’s very much a community, extended by regularly getting together with other regiments from near and far. It’s really a wonderful example of how no matter what interests you, there’s likely other people who are into it, too.