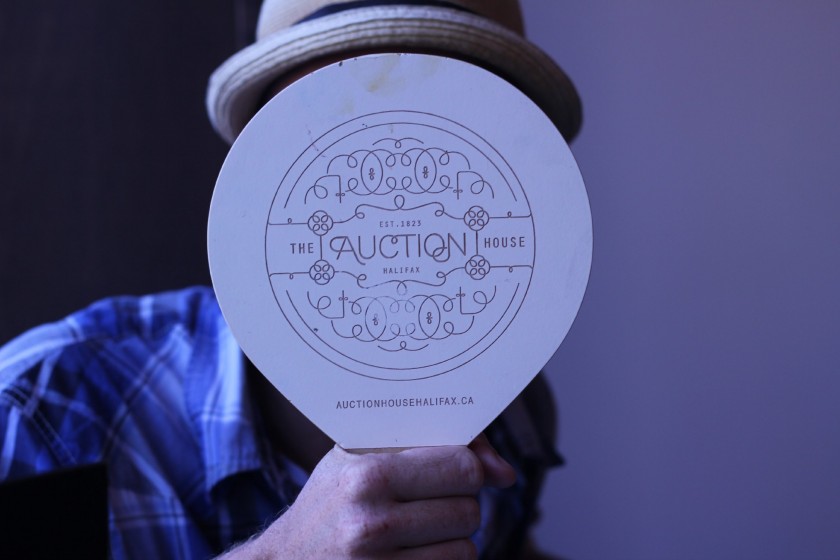 The Auction House is an English pub in downtown Halifax. It was just a little less than a year ago that the space made its six week metamorphosis from a loud, sweaty nightclub extension to a proper pub.

I remember the previous space well, or, as well as anyone else who went to university in Halifax does. I spent many an end of the night in this particular section of the Dome, grabbing a slice of pizza and my coat before heading home for the night. 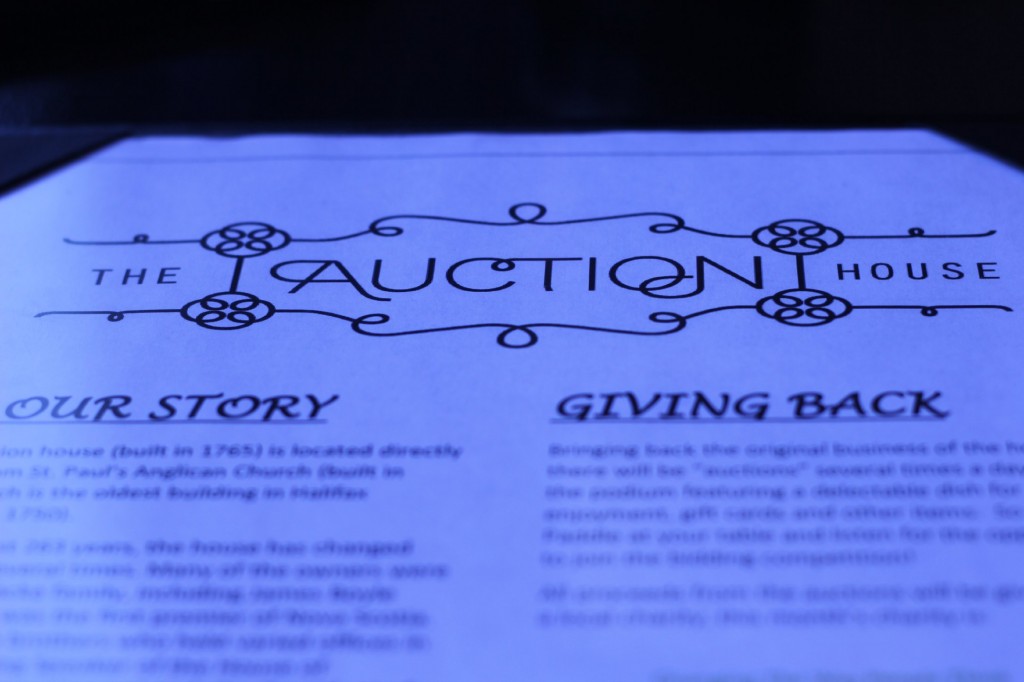 Boy, how things have changed. The Auction House now calls on a history much older than mine, back to 1898 when it was the Maritimes’ largest auction house.  As a tribute to their auctoneering past, the pub holds daily auctions, inviting diners to bid on everything from appetizers to full meals to gifts. 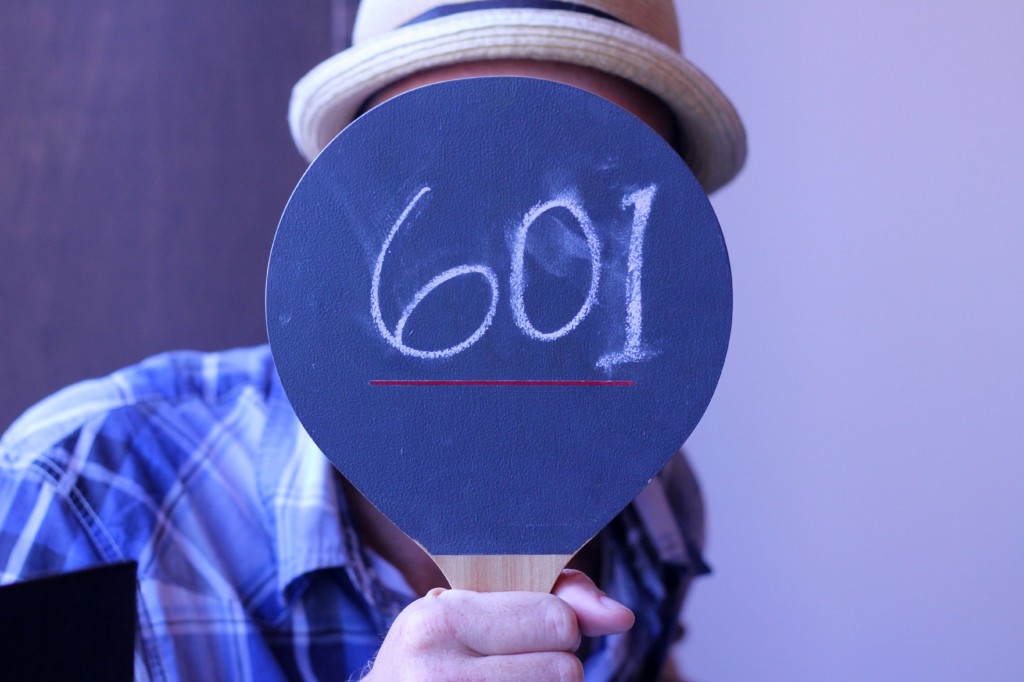 Every penny from those auctions goes to charity. They choose a different charity to support each month.  Groups can apply on their website, with past funds raised for everything from breast cancer research to the NS Sports Hall of Fame to Litters and Critters. 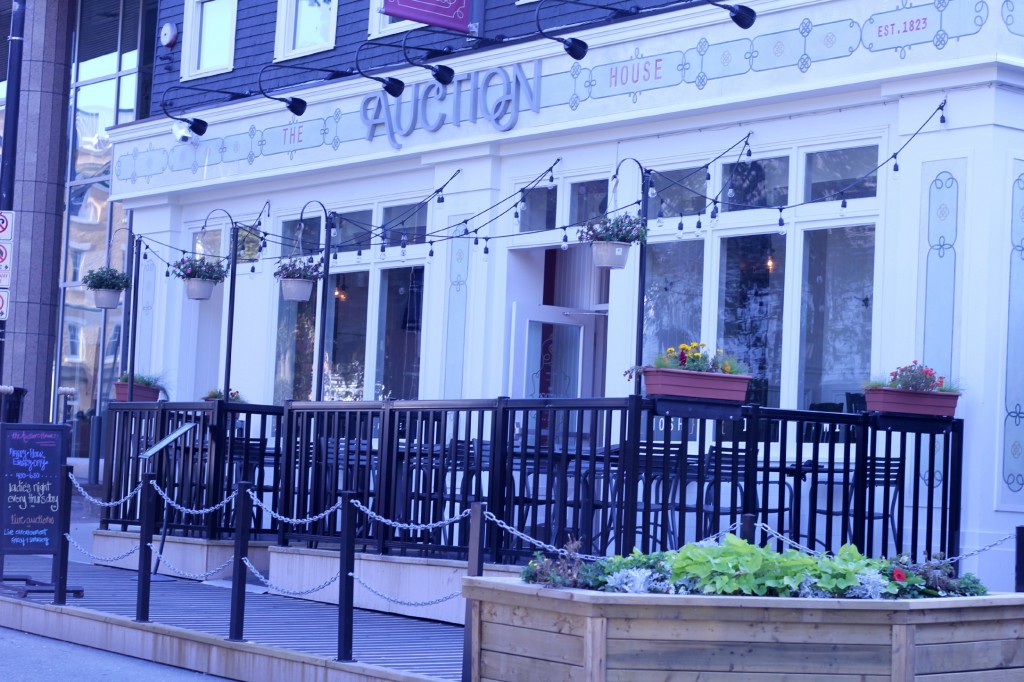 The pub itself is a North American take on an English pub.The front of the restaurant is flooded with light from the tall glass windows along the street. The bar is made of shiny rich dark  wood. At the back is an auction and entertainment area, a second bar, and a row of colourful cozy booths that now fill the space. The restaurant is big, so you don’t feel like you’re on top of anyone (another stark difference from its former tenant). 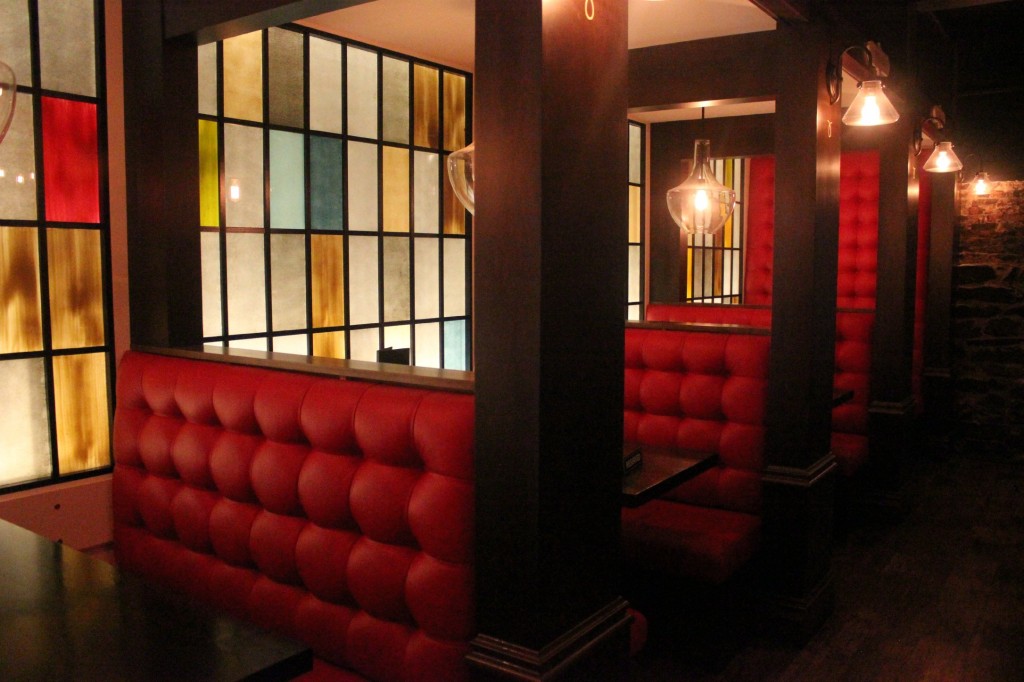 Gone are the days of cheap commercial beer, dollar drinks and pizza. In their place, 26 beer on tap, under a quarter commercial, with four more “big guys” being squeezed out by micro replacements come fall.

The rest of the taps are a rotating selection of the regional craft beer scene, with a few west coast craft breweries like Granville Island rounding things out. 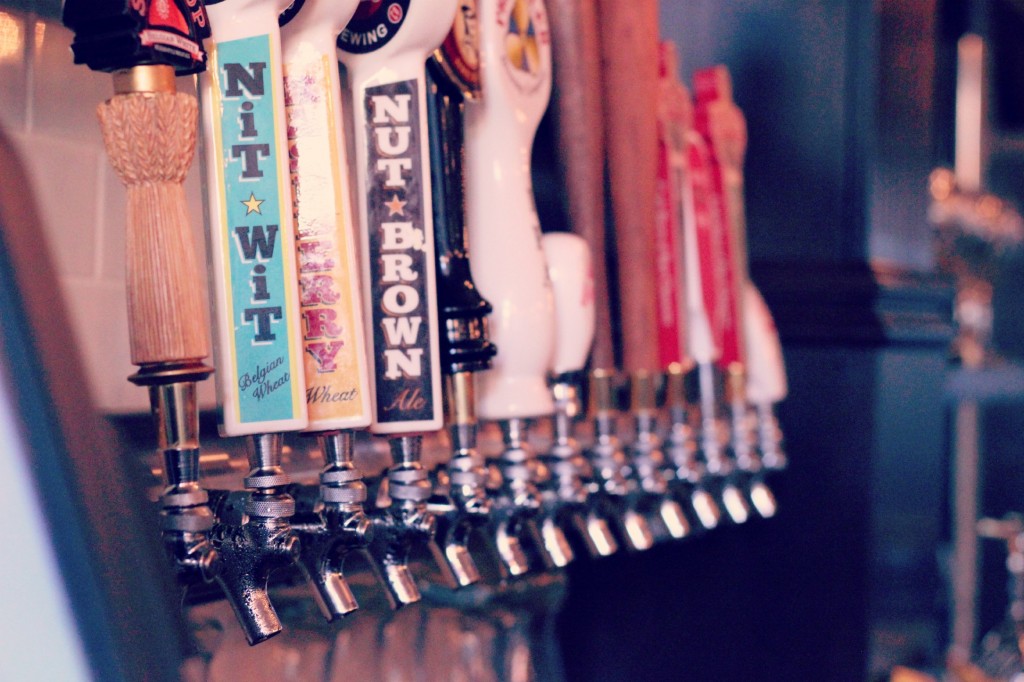 “We have one of the biggest tap line ups in the province, other than Maxwell’s.”

Nathan, the new manager at The Auction House, embodies much of the same character as the pub. He’s young, laid back, charismatic, and easy to talk to, and he’s clearly passionate about great food and craft beer. And that passion and personality extends to the rest of The Auction House staff.

The menu at Auction House is big but manageable. Still, I was glad not to have to make any difficult choices when it came to ordering. Nathan invited us to dine (on him), so in turn we asked him to pick the menu. We wanted to taste the stand out items and get a sense of what The Auction House does best.

We started with two beer cocktails – The Auctioneer for me and The Nova Blue for Drew. Both tasted great but we especially loved The Nova Blue, which is a tribute to Oxford, Nova Scotia’s world famous blueberries. In addition to having Oxford blueberries in the mix, it also had Pump House blueberry ale. It was very refreshing and not-too-sweet, like a fizzy blueberry iced tea with lemon. 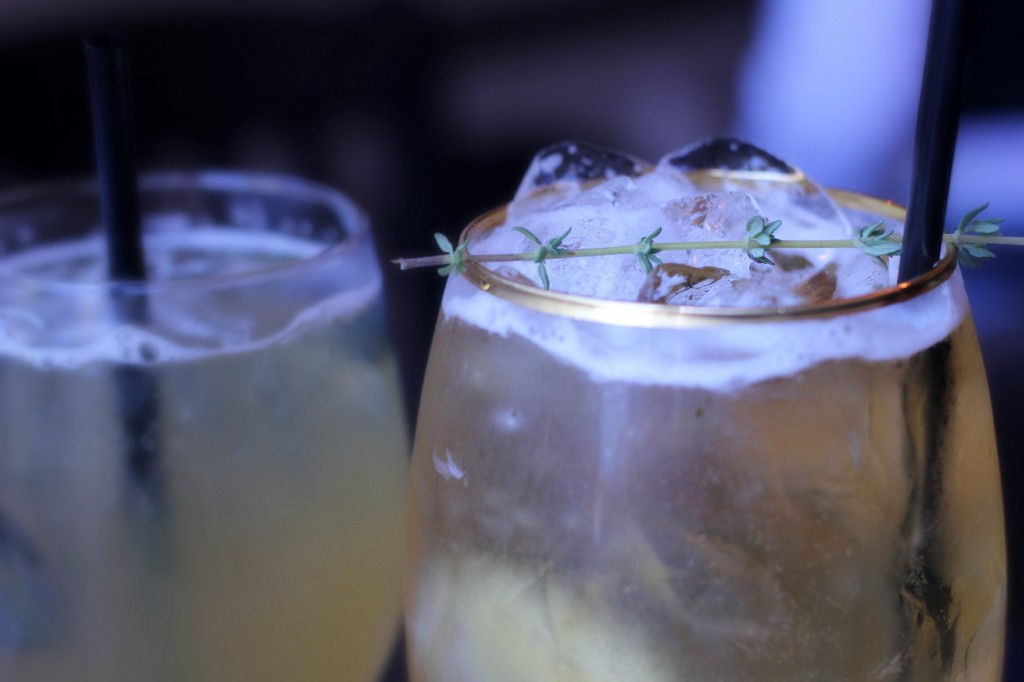 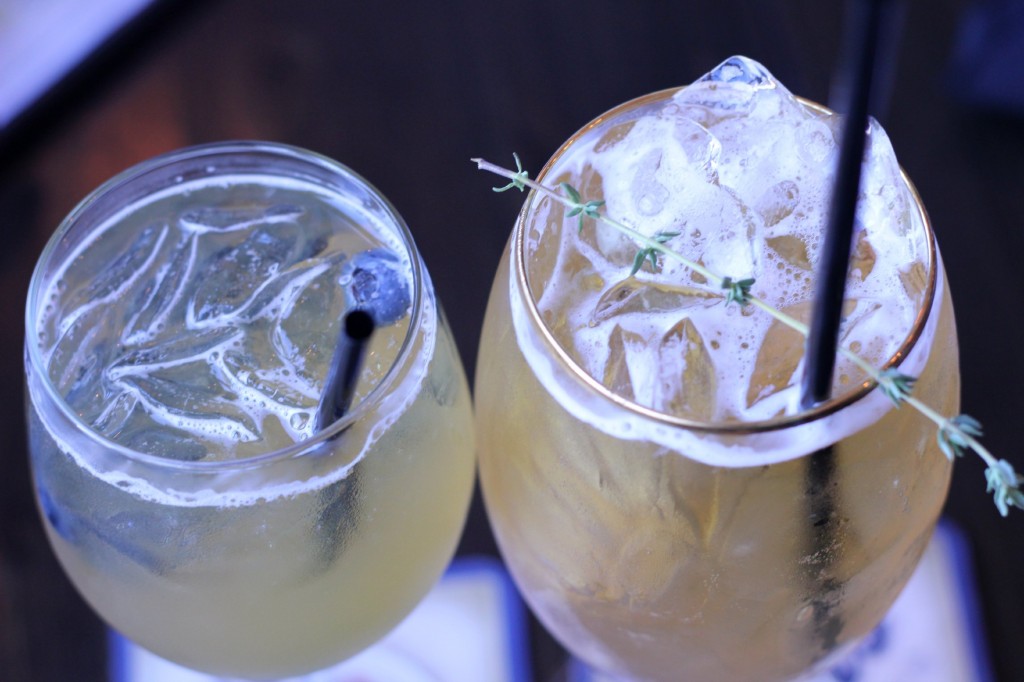 Then came the starters. I got the tomato basil and garlic mussels (GF) while Drew got the cheddar stout dip. The mussels are one of three options currently on the menu, but come fall the other two will be coming off.

“They’re all good, but the tomato basil and garlic are the clear winner,” Nathan says. 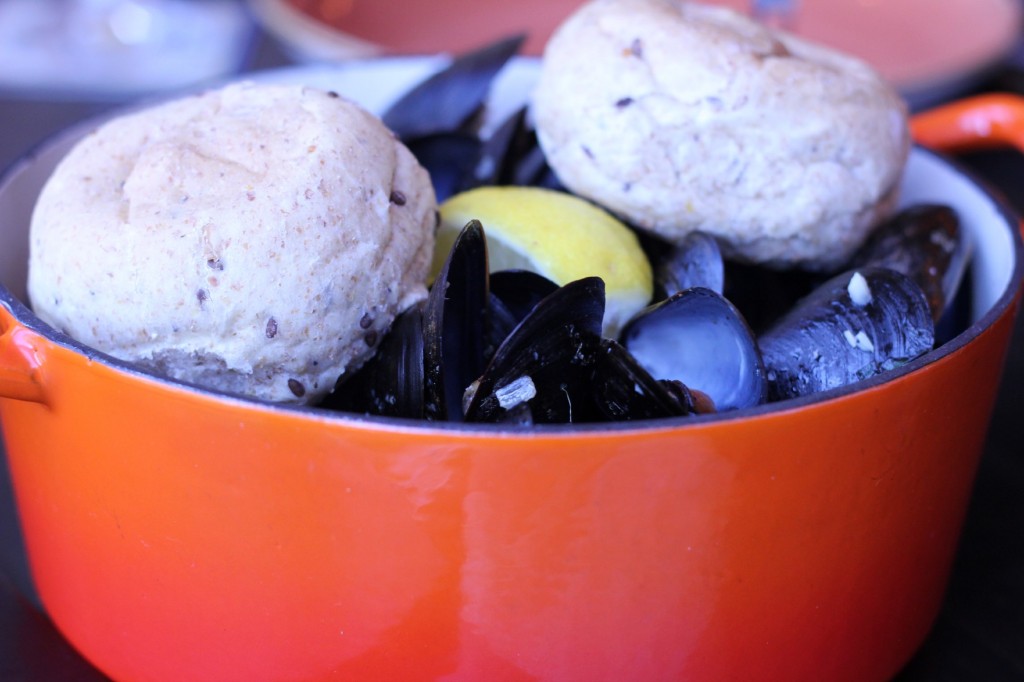 The sauce was great – classic and fresh, though the mussels themselves were a little dry. That didn’t stop us from devouring them, though. I also helped Drew out with his stout dip, a warm treat made with aged cheddar, cream cheese, bacon and Garrison Nut Brown ale and served with pita bread and nacho chips. 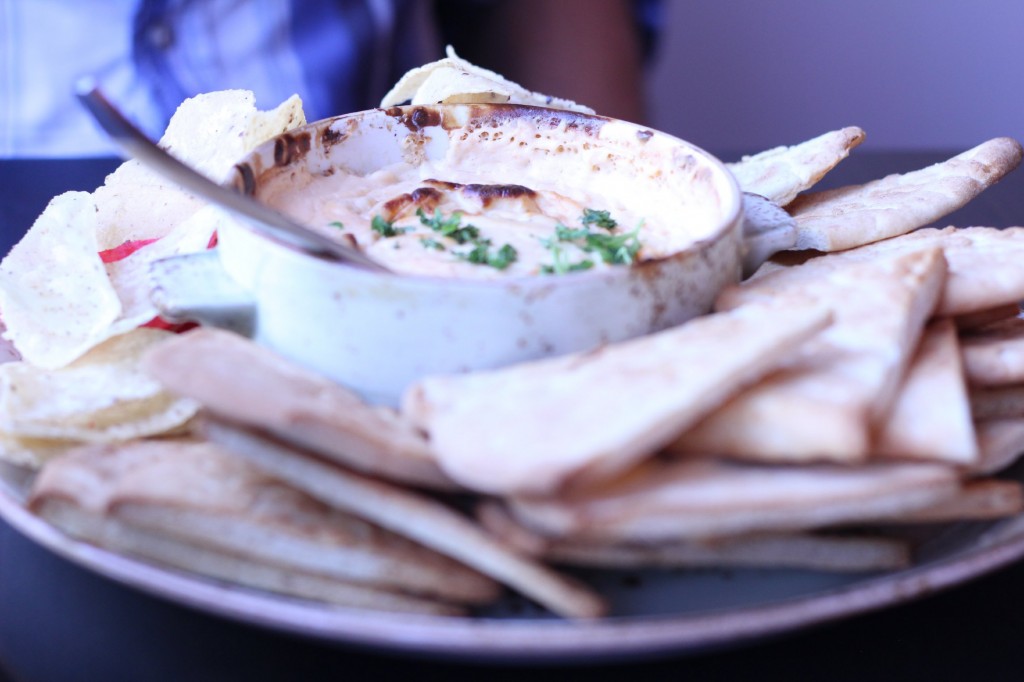 Let me repeat. It was cheese, more cheese, and beer. It was DELICIOUS.

For mains, Drew had the Cuban Sandwich and I had the Shrimp and Sausage Jambalaya (GF).  It was hands down my favourite of the night, a dish I’d come back for again and again. It had a nice even heat and tons of flavour.  It was also HUGE. When I got too full, I systematically hunted out every last piece of delicious chorizo sausage before packing up the remainder to take home. 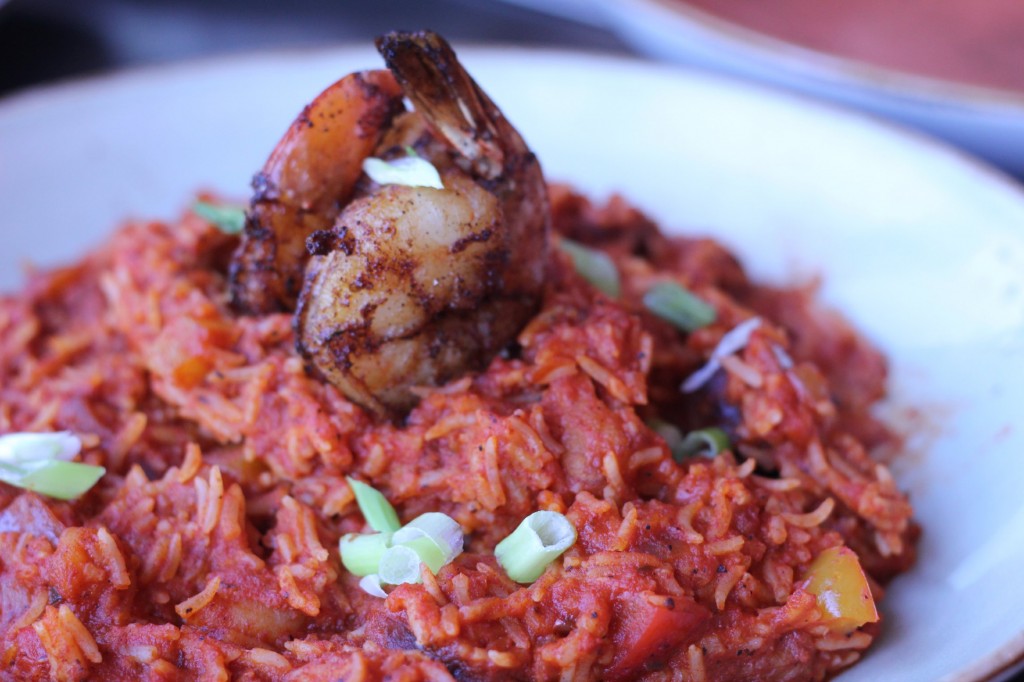 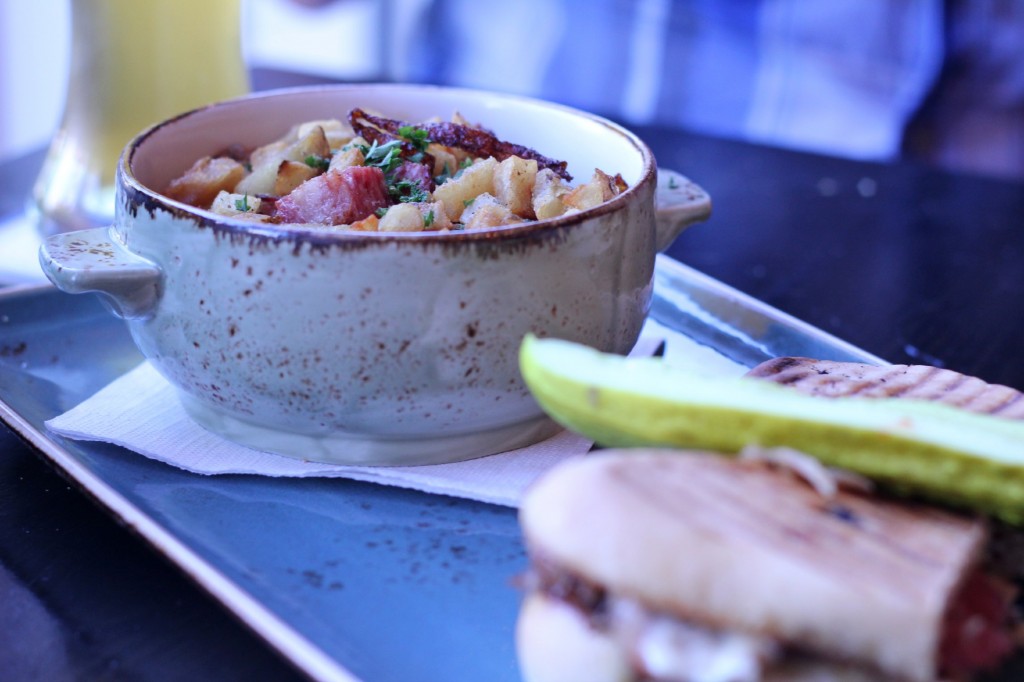 I hope it is one of the dishes that makes the cut, because the menu is about to get a little overhaul for autumn. Nathan hopes to make the new offerings more reflective of UK offerings (something we’re especially excited about following our recent UK Roadtrip). Expect curries, spicy noodles, and maybe even mulled wine!

“I was in the UK last winter. Everyone’s walking around with red mouths from the mulled wine.”

We didn’t get to see an auction in action (we’ll have to come back) but we did get to see Nathan and another staff member get doused in ice water for another good cause.  The Auction House donated to ALS on behalf of their good natured staff, and they called out sister restaurant Five Fish to step up to the plate next. 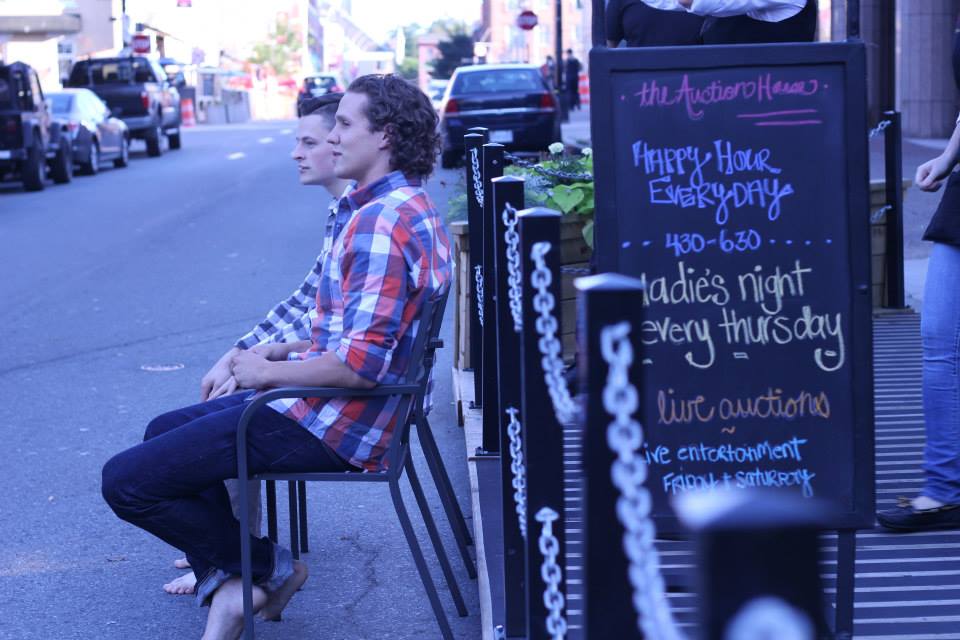 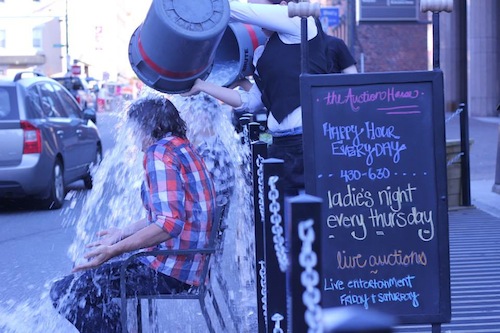 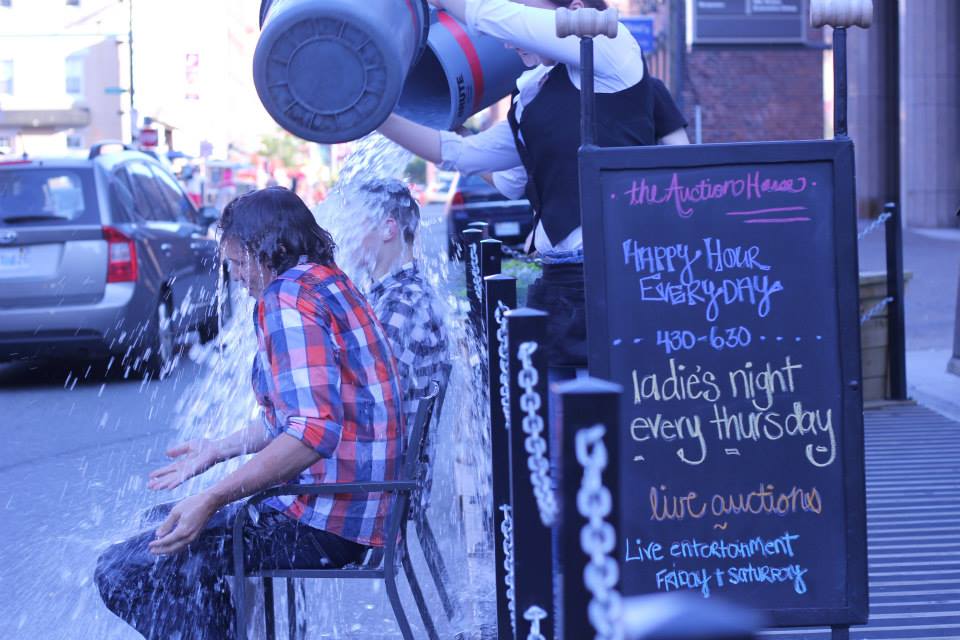 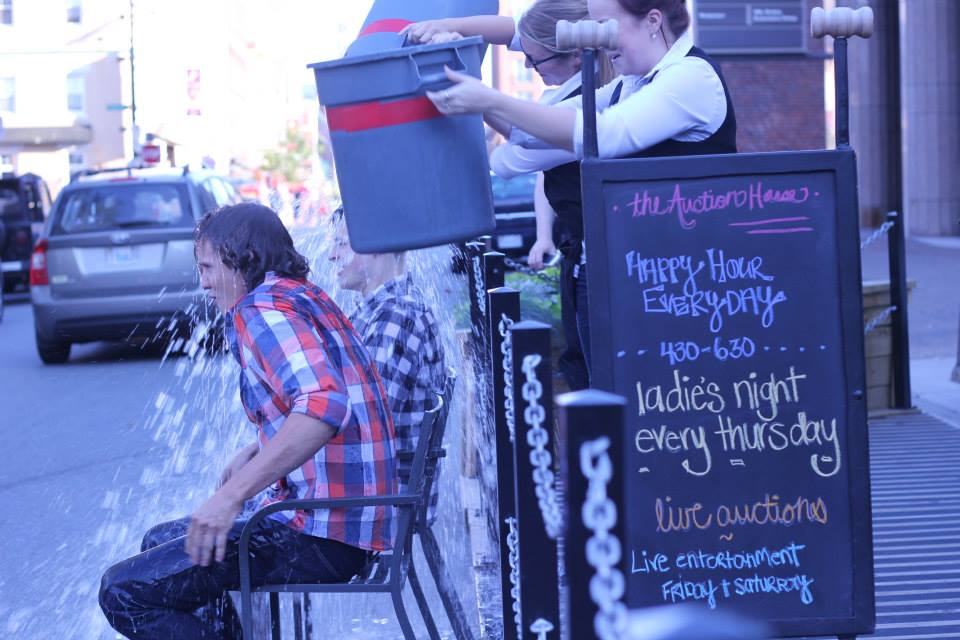 The music was the kind of tunes that make you want to sing along. Which I did. Loudly. Drew chimed in, too. Not together, more awkwardly apart as he stared out the window and I sang to my spoon. 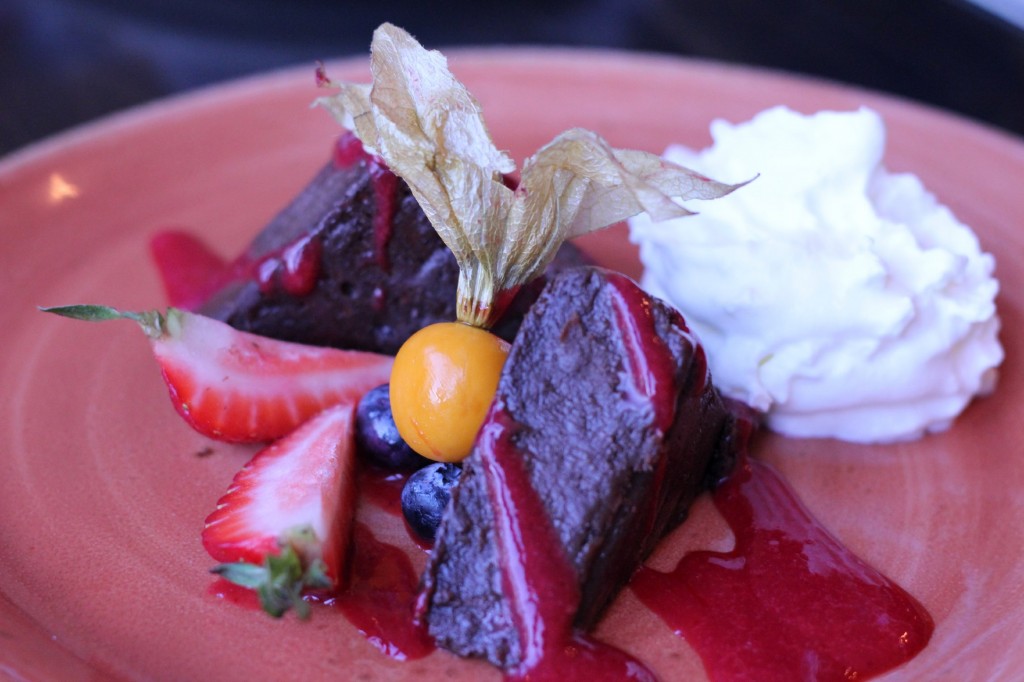 We had a really good meal, and a really great time. Our dinner came on the heels of our return from the UK, where we spent a fair bit of time in actual english pubs, so we liked the nod to the English and the anticipated changes to the menu. The addition of a dart board, board games, crisps, and some ‘Real Cask Ales’ would take this cozy craft beer and comfort food spot to the next level. 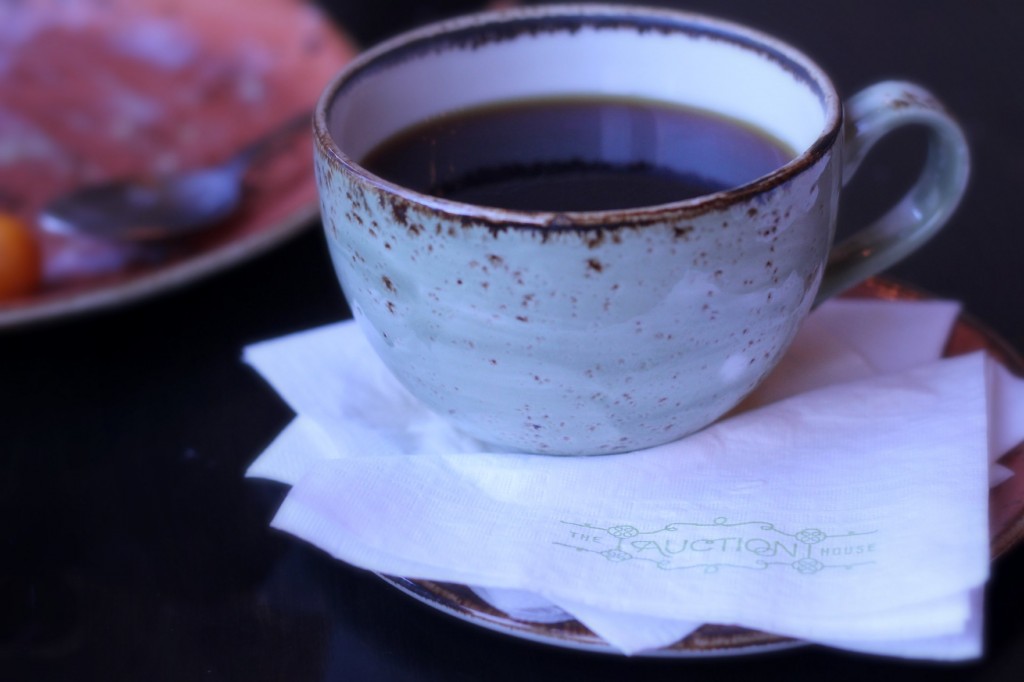 And while the Auction House sits on stark contrast to the Dome, I couldn’t leave without smashing a drink on the floor. For old times sake (and because the table was slanted – or so Nathan very politely told me).