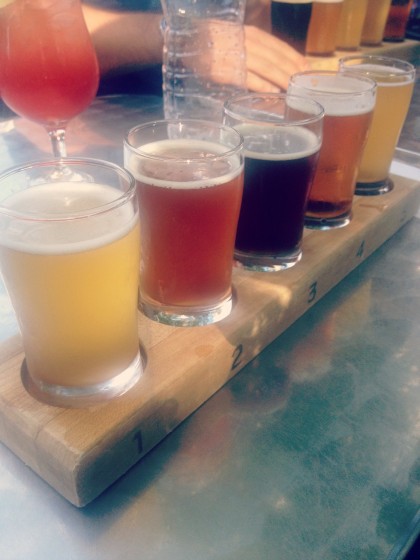 I recently had an opportunity to spend a weekend in my other favourite city in Canada, Montreal. There is a lot to love about this city. Great culture, wonderful & improving active transit infrastructure, terrific beer, excellent food and afternoons spent on a terrace.

This is the closest you will get to the European joie de vivre in North America. On this trip, I made a return visit to a couple past favourites and tried out a few new discoveries.

A few years ago, Gillian and I tried both the steak and salmon tartars at Holder, and we’ve been raving about them ever since. It had to be the first place I returned to. Without hesitation, I ordered the salmon tartar to start. I would have had difficulty choosing between this or the steak tartar, but I knew I’d be getting my fill of red meat the next night. 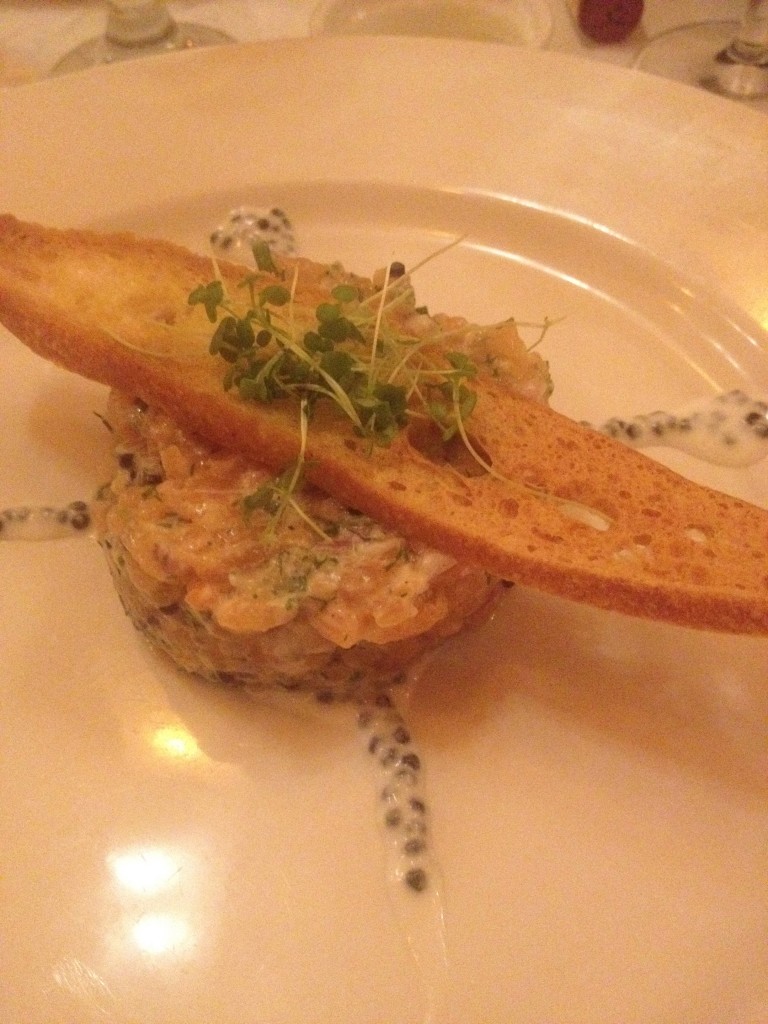 This played a part in my choice for my main, as well. I chose the vegetarian cous cous option, and was quite pleased with it. The tartar was just as good as I remembered it. I paired this with a Cheval Blanc beer. This is pretty much the go to beer in Montreal, vastly superior to the so-called domestic choices you’ll find in many other places.

The next day I had brunch at Boris Bistro. It was a beautiful sunny day, perfect for sitting on the enclosed, open air terrace. I thoroughly enjoyed my espresso while people-watching and waiting for my food. 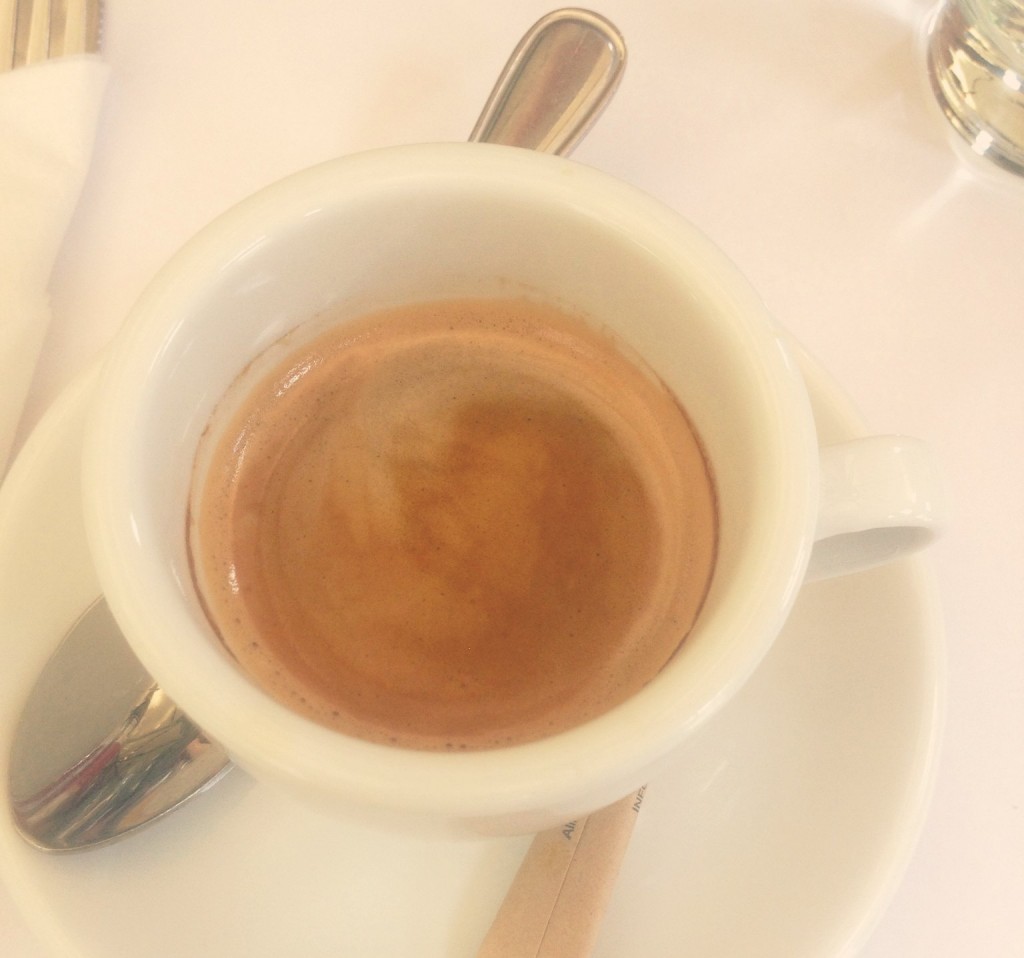 The poutine-style patatas bravas with aioli was alright but the endives, zucchini, beet, walnuts and blue cheese salad was delightful. The service was fantastic and my water and bread basket were never empty for long. 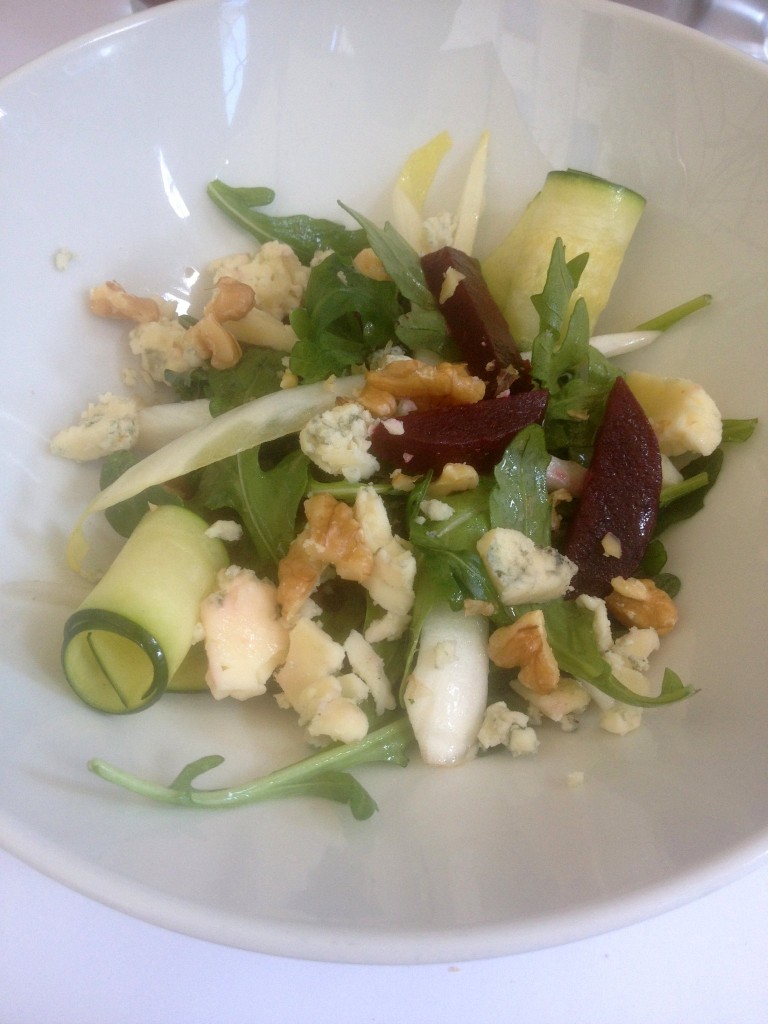 We passed the late afternoon on the terrace at Benelux. This is one of Montreal‘s several brasseries or brewpubs. The big screen TVs inside had drawn a large World Cup crowd. The chalkboard had a list of the 12 beers currently on tap, ranging from Belgian to porter to sour to pale ales. I spent a couple hours going through two flights to sample most of the 12. 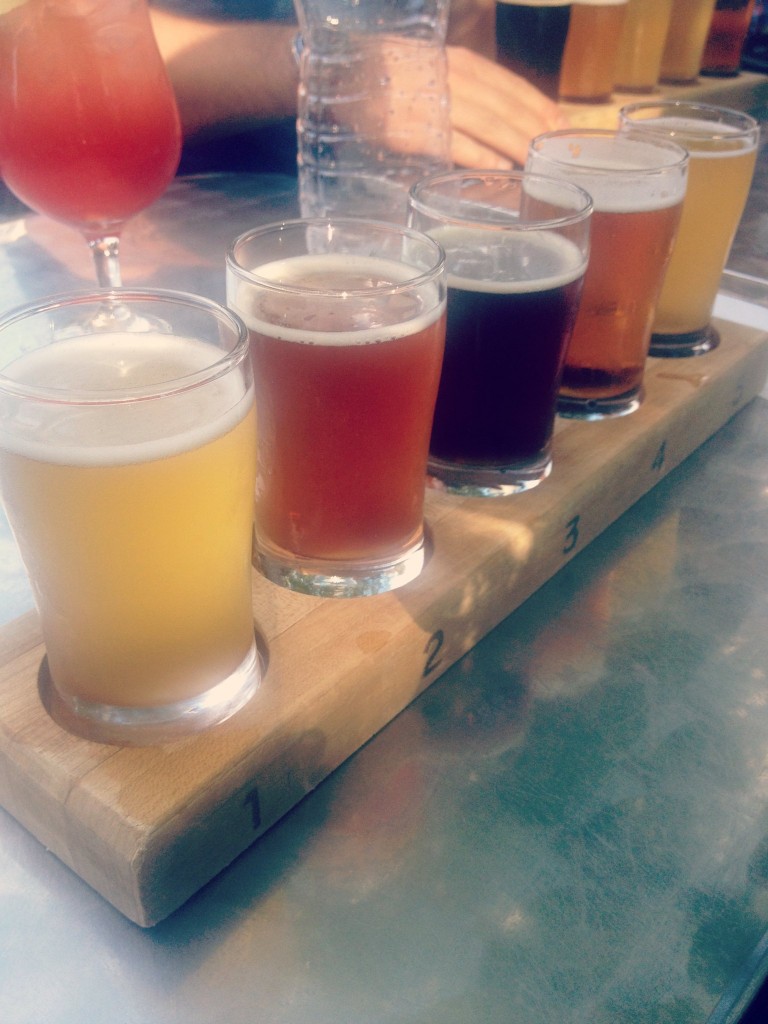 To be honest, I wasn’t that fussy about most of them, but the Matinada, a 5.5% pale ale stood out. It was a very enjoyable brew with a satisfying hop profile for a hot summer afternoon. 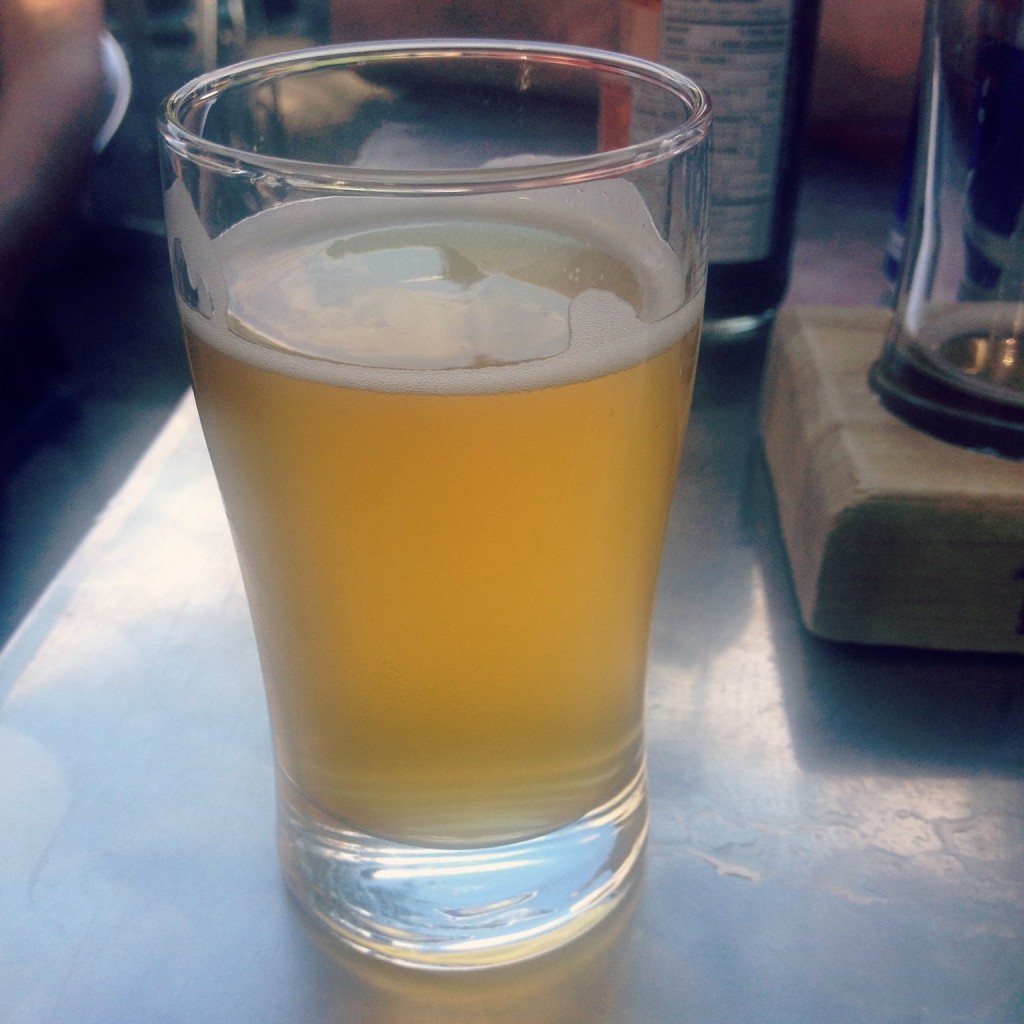 Supper that night would indulge anyone who has a hankering for some red meat. Gibby’s Steakhouse might not have the most sophisticated name, but was this place ever an enjoyable experience.

Located in Old Montreal, it has the beautiful stone walls that are characteristic to this area of the city. There is a very European-feeling open air courtyard for outdoor dining and a cozy downstairs dining area with low ceilings and warm lighting. It was very easy to imagine that I was on a vacation in France. 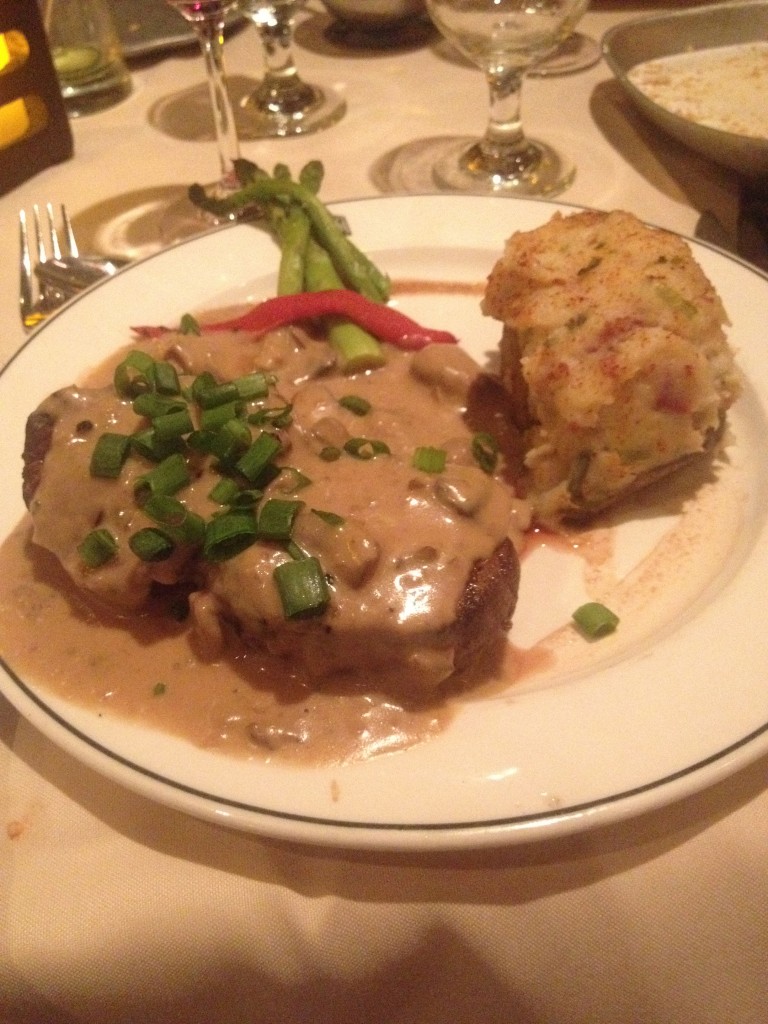 I went all in here, ordering the mignons of beef Diane, a delicious, hearty plate of tender meat with mushrooms, French shallots, cognac and black peppercorn sauce. If this were to be the last steak I were to ever have, I’d have no regrets.

Breakfast the next morning was to be my last meal in Montreal on this trip. As far as I am concerned, breakfast foods can be eaten at any time of the day. Equally, there is nothing wrong with having poutine for breakfast in Montreal. 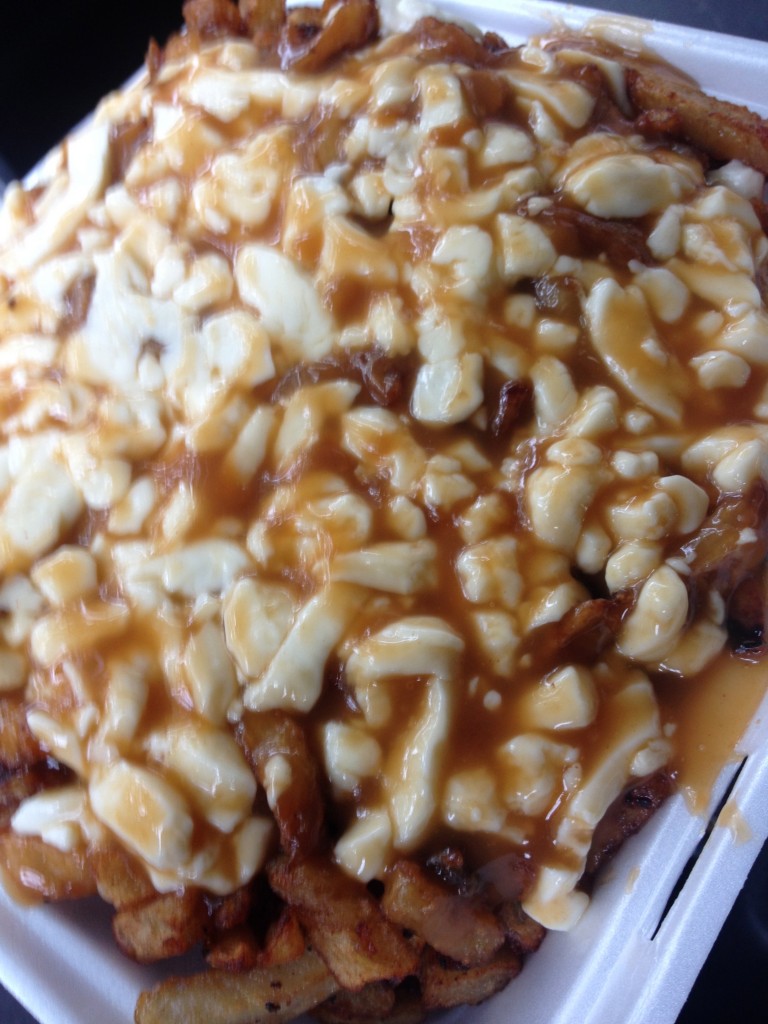 I went to La Banquiste, which is open, and serves both breakfast and poutine, 24 hours a day. La Banquiste is very colourful, and features an impressive variety of poutine options. I’d been there before and had tried one of the spicier ones, but this time I just wanted a classic serving of gravy and melted cheese curds over French fries. I may have mis-stepped in ordering the large because I ended up getting it to go and it lasted me for lunch and dinner, as well. 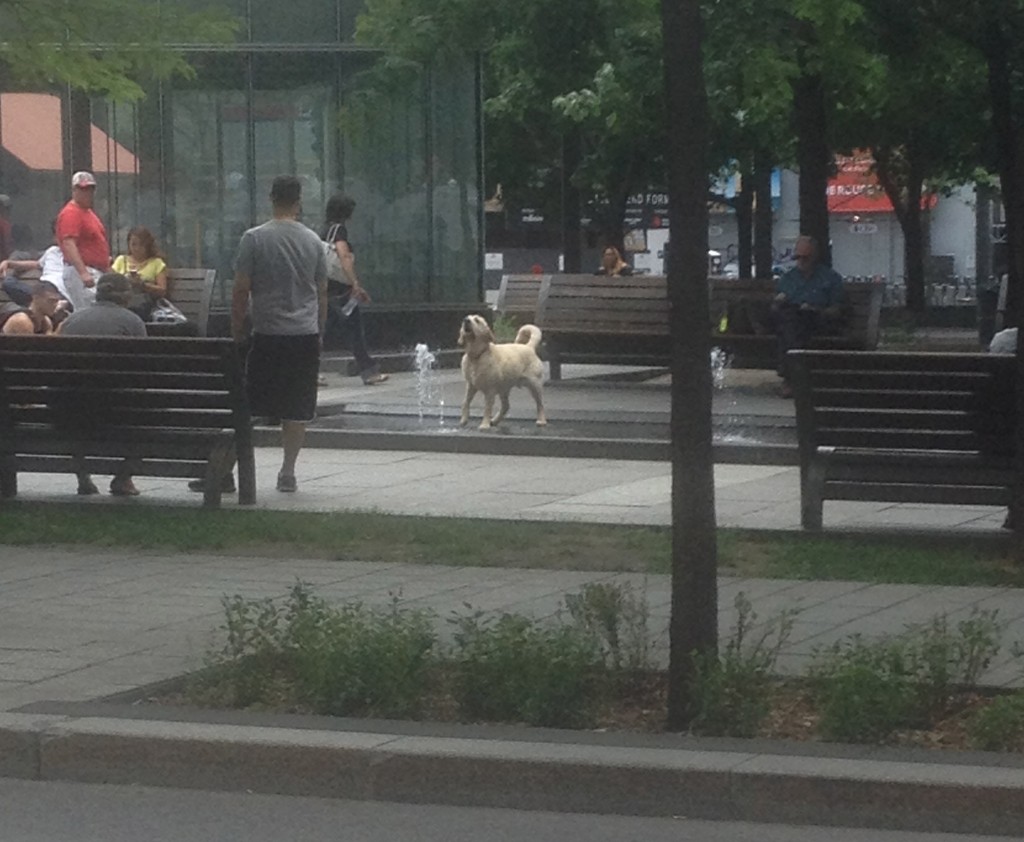 This dog was having a Montreal culinary experience all his own, barking at the park fountain… 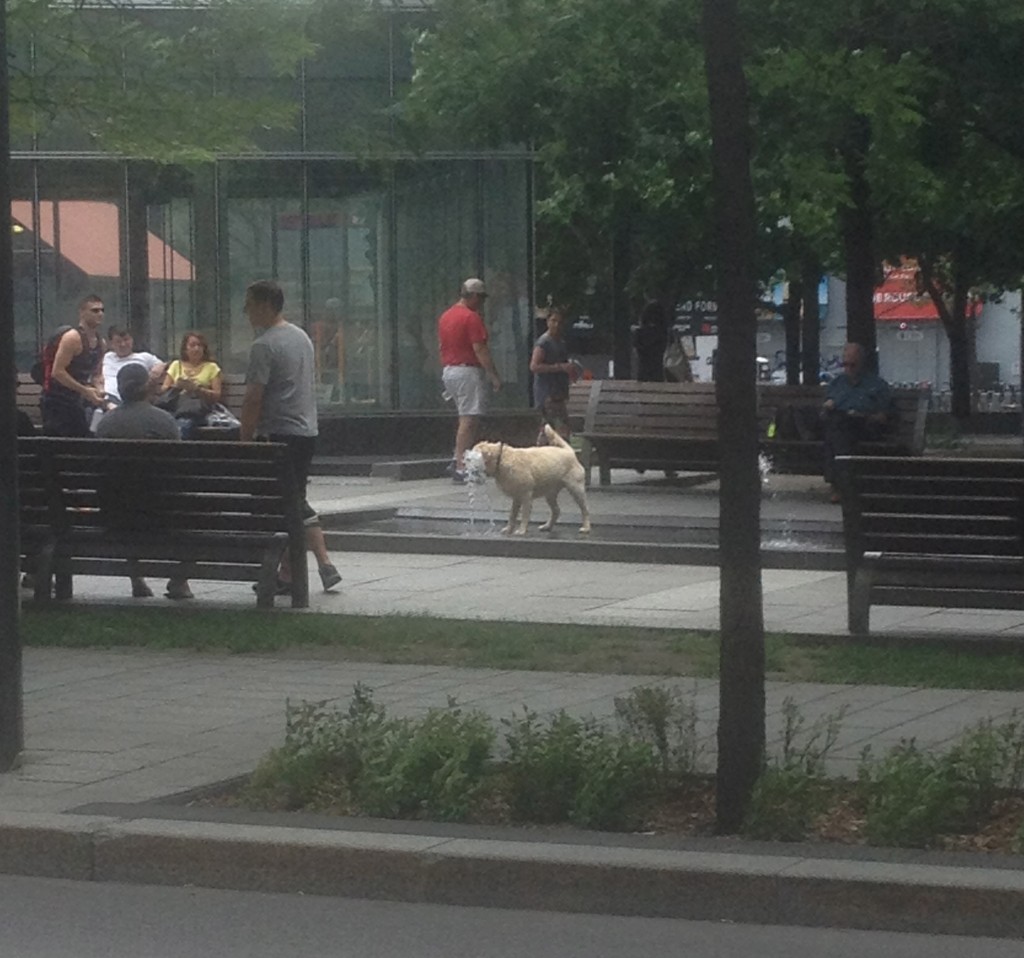 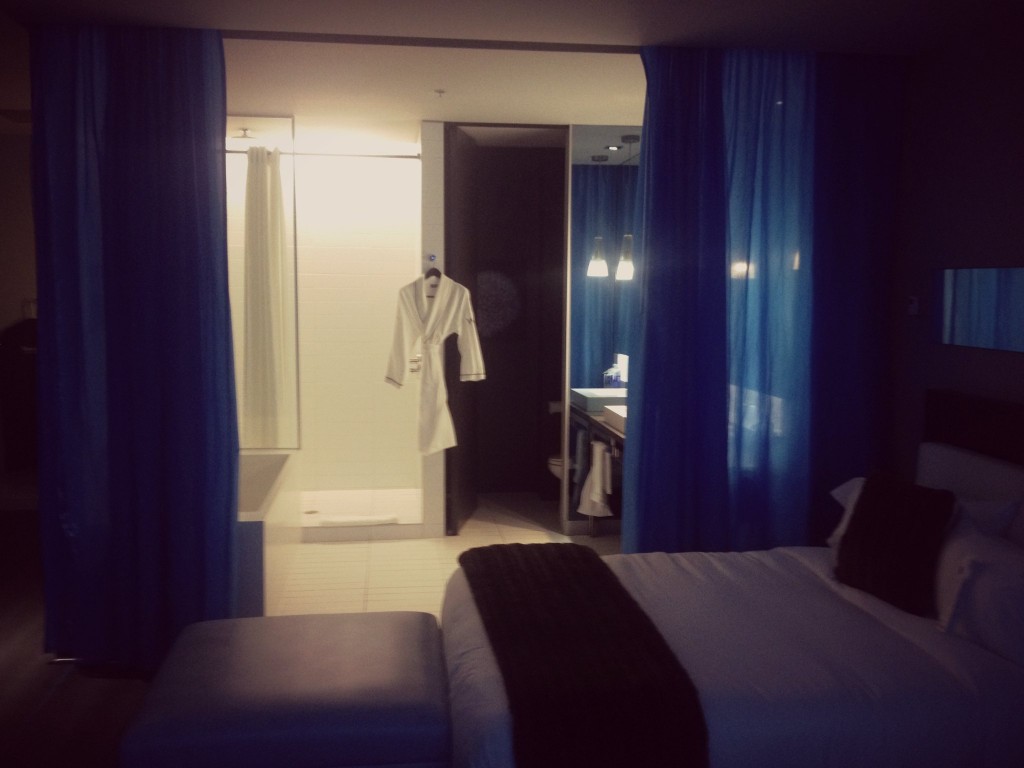 With so many culinary offerings, it can be hard to narrow down where to go in only a couple of days. On this trip I didn’t even get a chance to have any of Montreal‘s famous smoked meat or bagels, or visit my favourite brasserie, Dieu du Ciel. All that means is that there are plenty of reasons to go back. (Editors Note: This time, with Gillian…hint…hint)