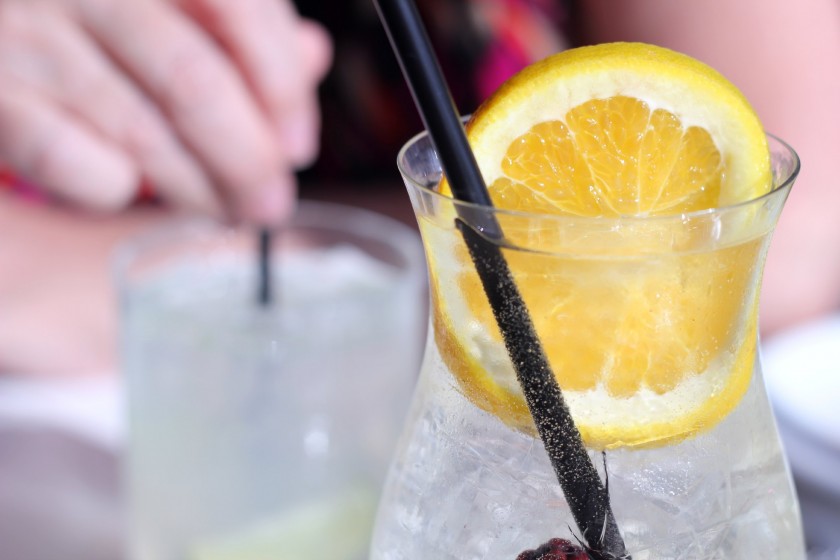 Usually when we visit a brew pub or craft beer bar, Drew and I order a sample tray of everything and split the lot. But at Novare Res, I’m greeted with 16 pages of carefully selected craft beer from around the world. There is also a Dog Fish Head tap takeover going on. Our server presents us with a second list with about another 25 options. My dad and I settle on six. They don’t do sample trays at Novare Res, but they do have ‘half pours’ – half the original pour size for half the original price. My dad loves red and brown ales (Garrison is his favourite on both counts) and I love IPAs so I work with the server to curate a list we’ll both love. There’s a Festina Peche that’s poured from an interesting looking set of clear tanks, Namaste, 61 minute IPA, Indian Brown Ale, Immortal Ale, and a cilantro wheat beer that I can’t recall the name of. Novare Res is located in a parking lot. They have a big secluded patio outside, but we sat in the dark brick restaurant, a laid-back, cool, beer-filled cave of a place. You can see the more than 300 beer varieties on their website.

And since Dad and I had had our little beer adventure, Mom and I needed our own escape. We chose Congress Squared. Congress Squared is the on-site restaurant in The Westin Portland Harbourview. It opened in December, but has already been receiving rave reviews from local food writers. We were there for happy hour (which is actually three hours – daily 4 – 7) so Mom got the $8 Patron Margarita and I got the white wine sangria. Both were sippers. Both were good. We both agreed that the Marg was the superior choice. We paired our drinks with two small plates – duck fat fries and fried cheese curds with house-made tomato jam.  The fries were so crispy and rich, with soft mashed potato insides. They came with house-made ketchup (Heinz, who?). Our server there was one of the best, friendliest people I’ve met on the road, telling us all about Portland, how he came to be here after years in New York, and why he fell in love with this food-lovers’ city.

We all needed a little break (and a little nap) before dinner. El Rayo Taquerita  was a bit of an arbitrary decision. When traveling with a dog, food options, even in a city with as many restaurants as Portland, is a little complicated. We’ve been using www.bringfido.com to find pet-friendly places since seeing a sticker for the site at Gritty’s. The app did us a solid. El Rayo Taquerita is a dog-and-kid-and-wallet friendly gem. The atmosphere reminded me of a family BBQ – Kids and dogs happily welcomed and free to wander.

The menu was a-la-carte style, with most menu items around $4. That’s right, $4. And the menu is so gluten free that they use a symbol to denote which items HAVE gluten rather than which items have not. We arrived to a 50 minute wait but the atmosphere was good, the night was warm, and the food looked and smelled delicious. So we stayed. We cozied onto a bench and ordered a passion fruit margarita to share and watched as the menu paraded in front of us.

First kids, then later full grown adults, played a hacky sack game in the onside games area in the middle of the patio. The kids were better. We all ordered light, and regretted that we hadn’t come to the restaurant hungry. The soup of the day was delicious as it was unique – a plantain soup with spicy sweet pumpkin seeds and sour cream. Dad also ordered soup alongside a loaded quesidillia. We also got nachos, which were good, though I wish I had ordered some guac to go with them. We saved the best for last – The Top of The East. The lounge sits on the 15th floor of The Westin Portland Harbourview. It’s the place to go for cocktails, bubbly, and apps, but the piece de resistance is the floor-to-ceiling glass windows that wrap the full lounge. There’s no people watching here. I loved watching as everyone in the bar sat eyes glued to the skies. You can see all of Portland from Top of the East. In fact, on a clear day, you can see as far as Mount Washington. It was also the pretties place to appreciate a little rain. They had a great cocktail and appy list, including ‘Temperance Cocktails’ (alcohol free and delish), and a full list of muddled drinks.

Want more Portland dining ideas? There are over 200 places to eat in this port city. Check out a few more in our first Portland post, Eating, Drinking, and Running in Portland.