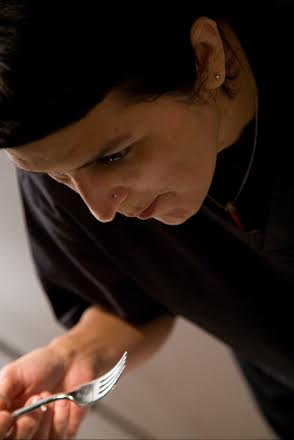 “I would like to live 200 years so I could live in every country at least for a little while.“

It isn’t every day you take a call from a Michelin-Star chef. But today, that’s exactly what’s happening. Cristina Bowerman, owner of Glass Hostaria, writer of From Cerignola to San Francisco and Back, and Michelin-Star chef, is talking to me by phone as she commutes to her Rome restaurant by cab. I’m a little speechless.

Cristina hasn’t always been a chef. She studied to be an interpreter in university then did a 180 and pursued her law degree. She moved from Cerignola, Italy to San Francisco where her creative side took root.

“I grew up thinking I wasn’t a creative person. Then, one day, I realized I was.”

She first found her creative side as a graphic designer. That creativity eventually led her to the kitchen. She started a catering company on the side called The Two Skinny Ladies.

“I have always been attracted to cooking. I was the person who cooked for friends.”

At the time, cooking was still more of a hobby for Cristina. It was an article on famed chef Elena Arzak and her growing realization of the disparity between male and female chefs that led Cristina to further pursue her culinary passions. That, and a little fate.

“I flipped the page and there was an advertisement for a new cooking academy in Austin offering the same program used at Cordon Bleu. I was living in Austin at the time and I thought, this is destiny.”

And though it was destiny, it took her a bit of time to make the leap. At the time, Cristina had a house and a good job, cooking was more of a pastime, not yet a pursuit.

“It was not dangerous but a sacrifice. Took me about a year and a half to save up because I knew I was not going to make any money for about two years.”

Today, Cristina is one of the world’s best known chefs. She owns Glass Hostaria in Rome, a Michelin rated restaurant. In 2008, Glass Hostaria was also given two forks from the Gambero Rosso Guide.  She is also a published author (From Cerignola to San Francisco and Back) one of only 10 female Michelin Star chefs in the world. I re-find my voice when I hear that nagging little number.

“Is that a common thing in the culinary world? That men are more recognized than women?” I ask.

Cristina tells me she was the only woman to get her Michelin-Star in 2010. She thinks there is a need for more female role models in the culinary world. She tells me that many of the recognized female chefs find their way into the career due to a family connection to the culinary arts.

“I was one of the first woman in the group who decided to become a chef.  I don’t have anyone in my family who runs a restaurant, and no family history of work in the culinary world. It was a complete choice.”

Cristina hopes to help with that shift. She is committed to being a positive role model for other would-be female chefs. Today, Cristina once again calls Italy home, but she still holds a deep love for travel, something that is reflected in her cuisine.

So it’s no surprise she’s excited to visit Nova Scotia. She tells me she’s only been to Canada once before, a trip to Montreal two years ago. It is so exciting to hear her talk about our food. She told me how surprised and excited she was with how much food was available here in our province.

“The list of ingredients that Chef Alain sent me is so rich and inspiring. You have so many crustaceans and fruit and vegetables.”

And she is especially excited about the rhubarb.

“Sometimes we get rhubarb here but it isn’t a great rhubarb. I’m looking forward to tasting the real thing.”

And if you want to taste Cristina’s take on our provincial bounty, you have only one night to do it. On June 27th, Cristina will cook up a mouth-watering menu at the Stadacona Drill Shed. The military warehouse will be transformed into a five-star dining room for the occasion. Here’s what’s on the menu:

That tantalizing four course meal will be set to the sound of award-winning artist Carleton Stone. There are still a few tickets left for this spectacular night of food and music.  You can get your tickets at rightsomegood.ca.

We’re working with Right Some Good to spread the good food news about their upcoming event in Halifax. They’re supporting our content as a featured partner. We couldn’t be more excited to be working with an awesome event based around local food. All opinions and words in this piece are our own.